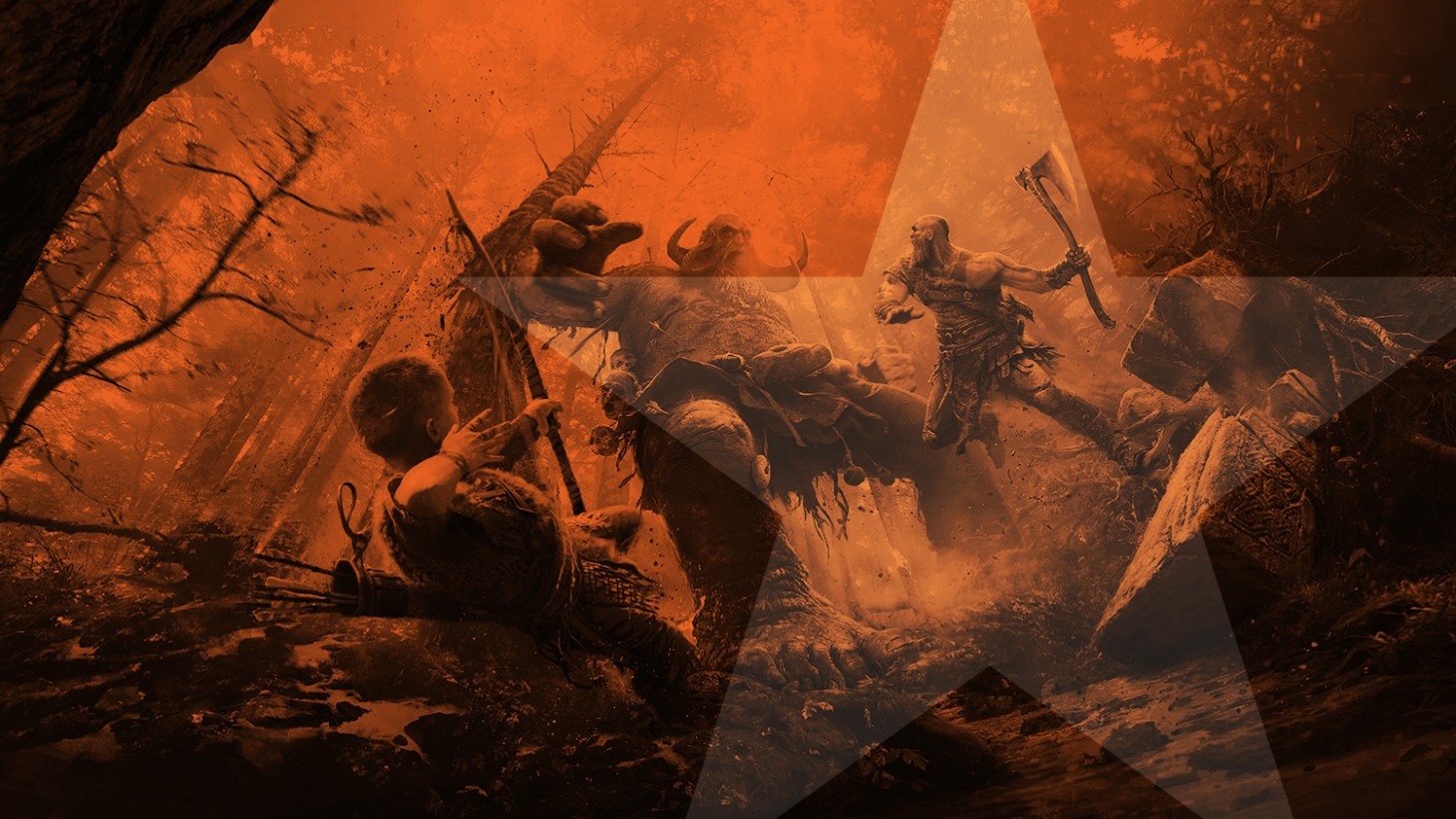 Each year, the Game Informer staff reviews a ton of games. Despite hundreds of games coming across our desks each year, only a select few are able to obtain special commendations reserved for the highest scoring titles. Games that earn an 8.5 or 8.75 obtain a Game Informer Silver award, while a score ranging from 9 to 9.5 earns that game a Game Informer Gold award. While most of the best games of the year fall into that range, the most elite titles ascend to the next level to earn a Game Informer Platinum award (9.75 or 10 score).

To help you keep track of the best of the best, we've compiled all of the top scoring games of 2018 here. Check out the games we've thought are the best of the year so far, and if you want to learn more, you can read the full review with a simple click-through.

Be sure to click on the blue game titles to jump to the full review text.

“The Enemy Within is uneven, but its highs make for a superb adventure where you are held accountable for your choices.” – Javy Gwaltney

“To think, Sonic Spinball was onto something all of those years ago. Yoku’s Island Express is delightful and fun from start to finish.” – Andrew Reiner

“Mooncrash is Prey at its best, featuring enough challenges and gadgets in a well-designed playground to keep you coming back for more.” – Javy Gwaltney

“Fans of Splatoon’s single-player content should look no further than the exceptional Octo Expansion.” – Brian Shea

The Awesome Adventures of Captain Spirit

“This inventive tale can be uplifting one minute and disheartening the next, but it strikes a consistent and compelling tone.” – Joe Juba

“The gameplay is as engrossing as ever, but it and the marquee Master League mode are still looking for a few changes to take the series to the next level.” – Matthew Kato

“Hunting dangerous quarry is a thrill thanks to a preparation-focused loop and fun crafting, though the lack of substantial additional content makes the value of a return trip questionable.” – Javy Gwaltney

"Welcome improvements to the general gameplay and franchise mode make this the best NHL in years, but the team still has a lot of work to do with modernizing its career mode and cleaning up legacy issues." – Matt Bertz

"While the title can be grindy at times and includes some frustrating maps and encounters, the core systems underneath are a joy to tinker with for hours." – Daniel Tack

"If you hate Lego games, this isn’t going to change your mind. For everyone else, this is a delightful return to form which hopefully serves as a reference for TT Games’ future projects." – Jeff Cork

"After years of iteration as a minigame and in beta, Gwent has come into its own as a great card game. It emphasizes keen decision-making over chance, and a great back-and-forth buildup ratchets up the tension across multiple rounds." – Suriel Vazquez

"If you’ve never played these games before, I can’t recommend them enough. From a historical standpoint, you can clearly see the foundation for Insomnaic’s Ratchet & Clank series in each level." – Andrew Reiner

"The feeling of amassing a giant collection of monsters and customizing your team never gets old, and the timeless turn-based combat is still fun to this day. Shoddy motion controls aside, Let's Go is a great time whether you’re a die-hard fan or a newcomer to the series." – Brian Shea

"Artifact is absolutely not for everyone, but it excels at creating a crazy strategy cocktail pulling from every bottle on the shelf. For card game fans, Artifact is not to be missed." – Daniel Tack

“With an exceptional career mode and improved gameplay on top of its predecessor’s already-strong offerings, UFC 3 is the best MMA game ever released.” – Brian Shea

“Don’t come to Frostpunk if you want sunshine, unicorns, and happy outcomes. This is a bleak game about making difficult decisions to survive inhospitable conditions.” – Matt Bertz

“The arena and its deadly lasers may be hectic, but the rapid-fire fun is constant.” – Matthew Kato

“Wolfenstein II on Switch is the real deal, offering an only slightly degraded version of the bloody and memorable adventure.” – Javy Gwaltney

“It may not break new ground in comparison to the preceding expansion, but Battle for Azeroth provides a wealth of activities for players to enjoy and experience.” – Daniel Tack

“Guacamelee 2 nails the Metroid formula while including its own style of combat and a great sense of humor.” – Kyle Hilliard

“Saying that you can have just as much fun in the shop as behind the wheel seems weird, but in the case of F1 2018’s career mode, it’s true.” – Matthew Kato

"The new gear system is a cool mechanic, and Capcom’s level design feels classic in all the right ways. Mega Man 11 taps into the series’ past, but also serves as a solid foundation for the Blue Bomber’s next 30 years." – Ben Reeves

Return of the Obra Dinn

"Return Of Obra Dinn is a surprisingly hardcore detective title with a surreal bite, and one that shouldn’t be missed by anyone who loves a great challenge." – Javy Gwaltney

"Whether you’re a newcomer or a dedicated fan, the latest retelling of the story of souls and swords is a captivating one." – Suriel Vazquez

"Dusk might look and feel like a Quake mod, but it's so polished it feels modern. Anyone with even a hint of nostalgia in their bones for classic shooters should dive headfirst into Dusk." – Ben Reeves

“Iconoclasts plays well, looks great, and has some strong level design, but the unexpected highlight is a narrative that examines topics like religion and environmentalism in a well-realized world with real consequences.” – Kyle Hilliard

“Shadow of the Colossus is a masterpiece, and developer Bluepoint has done a fantastic job bringing it to a new generation.” – Kyle Hilliard

“Thanks to its robust battle system, intriguing character-switching puzzles, and beautiful storytelling, Crossing Souls is a fantastic adventure that goes beyond its nostalgic trappings.” – Javy Gwaltney

“Where The Water Tastes Like Wine shines with its incredible voice work, well-told stories that take on lives of their own, and many profound moments.” – Elise Favis

“Whether you’re building a camp on the island or searching for clues to your son’s whereabouts in dark and dangerous caverns, The Forest is a fantastic horror thrill ride.” – Javy Gwaltney

“The reward loops are addictive and continually open up new things for the player to explore.” – Andrew Reiner

“Kiwami 2 is more than a great remake: it’s the best this strange, wonderful series has to offer and it shouldn’t be missed by fans of action or RPG titles.” – Javy Gwaltney

“The most well-rounded sports game on the market once again.” – Matt Bertz

“This is a fantastic return for a series that has been struggling with its identity. Large maps and interesting abilities give you the freedom to explore different strategic opportunities, and your ingenuity pays off with enticing rewards.” – Joe Juba

"Astro Bot is an excellent platformer with great motion controls, and its execution in virtual reality creates something fresh in a well-worn genre." – Kyle Hilliard

"The long and short of it is that this is simply Diablo III on Switch. It’s the same great game, featuring frenzied action, alluring gameplay loops, and few technical compromises." – Jeff Cork

"The presentation is such a natural fit for the gameplay, and it adds an unexpected layer of emotion. Monstars Inc. and Resonair should be commended for taking a calculated risk and delivering its own unique take on a gaming standard." – Jeff Cork

"Beat Saber is a must-play for anyone interested in virtual reality, but not for the reasons we typically associate with the platform. It won’t make you crane your neck to take in the majesty of your surroundings, but Beat Saber uses VR to place you into the music and taps into your carnal desire to hit things with swords." – Kyle Hilliard

“Dragon Ball fans have plenty to enjoy in single-player, while fighting enthusiasts get a fast, dense game full of options.” – Suriel Vazquez

“Tropical Freeze stands among the best platformers of the last decade. Playing as Funky Kong is great for alleviating frustration or allowing skilled players to breeze through the game at high speed.” – Kyle Hilliard

“Hollow Knight has some frustrations, but the urge to see what’s in the next room is a constantly compelling imperative moving you forward.” – Imran Khan

"Forsaken is deep, mysterious, and vast, three words that echo what players most want from this growing universe." – Matt Miller

"Forza Horizon has long been my favorite racing series, and this installment shows that there’s plenty of gas left in the tank." – Andrew Reiner

“Playable, watchable, understandable, and enjoyable by just about anyone with a pulse, Fortnite is an absolute blast.” – Daniel Tack

“The story shines as brightly as the gameplay – both deliver heart-pounding excitement.” – Andrew Reiner

"A wealth of tweaks and new additions like the World of Light campaign help to keep Ultimate from feeling like a greatest-hits retread." – Jeff Cork

“An enthralling experience from beginning to end, with a mixture of great narrative moments and engaging encounters. God of War is a well-paced adventure that knows when to let the action simmer and when to make it boil over.” – Joe Juba

"Rockstar has once again created a game that redefines the open-world experience. Red Dead Redemption II is a triumph that every gamer should experience for themselves." – Matt Bertz

For more of our favorite games from recent years, head to the links below.