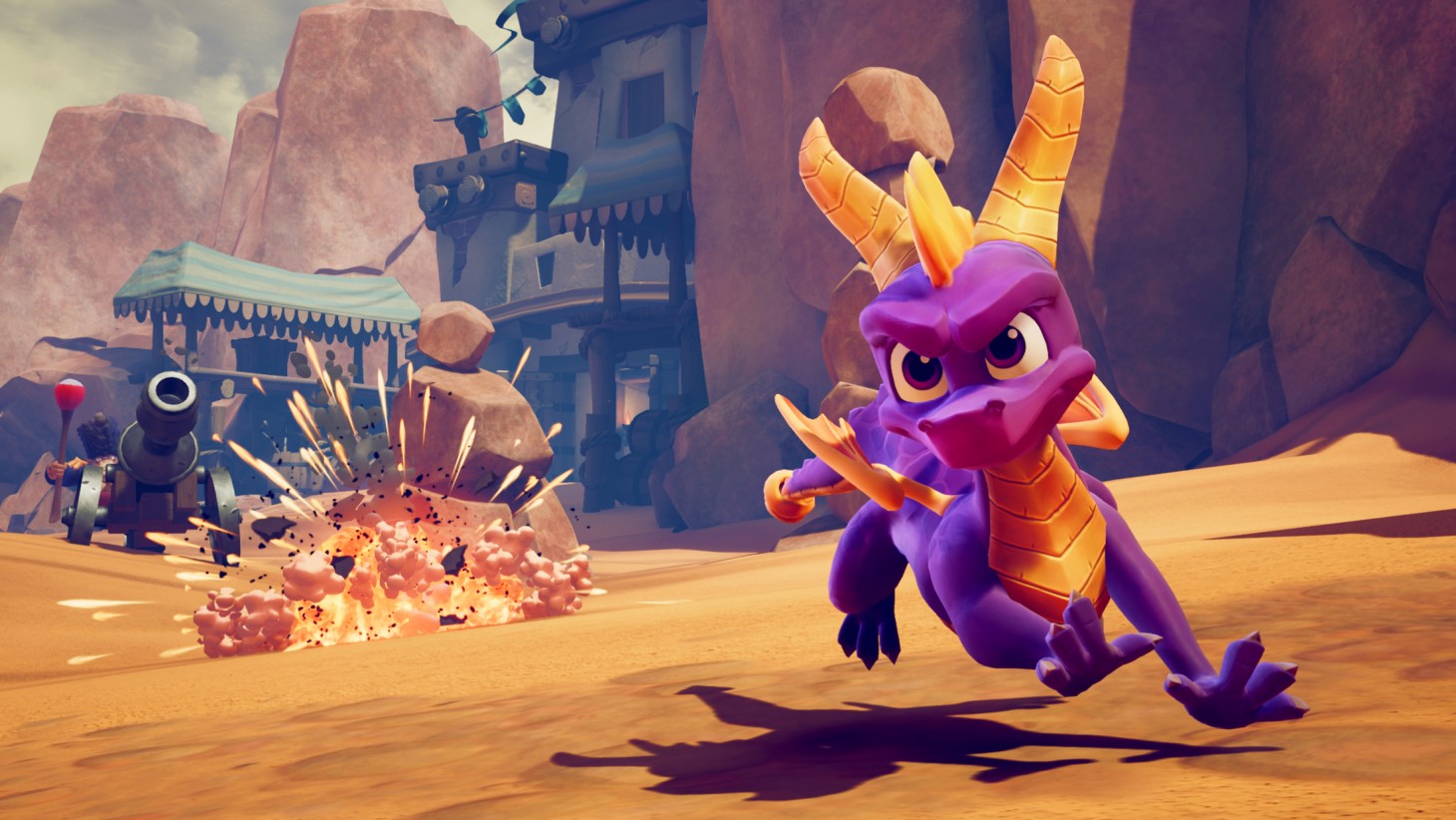 Although Skylanders was red hot, none of Spyro’s adventures hit the fever-pitch of popularity as his first game, 1998’s Spyro the Dragon. The sequels were also well received, but that first game made him a household name. If you missed out on this wild platformer when it first released, developer Toys for Bob is giving you another chance to see why it is such an important game. This singular adventure fueled Spyro’s fire for decades of games and stories, and after playing it again, I see why developers and publishers believe he remains relevant and is primed for another return. 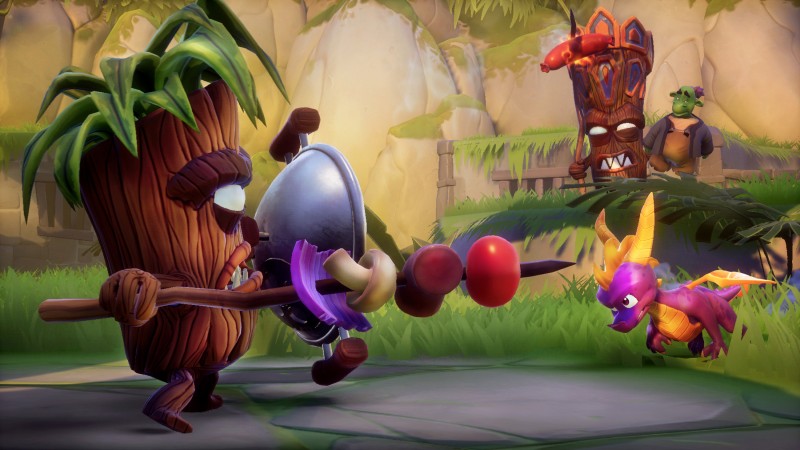 Spyro Reignited Trilogy is a remaster that is faithful to the purple dragon’s original journeys, yet modernizes them to deliver breathtaking graphics and dynamic audio. Last year’s Crash Bandicoot N.Sane Trilogy received similar treatment, but given just how lightly detailed Spyro’s worlds were back in the day, Toys for Bob took more liberties with the visuals.

The result is three games that often look radically different from their sources. What was once a textureless brown blob is now a highly-detailed tree that appears to have a story of its own to tell. Flat green spaces which we assumed represented fields are now beautiful prairies consisting of flowers and individual blades of grass that can be affected by wind and fire. A dog that moved awkwardly now has a variety of beautifully realized animations that visually convey the second it becomes a threat to Spyro. All three games look stunning by today’s standards, but are near-perfect recreations of the originals. This means the level design and item placement are identical to Insomniac's work – and that’s where this trilogy’s age begins to cut through the new coat of paint.

These games are still ridiculously fun to play, but the path through them can be a bit difficult to wrap your brain around at first. In the first game, you don’t really have any guidance to tell you what you should be doing other than reawakening dragons. Insomniac improves upon this formula in the second game, Ripto's Rage, and again in the trilogy’s final act, Year of the Dragon. These three games are a great study of iteration. You can see how Insomniac learned from its mistakes, become more ambitious, and figured out how to create a clear through line for players, while still delivering an adventure that pushes for player-driven discovery.

The main objectives in all three games can be completed quickly, but secrets are fairly hard to find, meaning you’ll likely explore every corner to find well-hidden gems, and experiment with jumps to find a glide point that can reach new areas. All too often you’ll find yourself stumped, clueless where the last gem could be hidden. You’ll need to unearth them all to reach 100 percent completion for stages.

Spyro was born in the wild west of game development when every developer was trying to figure out what three-dimensional gaming would be. From that drive, the Spyro trilogy has a unique charm, and it still holds up well today. Just the general design of Spyro as a character is a game changer. As a four-legged hero, his basic movements offer a different feel and flow than your traditional platformer stars. When Spyro hops along, he can turn easily, just like any other platforming character, but once he puts his horns down to sprint, he takes on the maneuverability of a race car, only capable of making wide turns. Rocketing across the world takes skill, but becomes incredibly satisfying once mastered.

Spyro's horns also deliver unique and satisfying wallops to adversaries, and generate exciting gameplay moments where, at a great speed, the player needs to line up a direct hit or look like an idiot who flies right past the target. Even though Spyro is a tiny dragon, his fire breath gives him a powerful position in the world, imbuing the player with an enjoyable attack that can immediately melt adversaries. As lethal as Spyro is, Insomniac never lets you forget he isn't a fully grown dragon. His foes often tower over him, delivering a great sense of scale that again gives this game a much different feel.

The core move set is the backbone of each game, but the sequels expand upon the gameplay scope. Spyro eventually learns how to flutter, swim, and climb. None of the new moves are as exciting as his base moves, but they add depth. Sure, there may be too much swimming in Ripto’s Rage, but it did shake things up. Insomniac even fell in love with the Tony Hawk games and puts our hero on skateboard for some challenges in Year of the Dragon. Other characters are also playable in this final act. 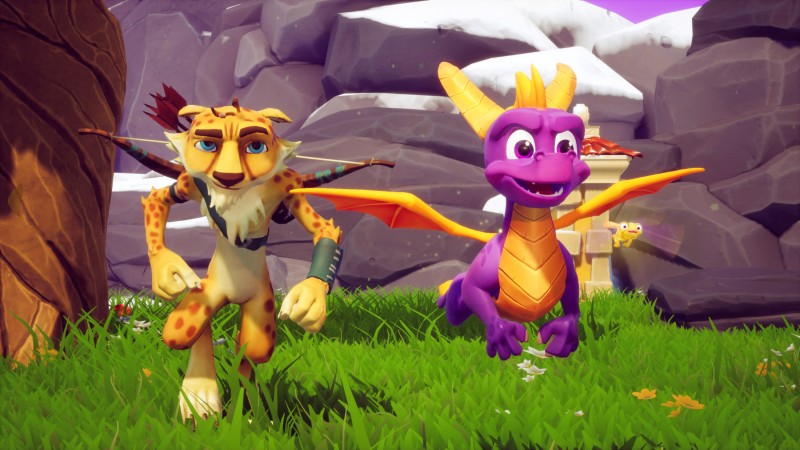 As memorable as these helper characters are, they may not appear that familiar in the remaster given how drastically Toys for Bob improves upon their character models. Hunter the Cheetah is still recognizable, but the same cannot be said for any of the elder dragons. Given how generic they were in the base games, Toys for Bob gave them all new identities, many themed to the specific regions of the world they occupy. They still say the same things, but are effectively new characters. Do they fit with the original look? I think so, but they showcase more detail than any other characters in the game.

Spyro’s personality is slightly changed form the originals. He has more of a bounce in his animations, and his voice is now consistent. I know that’s an odd thing to say, but he was originally voiced by Carlos Alazraqui, and was replaced by Tom Kenny for the sequels. Toys for Bob brought in Kenny to re-record all of the lines for the first game – a nice touch that unifies the trilogy.

Given just how different the worlds look in remastered form, I found this trilogy to be more interesting and enjoyable to return to than Crash’s. These games don’t preserve history as well, but that’s okay. Having already lived through them, it’s fascinating to see how the worlds have been reimagined and differ from the vision I had in my head. If you’ve never played these games before, I can’t recommend them enough. From a historical standpoint, you can clearly see the foundation for Insomnaic’s Ratchet & Clank series in each level. As a game, Spyro is a blast to control, and collecting gems is an oddly satisfying thing to do. You’ll watch the credits roll on each game before you know what hit you.

On
On
Off
Off
8.5
About Game Informer's review system
Concept
A remaster that keeps the classic gameplay intact, but modernizes the look and sound
Graphics
Overhauled to deliver the detail we expect from games today. The worlds are teeming with life, and each dragon now has a unique personality
Sound
Players can listen to Stewart Copeland’s excellent original score, or switch to a remastered version that dynamically changes based on the player’s actions, such as intensifying for combat
Playability
Spyro’s unique moveset is still a blast to use. The small sizes of the levels makes for breezy and rewarding progress
Entertainment
All three games withstand the test of time and remain fun to play
Replay
Moderately High