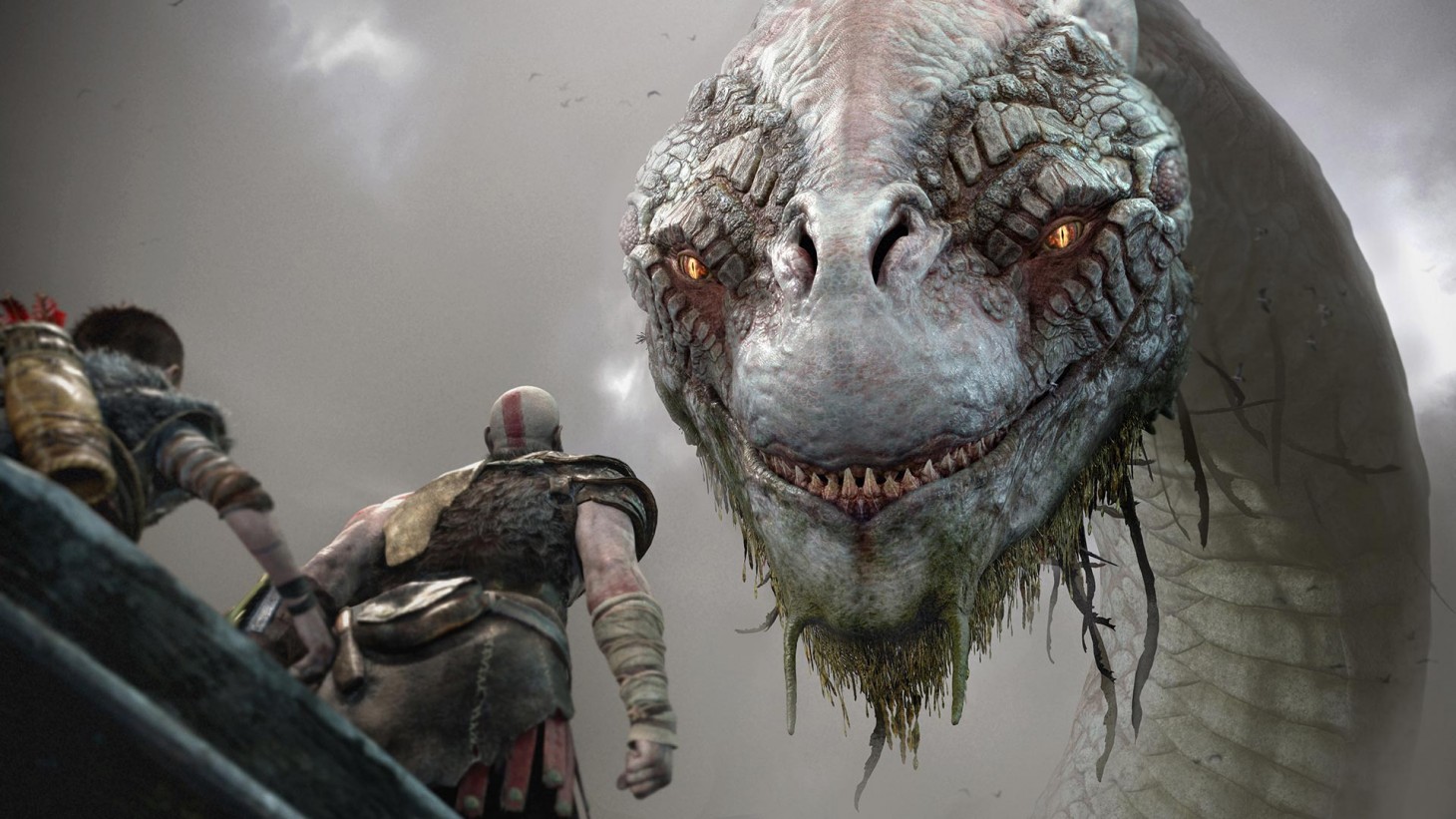 In gruff moments of fatherly instruction, Kratos repeats the phrase “be better” to his son, Atreus. This happens in different contexts, but the lesson remains consistent: Your decisions are not bound by precedent, and the choices of others are not examples to follow – they only set standards you can strive to exceed. In developing the latest God of War, Sony’s Santa Monica studio apparently took this message to heart. While previous games in this series established a successful formula of stylish action and epic setpieces, the team used this opportunity to be better; with surprising changes on every front, God of War forges a new identity and surpasses even its most acclaimed predecessors.

As a longtime fan of the series, this entry captivated me for completely different reasons. The narrative is one of them, despite its simple premise: Kratos and Atreus need to reach the top of the highest mountain in the Norse domain. They encounter detours and surprises along the way, but the precise story beats are less important than how they are conveyed. God of War brilliantly presents a desolate journey in a gorgeous world, all through the lens of the relationship between a distant father and his eager son.

The interactions of Kratos and Atreus range from adversarial to compassionate, and these exchanges have ample room to breathe and draw players in. Atreus wonders what he might say to his departed mother if given the chance – an exercise Kratos finds pointless. When Kratos artlessly paraphrases the fable of the tortoise and the hare, Atreus mocks his lack of storytelling prowess. These quiet moments are interesting, slowly and believably closing the distance between two characters – a focus that contrasts sharply with previous games. In terse responses and long silences, Kratos conveys more than he ever did cursing Olympus at the top of his lungs.

That isn’t to say God of War has sacrificed its ability to deliver incredible spectacle. An early encounter (against a mysterious enemy called the Stranger) sets the bar absurdly high, and a cathartic sequence later on stands out as my favorite moment in the series to date. Between those points and beyond, the adventure is punctuated by a steady flow of enormous beasts, ancient architecture, and intense boss fights. The environments and characters look fantastic, and a new cinematic camera angle brings you close the action and never cuts away – a decision that proves immensely rewarding during big moments by giving you an intimate view. Despite this more grounded approach to presentation, the action’s scope and ambition is stunning in cutscenes and combat alike.

The Greek world may be gone, but Kratos is still a god of war, and his skill on the battlefield is appropriately divine. He fires off magic attacks and performs brutal executions in his attempts to defeat a clever assortment of foes from Norse myth. The ice-infused axe Leviathan is a drastic departure from the iconic Blades of Chaos Kratos once wielded, but it is a well-balanced and entertaining tool of destruction. I like how it emphasizes a more calculated style of combat; instead of zoomed-out, combo-driven encounters, Leviathan makes you a tactician. You can’t cut through huge swaths of enemies with it, so you need to consider how to manage your foes. You can freeze one from afar by throwing your axe, then use your fists to stun and grab another, then recall Leviathan for an area-of-effect ice burst. This kind of strategy gives many fights – especially one-on-one bosses – an engaging duel-like quality. Plus, the “thunk” of Leviathan magically flying back into Kratos’ hand is satisfying every time.

During the first few hours, I had doubts about the axe-and-shield emphasis. In those opening segments, crowded melees are difficult to navigate due to off-screen attacks, which encouraged me to keep my distance – at least until I got more comfortable with key mechanics like parrying. After that, I quickly came around; the combat system’s gradual unfolding in God of War is a joy. Though it may feel restrictive at first, before long you are rapidly alternating between all the tools and skills at your disposal, including your fists, Spartan Rage, Leviathan, and more. Cooldown-regulated runic attacks provide a diverse and unique array of special moves, like a freezing beam or a stunning blast, and I had fun experimenting with them and seeing which ones I wanted to cycle into my regular rotation.

You spend experience to unlock cool new techniques, and they aren’t just damage or range improvements; several have a significant impact on your options, like Kratos assuming a secondary stance from which additional attacks are possible. I also leaned on Atreus for assistance, since his arrows are crucial for incapacitating many creatures. Some of these concepts are introduced too slowly, but on the other hand, I relished how God of War’s battles avoid stagnation through constant evolution. Underlying all of your combat endeavors is a surprisingly involved gear system that gives you an avenue to customize your arsenal, but also dangles aspirational goals in front of you. Many of your deeds provide materials and equipment as rewards, and like an RPG, you see the numbers next to your stats increase as you build and equip new items. You also see materials you don’t have for pieces of gear you want to craft, which adds to the excitement when that item finally drops after finishing a sidequest or beating a tough foe. This layer of upgrading may be less exciting than learning new moves to chop up monsters, but it still provides a powerful incentive to explore.

While not strictly open-world, the game has a large lake with various shores and islands available for free exploration. I loved systematically checking out new locations and acquiring crafting materials, enchantments, and other rewards. These excursions are largely optional, but they are the best way to ensure that you have everything you need for equipment upkeep. As a bonus, these diversions flesh out the world with some interesting NPCs, in addition to offering some fun (but not too challenging) puzzle-like scenarios. They can provide a nice break from the main story, but they’re always available, so you don’t need to invest in them at the expense of the narrative pacing.

God of War’s momentum rarely falters, and when it does, the inconvenience is brief. For example, you have the freedom to explore, but the map isn’t especially helpful for tracking your position relative to the things you are interested in, and the fast-travel system is weirdly cumbersome and opens up too late. This is more frustrating if you plan on being thorough with collectibles and post-game objectives (no new game+ this time around), but that didn’t dampen my enthusiasm for climbing cliffs and delving into ruins long after the 30 hours I spent finishing the main story.

Years ago, Kratos killed the deities of Mount Olympus in a gory rampage. Now, in the Norse realm, he has remade himself into a different kind of god. He is quieter and more deliberate, affected by his history but not constrained by it. Kratos’ reinvention serves as a narrative hook, but it also parallels the series’ evolution as a whole; where God of War once relied on bombast and bloodlust, now it leaves space for strategy and nuance. It still has superb action and plenty of jaw-dropping moments, but it supports them with a new level of depth and maturity. God of War learns from its past while clearing an exciting path for the future, and emerges as one of the best games of this generation. 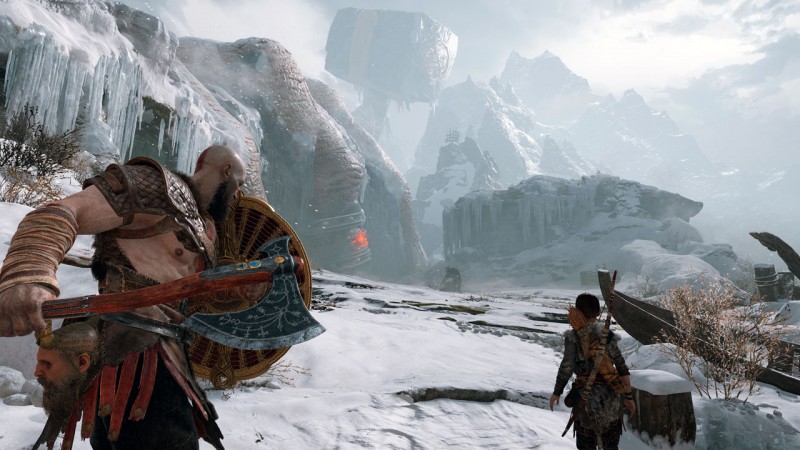 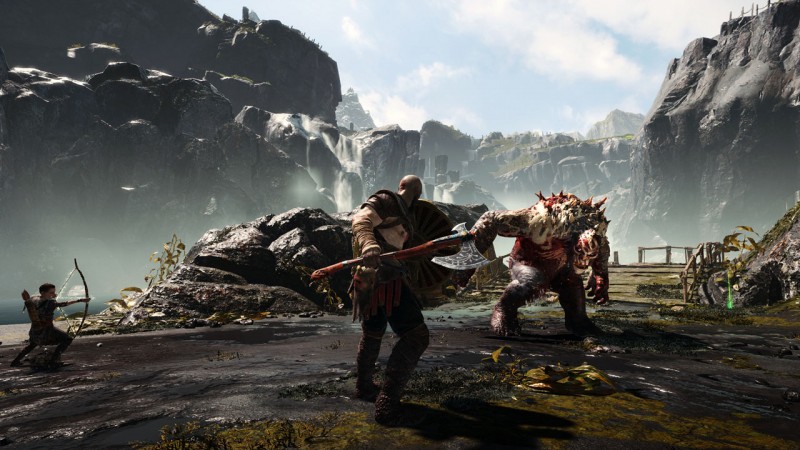 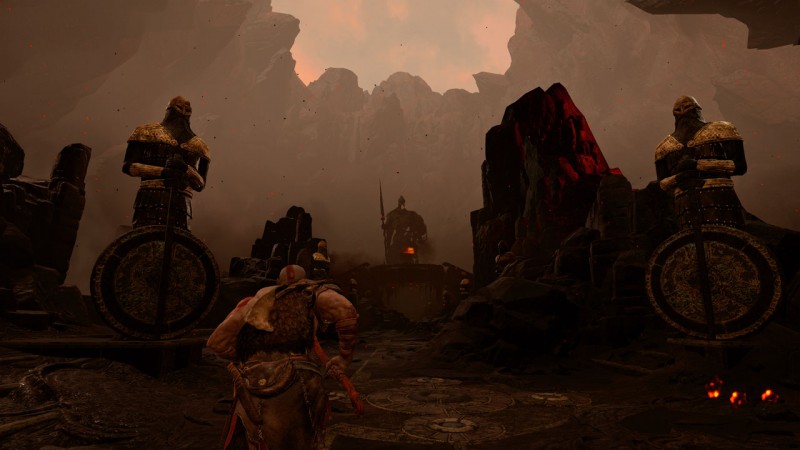 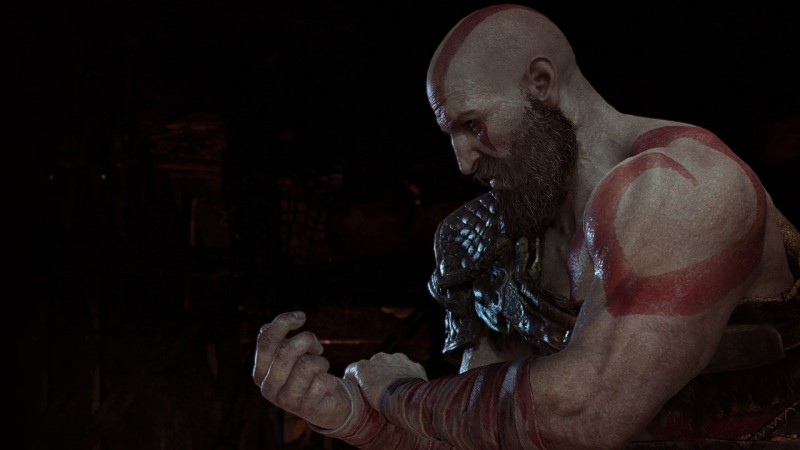 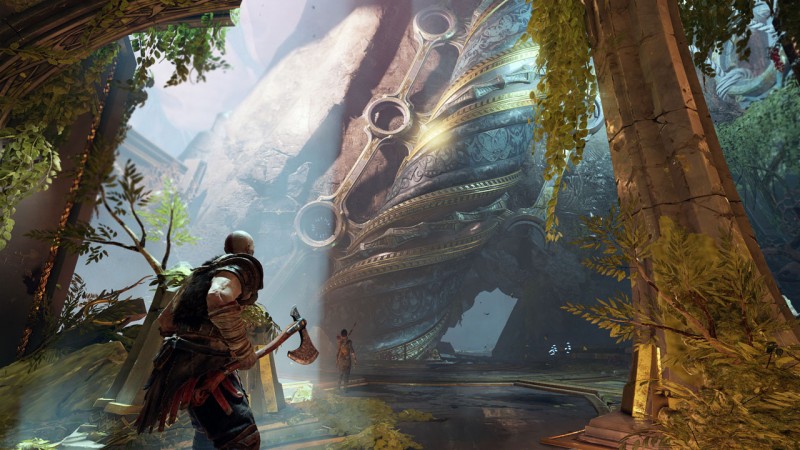 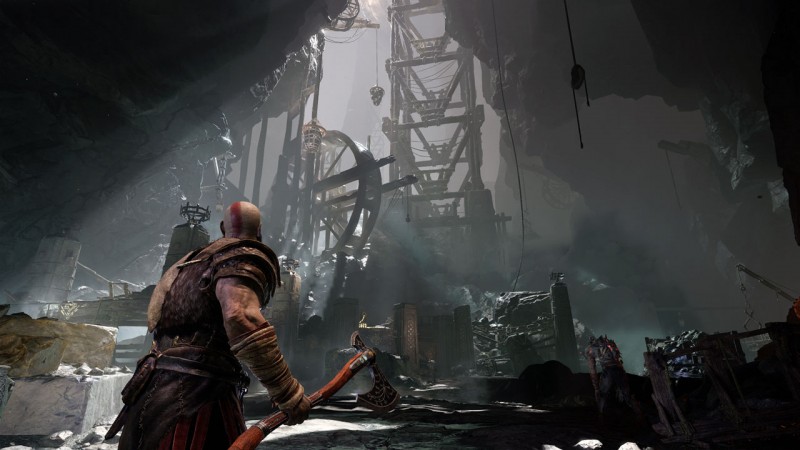 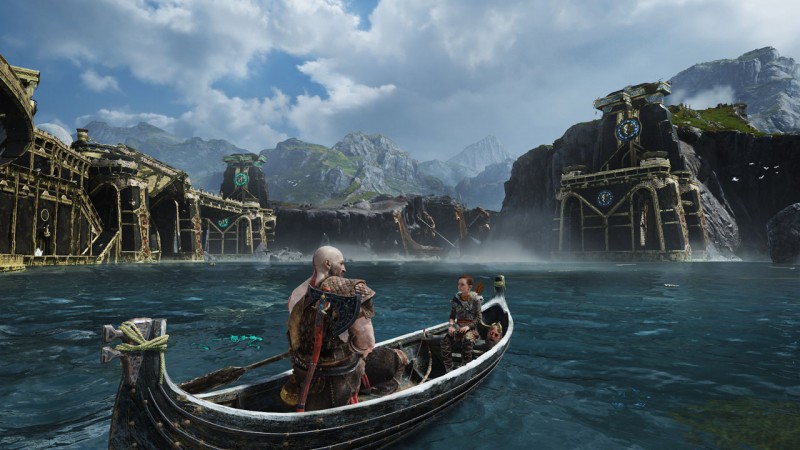 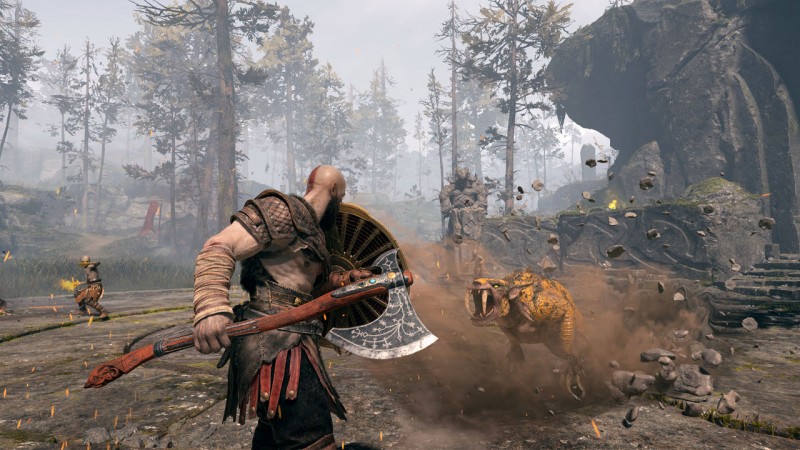 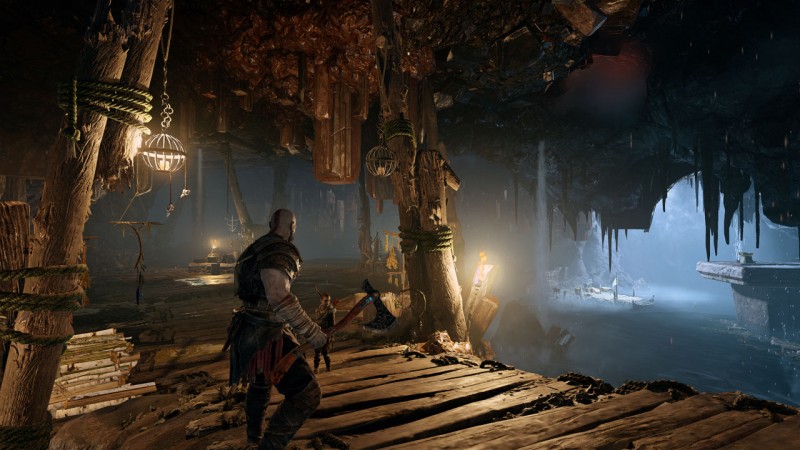 God of War forges a new identity and surpasses even its most acclaimed predecessors.

Purchase More Info
9.75
i
Game Informer's Review System
Concept A sublime reinvention of the God of War series that adds new layers of depth in gameplay and storytelling without sacrificing epic moments
Graphics The world and characters come alive with fantastic design and gorgeous visuals. A more intimate camera ups the intensity of moments big and small
Sound From the quiet tracks to the thunderous climaxes, Bear McCreary’s score supports the action and establishes an interesting tone
Playability Despite a variety of different attacks, the controls make it easy to strategize in combat and use your full array of abilities
Entertainment An enthralling experience from beginning to end, with a mixture of great narrative moments and engaging encounters. God of War is a well-paced adventure that knows when to let the action simmer and when to make it boil over
Replay Moderately High