Into The Breach Review Simplicity and elegance go hand in hand in many mediums, and Into the Breach demonstrates that the same can apply for game design. After the remarkable success of FTL, Subset Games has crafted a follow-up that maintains the same structural progression and addictive replayability, but tacks away toward a fascinating hybrid of turn-based tactics and puzzle gameplay. The result is a cleaner and tighter game than FTL, and one that is more fun, strategically complex, and consistently rewarding.

Kaiju-like giant monsters have devastated the world, but the distant and ruined future has given rise to technology that might have made the difference: vast mechs with the power to end the threat before it shatters humanity. In one threatened timeline after another, you travel back in time and save what you can. Into the Breach’s slick sci-fi hook feeds the endless loop of rogue-lite playthroughs that players confront. Each play session is filled with new weapons to acquire, like boulder flingers and lightning-tinged smoke. You receive new battle objectives to surmount, from saving a passing train to terraforming the land. Whether charging into a battle with a squad of flaming behemoths that singe the towering creatures to a crisp, or using positional powers that maneuver each beast into its ally’s line of fire, the flexibility of tactical options is continually impressive.

Across a series of distinctly tiled islands, players tackle one grid-based tactical battle after the next, each with semi-random events and procedurally generated layouts. The small 8x8 grid, countdown-to-victory turns on a given stage, low hit points, and limited weapon options on any given unit all combine to keep battles brief and constrained. But that constraint makes every action and unit on the board essential and powerful. Nothing is wasted, and almost every single turn can be a dramatic victory, or the end of your whole playthrough.

In these turn-based encounters, enemies telegraph everything about their forthcoming actions, so each time your mechs can act, you’re faced with a devilish tactical dilemma facilitated by often-diabolical enemies. Frequently, the solution lies in finding that one narrow window by which you can avoid disaster for just one more round, like pushing a scenario-ending boss into the water in the last turn before he destroys an essential objective. While playing your turns at a lightning pace is possible, I had more fun examining each turn like an intricate puzzle. Sometimes, only after minutes of staring did I suddenly have that “aha” moment that would completely thwart the enemy and set up a perfect counterattack.

At first, unit action options seem uncomplicated. Pull an enemy one space. Strike a distant target over obstacles, but only in a straight line. Punch something to move it back one square. But those easy-to-grasp fundamentals only get you so far; you never seem to have enough firepower to hold the line. Instead, the fascinating interplay between both your allied units and enemy actions save the day. Punch the giant bug into the line of fire with one mech, so your artillery can hit it again, and in so doing pull another baddie into a space where it inadvertently blasts another foe into corrosive acid. Nailing these intricate combos feels amazing. And because even a keen eye sometimes misses a crucial element, you’re given the chance to rewind time and restart your turn once every battle, helping encourage experimentation.

Whether your playthrough ends in success or failure, each attempt leads to new achievements, mechs, and unique time travelers, which in turn opens the door to additional achievements the next time around that are attainable only with your newly acquired units. New options unlock at a steady and satisfying pace, demanding attention to objectives, but without long periods of stalling out. More importantly, new mechs dramatically change the way you play, helping every playthrough feel fresh and surprising. One squad might be built around damage-over-time, while another team is all about repositioning foes so they hurt each other.

As you make your way through one timeline to another, the other great triumph of Into the Breach becomes apparent – accessible, challenging play for virtually any skill level. Each difficulty setting is thoughtfully balanced and fun. Plus, you can make progress in your unlocks at whatever challenge level you choose. Once unlocked, you can confront any island in any order on subsequent playthroughs. After two completed islands, you can jump ahead to the final battle, or extend your timeline (and score) by confronting the remaining two islands; I love how this feature lets me curate my own session duration. That final island (in contrast to the inexplicable difficulty spike of FTL’s final boss) offers a tough-but-reasonable confrontation that scales to how many islands you’ve completed.

Into the Breach demands concentration and lateral thinking, and some players may balk at the painful sacrifices that become necessary at higher difficulties, and how they arise from random factors of unit placement. Others may struggle at the necessity of such deliberate planning on each turn. But those are less faults of the game, and more variations in player taste. Subset Games has put together a carefully curated playground of tactical puzzles which hide behind a façade of simplicity. 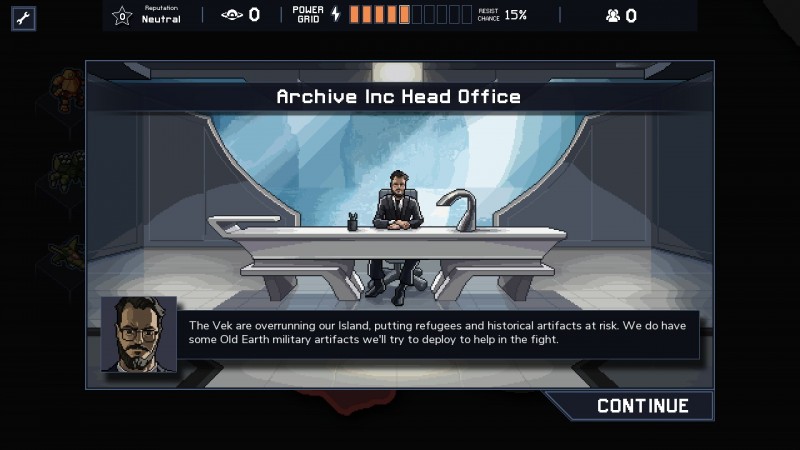 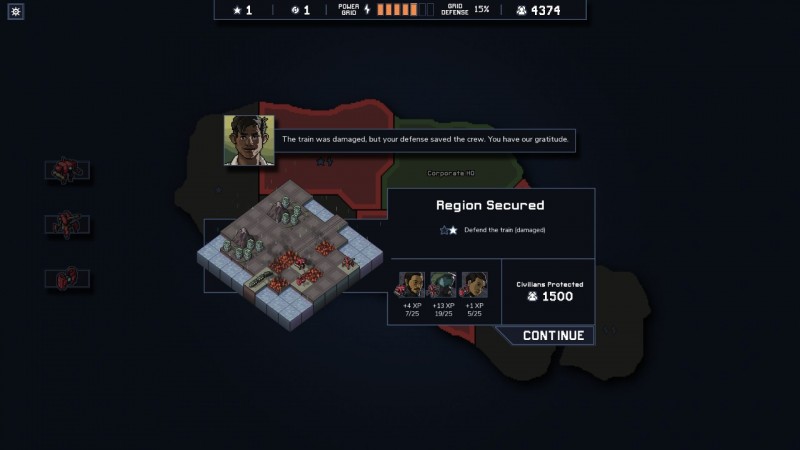 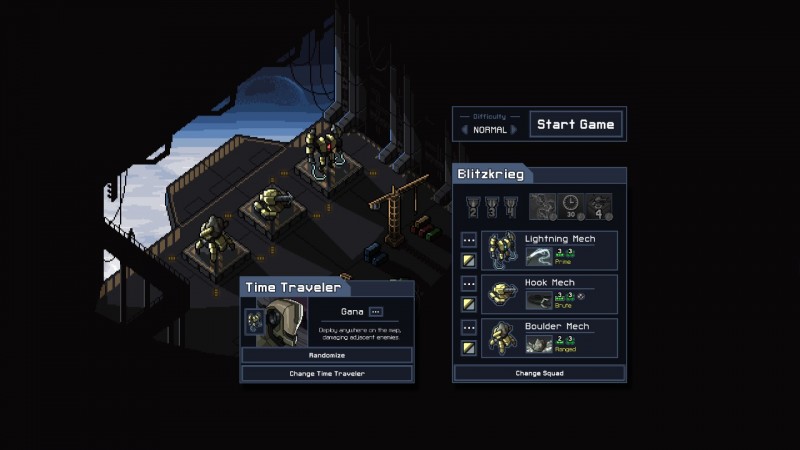 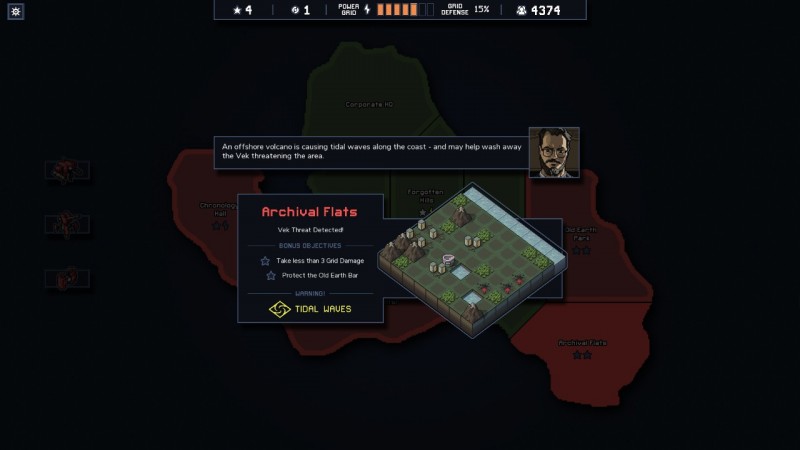 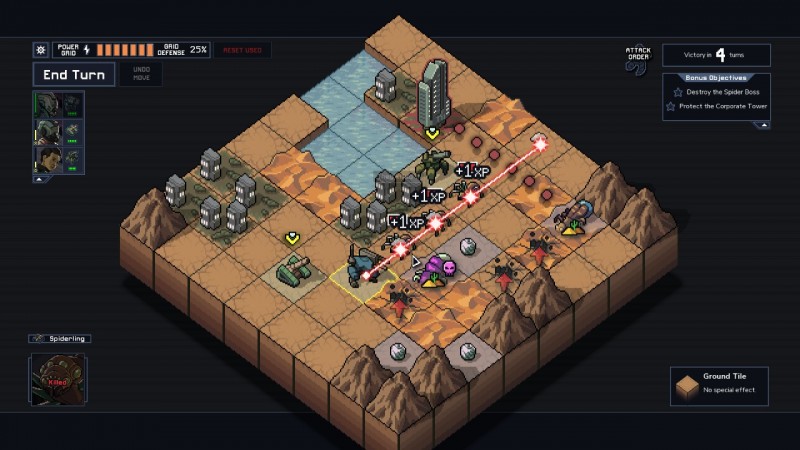 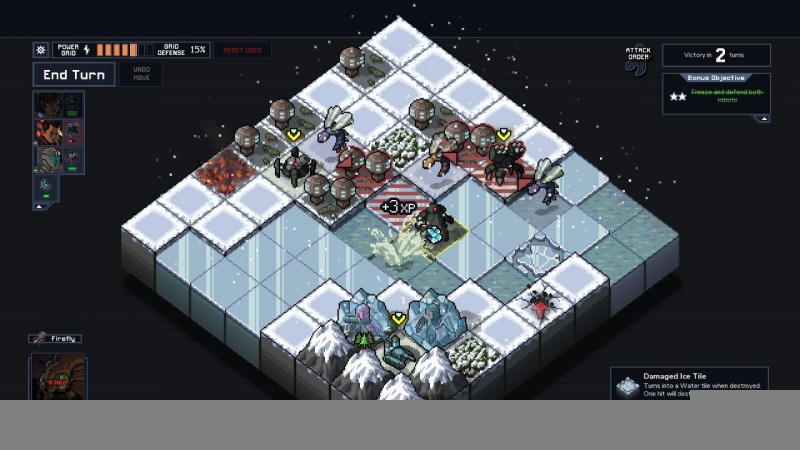 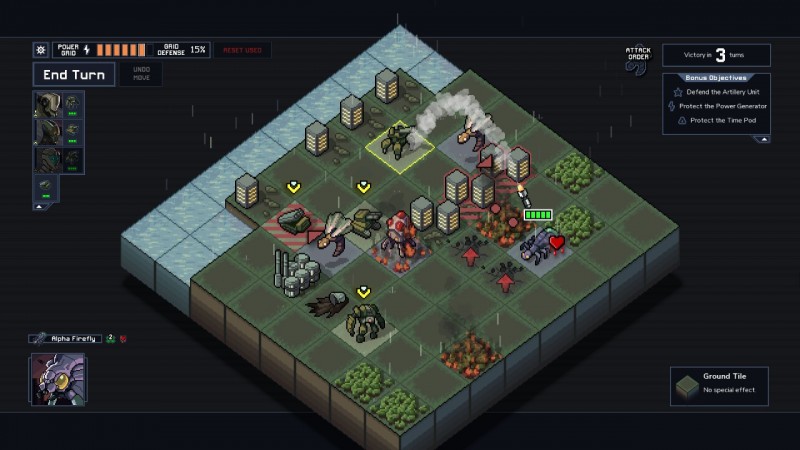