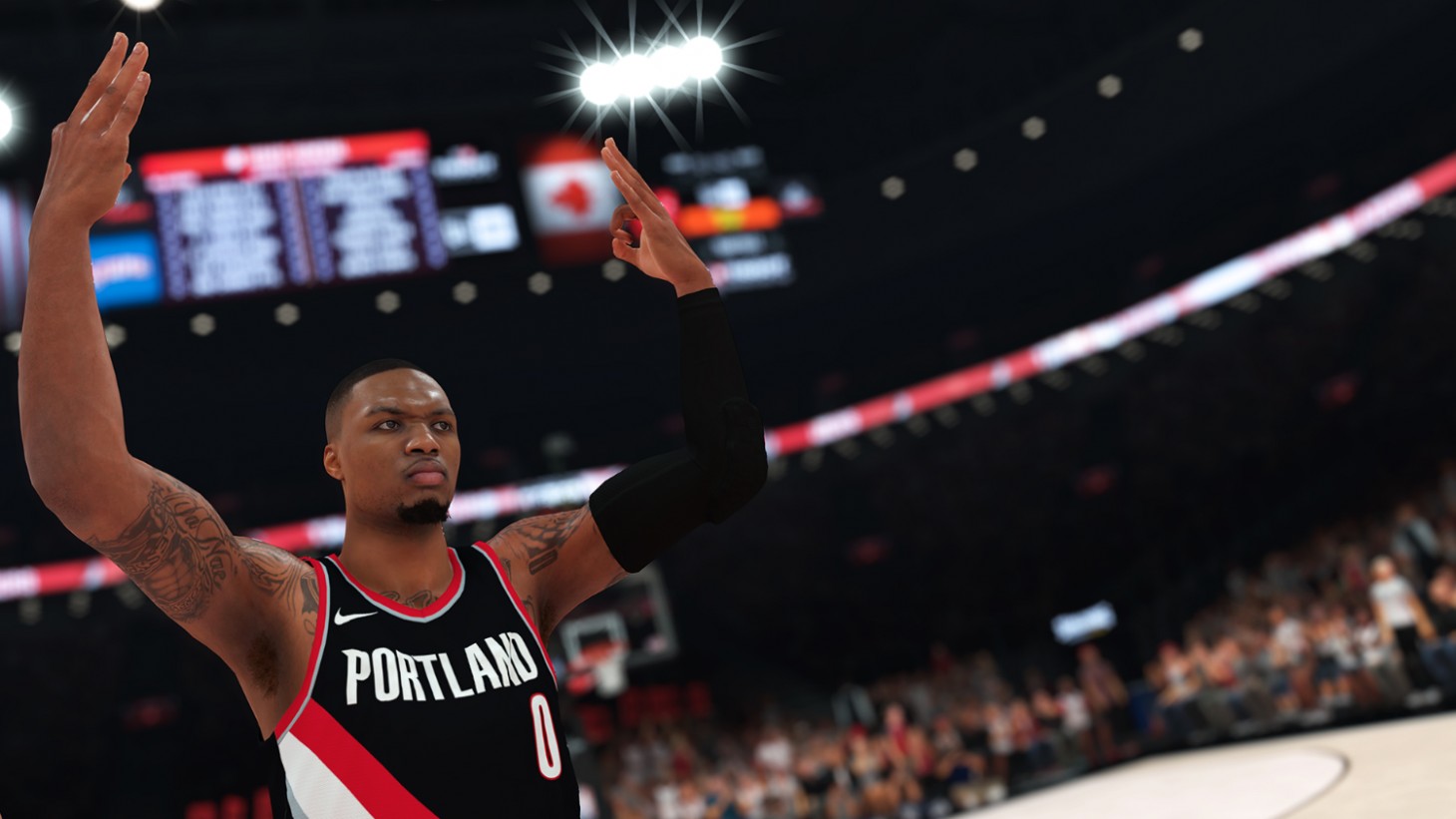 Over the last couple of decades, the NBA 2K series steadily emerged out of the niche sports game genre and solidified its place in mainstream pop culture. These days, pro players eagerly announce their ratings on social media, hip-hop icons like Jay-Z and Pharrell Williams lend their talents for soundtrack curation, and the game stays high on the sales charts year round. The accolades are well deserved, because each year the development team at Visual Concepts improves all the game modes, tightens the on-court action in all the right ways, and takes risks to move the genre forward. NBA 2K19 continues this positive trajectory.

The centerpiece MyCareer mode once again gives players many unique ways to grow and improve their created player. The story follows a highly motivated baller (inexplicably named A.I. – no relation to Allen Iverson) whose path to the NBA takes him overseas to China and through the NBA minor league. The well-acted cutscenes featuring well-developed characters and interesting situations stand in stark contrast to last year’s wayward effort, but the length of these sequences would make Metal Gear creator Hideo Kojima blush and they offer little choice in its trajectory. You still begin as a dramatically underskilled player, which makes the early stages of your career a plodding affair where every other player on the court is more talented than you. I say it every year, but I wish 2K gave you quality-of-life upgrades like a decent amount of stamina, speed, and agility to kick off your career. The grind for becoming a better player still exists in the form of level cap breakers and upgradeable badges, so making your player so feeble to begin with seems unnecessary.

Once you make it to the NBA (which takes a few hours), MyCareer opens up the revamped Neighborhood, which has a dramatically improved layout that places the playground courts in the middle and the shops around the periphery. Earning VC won’t be as hard as in years past thanks to easily achievable daily bonuses, a free daily spin of a rewards wheel, flexible endorsement contracts that give you more say over how you earn extra VC, and live events like dodgeball and trivia that generously reward the victors. If NBA 2K18 rubbed you the wrong way with its aggressive approach to encouraging spending, this year’s edition doesn’t ease off in that regard. You can spend currency on upgrading your character to the level cap, buying new clothes, or acquiring performance-enhancing boosts from a kiosk right out in the open (is the NBA cool with that?). I personally don’t care if people spend their money on visual customization, but creating an uneven playing field can compromise the competitive experience.

Those who like to let their MyPlayer’s skills shine in online competition have even more options at their disposal this year. The park and Pro-Am return (the latter of which finally offers private matches), but NBA 2K19 also adds a 3v3 mode resurrecting the Crews branding and an arcadey trampoline basketball experience. Crews fills a nice gap in the 2K suite by letting you create a squad, customize jerseys, and compete with two other friends against other players and A.I. challengers. The trampoline basketball in The Cages, on the other hand, feels like a throwaway gimmick I won’t spend much time playing. The full array of options impresses, but Visual Concepts still has infrastructure problems in competitive multiplayer. Its stubborn insistence in making players queue for park games drives me mad. Time is precious, and the “got next” concept wastes it by forcing players to needlessly stand around. Why can’t I just jump into a game immediately via a menu like I can with the NBA or Pro-Am games? The matchmaking also could use some work to better pair players of similar ratings. Squaring off as a brown-shirt 60 overall against someone with vastly superior skills isn’t a good way to encourage more players to compete online in these strong modes.

Franchise fans have a lot to look forward to in NBA 2K19. MyGM picks up where last year’s game left off and puts you in control of a new expansion team. You must guide the new franchise through its branding design and expansion draft. The story brings back familiar faces from last year in interesting ways, including everyone’s favorite heel Andrew Sanderson, but I wish the story featured more realistic behind-the-scenes drama. Your front office must contend with sniffing out a mole leaking sensitive player profiles, which is the highlight of the experience, but otherwise a lot of your time is wasted playing trivial pickup games with the hillbilly owner or trading meaningless barbs with your rival instead of dealing with locker room tension, trade rumors, and the myriad other compelling circumstances that can arise in real NBA front offices. The fodder is there for the MyGM story to be remarkable, Visual Concepts just needs to tap into that rich reservoir more earnestly. It’s also curiously easy to build a contender right out the gate; in one simple conversation I somehow lured LeBron James to the team and the rest took care of itself.

If you don’t need a story in your franchise experience, you can skip it altogether and start a traditional MyGM experience. The best new feature in the mode this year is the mentorship system, which allows you to put a young player under the wing of a veteran to speed up how quickly they earn badges of your choosing. This is a smart system that changed the way I viewed my reserves. Instead of stashing low-rated talent that would never earn minutes on the floor, I instead sought out aging veterans who had valuable badges I wanted my young up-and-comers to earn. The rest of the mode plays out the same as previous years, but if you have problems with the trade or free agency logic you can now tweak them to your hearts’ content. The other franchise mode, MyLeague, improves dramatically thanks to live draft and free agency events that let rivals in online leagues try to outduel each other for talent.

Card-collection mode fans have a lot to look forward to with MyTeam this year. The revamped interface makes it easier to navigate the menus, and the addition of the 3v3 Triple Threat and salary cap free Unlimited modes provide plenty of depth. However, MyTeam still has some legacy issues I wish Visual Concepts would resolve. Locking players out of the auction house until they play through several challenges is annoying, especially when you’re already sitting on duplicate cards that you plan to offload. The mode still stubbornly clings to disposables like contracts and shoe boosts as well when competing modes in other sports games have moved beyond them.

On the court, NBA 2K19 shines thanks to a fresh coat of polish that evens out last year’s most glaring issues. Players have the choice of multiple shot meters, and the egregious clipping animations that occasionally killed immersion are gone. The defense is dramatically improved as well, making it easier to stay on your mark. Attackers must do a better job of protecting the ball or risk being stripped, and passes through high traffic areas are way more likely to be picked off or at least tipped. My only major gripes thus far is the sluggish speed of the transition game and the fact that you weirdly get caught on the backs of opposing players when cutting through traffic. Some legacy issues like the lack of boundary awareness still pop up from time to time but make no mistake, this the best playing basketball game on the market.

NBA 2K19 isn’t just a game; it’s a lifestyle. Whether you are a hardcore franchise mode fan, card collection aficionado, or invested in making a mark with your MyPlayer, Visual Concepts latest ode to basketball offers a wealth of satisfying content that should keep you occupied well past the point the Golden State Warriors raise yet another championship trophy. 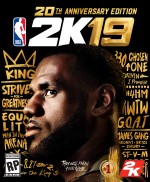 Purchase More Info
9
i
Game Informer's Review System
Concept Continue to elevate the already strong NBA 2K series across all its modes
Graphics The accurate player models and realistic movement make this the best-looking sports game
Sound The rotating commentary teams is a nice touch to keep the broadcasts fresh, and the Travis Scott-curated soundtrack is fantastic
Playability Defense is dramatically improved this year, making you rely on basketball smarts as well as twitch skills
Entertainment The most well-rounded sports game on the market once again
Replay High