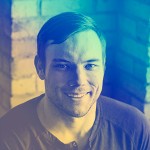 Derek has been playing games as far back as he can remember, but everybody says that. What they don’t say is that the discovery of the original Halo 17 years ago led him on a path where he lived with a chain-smoking man from Alabama in a Super 8 hotel for part of a summer. Derek was always doodling and etching; whether in cartooning class his senior year or painting company banners in military college. He left military college to pursue an art degree, where he ended up going to The Ohio State University to study glass blowing, stained-glass construction, and glass painting. It was during his time in school that he began to pursue writing and started reviewing music and games in his free time. These two forms of media have always been his biggest influences as an artist. Derek graduated and moved on to stained-glass installation, which is where he spent part of that lovely summer in the motel masquerading as hotel. It was here that he realized he needed to focus on his passion for writing and games. He promptly applied to Game Informer to be an intern and was just as promptly denied. Luckily, Derek is not easily beaten, so he worked harder and wrote for sites such as OnlySP to gain an insight in the industry. In the next term, he was accepted. It is the highlight of his life.

The influential indie title gets another release.
by Derek Swinhart on Aug 22, 2018 at 06:45 PM
News

What We Want From The Future Of Diablo

Blizzard has multiple Diablo projects and we have some input.
by Derek Swinhart on Aug 13, 2018 at 05:30 PM
News

Tickle Your Spidey Senses With The Spider-Man Launch Trailer

10 Under The Radar Games On The Horizon

Explore The Dreaming City With The New Destiny 2: Forsaken Trailer

Future films will move onto Disney's own streaming service, including Captain Marvel.
by Derek Swinhart on Aug 07, 2018 at 04:00 PM
Feature

Under Construction: The Process, Pressure, And Mindset Behind Developing With Early Access

Four Developers Detail Their Experience With Early Access On Steam.
by Derek Swinhart on Aug 06, 2018 at 05:00 PM
News

Unleash Your Fury In For Honor Season VII

The multiplayer dueler enters it's seventh season of content.
by Derek Swinhart on Aug 02, 2018 at 04:25 PM
News

Failure will lead to a number of possibilities in this XCOM inspired title.
by Derek Swinhart on Aug 02, 2018 at 12:15 PM
News

Lose Your Taste For Hygiene With The New Sinking City Trailer

Return To London With These New Vampyr Difficulties

Dontnod's recent release is getting some new ways to enjoy the story.
by Derek Swinhart on Jul 27, 2018 at 11:30 AM
News

Forza 7 Getting Rid Of Prize Crates And Paid Tokens

Arcade1Up Looks To Bring Arcade Cabinets Into Your Home