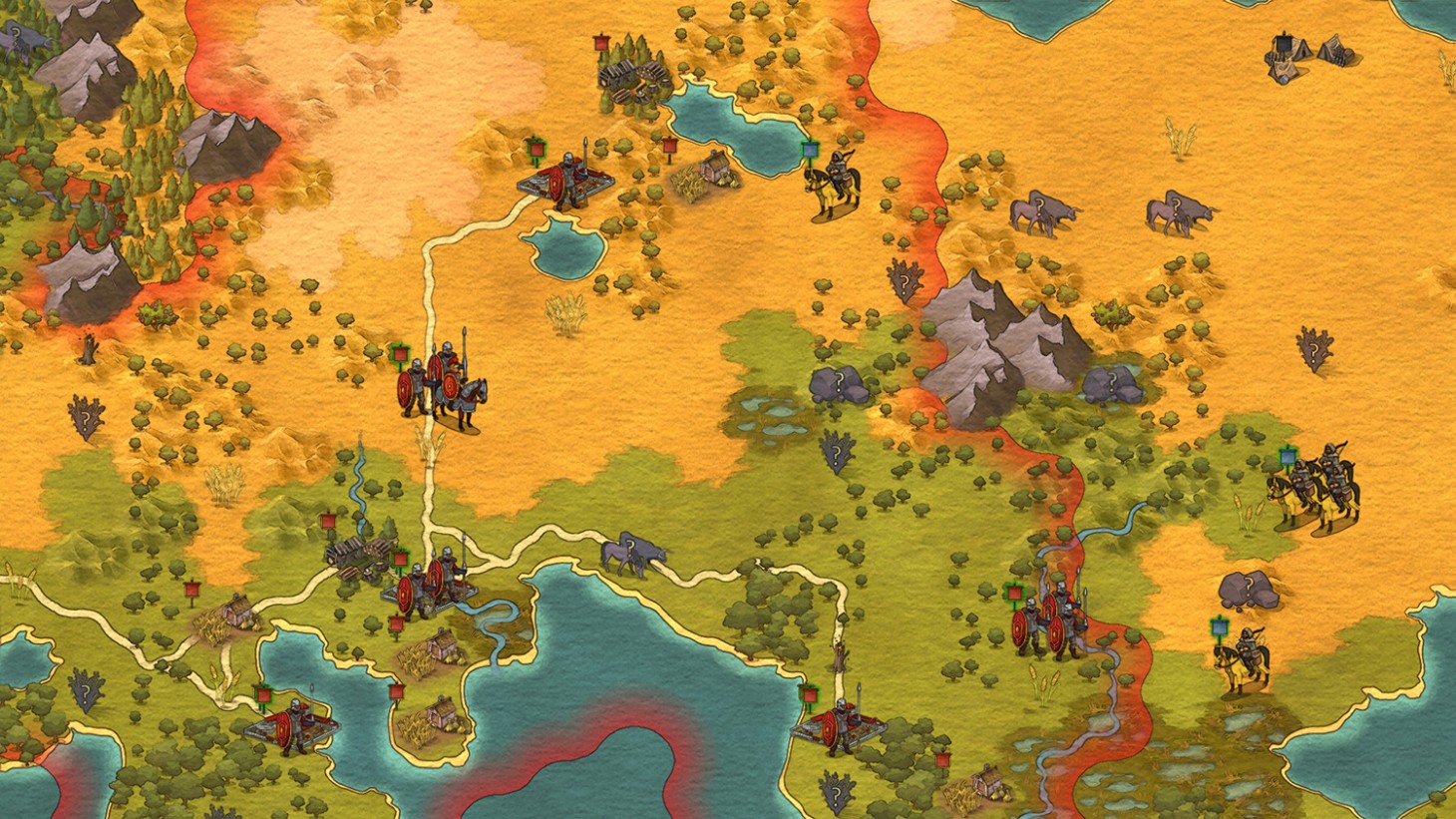 At The Gates Review

Brutal is an adjective often applied to video games, usually when someone is describing a bloody headshot or tricky combo they’ve pulled off in a fighting game. At The Gates houses a different kind of ferociousness, one that’s slower and more concerned with challenging your intellectual prowess than your sensitivity to bloodshed. The game casts you as a barbarian lord trying to lead your clan to survival in a land where the only thing deadlier than the other barbarians are winters that rip the flesh from men’s bones. Survive those first few years and you might find yourself on the path to becoming a conqueror of Rome – if you’re lucky.

Though At The Gates bears a similar look to Civilization and other 4X strategy games, it has just as much in common with rogue-likes. The units you lord over are not presented as armies or squadrons but instead “clans.” Each clan has a designated portrait and various conditions that affect its stats, giving each a unique strength and weakness. For example, clan Relindis might train faster than anyone else due to being quick-learners, but their impulsive nature makes them likely to steal from your resources from time to time. You need to give each clan a job that they fulfill for your burgeoning empire. You might make one a gatherer to pick berries, another an explorer to chart the map, someone to hunt, some to fight with spears, and so on.

This RPG-lite system is effective because your units become more than little statistics you march across the map, but instead characters whose needs you have to manage. The personality and desires of your people become just as much of a concern as storing food, especially as winter sets in. Every two turns takes up a month out of the year. During the spring, summer, and fall, you need to not only construct important buildings and train your clan, but also stockpile supplies because it’s essentially impossible to forage for anything during the 10 turns dedicated to winter. Worse, if your units are out in the snow with little supplies for them to scavenge, their health will tick down. Earning back health for your clansmen is a chore.

Luckily, loss of units in At The Gates isn’t often fatal. Dead clans are automatically replaced with another to fill in the space, but you lose all of their training and proficiency, meaning that you have to invest the most important resource in them: time. The most compelling feature is also At The Gates’ most frustrating one: every single action of importance takes a huge amount of time. Do you need to train surveyors so you can find some flax in order to craft cloth for the purposes of expanding your clan? That takes four turns. However, you also need to have enough tools on hand to train the surveyor, which means you need to train a blacksmith, so it’s actually going to take eight turns for you to get that cloth. During that time you’ll have to deal with the las two months of winter, not to mention whatever bandits or opposing armies have it out for you in that timespan. While this sounds like a recipe for boredom, more often than not, tension is on the fringe of your map. Watching the valleys and mountains surrounding my growing settlement become covered in more and more snow with each passing turn filled me with a surprising amount of anxiety as I shooed my non-essential clans inside the gates of the settlement to help protect them from the deadly cold. Progress is slow in At The Gates, but every single new bit of knowledge my empire learned, like the secrets of mining or how to turn animals into cloth, felt like accruing small victories over the unfathomable terror of nature.

Unfortunately, as fun as the metagame design of At The Gates can be, the combat doesn’t rise to the same level. Building up an army of military units is often a waste of time until you get to the endgame due to how long it takes to research basic survival features, and even then squaring off against other armies isn’t that fun since battles are presented as two units attacking each other on the map in simple animations. The Civilization series could bear that rudimentary display because they often have weird comical battles featuring things like tanks duking it out with medieval knights. However, given that At The Gates is confined to The Dark Ages, there is no oddball saving grace. Fortunately, there are diplomacy options and a economic victory condition (with a twist) to take over Rome, so you don’t have to go full military machine if the prospect of warring your way across Europe bores you.

The assortment of specialization paths lets you focus on building economies based on certain resources, like iron or crops. The procedurally generated nature of each game (with different resources, map layouts, and starting clan attributes being randomized) also makes the possibilities of each session quite variable once you get past the opening turns of exploring and scavenging for essentials. In one game, your settlement might spawn in the crook of a mountain surrounded by plentiful plant life, minerals, and meat sources nearby. In another, you might find yourself in a desert patrolled by bandits, forced to pack up your settlement in a constant search for a better home. While procedurally generated game states can often be a source of frustration, in At The Gates they often lead to compelling situations that let you craft enthralling stories about your empire, whether they’re tragedies or triumphs. Forming alliances with other factions unlocks the ability to play as those factions in future sessions, adding variants since every faction has its own unique perk (The Avars can train horse archers and gain +1 movement for all their units, for example). The faction-unlocking is a smart mechanic, giving you something to chase and achieve even when the odds for victory in a session are drifting away from you.

At The Gates is at its best once you’re past the steep learning curve and can see the payoff of your careful planning and shrewd tactics in the distance, whether it’s a bounty of food or a significant technological advancement. The slow pacing, difficulty, and confined historical focus might prove a barrier for some, but I loved carving out my own empire of riches in the roughs on grit and determination alone. 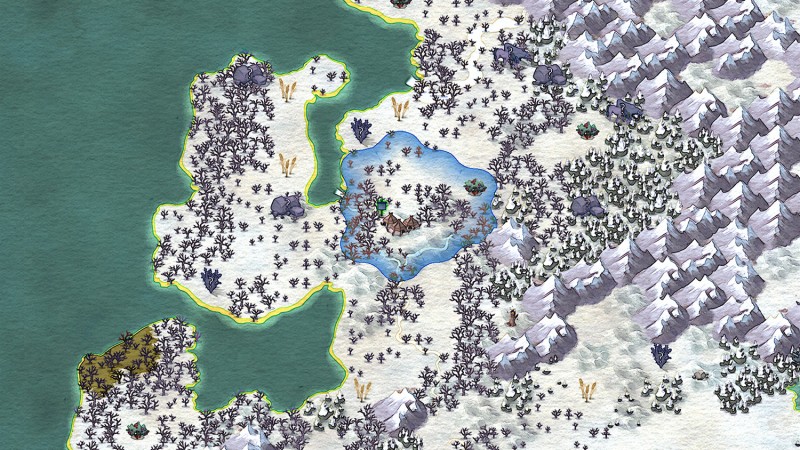 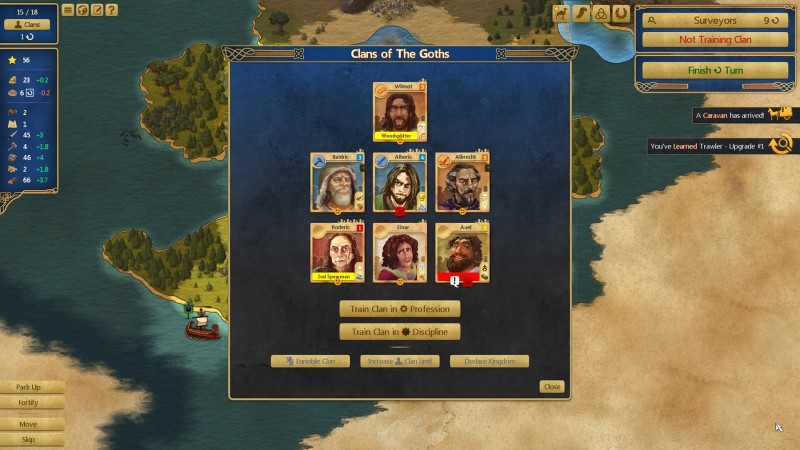 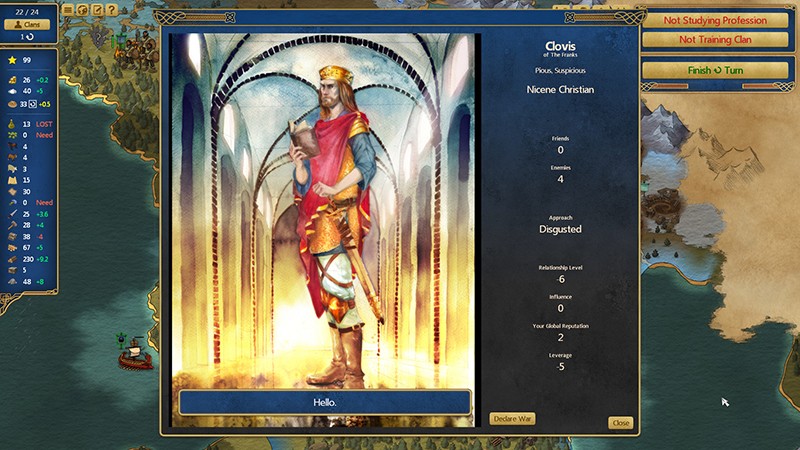 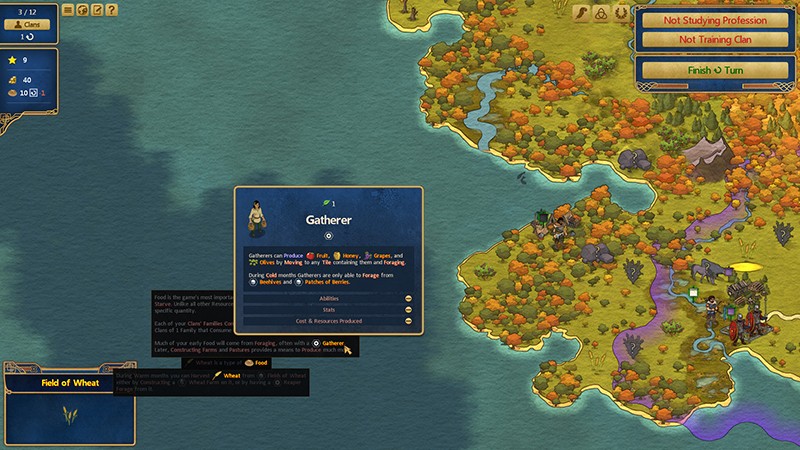 Off
8
About Game Informer's review system
Concept
Survive inhospitable landscapes, vicious barbarians, and starvation on your bid to become the biggest empire of The Dark Age
Graphics
A beautifully drawn map and 2D-animated characters gives At The Gates a unique look
Sound
The sounds of units barking at one another or pickaxes smashing into stones are serviceable, if forgettable
Playability
With tooltips serving as your only real tutorial, you mostly have to stumble your way through the first couple of sessions, which can be a harsh learning experience
Entertainment
At The Gates’ opening hours are vicious, but those who stick with it are rewarded with a satisfying blend of strategy and rogue-like gameplay
Replay
Moderate 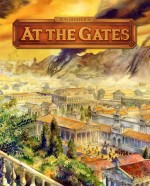