Funny To A Point – Living In The Age Of Spoilerphobia 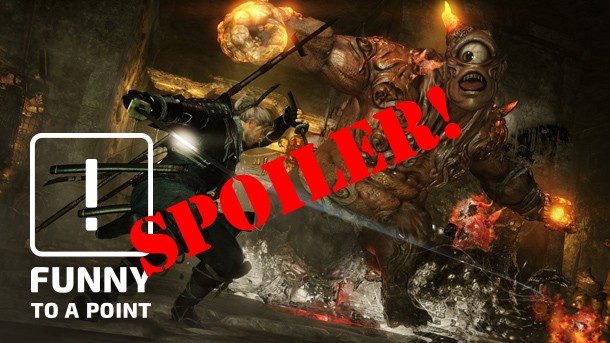 Political strife. Worldwide chaos. Fictional plot twists. If that last one scares you the most, then spoiler: You've got problems. Luckily, you're not alone.

Few things get gamers more worked up than a potential spoiler*, and I don't think you have to be a paranoid nutjob to understand why (you may still be one, but you don't have to be one). Like other entertainment mediums, modern video games go to great lengths to tell intricate and nuanced stories, and most gamers want to experience those narratives firsthand, the way their authors intended. Finding out a key piece of information early can ruin the impact of a big reveal, or leave you guarded against characters and events that you suspect might be affected by it. Instead of being immersed in the story and characters, you become keenly aware of its structure – that unwanted bit of omnipotence transforms you from a player in the thick of the action to a detached observer. It's like knowing who the murderer is in a whodunit, while all the other characters get to gleefully suspect and accuse one another as they unravel the mystery (it's the butler, FYI. It's always the butler). It's like understanding the secret to a magician's trick – the rabbit was up his sleeve the whole time! It's not magic; it's just sleight of hand.

For everyone but the rankest of online trolls, ruining the magic of a good plot twist is unforgivable, but it still inadvertently happens sometimes – even in the G.I. offices. Joe wrote an entire(ly justified) blog post chastising Tim for spoiling the ending of Red Dead Redemption for him. Heck, Hanson still gets crap for outing a plot moment in Spec Ops: The Line during a Top 50 meeting four years ago – despite the fact that no one has even feigned interest in going back and playing it since then. A slip of the tongue like that can happen to anyone, but more often spoilers result from misaligned expectations of what is and isn't considered a spoiler.

And that's the special thing about spoilers: Your own spoiler sensitivity has no bearing on your judgment of the thresholds of others. Everyone has a line for what they think constitutes a spoiler. Mosey right on up to that line and you're just another upstanding gamer who "gets" how spoilers work. Step your toe over it, however, and you're a hopeless deviant in need of a life or a straightjacket.

As a person who suffers from an acute sensitivity to spoilers myself, I still remember the first time I was confronted with someone else's full-blown spoilerphobia while working at G.I. Back in 2010, I wrote a seemingly innocent news story on a new Left 4 Dead 2 DLC expansion that featured the cast from the original L4D – one of whom would die during the mini-campaign. Shortly after posting the news story, I was flooded with angry emails and tweets for "spoiling" the big surprise. I didn't say which character was going to die, mind you, but the mere mention that someone would die was a spoiler to some readers – despite the fact that the DLC pack was called "The Passing," and Valve's entire marketing campaign was predicated on the mystery surrounding the deadly sacrifice. When you suffer from spoilerphobia, however, no information is too obvious.** But you don't need to dig up ancient history for examples of dubious spoiler rage. Instead, look no further than our recent coverage of Nioh (pronounced like so). Commenters freaked out over us posting a video of Nioh's final boss battle, despite the extreme lengths we went to avoid spoilers: We used stock images for both the article and video thumbnail, we included a huge, bold spoiler warning, and we didn't include any specific details in the article's description. That didn't stop anyone from being shocked that we would, oh I don't know, post an Informative Game video for people who want to see it. People do understand that "Watch Us Beat Nioh's Final Boss" isn't a literal command that you're forced to obey, right?

Thankfully, the Nioh hullabaloo was quickly forgotten – in favor of raking Kyle over the coals for his MASSIVE Zelda spoilers! In his write-up of our Breath of the Wild cover story, Kyle made the fatal mistake including the title of one the game's bosses, which I won't repeat here because that's the crazy world we live in now. In hindsight it's always possible to see where they're coming from, but as with many spoiler discussions, it begs one simple question: If you are so sensitive to spoilers that you consider the name of a random boss taboo, why the hell are you reading a story that outlines what kind of information we'll be sharing in our deep dive of the game? I have no qualms about judging people who are more spoiler-crazy than I am, but I also know what it's like being on the receiving end. My wife is what you might call 100-percent spoiler-proof – not only would she not bat an eye at a plot-ruining bit of info, she actively seeks it out. Just the other day, I watched in bewilderment as she plucked a book from a bookshelf and read the last two pages to gauge if she'd like it. Madness! To her, however, I'm even crazier. What else would you call someone who physically covers their eyes during movie previews like a child hiding from the bogeyman? (In my defense, those Force Awakens trailers showed a lot! I assume. I still haven't watched them.)

Even worse, I may or may not*** be guilty of frequently covering her eyes as well. My rational argument for it is that if she knows a spoiler, we can no longer wonder and hypothesize together about what's going to happen. However, there's a very real, very strong irrational impulse as well, which is that I DON'T LIKE SPOILERS AND I DON'T WANT ANYTHING SPOILED FOR HER EITHER WHETHER SHE CARES ABOUT SPOILERS OR NOT BECAUSE I DON'T KNOW WHY. Suffice it to say, this is something we're still working on. But seeing the argument through her eyes (when I'm not covering them), has raised an interesting question: Is being this obsessively paranoid over spoilers really worth it? Sometimes I feel like I spend more time worrying about spoilers than I do actually enjoying the underlying story, and I know that I've missed out on great conversations by not being "caught up." Would we all be happier if we could just greet spoilers with a shrug of the shoulders? There's only one way to find out – by openly discussing and celebrating the biggest video game spoilers that I can think of. Don't stop reading, this is going to be therapeutic! The Last of Us: Naughty Dog's survival-horror hit was an incredible character study of two flawed and believable humans trying to survive the apocalypse together. That's why I was stunned when the ending revealed that Joel was actually a robot the entire time. Who could ever forget Ellie hypothetically asking what would happen if Pinocchio said, "My nose is about to grow," only to watch Joel drone "Does not compute," repeatedly while sparks shot out of his ears. It really makes you think.

The Walking Dead: Speaking of zombie apocalypses – we all know how dangerous the undead can be, but never in a million years would I have guessed that Lee would die from a fart attack at the end. I still tear up when I think of his final words: "Aww, Clem, I shouldn't have eaten those baked beans..."

Mass Effect 3: BioWare's stellar sci-fi RPG got a lot of flak for its color-coded finale, but I still can't believe more people don't talk about the fact that the developer shoehorned in such a glaring product placement for Skittles at the very end. When Shepard jumps into the multi-colored beam and yells "Taste the Rainbow! ®" and then is crushed to death by a mountain of Skittles? My jaw hit the floor...

The Last Guardian: Everyone assumed Trico was going to die in The Last Guardian, but the real ending was even more surprising. I totally wasn't expecting the reveal that every other living being is dead, and that it's up to the boy and Trico to repopulate the planet. I also wasn't expecting the 30-minute gratuitous sex scene the game ended on. No wonder development took so long... Tetris: This might be an old one, but did anyone else find it weird that Tetris ends with all of Nintendo's beloved mascots cheering on their new Russian overlords as they launch their nukes on the U.S.? Talk about crazy!

Watch Dogs: People have praised how Watch Dogs tackles the modern-day concerns of personal privacy and government surveillance, but I'm still puzzled by the late-game revelation that the entire ctOS surveillance network is run by literal watch dogs. Not to mention the fact that you defeat them by simply throwing a bag of milk bones out the door and telling them to scram. What does it all mean?

Minecraft: Along the same lines, I'm still reeling from the Planet of the Apes-style twist at the end of Minecraft, when it's revealed that Steve has been on Earth the whole time, and that Creepers are the lizard people who took over government and blew it up (metaphorically but also LITERALLY) from the inside. That kind of insightful political commentary is so relevant, and just doesn't get the appreciation it deserves.

Metroid: 30 years later, and I still can't believe seeing Samus pop out of her Power Suit in a bikini and realizing that she was a woman. I don't even have a joke for this one; it was simply a mind-blowing moment.

And that, my dear readers, is how you cure spoilerphobia!

Need a few more laughs? Click on the banner below to check out Funny To A Point's fancy-pants hub!

*The few exceptions being: DRM, microtransactions, annualized franchises, season passes, Destiny's launch content, triple-A publishers trying to make money, Prey being called Prey (for some reason), criticisms of Nintendo, criticisms of JRPGs, enjoying Call of Duty, anything even remotely political, and every top 10 list and review score ever. (back to top)
**Well, I can think of one universal exception. SPOILER: Dane Cook suuuuuuuuucks! (back to top)
***I am. (back to top)