Mario, Luigi, Peach, and Toad go for a night stroll on the castle grounds to catch some fireworks. Out of nowhere, a clear pipe busts out of the ground and a small fairy creature pleads for them to rescue her friends. Bowser pops out of the pipe, grabs her, and leaves with the team in hot pursuit. After 25 years as a damsel in distress, Princess Peach finally rejoins the playable cast of a mainline Mario title for the first time since Super Mario Bros. 2. This refreshing change of the formula gets things off to a great start and teases Nintendo’s willingness to tweak tradition throughout the rest of the game.

While 3D World shines in single-player, the fun multiplies with others. This merges clever and flexible 3D maps with New Super Mario Bros.’ wild four-player gameplay. Everyone fights over their favorite characters not just for looks, but also for their unique traits. Will you go for Luigi’s high jump, Toad’s speed, Peach’s mid-air float, or Mario’s balanced skills? As long as a character isn’t already taken, you can easily swap before every level. Players can jump in and out at practically any time – and use almost any controller setup. It’s as versatile a system as you could ask for.

So many great co-op memories abound: zipping around in go-kart sized ice skates, protecting your pals from ghosts with head-mounted lights, clinging to life together on top of a giant angry-faced gemstone, and riding on the back of a friendly dinosaur named Plessie. But working together is only half of the fun. Tossing friends off a cliff, scrambling past them to get power-ups, and doing whatever it takes to get higher on the end-of-stage flagpole always gets everyone hollering. Nintendo never encouraged or discouraged this behavior before, but now players watch their points tally up at the end of each level. The best performer gets to wear an ornate crown. It’s a subtle-yet-effective system that keeps you looking out for number one even when you’re supposed to be working together.

The new power-up on the marquee is a fuzzy cat suit (favorites like the fire suit, tanooki suit, and boomerang suit return). What could have been a creepy getup turns out to be unbelievably adorable thanks to spot-on cat animations. Characters trot around on all fours and even do a little butt wiggle before they pounce on foes. Each character’s unique “meow” celebration after beating a level is endlessly charming. This upgrade also allows Mario and company to scale walls, helping them get out of jams and find hidden paths, and the scratch attacks and dive bombs add valuable offensive options.

A new double cherry item allows you to control several duplicates of your character. While it’s a neat gimmick, it’s not viable as a fulltime power. Once a copy strays away from the group, it’s only a matter of time before it falls into a hole or runs into an enemy.

New green stars replace traditional star coins, providing incentive to search for secret paths. Some minimal roadblocks appear from time to time, but if you’re grabbing all the low-hanging fruit, you won’t be halted in the standard worlds. Bonus stages abound after you see the credits, encouraging you to run back and clean up on stars. It’s satisfying to revisit levels and clear them completely and in turn receive a new cluster of levels to enjoy. You also unlock an awesome, recognizable bonus character with several unique powers.

My only big complaint stems from the item grab button being the same as the run button. This leads to players picking up co-op partners constantly when they don’t intend to. What makes it worse is that there are several unused or redundant buttons on most of the compatible controllers that could have easily taken on this function.

Despite this annoyance, I loved Bowser’s egocentric concept for the final world in the main campaign, and the last boss battle is plenty entertaining. Any Mario game runs the risk of the final encounter being too traditional or featuring a frustrating gimmick, but this one brought a smile to everyone’s faces on my co-op team from beginning to end. While it’s not the most difficult challenge, it is suitably epic and entertaining – an exceptional finisher to an excellent entry in the series.

9.25
About Game Informer's review system
Concept
Introduce New Super Mario-style multiplayer to the 3D Land structure
Graphics
Mario and the new Sprixie Kingdom look great in HD
Sound
The soundtrack is amazing. I can’t help but hum the music for a good hour after each session
Playability
Essentially every Wii U controller option is supported. Be thankful you hung on to all of those Wii remotes
Entertainment
Nintendo does it again, blending novelty with nostalgia to offer some of the best couch co-op out there
Replay
Moderately High 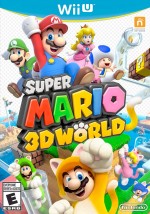