Prior to video games offering players the option to dictate how a story plays out through choices, books delivered that feeling with series like Choose Your Own Adventure. Stories: The Path of Destinies provides a similar experience, giving you narrative control at certain junction points, then allowing you to begin the story again if you make the wrong decisions. With solid top-down combat and exploration tying those decision points together, Stories delivers an interesting take on choice-driven storytelling, but the repetition of playing through the same stages and hearing the same story modified with your choices causes the experience to grow stale.

At the beginning of the story, protagonist Reynardo, an anthropomorphic fox with a heroic self-image, sets off to take on the empire and its army of ravens in the name of the rebellion. Reynardo comes into possession of a magical book that lets him restart his journey while retaining all accumulated knowledge and skills if he fails. Decisions you make over the course of Reynardo’s journey are impactful, doing more than just changing dialogue. One early decision point has you decide between rescuing an old friend or pursuing a super-weapon that might greatly help the rebellion, and based on that decision, you play through one of two different stages next.

Each time you reach a fail-point, you learn about the consequences surrounding each choice. Thankfully, these failures aren’t devastating, as each playthrough lasts only five short stages and yields valuable information you can use on your next attempt.

Stories: The Path of Destinies presents these lessons through four truths that you uncover over the course of multiple playthroughs. Though you learn other things (like certain character tendencies), the four big truths are the only constants that hold true regardless of your other decisions. Rather than making the right choices for you next time, these truths serve as illuminating guides for subsequent playthroughs as you work toward making all the “correct” decisions to achieve the best ending. I always enjoyed playing through the story, exploring different parts of the decision tree in hopes of learning a big piece of information so I could get closer to the good ending next time. Though uncovering these truths add some variety by offering new options at particular decision points, the repetition in both the enemies and the story itself set in after a few playthroughs.

The changing narrative is the main attraction, but top-down action of Stories: The Path of Destinies is also enjoyable, along with rewarding (but minimal) exploration. Reynardo’s combo-based swordplay is fluid as he jumps from enemy to enemy, slashing, countering, and grabbing his way through the waves. I loved striking down an enemy, then using the awesome dash ability to quickly seek out another target to wail on. The combat mechanics do little to set themselves apart from similar counter-based systems, but the solid mechanics made it so I always looked forward to slicing through multiple enemies at a time.

The combat is fun, but it needs more enemy diversity. The adventure pits you against three kinds of grunt ravens (standard, shielded, and explosive) and two kinds of warlock ravens (fire and support). You also encounter floating eyeballs in a few simple stealth sections, but these sequences are more effective at switching up the pacing than challenging your sneakiness. Each enemy type has its own strategies, which can take some getting used to. I died several times trying to learn the rhythm of these types and how they work in conjunction with each other, but once I’d figured them out, the encounters presented little challenge outside of the sheer numbers since there are no boss battles.

The challenge of Stories’ combat is further alleviated in later run-throughs by the great progression systems. As you gain experience in combat, Reynardo levels up. The skill tree lets you rise from inexperienced novice to skilled warrior in relatively short order. My favorite upgrade let me automatically bounce from enemy to enemy regardless of the distance between them after reaching a certain combo level. I eventually maxed out that branch of the tree, so when I carried a combo of 20 hits, every strike was fatal. Wielding that kind of power feels awesome, as it conveys a sense of progress in a world that has remained stagnant.

You can also craft and level-up four different kinds of swords. Each sword has its own special power that you can activate. For example, the Hero Sword refills your health, while the Void Blade increases your movement and attack speed. Each sword also gives you the ability to pass through corresponding walls, adding new layers to the exploration of earlier stages with the crafting of each new blade. As you scavenge for crafting materials, you also find magical gems that augment your gauntlet and grant new powers like gaining energy with each kill or increasingly the likelihood of a critical strike. When combined with the character progression system, by the end of my time playing, I could plow through any combination of adversaries.

Many games use choice-driven storytelling to immerse players, but Stories: The Path of Destinies takes more direct inspiration from Choose Your Own Adventure books. Learning new folds to the story with each playthrough is satisfying, but the narrative falls victim to its own concept, and after hearing a variation of the same story more than five times, I cared less and less with each successive attempt at getting the best ending. The fun combat and worthwhile character progression takes some of the sting out of the repetitious nature of the concept, but it doesn’t completely neutralize it. 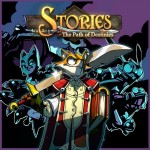 With solid top-down combat and exploration tying those decision points together, Stories delivers an interesting take on choice-driven storytelling.

Purchase More Info
7.75
i
Game Informer's Review System
Concept Adapt the choose-your-own-adventure book formula to a top-down action video game
Graphics Gorgeous vistas and vibrant colors make for some memorable locales that you won’t mind seeing again during repeated playthroughs
Sound A single voice actor serves as narrator and all of the character voices, giving the storytelling an audio-book feel. The dynamic narration bounces back and forth between clever and painful with its pop-culture references and wordplay humor
Playability Combat is fluid and easily approached, and the sensation of leveling up your character to become a true juggernaut is satisfying
Entertainment The process of learning new things with each playthrough is rewarding, but the repetition takes away from the experience
Replay Moderate