When EA debuted its new SSX game at the Spike Video Game awards, fans began to fear that the series was straying from its roots – that it was taking on a more realistic, darker edge. In truth, developer EA Canada is taking everything that made the original SSX snowboarding titles great and shaping it into something that will be relevant in today’s market. SSX (now the game’s official title) features a global playing field of at least 70 mountains for players to race down, and will boast significant upgrades to the series’ trick and upgrade systems. We talked with creative director, Todd Batty, who melted away any fears we might have had regarding the franchise’s long-awaited return.

It seems like SSX has been on the shelf of awhile, and the last few titles didn’t perform as expected. Why bring the series back now?

SSX is a franchise that fans have been calling out for, for years and years now. I can’t think of a press announcement where EA has talked about announcing a new game that doesn’t have hundreds of posts under it going, “OMG, I hope it’s SSX.” We’ve always thought that the series had a fanbase out there that still had affinity with the franchise and we’ve always thought that it was a really strong, wholly owned IP by EA Sports. There have been attempts to revive SSX over the years; different teams have put together different pitches for what a new SSX could be, but it just never felt like any of these proposals knew how to reboot SSX and make it relevant to today’s market.

When you guys debuted the SSX trailer at the Spike Video Game Awards it seemed like you might be moving away from the bright colors and crazy arcade feel of the early titles in favor of a more realistic tone. Is this true?

No, absolutely not. Our core statement from day one has been, “survive it, race it, trick it.” And in that, we have designed three major types of gameplay. One being Deadly Descent, which is all about survival gameplay. It’s a new addition to the franchise. But I’ve always thought racing was the core of SSX, and we didn’t want to go away from that, so we’re going to have Speed Descent events, and of course we’ll have tricks in our Tricky Descent events. We wanted to make sure we hit the over-the-top arcadey gameplay in all of these different gameplay modes. We decided to lead with the new Deadly Descent gameplay in that trailer, but all of the classic SSX style will be there, too.

Can you go into a little more depth about how the Deadly Descent mode will work?

We thought SSX had two types of racing before: racing and trick events. We wanted to expand on the universe of SSX. We wanted to look at how we could bring the mountain alive in a way that the mountain was putting forth a challenge for the player. If you look at past SSXs you had huge chasms that you could jump, but we wanted to do other things like that. SSX 3 kind of had an avalanche, but we thought we could do that a thousand times better with the new systems. We have an amazing avalanche design. So we’ll have more things like avalanches and rockslides, and falling stalactites. In Deadly Descent the challenge will be just making it to the bottom alive.

It sounds like you guys are branching out and covering more mountain ranges than SSX titles of the past. How big is the game going to be?

If you look at past SSX titles, the tracks you ride down are far from realistic runs. We manipulate them and pile cities on top of them to make them over the top and arcadey, and we absolutely wanted to stick to that principle, but we wanted to give people the amount of content that mega hits like Red Dead Redemption and Grand Theft Auto deliver. So in the early days we started sourcing topography data for the entire planet earth. Our main menu is a 3D model of the planet with 18 different mountain ranges highlighted across the globe: everything from Alaska, to Antarctica, to Siberia, The Calanques Mountains, the Andes, The Alps, Kilimanjaro, Mount Fuji. We’re taking you all over the planet.

We’re a little challenged with how many levels we can put on the disc, honestly, but we’re thinking it will be somewhere in the vicinity of 70 mountains. By comparison, SSX 3 had one. The hub works kind of like Google Earth. You can spin the globe around and pick a mountain range you like then zoom in on that and pick a mountain you like from there, then you get to race down the crazy arcade courses that we’ve built on top of real-life mountains. You could stand on the summit of Mount Everest and look around 4,000 miles in any direction. You can see the view from the rooftop of the world. So imagine if a slopestyle team had a billion dollars to concoct a giant SSX style track experience on top of the largest mountain in the world. That’s what we’ve done in the game, but we’ve done it all over the world. Is there a story stringing all of these events together?

We put together a loose fiction. What we felt had been done to death was, “Hey, it’s the tour! It’s the World Tour, and you’re competing on the Snowboarding Super Circuit to win gold medals.” So we decided to come up with something a little more fresh. We looked at the mountaineering sport, because there are a lot of cool goals within the sport of mountain climbing. There is something within the mountaineering community called the Seven Summits where mountain climbers try to climb to the top of the seven largest mountains in the world. So we decided to create our own thing around this called the Nine Deadly Descents, which is nine of the most iconic mountains in the world. Each one is themed by an environmental challenge and a cultural significance that makes these mountains unique from each other, but the overarching goal of the game is to work your way up from a junior boarder and survive the Nine Deadly Descents. We’re kind of thinking of them like they were boss challenges.

The trailer showed off wing suits. How will these be used in the game?

Wings suits are really cool, and if you’ve never seen one before, I highly recommend that you YouTube them, because your mind will be blown. It’s probably the closest humans have come to actual flight. They’ve actually become very prevalent in snowboarding and base-jumping communities. People put on these suits that kind of look like a flying squirrel. They jump out of airplanes or they snowboard down a super steep peak that ends in a cliff, and then pop open their arms to do a slow descent flight to the bottom. If you think about the design possibilities with these, you can jump into the air, do a bunch of tricks, pop open your wing suit, and then coast across a 500-foot gap to a safe landing. You’d get a bunch of extra trick points for that. The wing suit is one of the coolest new mechanics we’ve put in our game.

You also showed the pickaxe in the trailer, are tools like this part of a larger design system?

We want to make sure our reward system keeps people wanting to play the game for a long time. In the past, players were able to trick out their characters with new gear, but aside from a board that might let you go a little bit faster, most of the gear that you put on your character was strictly aesthetic. We want to really invest in the gear, so you can earn a bunch of new gear that gives you new mechanics in the game. So ice axes are another piece of gear that let you do things like a wall vault move in Prince of Persia, or say you jump across a chasm, and you almost make it but you slide off the edge, instead of falling to your doom, you can smash those ice axes into the wall, vault yourself up, and keep going. Players will have a lot of gear like this that they can equip to their character, which will change how they tackle a mountain challenge.

Since SSX has been away for so long you’ve probably had to make some updates to the trick system.

There were many things with the trick system that we thought we could improve on. The old trick system was always fairly two-dimensional. You’d be on a track, but there were always walls that pinned you in, so if you went off the track you always got warped back. We wanted to create an open environment where you could ride anywhere. The second thing we wanted to improve on was that the trick system of the past was 100 percent animation based, you’d press a button and get an animation, you’d press this combo of buttons and get a different animation. That’s okay, but we work very closely with the Fight Night Round 4 team, which has one of the most advanced physics systems possible, so we took the underlying code in their system and put it in our game to augment the trick system. We want players to be able to ride off anywhere, at anytime, and vault into the air at ridiculous speeds and heights, and we want players to be able to flip and spin and roll on any axis to create an infinite amount of tricks. Then we layer in all the grabs, kick flips, and all the other over-the-top tricks that SSX is famous for. We’ve looked at games like Trials HD, which have a more fluid and natural system. What they did was a kind of two-dimensional physics, so you could flip and twist your bike around at any range or speed. We’re taking that same feeling and bringing it into three dimensions. It’s actually a really easy system to use. People are able to figure out how to do some amazingly cool things without us having to tell them how to play the game.

Are any of the classic characters returning, or will you utilize the player created stuff from the past?

Being part of the Sports label, it would have been easy to say, “Let’s make it all about create-a-player, and utilize EA’s Game Face tech.” We really wanted to be cognizant of the history of SSX. I think the characters are a huge part of the heritage of SSX, and we wanted to be true to that heritage. The only SSX that had a create player was SSX On Tour and I really look at Tricky and SSX 3 as the pinnacle of the series, and those games focused on a really interesting roster of characters. So we’re bringing in a lot of returning characters, but we’ll also be introducing new characters. The only one we’ve committed to at this point is Elise, who is sort of the poster child and cover girl of SSX. Each character will also have their own starting equipment to help differentiate each character a little bit in terms of gameplay. Think of fighting games for example. What really starts to draw you to a character is whatever that character can do that others can’t. We want each character to feel like they have their own unique style and abilities.

Are you guys talking about multiplayer yet?

I wish I could talk about multiplayer because we have some awesome designs to share, but we’re not talking about it now. I can confirm that we will have a very strong multiplayer component. 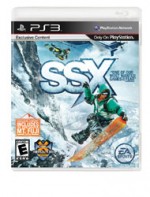