The New Shadow Of The Beast Will Include The Original As An Unlockable
by Kyle Hilliard on May 04, 2016 at 02:49 PM
Publisher: Sony Interactive Entertainment
Developer: Heavy Spectrum Limited
Release: May 17, 2016
Rating: Rating Pending
Platform: PlayStation 4 Shadow of the Beast is an upcoming PlayStation 4 re-imagining of a 1987 Amiga game of the same name. As a way of paying tribute to the original, it will be included as an unlockable bonus.

The original is notoriously difficult, so the developer Heavy Spectrum has included a version of the game that offers endless continues. That option can be turned off though, for the purists, though. In the blog announcing the inclusion of the original game, Heavy Spectrum CEO and founder Matt Birch also revealed that  the game's original soundtrack can be unlocked for use in the new game, once you gain enough mana.

For more on the Shadow Of The Beast, head here to see the game in action, and see a little bit of the original, if you're unfamiliar.

Shadow of the Beast is a PlayStation 4 exclusive, and releases May 17. 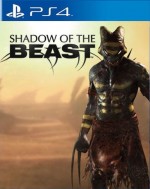