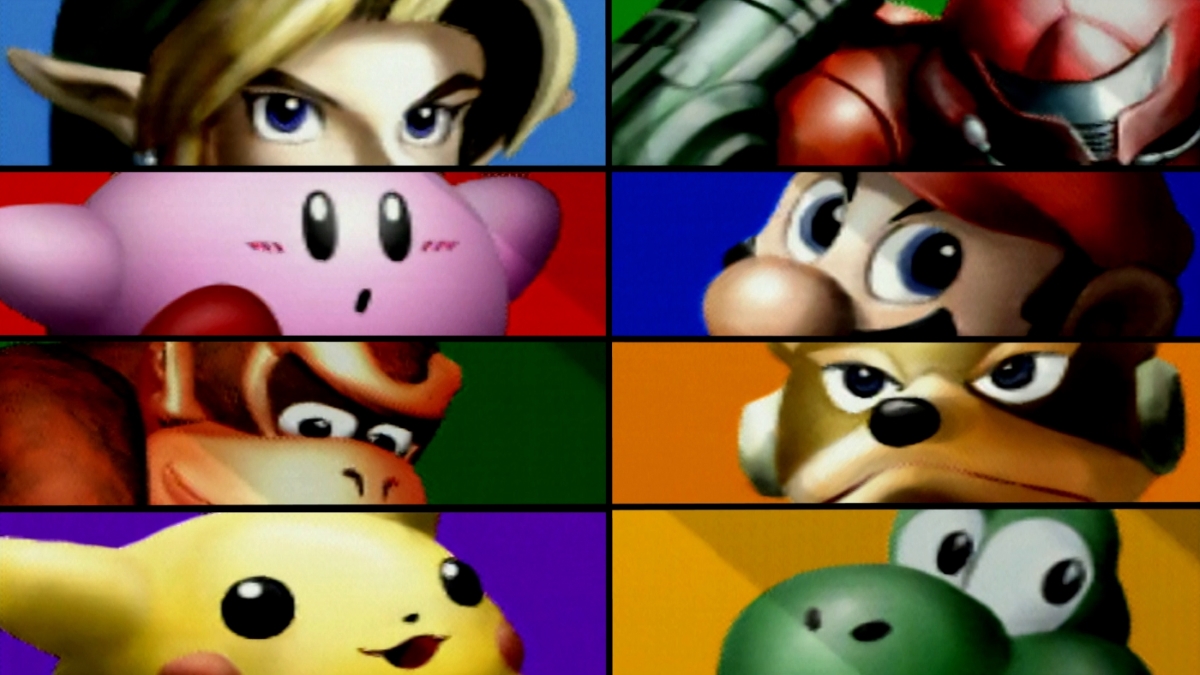 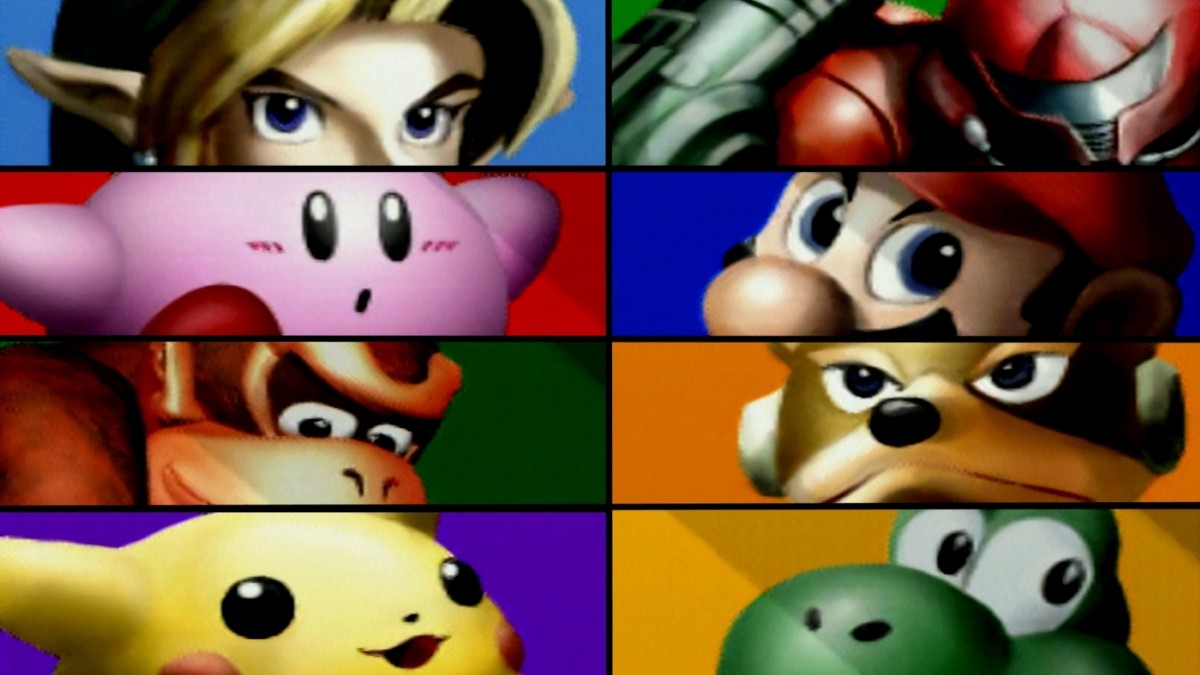 The Origin Of Super Smash Bros.

Super Smash Bros. Ultimate recently launched on Switch with 74 characters, more than 100 stages, and a soundtrack featuring more than 900 songs. Despite the massive scope of the series today, the franchise emerged from meager beginnings, starting as a passion project from a three-man team at Kirby and EarthBound developer HAL Laboratory.

Satoru Iwata and Masahiro Sakurai, the co-creators of the Kirby series, began development on a prototype fighting game in 1996. According to an Iwata Asks interview, Iwata handled all the programming for the prototype, while Sakurai worked on planning, design, modeling, and movement. One additional team member helped with the sound. The small team worked on the project alongside other development obligations.

At the time, Iwata was getting pulled to another project that took up most of his time. “I didn’t have any time during the week and had to program on the weekends,” he said. “I would assemble the data and specs, and the project slowly took shape as we sent changes back and forth.”

Sakurai said in that discussion that Iwata seemed to spring to life when he had time to work on the side project. “I felt something special about this title from the very first moment I started programming for it,” Iwata said in response to Sakurai’s observation.

The two wanted to build a four-player game that used the control stick on the Nintendo 64 while simultaneously offering a unique take on the 2D fighting game genre. Sakurai wrote “Four-player Battle Royal” on the cover of the planning document before the prototype even had a working title. 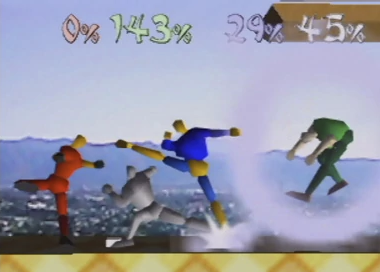 A image of the prototype that eventually became Super Smash Bros.

The two called the prototype Kakuto-Geemu Ryuoh, or Dragon King: The Fighting Game. The project didn’t use any Nintendo characters or locations, instead relying on generic, faceless characters with a photograph Sakurai took of Yamanashi Prefecture, the Japanese neighborhood of HAL Laboratory’s office, serving as the backdrop.

Sakurai knew the importance of incorporating recognizable characters for a home console release. “With a game for the arcade, it’s okay for character development to take a backseat since players are content with the fighting,” Sakurai said in the Iwata Asks interview. “With a fighting game for the home console, however, you have to set up the general image or the atmosphere of the gaming world right from the start or else the game suffers. That’s why I asked to use Nintendo characters.”

Use of Nintendo’s stable of all stars didn’t come easy. Not only did Iwata have reservations about the fan reaction to having Nintendo characters fight each other, but Nintendo also had concerns. Shigeru Miyamoto reportedly refused to let HAL use Nintendo characters. Despite this, Iwata instructed Sakurai to produce a working prototype using them anyways. Iwata took a prototype starring Mario, Donkey Kong, Samus, and Fox to Miyamoto. The demonstration impressed the famed creator and he gave the green light to HAL to use Nintendo characters for the project. 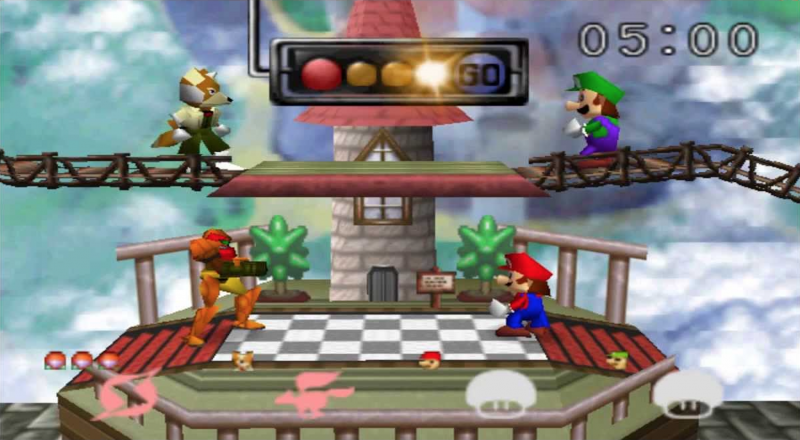 After Nintendo gave HAL the go ahead, Sakurai and Iwata set out to make a game that was accessible to a wider range of players than a typical fighting game. “I had created Smash Bros. to be my response to how hardcore-exclusive the fighting game genre had become over the years,” Sakurai wrote in a 2010 column for Famitsu. “If we want new people from this generation of gamers to come in, then we need it accessible, simple, and playable by anyone.”

With the idea that anyone could pick up the game and have as much fun as a longtime player within 10 minutes, the duo worked to craft a game that appealed to everyone. “We shouldn’t try and separate the casual gamers from the core gamers,” Iwata said in his discussion with Sakurai. “After all, everyone starts off as a casual gamer. Some of these casual gamers will end up falling in love with gaming. Despite this fact though, I think that people too often treat them as entities that are inherently different.”

Super Smash Bros. effectively bridged the gap between casual and hardcore players. Despite the cute graphics, basic controls, and roster of recognizable characters, learning the intricacies of each character and how to not only use their abilities and positioning, but the items and stages to your advantage takes untold hours.

The game shipped with 12 characters from popular franchises. At the start, players could choose from Mario, Donkey Kong, Link, Samus, Yoshi, Kirby, Fox, and Pikachu. By completing special challenges, players could add Luigi, Captain Falcon, Ness, and Jigglypuff to the crossover battlefield.

The Roster That Almost Was

In addition to the 12 characters that made the final roster of the original Super Smash Bros., several other characters were considered for inclusion. On separate occasions, series co-creator Masahiro Sakurai has said that characters like Marth, Mewtwo, Bowser, and King Dedede were all considered. In an interview for the Making of Fire Emblem: 25 Years of Development Secrets book, Sakurai said Marth came from the idea of complementing Link with another sword fighter. Nintendo’s Shigeru Miyamoto even told Nintendo Power before launch that Bowser was going to appear in the game. Each of the four characters mentioned by Sakurai have appeared in subsequent titles.

Super Smash Bros. was a big success for Nintendo 64, only being outsold on the platform by Super Mario 64, Mario Kart 64, GoldenEye 007, and Legend of Zelda: Ocarina of Time. The mission of Sakurai and Iwata of appealing to all gamers paid dividends and laid the foundation for one of Nintendo’s most successful and broadly appealing franchises.

While critics were mostly positive on the original game, the series has only strengthened since. Every console entry following the Nintendo 64 version has achieved higher than a 90 on Metacritic (the 3DS version sits at an 85 average). Super Smash Bros. Ultimate continued this tradition in December, garnering as much critical acclaim as the series has ever seen. In addition, the series served as Nintendo’s first esports hit, with dedicated communities centered around both Super Smash Bros. Melee and Super Smash Bros. for Wii U still going strong today.

Looking back, the small roster and feature suite of the Nintendo 64 game seem like nothing in contrast to the behemoth offerings that have come with subsequent games, but at the time, seeing those characters fight each other unlocked players’ imaginations. As Sakurai and his team launch the self-proclaimed ultimate version of Super Smash Bros. nearly two decades later, players can only speculate at how the series will grow and evolve from here.

This article appears in the January 2019 issue of Game Informer. Minor updates have been made to reflect the latest information.