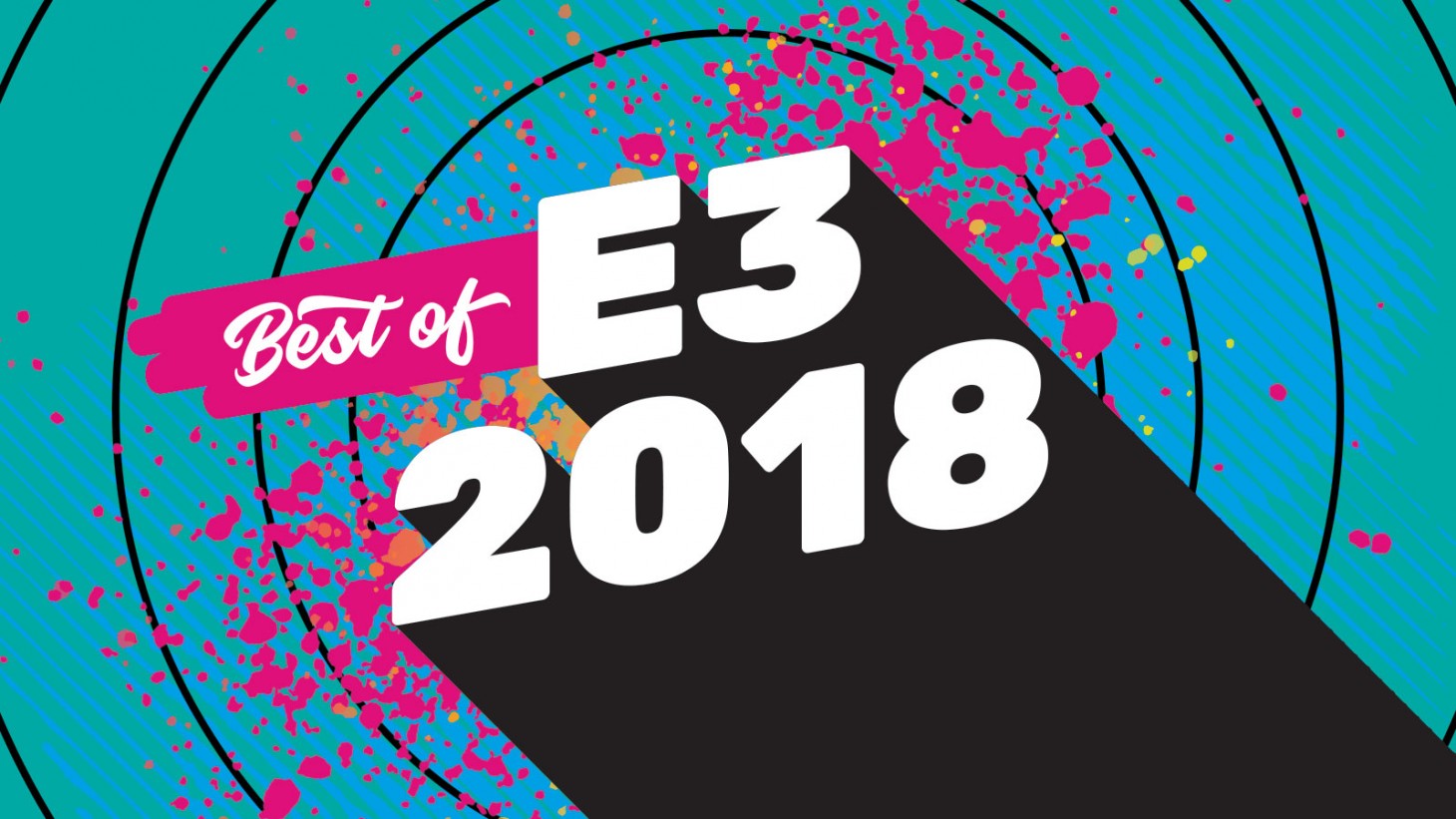 E3 2018 had no shortage of awesome games to peruse and play. Whether it was brand new announcements, gameplay reveals of secretive projects, or blow-out demos that captured showgoers’ attention, we wrote previews and features on dozens of distinct games. Today, we highlight the best of the best, with our picks for the most exciting and buzzworthy titles shown over the course of the gaming industry’s biggest week.

Until you swing through the streets of New York City, drop into a gang of bad guys, and take them down with an array of amazing moves, it’s hard to grasp just how tight and exciting Insomniac’s Spider-Man really is. The spectacular web-slinger has rarely looked better than he does in this new adventure, and we came away extremely pleased with the flow of navigation and combat. It would be a mistake to dismiss this new superhero game as just another licensed cash-grab; this is one of the most promising showcases of action gameplay in years.

After two episodic series telling the story of Max, Chloe, and Rachel, the Life is Strange series is spinning off in a cool direction. The Awesome Adventures of Captain Spirit stars 10-year-old Chris, and players see his imagination turn everyday tasks into thrilling superhero adventures. We enjoyed seeing the world from Chris’ innocent perspective, and this standalone (and free!) adventure expands the Life is Strange universe in interesting ways. We’ll have the complete picture next week, since Captain Spirit releases on June 26.

Nintendo’s E3 Direct prominently featured the company’s flagship fighter, with a deep dive into a massive roster, new abilities, and a painstakingly refined experience. With Ridley joining the most robust character selection ever, Smash is once again poised to capture the hearts and minds of both casual and competitive players. With a smorgasbord of legendary characters to pick from and a dizzying amount of maps to play on, folks will be blasting each other off the boards for years to come.

While multiplayer modes have been proliferating in all sorts of genres over the last decade, Smash remains one of the best options to join your friends in the same room. You just choose from the ridiculous array of characters, then battle away! Because couch battles have been kept alive, Super Smash Bros. Ultimate has the potential to turn your living room into a war room. Nothing is better than delivering that final smash face-to-face!

Though BioWare is famous for its single-player adventures, E3 gave us even more reason to be optimistic about the studio’s online cooperative shooter. Sure, plenty of games let you tackle missions and fight bosses with your friends, but how many of those games also have rocket-powered exosuits that make you feel like Iron Man? Focusing on co-op may be a new direction for BioWare, but we can’t wait to team up and see more of what Anthem has to offer. You can learn everything we know so far by reading our cover story right now, and keeping an eye on our coverage hub throughout the month!

Best Platformer – Ori and the Will of the Wisps

Ori’s first game put a new twist on familiar platforming elements, and the sequel is expanding on that foundation in important ways. Ori and the Will of the Wisps features the same gorgeous visual style and fluid movement, but the team is reworking combat to make it more interesting. With new weapons like a spear, axe, and bow, Ori’s capabilities have grown significantly, and we can’t wait to see more of them in action.

Playground Games has been on a roll with the Horizon games, offering up a potent cocktail of open-world exploration, car collection, and over-the-top racing. The fourth installment adds the new ingredient of regular yearly seasons, which rotate through on a weekly basis. As the game world passes between winter, spring, summer, and fall, new events open up across historic Britain, and players must adjust car handling dynamically to weather conditions like snow and rain. The environments are gorgeous, and you share the changing world and its roads with real players with whom you can team up or compete against.

CD Projekt Red gave us one of the best role-playing games of all time with The Witcher 3. Based on what we saw at E3, the team may trump that title with Cyberpunk 2077, a stunning dive away from fantasy and into science fiction. You customize your character to explore a gritty cyberpunk reality where picking at an errant thread could lead you across the city and into new (and dangerous) situations. The world looks absolutely drenched in flavor, lore, and personality. Information on Cyberpunk 2077 was sparse before E3, but this year’s show proved that CD Projekt Red is still the studio to watch for the next great RPG epic.

A rededication to squad play with new stories charting WWII settings, Battlefield V is poised to start something special for shooters. Operations mode, the sort of grand match that takes place over multiple maps, returns invigorated full of weapons, vehicles, and tactical decisions. With character customization, new modes, war stories, and even a foray into gaming’s most popular genre right now with a battle royale mode, Battlefield V is serving up a veritable bullet banquet for shooter fans.

NHL 19 was only shown behind closed doors, but given the dramatic leap the skating and physics systems are taking, it was easily the most intriguing sports game at the show. Developer EA Canada's use of the Real Player Motion tech breathes new life into the second to second action, setting up the franchise for the generational step forward fans have hoped for ever since it debuted on the current consoles.

Total War has continually reinvented itself while maintaining its strategy wargame roots. Over the past few years, the dive into high fantasy with the Warhammer IP offered an invigorating take on gigantic battles, and this return to rooted historical bloodshed promises an interesting return to form. Diplomacy plays an even more important role here, turning enemies against each other or to your aid for an edge both on and off the battlefield.

Scuf has been making high-end controllers for some time now, but we came away especially impressed by the company’s new partnership with Sony. The Vantage is extremely customizable, with removable and reprogrammable side buttons, four remappable back paddles, built-in mic muting, interchangeable convex or concave thumbsticks, and even force feedback modules. The controller plays like a dream, but you have to decide whether the hefty price tag ($169.95 for wired and $199.95 for a wireless version) is worth the potential competitive advantage.

Tetris is one of the best games of all time, and it has kept us entranced for decades. What could be better than taking that addictive gameplay and tossing it into the virtual reality tumbler? With Tetsuya Mizuguchi's eclectic and electric taste in music providing the backdrop, this visually stunning take on the classic provides a stimulating reinvention that works well in VR. The big change to gameplay is the Zone mechanic, which lets you slow down time for easy stacking and scoring - but it doesn't take anything away from the intensity of the experience.

We may have been hoping for news on Metroid 4 or the new Pokemon RPG, but even without those updates, it’s still a good time to be a Nintendo fan. If we have to “settle” for an exclusive, we could certainly do far worse than what looks like the most amazing Smash game ever in a long line of Smashes. Nintendo continues doing what it does best by putting its huge first-party IPs in the spotlight. For more discussion on Super Smash Bros. Ultimate, check out this excerpt from the Game Informer Show podcast.

Spider-Man looked great at E3, but the only place to get that webby goodness is on the PS4. Sony’s partnership with Marvel is likely to pay big dividends with this latest venture. Buzz is especially hot around the project, and it’s almost certain to be a must-buy for many PS4 enthusiasts. Due to the character’s connection to the blockbuster Marvel movies, we’d some new fans may consider a PS4 purchase just to live out the fantasy of Peter Parker’s wild life. For even more info on this title, you can read our full May cover story online for free!

Best Microsoft Exclusive – Ori and the Will of the Wisps

Microsoft used its presence at E3 to showcase its third-party support, which resulted in few exclusive offerings. However, the slim competition shouldn’t diminish this victory for Ori and the Will of the Wisps, which looks amazing and appears to be a worthy follow-up to the much-loved original. Plus, unlike some “exclusive” titles, the odds of this Microsoft-published title ever moving to other platforms is basically zero.

Titles exclusive to PC can often be hidden away from the big console stage reveals during E3, but we have a clear standout this year with Total War’s upcoming title. While the classic strategy franchise continues to attract more players by diversifying offerings outside of history, the core of Total War has always been in its historical fare. We’re looking forward to exploring giant conflicts in 190 CE China.

From Software’s take on what appears to be a character-action game instead of an action-RPG threw us for a loop. It isn’t the Bloodborne 2 we had been hoping for, but we’re incredibly curious to see how Sekiro plays out. It has new death mechanics, no stats/weapons/armor/leveling, and a more focused tale of vengeance. While we don’t know exactly how From Software’s new title is going to shape up, this unexpected direction certainly made a good impression.

You can’t blame people for getting excited about sequels, but the thrill of exploring unfamiliar territory is unique. Among the new IP at E3, Ghost of Tsushima dazzled show-goers with its swordplay, striking art direction, and intriguing premise about a lone samurai fighting Mongol forces. While some fans undoubtedly wanted to see more of the Infamous series, we’re glad to see developer Sucker Punch taking a chance on something different.

Even with so many worthy competitors for the crown, Cyberpunk 2077 pulls ahead of the pack to win our Game of the Show award. With style and substance both on display, this dark vision of the future came to life at E3 and we can’t wait to see more – lots, lots more. While the trailer might spark interest, be sure to check out our impressions from a much deeper dive into gameplay to find out why this title is jacking in to our neural implants for the foreseeable future.