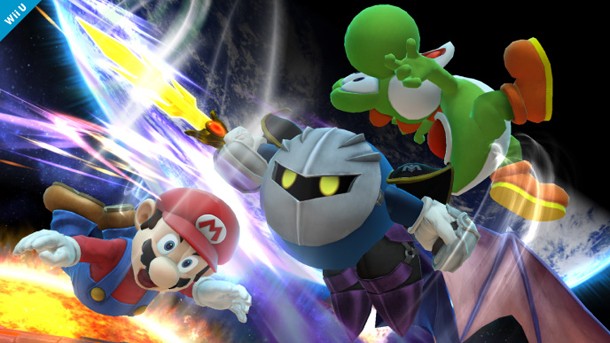 After making his first appearance in Super Smash Bros. Brawl, Meta Knight will be returning for the Wii U and 3DS version of the fighter.

On the Miiverse post accompanying his reveal, director Masuhiro Sakurai wrote, "'Looks like there was an impostor in the earlier posts, so I introduced him to my sword!' ...I'll leave it up to your imagination if he really said that or not. The veteran hero, Meta Knight, returns to battle!! We didn't forget the Battleship Halberd either!!"

Met Knight has apparently gone through some gameplay changes for his second appearance. Sakurai writes on the Miiverse, "Meta Knight's Up Special Move, Shuttle Loop, changed quite a bit in this game. The glide is gone, and the attack slashes opponents twice while spinning in a large loop. This has turned into a highly technical and effective move." You can check out some more image of Meta Knight in the gallery below.