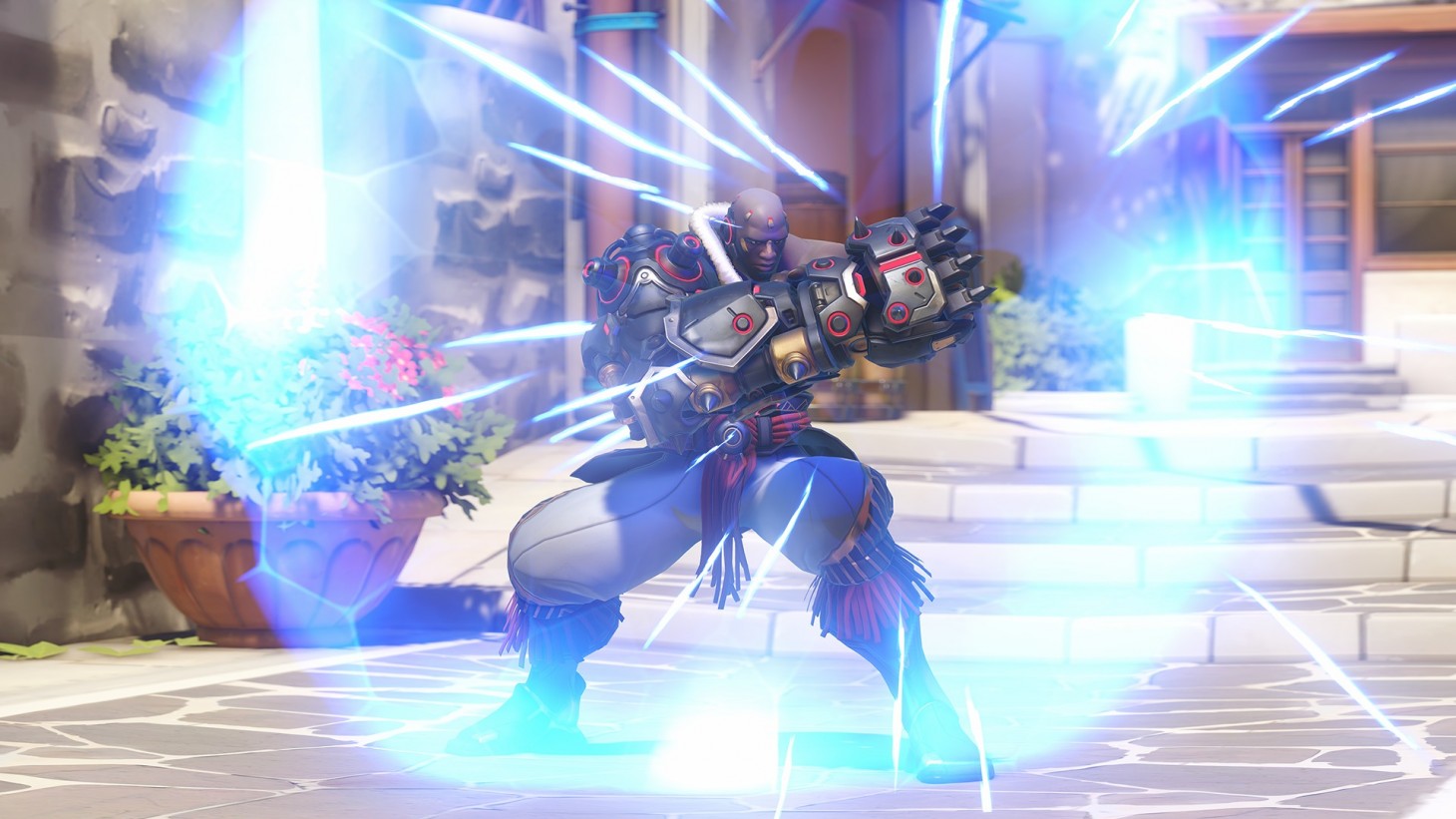 Following a 2019 reveal that had fans thinking Overwatch 2 was within reach, the development team at Blizzard went dark following a series of delays and departures of key team members (including Overwatch director Jeff Kaplan). As the development timeline stretched on, the once-abundant and enthusiastic player base showed signs of dwindling and discouragement as live-service support for the first Overwatch dried up.

However, last month, Blizzard emerged from its largely incommunicado state to reveal that Overwatch 2's PvP and PvE content has been decoupled and that it's holding a PvP beta at the end of April. Things finally seem back on track, as the studio continues giving more information about the highly anticipated sequel. With the anticipated beta test mere days away, we're poised to learn a whole lot more about Overwatch 2. However, before that test kicks off, Blizzard opened the floodgates, revealing plenty of details about changes coming to the game.

The team looked at a sequel to its popular live-service hero shooter as an opportunity to re-examine every aspect of the game. One element of the formula undergoing major changes is the competitive multiplayer's transition from 6v6 to 5v5. "We had this big moment where we were going to make this other game essentially, and so there's no really better time to try experimenting with really big changes," lead hero designer Geoff Goodman says in a virtual roundtable interview. "Where we started with the 5v5 thing was one of the earlier experiments. We were just like, 'Well, let's take this all the way back to the conversations we had when we first started working on Overwatch 1.' What are the engagement ranges? What are the team sizes? Are we happy with everything the way it is? Because a lot of those changes are pretty hard to make. It's not even just like a balance or a design decision to decide on something like 5v5; there's a lot of technology involved with memory footprints of all the characters and what our bounds are." 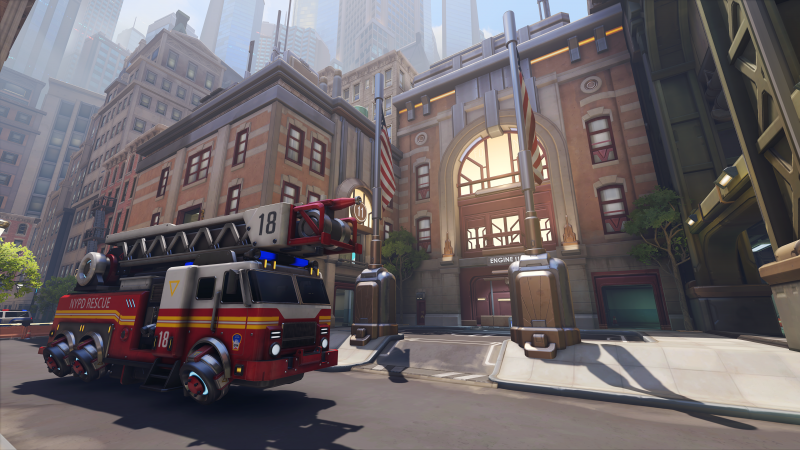 It's been around six years since Overwatch players grew accustomed to the 6v6 team builds, often consisting of two damage heroes, two support heroes, and two tanks. With Overwatch 2, the player count drops by one participant per team, meaning team compositions will need to adapt. Now, teams will only bring one tank into battle, and with that, several characters receive noticeable tweaks to their abilities, while others receive major overhauls.

This isn't the first time Blizzard has made major changes to Overwatch's heroes or even its core gameplay. However, with Overwatch 2 introducing so many sweeping changes to both its player counts in matches in addition to its heroes, the developers ran the risk of turning those longtime players off. However, Blizzard saw the potential rewards and "hyped" themselves up to take these leaps of faith.

"This is our opportunity to do these big things, some of the stuff we've talked about for a long time and just try crazy things," Goodman says. "We were just trying everything. We tried tons of map experiments too. It was sort of an exciting time for us in a way because a lot of us were around when we started Overwatch 1 and it was kind of that atmosphere again. It's like, man, if everything's up in the air, let's treat this like anything could go... whatever we can try. Certainly there's a lot of risk there and there were times where we pushed maybe too far [...] but I think we were more on the side of very open to everything. We weren't trying to make changes for change sake. We had to be pretty excited about it, especially in a world where a lot of players are very invested and into Overwatch 1 and we don't want to alienate players. We have to be pretty confident that the game is going to be better for it."

With those mindsets in place, Blizzard today announced the overhauls of two post-launch heroes from Overwatch 1. 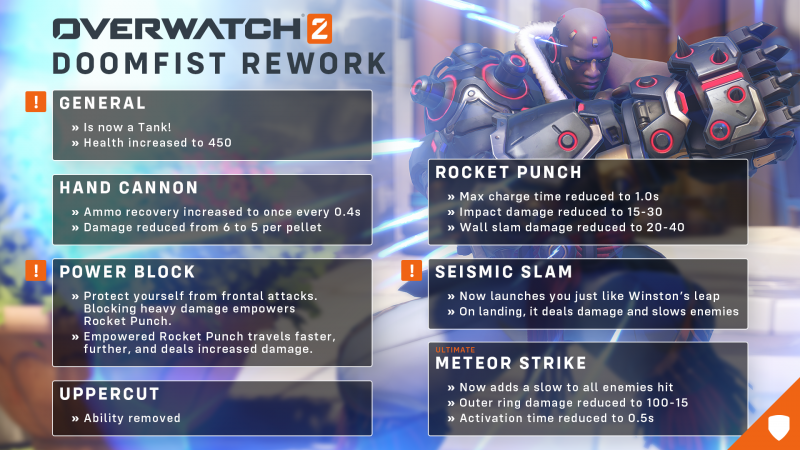 Doomfist is a perfect example of the kinds of seismic shifts some heroes receive in this sequel. No longer a damage hero, Doomfist comes into Overwatch 2 as a tank. However, the unique hero retains a lot of what makes him unique in Overwatch. This shift away from his status as a DPS-focused character brings with it a huge health increase, bumping his HP from 250 to 450. His Hand Cannon stays largely the same but instead recharges its ammo quicker at the expense of its damage-dealing capabilities. Doomfist's signature Rocket Punch is also quicker while dealing less damage, but it keeps its knockback power.

Where Doomfist's new kit really differs itself from his Overwatch 2 build is in his new Power Block move, which reduces incoming damage to the front by 90 percent. After he absorbs damage, his gauntlet charges, and if he brings in enough damage through Power Block, his new Rocket Punch will become empowered and travel faster and further, deal more damage, and knock targets back further. This is meant to further capitalize upon the inspiration Doomfist's kit takes from fighting games; Power Block is meant to be treated almost like a parry.

"Opposing players should be cautious about charging Doomfist’s gauntlet," Goodman said in the blog post. "Power Block feels kind of like Zarya when people shoot into her shields, but instead of passively gaining damage, his next punch will get a buff that lasts until he either uses Rocket Punch or is eliminated."

Doomfist's Seismic Slam now launches him into the air, similar to Winston's leap. However, once Doomfist lands, he sends out a shockwave that slows nearby enemies. While this adds to his mobility, it removes the unpredictability of his movements. The team at Blizzard imagines this will put him alongside other disruptor tanks such as Winston and Wrecking Ball.

Rounding out Doomfist's new kit is a new iteration of Meteor Strike, his ultimate ability. The ability gains a shorter cast time, but it deals reduced damage and no knockback. Instead of knocking targets back, Meteor Strike now slows all enemies hit. Blizzard also assures players that even if the damage is reduced, finding yourself in the bullseye of a Meteor Strike still packs a punch. 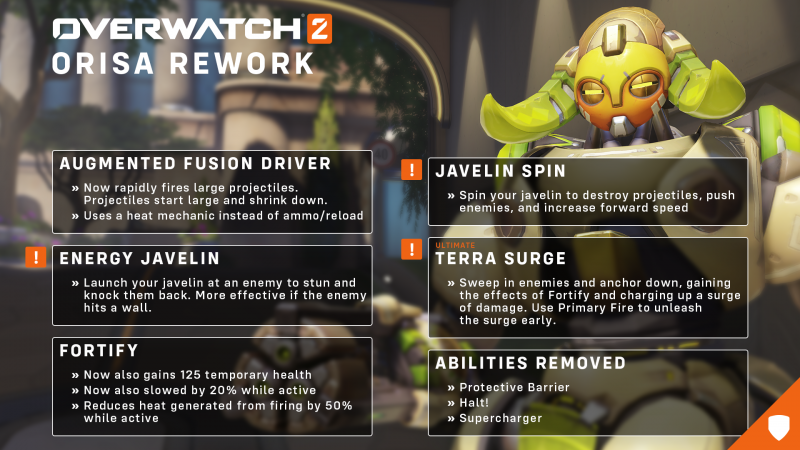 While Doomfist's shift turns him more defensive, Orisa is becoming more offensive-minded after the team noticed she loses many up-close battles. Right off the bat, health and armor increases will assist her with those scenarios, but that's far from all Blizzard is doing with Orisa's rework. Now, instead of operating off the ammo system she currently uses in Overwatch 1, Orisa's primary fire is a larger projectile that deals more damage the closer she is to enemies and uses a cooldown system that activates if you overheat her weapon; if you fire too much without allowing it to recover, her gun becomes unusable for three seconds.

"We want Orisa to push and engage enemies more," senior hero designer Brandon Brennan said in the aforementioned blog post. "Her gun encourages her to get close to enemies and play more forward in Overwatch 2."

Meanwhile, Orisa's secondary fire, Energy Javelin, is now a skill-shot projectile javelin that hits the first enemy in its path, dealing a micro-stun and extra damage if it pushes them into a wall. Keeping with the offensive and javelin-based themes, those pesky Orisa barriers are no more; instead, Javelin Spin lets Orisa spin a javelin that destroys enemy projectiles, increases her movement speed, and knockback/damage enemies. While not a new ability, Fortify has been modified to reduce her primary-weapon cooldown needs and grant 125 extra health.

Her ultimate ability is another new trick in her arsenal. Terra Lance causes Orisa to become fortified and pull in nearby enemies while she charges up an area-of-effect attack. While this sounds similar to Zarya's Graviton Surge, enemies stuck in Orisa's Terra Lance aren't trapped in the center, so teammates will have to capitalize on it quickly if they want to take advantage of several enemies in one place. 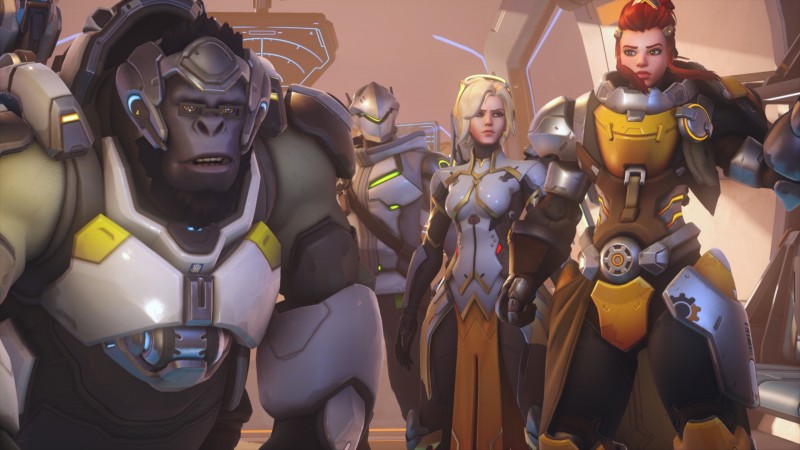 As the lack of content in Overwatch 1 continues to shrink the community, the team's sole focus is on Overwatch 2. This wasn't always the plan, though.

"We talked about it way back; we talked about how we were going to – on the production side – how we were going to develop Overwatch 2 alongside Overwatch 1. One option we had, which was what we ended up going with was, 'Maybe we have to chill out on Overwatch 1, but that will let us come out with Overwatch 2 faster.' So it's like ripping the Band-Aid off kind of deal. That's the plan, but then suddenly, that time that we were hoping was some small amount of time became a large amount of time, and now, we're so invested in this plan and we have everything so connected with all the heroes we're making and the hero reworks and everything, we can't even really break out of this plan. You can't take a piece of the game and throw it in live. It just doesn't work. It was unfortunate. The whole team was really just kind of upset and kind of annoyed a bit with the timing of how everything got delayed and there were a lot of reasons for it; it wasn't just one thing. But I think the biggest thing now is we rallied around this release date and getting PvP out there and getting back to form and getting content in people's hands because as much as the players love to have that content, we love making it for people." —Geoff Goodman, Lead Hero Designer on Overwatch 2

Overwatch 2 does not currently have a release date. If you'd like to read our exclusive coverage from 2019, head to our coverage hub to get our impressions from our time spent with the game and the developers.