Destiny 2 has had more than its fair share of ups and downs since launch. Various blogs and roadmaps Bungie has released over the past year document how the developer has responded to fan feedback, improving the many loops and loot at play in its shooter. But while players continue to invest dozens of hours in this online shooter, many others find the experience lacking; after some communicative snafus (including an deceptive experience bar) and two expansions that added more activities but didn't do enough to make players' investment feel meaningful, the repetitive grind and lack of a long-term endgame continue to rear their ugly heads.

But this has happened before. The original Destiny launched with similar issues, but with The Taken King expansion, Bungie managed to turn the ship around; because of this narrative, the studio knows expectations are high for Forsaken to do the same for Destiny 2. Matt Miller recently had the chance to take an extensive, hours-long look at the nearly every aspect of the expansion, playing several hours of the campaign and getting hands-on time with Gambit and some of the other key changes hitting in September, including the new weapon slots, supers, and more. And while one can never be certain about the long tail of living game, what we've seen has us excited for Destiny 2's second year.

Online, we'll also have exclusive coverage throughout the month, detailing how, exactly, Bungie plans to round out Destiny 2’s rough edges while also building a more mysterious, enthralling world for players to explore. We'll have videos taking a look at how The Dreaming City will act as a hub for Destiny 2's endgame, the story behind Forsaken's new enemies and bosses, an extensive look at Gambit, another new multiplayer mode and, of course, a thorough inspection of a brand new exotic weapon. 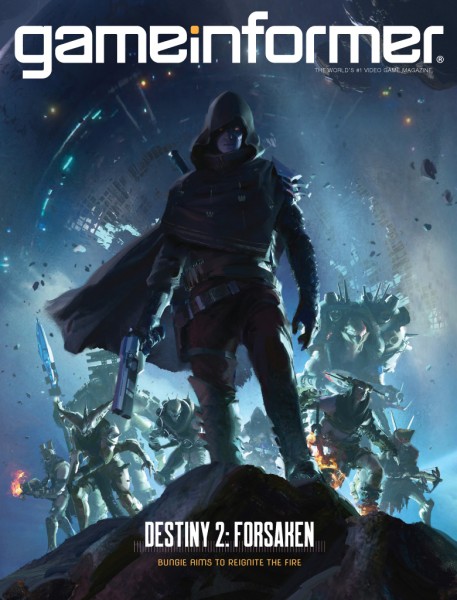 Our August issue is also packed with info on tons of other games. E3 gave us lots to be excited about, and we break down how the console makers fared in their press conferences while also highlighting the 50 best games we saw at the show. For more on marquee titles like Cyberpunk 2077, The Last of Us Part II, and more, make sure to read the entire issue.

Print subscribers can expect their issues to begin arriving in the next few days. The digital edition of this issue launches today for PC/Mac, iOS, Android, and Google Play. You can also get the latest issue through third-party apps on Nook and Kindle starting tomorrow. To switch your print subscription to digital, click here, or to create a new subscription to the digital edition, click here.

Click the banner below to visit our Forsaken coverage hub, and check back throughout the month for new stories and information.