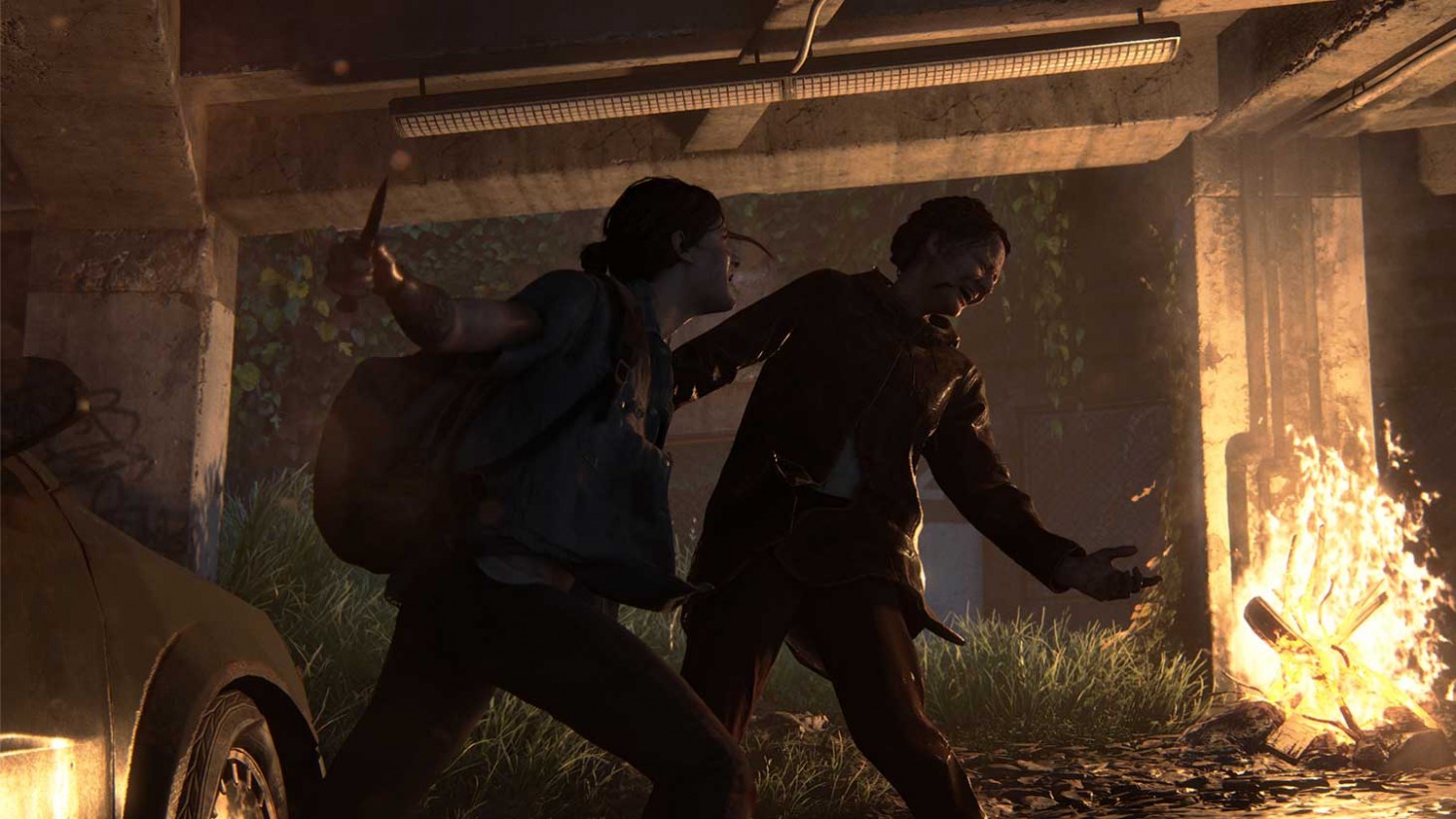 The Last of Us Part II trailer was brilliant for its contrasts. It showed us the brightest and darkest of what the world can be. Ellie is 19 and navigating the new and exciting waters of love, but it’s just a respite in what is otherwise still a grim and dangerous reality. The pairing of these contrasts is something developer Naughty Dog is ideally suited for. It has the ability to convey the rush of different emotions in Ellie's face as she kisses Dena, while also allowing players to fluidly move and act in violently brutal ways. I talked to writer/director Neil Druckmann and new co-writer Halley Gross about the world of The Last of Us Part II and the complex characters that inhabit it.

The first trailer for The Last of Us Part II back in 2016, revisited Ellie, who is in a vengeful frame of mind. Five years past the first game, she has grown up and hardened from her experiences, hinting at what must be the unfathomable toll of living in this harsh reality. This is perhaps thanks to Gross. “I’ve always been really interested in trauma and the effects of trauma on the soul.” she said. “So when Neil pitched me on this game almost two years ago now, I was just like like, ‘Yeah, this is the stuff I’m really into to.’ So the opportunity to have that conversation in a post-pandemic environment with a character as complex as Ellie was impossible to shy away from.”

Druckmann says Gross fit right in, even though she’s coming into a world and characters that started without her. “What’s awesome is day one Halley jumped in and was not afraid to say, ‘We need to make some big changes here. What if we make this character had this totally different thing?’ It was awesome, and she totally took ownership of all of it, and now we can say we’re owning this story together.”

The game’s trailers so far have alluded to an antagonistic threat to Ellie and other characters called the Seraphites. They are a group of religious extremists who speak of sin and apostates, and who have a penchant for hanging people. “You get the hint that there are certain rituals they perform on people outside of their religion,” say Druckmann. “They’ve existed since the outbreak and they have a very nuanced, interesting history at how they’ve arrived at this point.”

If the Seraphites violently express their faith, is it possible that Ellie’s homosexuality is anathema to their beliefs? Druckmann and Gross didn’t address this point specifically, but I did ask them if her sexuality served as background for her character and/or if it was something others in the world would respond to. “I don’t think we necessarily want to get into the larger narrative,” says Gross, “but we’re really excited to show all facets of Ellie’s personality. Part of that is who she’s attracted to, what her relationships are, who she’s willing to play for, so part of that is addressing her sexuality, for sure.”

“Our approach has always been, ‘How do we write these characters as honestly as possible?’" says Druckmann. “We’ve already established that Ellie is gay in [the Left Behind DLC for the first game]. She’s 19 now. She’s living in somewhat of a peaceful community. It felt very right to explore a romantic interest.”

Regardless if Ellie’s sexuality matters to the Seraphites, they're clearly a dangerous group. The recent trailer showed them communicating and coordinating with each other to pinpoint Ellie’s location, which is something that Druckmann says is part of the game’s advancement in its A.I. The game’s levels are larger and have more verticality, so enemies need greater awareness to cope with this. They whistle to each other and gradually gather in numbers instead of having everyone instantly aware of your position as soon as you’re spotted like in the first game.

Although the E3 trailer featured only Ellie in combat – and she was more than holding her own – Druckmann says that Naughty Dog titles have always been about having a companion. He says the developer has made a lot of strides in pathfinding, A.I., and making the companions “feel more human,” that should make any allies with you more realistic than in the original Last of Us.

Of course, no companion means more to Ellie than Joel – who’s only been alluded to so far, but who is undoubtedly a big part of this new game. I loved The Last of Us’ ambiguous ending and how it put its weight on the trust in the pair’s relationship. While that moment is in the past, it still reverberates five years on.

“We made and wrote the first game to stand on its own,” says Druckmann. “We wouldn’t make a sequel unless we felt like there was something equally important to tell. Even when we did Left Behind, there was that fear of, ‘Are we hurting this?’ Left Behind was a huge success, and fleshed out the characters further. Here there was this opportunity not only to tell what we thought was a very important message that we believe in, but to flesh out a complex character in even more interesting and nuanced ways. And if we’re going to do that, you can’t ignore that ending. You can’t just shy away from it.”