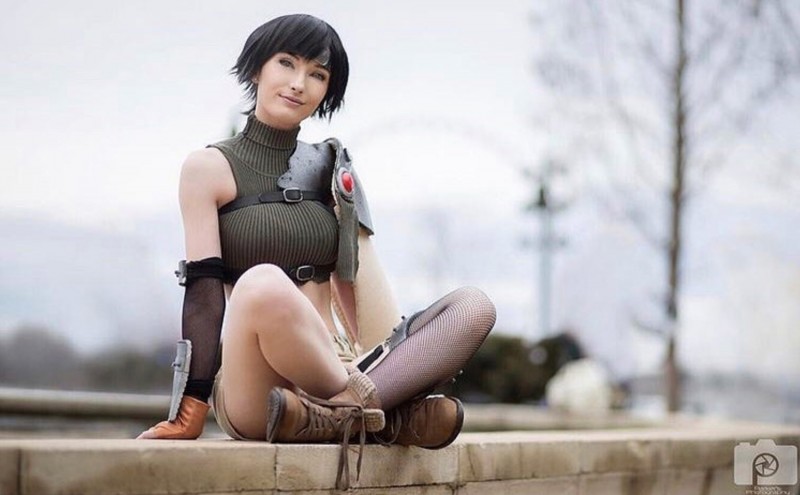 We’re obsessed with cosplay as much as everyone else is, and we’ve seen our fair share of incredible takes on Final Fantasy VII’s endearing cast. Last year, Briana White’s magical photo shoot of Aerith (she also voiced the character!) stunned the jrpg community. And with Remake Intergrade slated for a summer release, we’ve all been appropriately blessed with an awesome Yuffie cosplay too.

Kainosaurus’ (also known as Kairannosaurus Rekt on Twitter) badass portrayal of Yuffie evokes everything that makes the fan-favorite ninja so great. Check out the photo(s) above by @photoNXS and then head over to their Instagram to see all of the other characters that they’ve brought to life – from Demon Slayer’s Tanjiro to everyone’s favorite water-Pokemon gym leader, Misty. Kainosaurus not only gets Yuffie’s outfit and cunning smirk right, they also bring out the famous Shuriken in some of their photos, reiterating how badass, irrevocably confident, and sometimes silly Yuffie can truly be.

Remake Intergrade is a continuation of Final Fantasy VII Remake’s narrative. We’ll be able to play as Cloud and his companions once again but with visual enhancements and quality-of-life tweaks (among a bevy of other cool features), but Yuffie takes the main stage in her own standalone episode, titled INTERmission. Aside from employing her flashy, acrobatic melee combos, you’ll also be able to throw her throwing star at enemies meaning that she’ll be a capable fighter at multiple ranges.

Multiple gameplay screenshots of Yuffie’s ability kit were revealed earlier this month, but how she’ll be tied into Remake’s story – whether that be similar to the original game’s trajectory or completely different this time around – will likely be unpacked in the coming weeks leading up to the episode’s release. Final Fantasy VII Remake Intergrade launches for PlayStation 5 on June 10.

What do you think of Kainosaurus' cosplay; are you just as captivated by it as we are? And are you excited to dive into Remake’s next chapter?