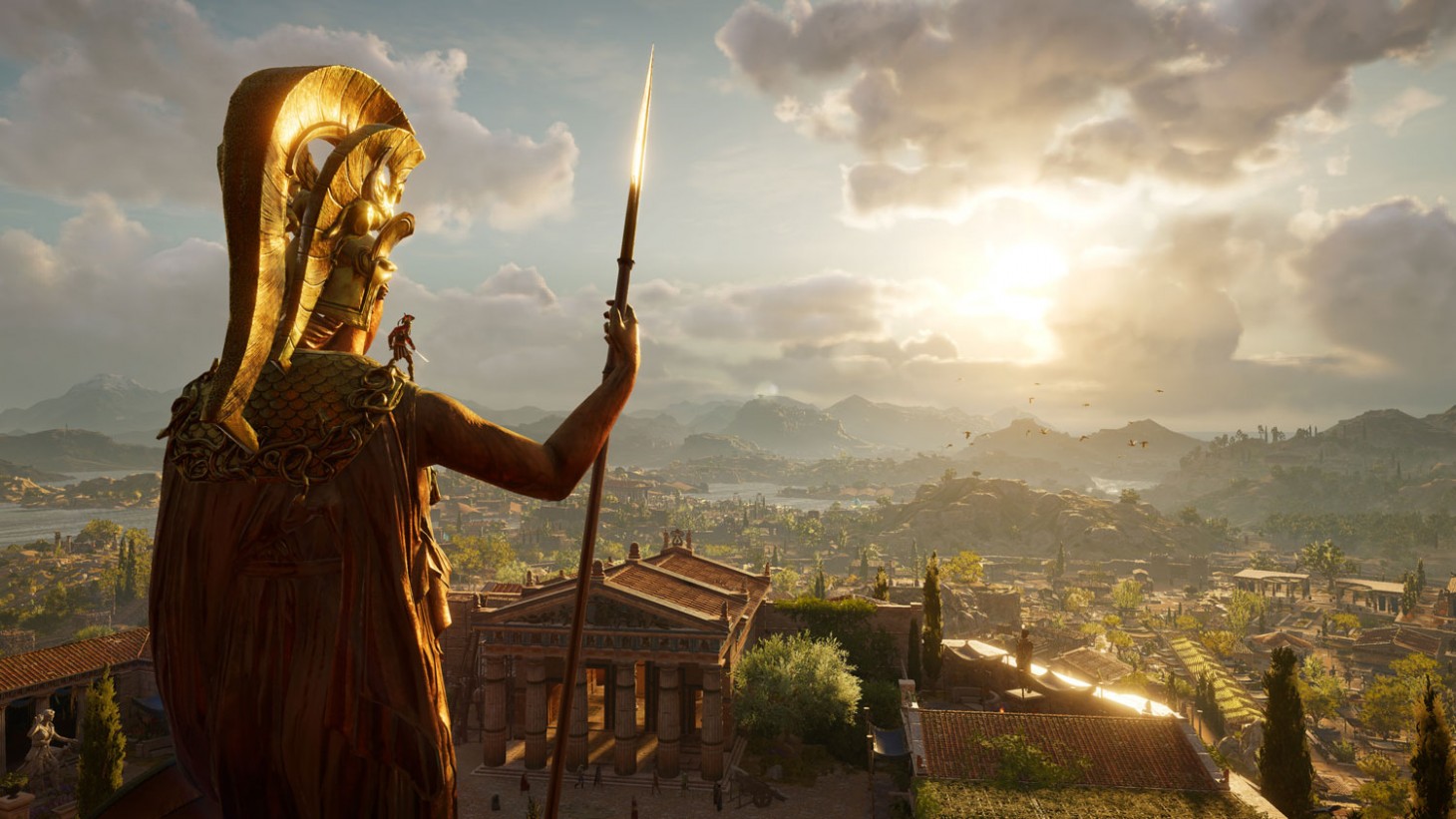 With everything to do in Assassin’s Creed Odyssey – assassinating people, assembling your crew, starting romances, etc. – you may be too busy to notice that in ancient Greece, you walk among gods and heroes. Like Assassin’s Creed Origins, ancient culture informs much of Odyssey’s narrative. “It is part of the fabric of Greece, what they believed in,” Jonathan Dumont, creative director of Assassin’s Creed Odyssey, explained. “It’s their interpretations of their gods and their mythology. We felt if we didn’t include it, it would have been a little bit weird. If there’s a time period where it’s much more of a mix of myths and history, it is ancient Greece."

Myths and history soak the stones in every location and, since the game is coming out this week, reading up on all ancient Greece before 431 BCE would be a stretch even for the most zealous student. But that’s okay, we’ve written a SparkNotes version of popular myths or need-to-know history from one location in each of Odyssey’s seven regions. 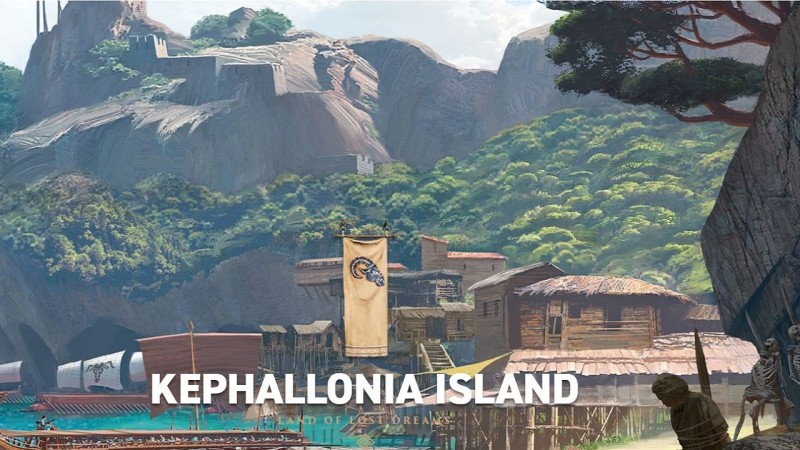 The “Odyssey” in Assassin’s Creed Odyssey comes from Odysseus, King of Ithaca. His name is literally synonymous with long, arduous journeys; a good heads up on what the game’s about.

About 700 years before Kassandra or Alexios, Odysseus sets off from Kephallonia to fight a quick little war. Ten years later, everyone is tired of the stalemate, and Odysseus invents the analog version of a Trojan virus to get it over with. After his decade-long struggle, Odysseus sails for home but then he makes a series of unfortunate and dumb decisions that delay his homecoming another 10 years. Some of the highlights include: blinding a god’s cyclops son, shacking up – twice – with a beautiful island dweller, and leaving a bag of unfavorable winds lying around to be opened by his curious crew. When he finally returns home, Odysseus finds his house overrun with men trying to convince his wife to marry them. It took him 10 years to make a journey that should have been a couple months tops and they were all sure Odysseus was dead.

Luckily for his ancestors that we meet in Assassin’s Creed Odyssey, Odysseus fights the would-be suitors then gets back to ruling his kingdom. Our assassin’s journey will also start in Kephallonia, and, even though there are a ton of things to do in the game, hopefully it won’t take 10 years to finish. 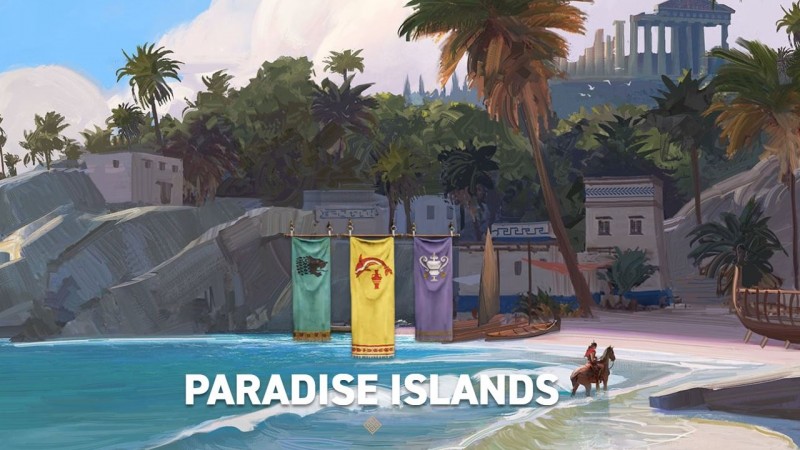 Off the southeast corner of the Grecian mainland lies Assassin’s Creed Odyssey’s Paradise Islands region. Among the islands is Naxos, where Theseus invented ghosting. He got some good press for that whole killing the Minotaur thing, but, when he told other people the story, he left out a major detail: Ariadne. The daughter of the evil king Minos, Ariadne took a shine to Theseus and slipped him a ball of yarn on the sly. That’s not a euphemism, she gave him a literal ball of string and tied one end to the entrance, so he could find his way out of the labyrinth once the Minotaur was slain.

To be fair, Theseus managed the killing on his own, but only reemerged due to Ariadne’s clever trick. Victorious, the young couple sails off into the sunset, stopping on Naxos for a little partying. What does Theseus do next? He sneaks onto his ship while Ariadne is sleeping and sails off; marooning her on the island. Jokes on Theseus, though. Dionysus, the god of wine and partying, spots her and marries Ariadne himself. In the game, you can explore Minos’ palace and wander through Odyssey’s take on the unsolvable labyrinth. Just be sure to watch for the string. 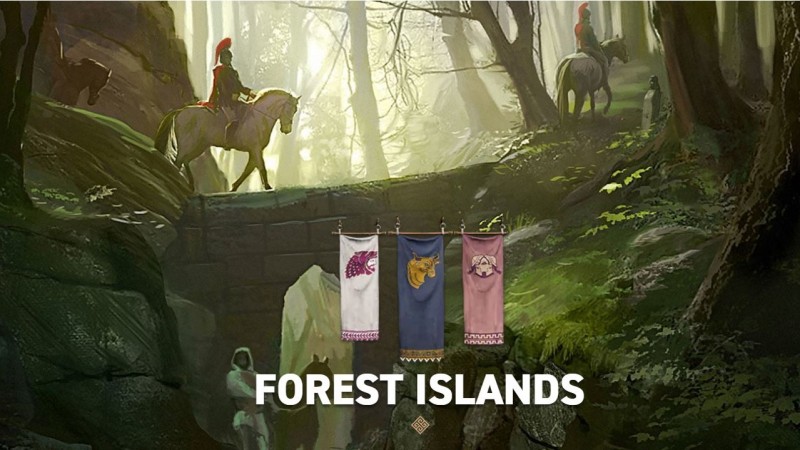 To get it out of the way, yes, the island of Lesbos’ name means exactly what you think it does. It’s located in Assassin's Creed Odyssey’s Forest Island region and was home to the renowned female poet Sappho about 200 years before the game. The only written work we have left from Sappho is an ode to Aphrodite, goddess of love. In fact, most of her critically acclaimed work harped (or should I say lyre-d) on one beloved or other.

Well, the Greek patriarchal society saw a successful independent woman and said, oh no hold on, she’s probably sleeping around. One bizarre logical leap, coupled with her fondness for her female students, and poof, Sappho’s homeland becomes a byword for queer women. You can discover Sappho’s school on the island, but Assassin’s Creed Odyssey focuses less on love and more on war in this region, as one of the major cities, Mytilene, surrendered to Athens following an ill-fated rebellion. 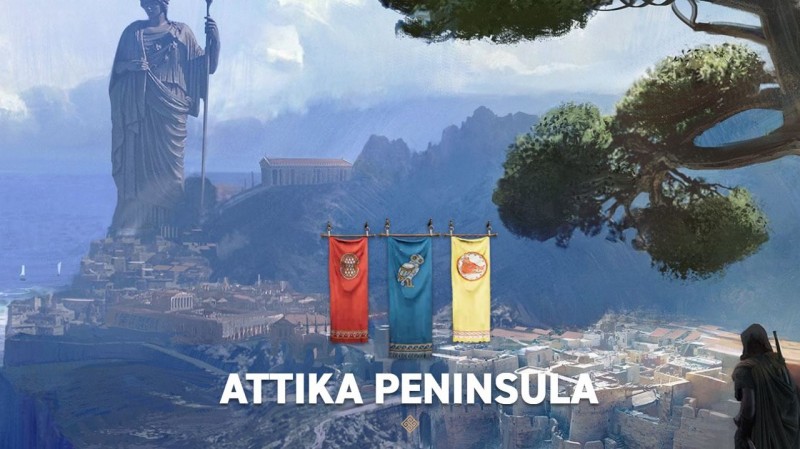 Athens, the seat of power in Attika goes toe-to-toe with Sparta in the Peloponnesian War, the bloody backdrop for Assassin’s Creed Odyssey. Despite the brutal war, Athens at this time is a cultural crucible where artists, playwrights, politicians, and philosophers flourish.

Basically, any ancient Greek you learned about in school is right here. Perikles is acting midwife to democracy; Phidias – the guy who sculpted one of the seven wonders of the ancient world – builds the statue of Athena for the Parthenon; Athenian-born Socrates is fathering Western philosophy; and Sophocles is debuting the play we’ve all read about a man who kills his dad and accidentally sleeps with his mom. One of the most densely packed cities in Assassin’s Creed Odyssey, you could spend a ridiculous amount of time in Athens rubbing elbows with these larger-than-life figures. 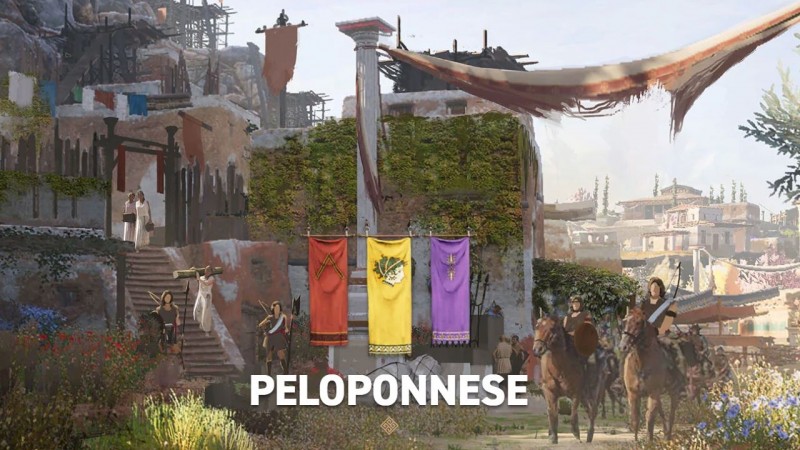 Meanwhile in the Peloponnese region, Spartan warriors begin grumbling that Athens is overstepping its authority and Argos is right in the middle. The people of Argos flip flop several times during the Peloponnesian war to defend their illustrious homeland, and who could blame them? Argos produced Perseus, the guy that killed the monstrous Medusa. His story begins, as a ton of Greek myths do, with a prophecy. The King of Argos, Acrisius, was told that at some point in the future his grandson would kill him. He did what anyone would do in that situation, and locked away his currently unwed daughter, Danaë, in a tower with a lovely skylight.

Unfortunately, Zeus spies her through the roof and is so taken by her beauty, he transforms himself into shimmering rain and impregnates her. Unwilling to kill a god’s son directly, the king stuffs his only daughter and his grandchild Perseus into a box and throws it into the ocean. Messed up. However, Perseus overcomes his childhood adversity to become a lauded hero, defender of princesses and slayer of monsters.

Despite Acrisius’ best laid plans, Perseus does end up killing him completely by accident. Perseus enters a track and field competition, throws a discus too far, and strikes the unsuspecting king of Argos on the head. Assassin’s Creed Odyssey calls Argolis the birthplace of medicine, it’s too bad that Hippokrates' oath wasn’t any help to Acrisius. Keep this backstory in mind as you are sure to run afoul of Perseus’s nemesis Medusa, and it makes a good story for entertaining children in another quest. 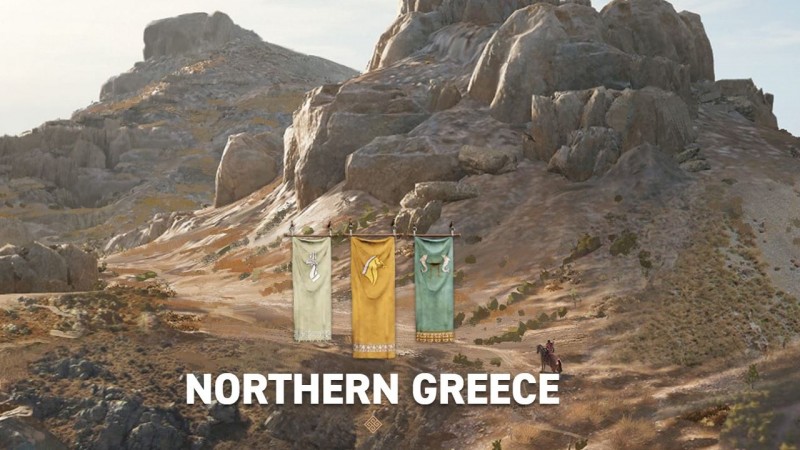 The Greeks love their prophecy. They built numerous temples to Apollo, skilled in foresight, but none quite so grand or as respected as the one at Delphi. You can find this temple in Phokis, an area found in Assassin’s Creed Odyssey’s Northern Greece region. The site was so venerated that mighty Herakles decided to make a stop when he got into trouble.

Herakles had a disagreement with King Eurytus who, in an extremely ill-advised move, refused to wed his daughter to the dumb mountain of muscle after Herakles won an archery contest. In a fit of rage, he killed the king’s son. Herakles figured that the Oracle at Delphi would know how to help him lift the stain of murder, but she refused to talk to him because he was spiritually unclean. He got angry, again, and attempted to steal the tripod – a seat the Oracle sits on – to set up his own oracle. Apollo appeared in all his godly wrath to wrestle his witless half-brother and the tug of war only stopped when papa Zeus separated the two.

Though you won’t be meeting Herakles in Odyssey, you will meet Supideo, a recently returned pilgrim to the Oracle of Delphi. The Oracle told him that he would harm his parents and, like many legendary figures before him, he unexpectedly fulfills the prophecy – with your help – while trying to change his fate. 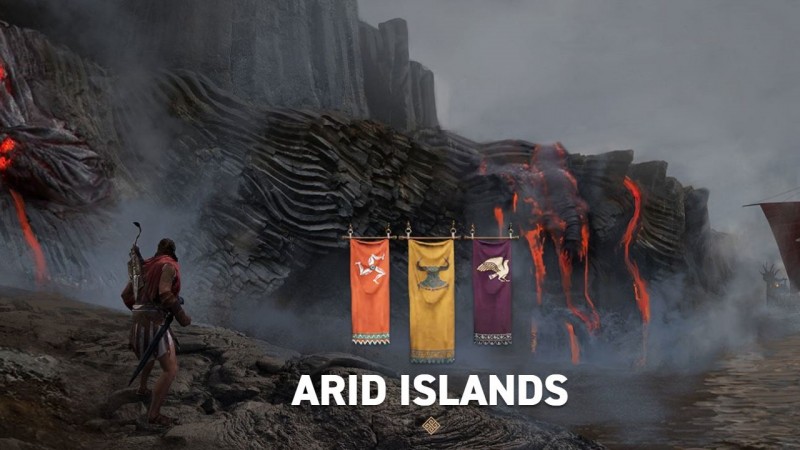 While walking through Messara in the Arid Islands, be on watch for giant baby toys, because this is where Assassin’s Creed Odyssey claims the infant Zeus grew up. Taking family issues to new heights, Kronos, Zeus’ father, swallowed every one of his children as soon as they were born. The baby Zeus was spared this fate because his mom switched him with a rock, and the crazed cannibal Kronos ate that instead.

It was too dangerous to keep Zeus around so, Rhea, his mom, sent him off to live on Messara with a bunch of random mortals. Normally leaving your newborn with some strangers armed to the teeth would be frowned upon, but when your husband is a known baby-eater, I guess anything is safe in comparison. Whenever the infant god would cry, warriors would dance and strike their shields to cover up the sound, that way Kronos wouldn’t figure out he’d been duped. Somehow this didn’t make the baby cry even louder.

When Zeus grew up, he challenged his father and rescued his brothers and sisters that were now fully-grown adults presumably just hanging around in their dad’s stomach. Zeus became king and the rule of the Olympian gods began. One of the higher-level areas in the game, Messara offers a great mythical late-game quest when you’re done exploring “Zeus’s playground.”

Assassin’s Creed Odyssey is coming out October 5, on PlayStation 4, Xbox One, Nintendo Switch, and PC. Game Informer has played through some of the game, if you are interested in seeing the world for yourself and we dive into what we love (and something we don't) here. Also, our Assassin's Creed Odyssey review went up this week, be sure to check it out.