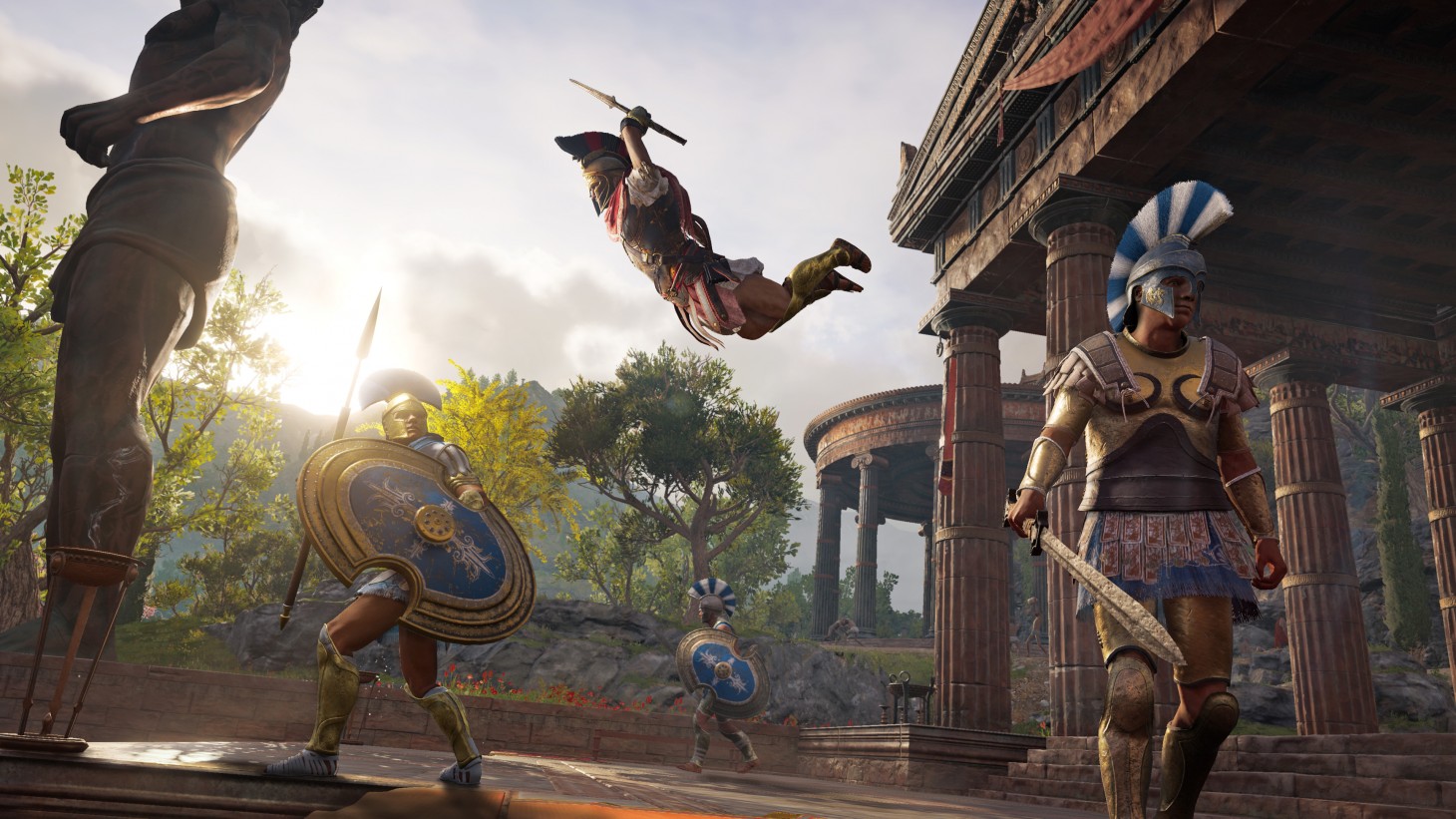 Five Ways To Spend Your Time In Assassin’s Creed Odyssey

The Assassin’s Creed series is famous for its rich worlds with various activities to pursue. Assassin’s Creed Odyssey is continuing that tradition, but the team at Ubisoft Quebec is also expanding on it by layering in a variety of new, interconnected systems. The story of Alexios or Kassandra searching for their family is still the central pillar of Odyssey, but the content supporting that arc has grown more intricate and interesting.

This is one of the major ways Odyssey is evolving beyond the previous installment, since Origins relied primarily on basic sidequests to get players to the recommended level for the next story mission. In Odyssey, you spend your time with a broader and more varied array of tasks. These are the diversions that grab your attention and entice you to stray from the critical path with promises of treasure, allies, and more.

Odyssey is set during the time of the Peloponnesian War, which means that Athens and Sparta are constantly fighting for control over many nation-states. Your intervention can change the tides of an individual conflict, but it won’t win the war. That isn’t the kind of progress you’re making here. Instead, you’re working for the rewards you get along the way as you’re flipping or defending a nation-state. “The world is a moving chessboard, with 28 city-states,” says creative director Jonathan Dumont. “Some are owned by Athens, some are owned by Sparta. We wanted you to be able to pick a side at any point, since you’re a mercenary in the game.”

You don’t have any particular loyalty to Athens or Sparta, so which side you choose is purely practical. You can look at the potential rewards for siding with one power or another, and then work toward the outcome you prefer. That’s a multi-step process, not just a single mission. “Each nation, their resources, their power, their ability to wage war is shown to the player represented as a nation power gauge,” Phillips says. “The player will have in-game actions that they can perform that will weaken the state – killing soldiers, destroying their war supplies, stealing their national treasure and then ultimately killing their leader, which will make them the most vulnerable.”

Once you are victorious and your reward is in the bank, the nation-state will eventually fall into jeopardy again and you can continue the cycle. Except maybe that next time, the other side has a more tempting offer. 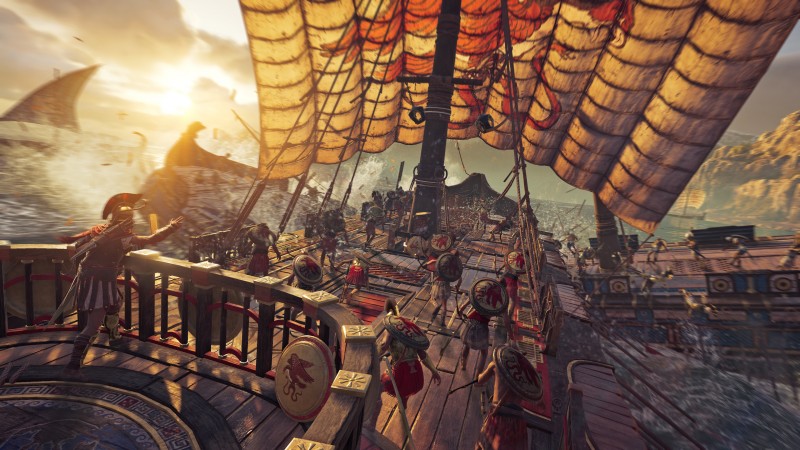 Your ship is more than a means of transportation. It’s your base of operations, and a formidable weapon. The vessel’s baseline power levels up with you automatically, so you won’t be outgunned in regular encounters if you don’t want to fuss over upkeep. On the other hand, for players that enjoy the naval element, you can invest additional time and resources to upgrade your ship’s hull and weapons to become a greater threat.

Another way to improve your ship is through passive boosts you get from characters you recruit. These can be drawn from multiple categories, including friends you help, mercenaries you defeat, or even regular soldiers on patrol. “They have bonuses for you ship,” Dumont says. “These are called our lieutenants, and you can have four that are active at the same time on your ship, but you can have a roster and collect them like Pokémon.”

The naval elements don’t appeal to every player, so diving deep on these features isn’t a requirement. But it offers a satisfying way to tie various activities together for those who are interested. “It makes it feel like there’s a connection between the land and the sea, which was always we knew could be a challenge,” Phillips says.

Though technically part of the war effort, contracts are quests that run in the background. They usually involve targeting particular groups or units, like killing a set number of Athenian soldiers, or Berserker Spartans. “These are long-term quests,” Phillips says. “These are things you’re going to pick up from the message board. Some you might complete within 30 minutes, and some you might not complete for five hours.”

Contracts are put out through war leaders, so your success ultimately contributes to strengthening or weakening your chosen side in a conflict. But message boards also allow you to pick up a more neutral quest: Bounties. Just like when other mercenaries come hunting for you when you step out of line, you can bring justice to people who break the law. Bounties might even set you against other mercenaries, posted by people who want to get revenge. While these may be more straightforward quests, they can have some narrative significance. “They’re real stories that we retouched so it fits our game, but a lot of these things are part of the research we’ve done," Dumont says. 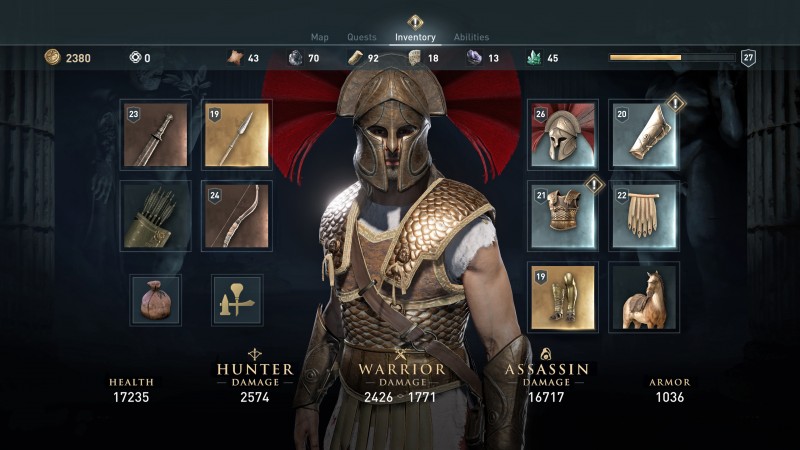 The cycle of collecting loot to help you defeat stronger foes and get even better loot is a staple of the RPG genre. This was one of the things propelling you forward in Assassin’s Creed Origins, but the concept has been expanded even more in Odyssey.

One sign that your gear is even more important is that your armor now occupies specific body slots: head, chest, waist, arms, and legs. What you’re wearing isn’t just cosmetic like in Origins; five armor slots mean you have five opportunities to improve your stats and create stacking bonuses. But you also aren’t stuck with your equipment’s innate properties, since you can engrave items with a special bonus, like improved defense, or boosts to certain kinds of damage.

“Engraving is good for enhancing what you want to focus on or making up for areas where you’re weak,” Phillips says. “If your armor is really low because you’re an assassin player, and you’re wearing more cloth gear, you’re not going to be wearing the super helmeted stuff, you’re going to be weaker in fight, so maybe you want to engrave things that are going to make you a little more balanced in that way.”

As you progress, you can expect a steady stream of new gear to replace your old stuff. While that is usually a good idea, the team at Ubisoft Quebec isn’t forcing you to leave your favorite pieces behind. Like Origins, you have the option to bring a lower-level piece of equipment up to your current level. This process costs obsidian, so you won’t be upgrading every piece of equipment this way, but if you have a weapon that you love with just the right enhancements for your playstyle, you can keep it relevant until something better comes along.

The mercenary system allows you to fight challenging enemies and reap rare rewards. Plus, it lets you recruit powerful lieutenants to accompany you on your journey. Imagine the Phylakes from Origins crossed with a hint of Shadow of Mordor’s nemesis system. If that combination sounds fun to you, read more about it with our in-depth feature about how mercenaries work.

Not every part of your progression is new or reimagined. Fans of previous games can expect plenty of the activities that have helped define the series through the years; all of the stuff you’re accustomed to doing in Assassin’s Creed still feeds into your progress. “You assassinate, you complete points of interests,” Phillips says. “So forts, camps, tombs, ruins, sunken shipwrecks, and things like that will give you XP.” Some of these might contain threads that lead you toward other optional quests, or send you to areas of the map that you may not have explored otherwise.

That isn’t a comprehensive list of everything you can do in Assassin’s Creed Odyssey; these are just the primary loops that tie into your progression. While it may seem straightforward, the intricacy of these systems becomes apparent when you see how they all interact. To get a sense for how the elements can affect each other, take a look at this arrow-filled diagram from Ubisoft: 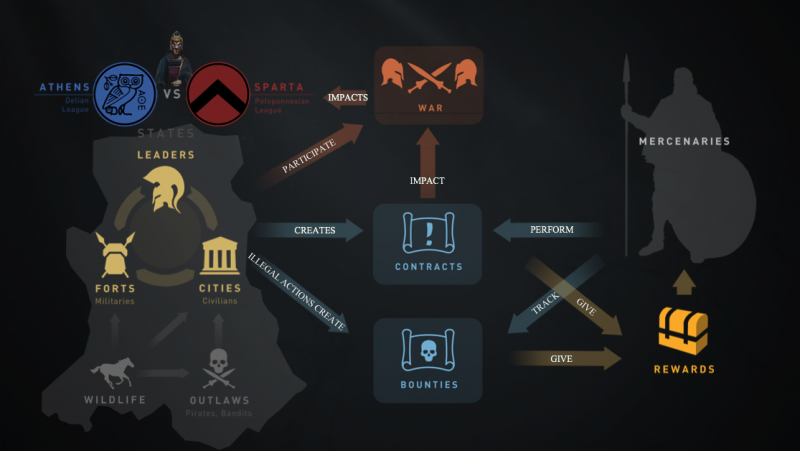 Players may not always think of their exploits in terms of a flow chart, but the image showcases the borderline-ridiculous degree to which a single act can have consequences in other areas of the world’s gameplay ecosystem. Don’t be overwhelmed, though; the goal isn’t to drown players in mandatory busywork. Instead, the team wants to provide different activities (and worthwhile rewards) to ensure that players can engage with the things that interest them.

“We don’t want you to just blow through the main story,” Phillips says. “We’ve built this game and the experience that we’ve tried to craft is for you to take time and go off and try other things. That’s the way it should be played.”

Click the image below to visit our coverage hub, where new features about Assassin's Creed Odyssey will be posted throughout the month!