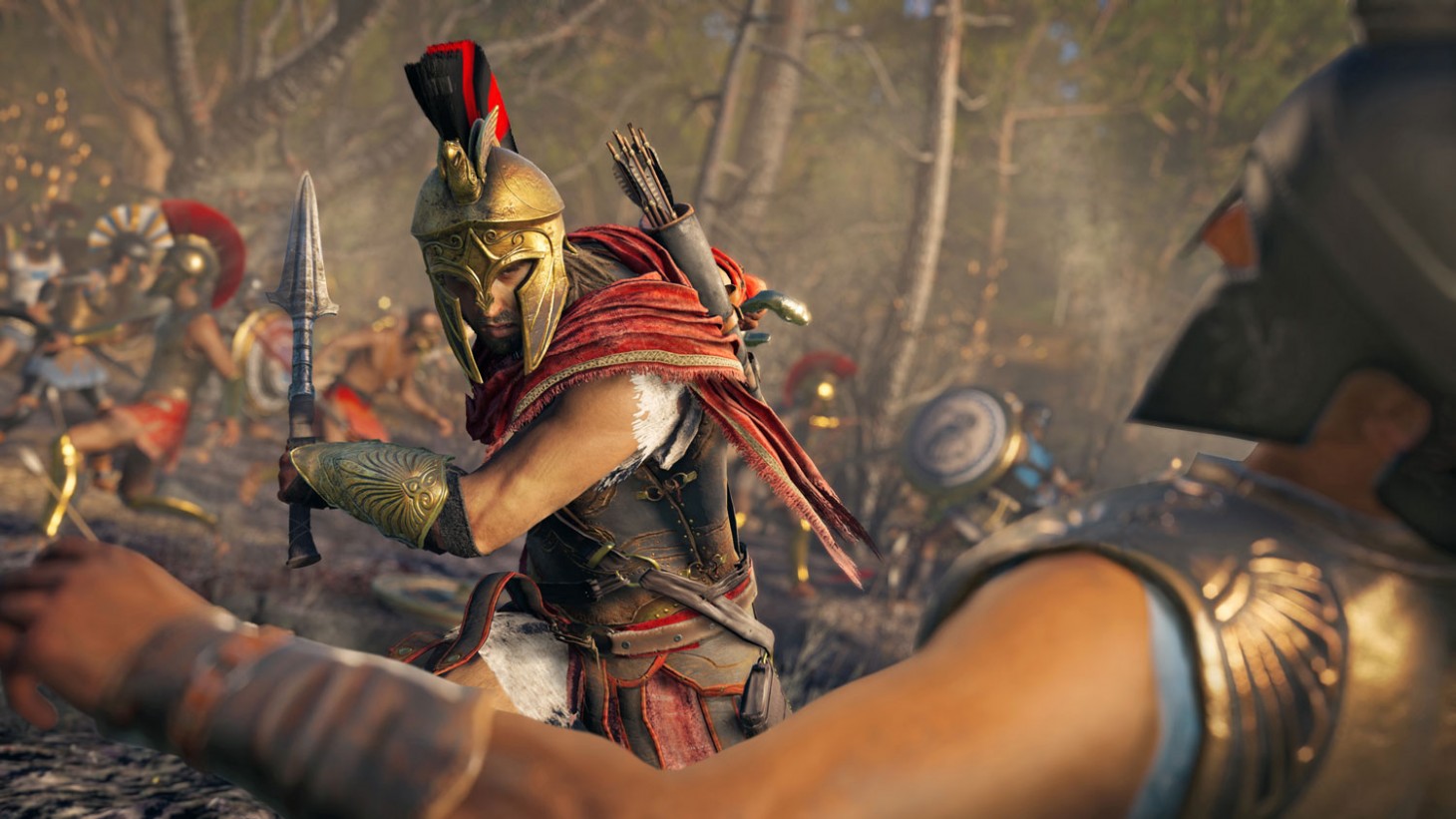 Mercenaries Are The MVPs In Assassin’s Creed Odyssey

You don’t have a creed in Assassin’s Creed Odyssey. It makes sense, considering the game’s setting of Greece circa 431 BC predates the establishment of an organized Assassin brotherhood by several hundred years. In short, you’re not an Assassin, or at least not one like we’ve known throughout the Assassin’s Creed series. Whether you choose Alexios or Kassandra, your official job title is the same: mercenary. As it turns out, you’re far from alone in that field.

In Assassin’s Creed Origins, the player character Bayek was hunted by powerful enemies throughout his journey. Bayek was a threat to the pharaoh Ptolemy, and the ruler sent his private guards, the Phylakes, to track Bayek down and snuff out his life. It was a fun way to add an additional threat layer to the game, and when that signature horn blew, players knew they were in for a tough fight. Once all 10 were killed, Bayek was rewarded with a slick new outfit – and that was it, basically. In Odyssey, Ubisoft Quebec is taking that kernel of an idea and exploding it.

Without a strict code to follow, you’re much freer in the world. You can choose to steal, slaughter livestock, and go on murderous rampages. “Let’s say you’re going around the world and you’re a s---head,” says creative director Jonathan Dumont, “It’s your choice, but there are consequences.” If you commit crimes, a bounty will be placed on your head. And when mercenaries appear to collect, that’s when the real fun begins.” 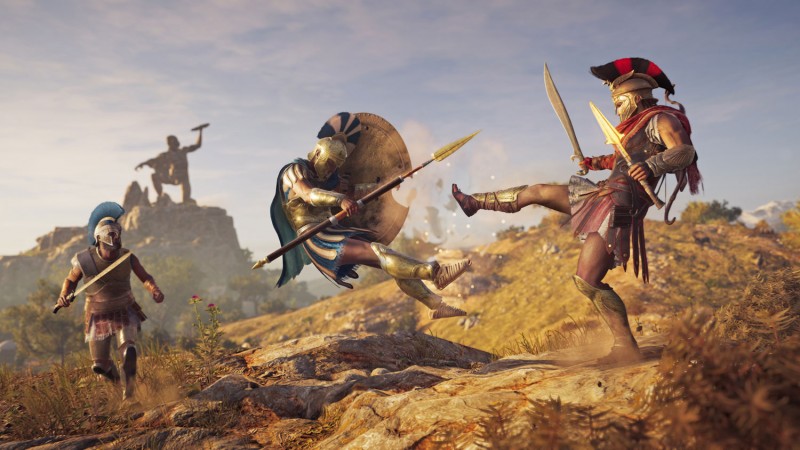 Every player’s game starts with 50 mercenaries, drawn from a pool of hand-crafted characters and others that are randomly generated. They all have their own special abilities, strengths, and weaknesses, as well as gear. “It’s endless Phylakes,” Dumont says. “And some have bears.” They’ll leave you alone if you walk the straight and narrow, but beware if you decide to indulge your criminal fantasies.

Players can accrue an increasing amount of notoriety, which is represented by a one-to-five scale. An easy way to think about it is like the wanted levels in the Grand Theft Auto games. When you’re wanted, the mercenaries will start to look for you. A higher bounty attracts higher-leveled mercenaries, and more of them, so it might make sense to pay your fine to get them off your back. Or, if you’re feeling more confrontational, you can track down the person who issued the bounty and eliminate them – and the bounty, too.

They’re like Origins’ Phylakes, with a little bit of Shadow of War’s Nemesis system thrown in for good measure. The interesting part comes in after you’re done battling them. Once you’ve incapacitated them, you have a couple of options: You can choose to kill them, or you can hire them. “If a mercenary is pursuing me throughout the world, you know what, I want to show respect for that guy and keep him,” Dumont says. “You can do that.” Regardless of whether you choose to kill them or let them live, you get whatever gear they have, which can include special legendary items.

Mercs and other characters you recruit join your ship’s crew. Some of these guys add special abilities for your ship, such as reducing cooldowns for your weapons or increasing your ship’s speed. There’s also a skill, Call to Arms, which allows your character to summon one of your allies into on-foot combat for a while.

Don’t think you can simply massacre your way through all 50 and call it a day. The Mediterranean is a lucrative place to be, and more mercs will arrive to take the place of the fallen. As you eliminate the competition – by recruiting or killing them – you’ll work your way up the rankings. Each ranking tier has special benefits, such as getting discounts at vendors and smiths. 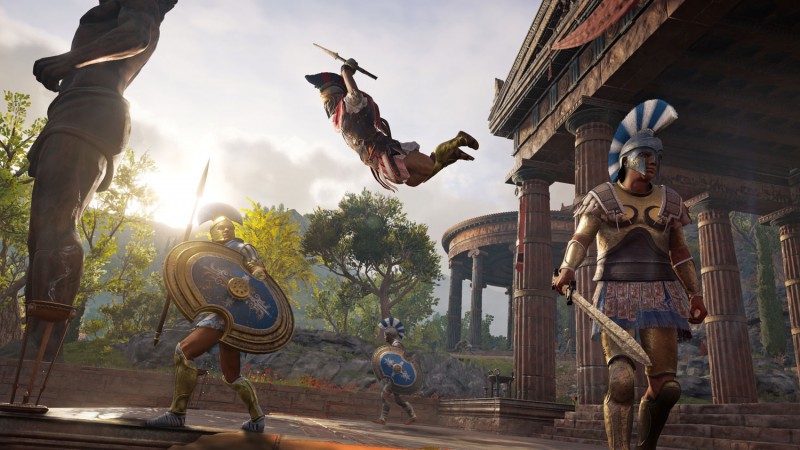 Bounties will also slowly reduce over time if you stop committing crimes, but you’ll be hunted as long as you have one. And as long as you do, it pays to be vigilant. “Let’s say you have a three star bounty and you go into the world and you go into a big fort and you start messing around,” says game director Scott Phillips. “Then they sound the alarm. Who’s coming? The bounty hunters. All those guys know where you’re at. They’re seeking you. They don’t come straight for you, they come in the area you’re at, but in this case when the alarm rings you see them like they’re ring wraiths coming. Oh no! We wanted to create those tension moments. When you have a five-star bounty, which takes a long time to store up, it’s something.” They’ll follow you out to sea, too, so don’t think you can easily hop on your boat and sail away from your problems.

The mercenaries seem like a great addition to the series, adding a much-needed layer of variety. If you get tired of questing, you can decide to pursue mercenaries and level up that way. Or you can chase after them simply because you want to enhance your ship’s crew or get better gear. You’ll see them in the world, too, even if you haven’t riled up the locals, so you can opt for a confrontation on the fly. That doesn’t mean you have to cause trouble if you want to engage in mercenary combat, though.

Role-playing is a big component of Odyssey, but don’t think you’ll be missing out on the mercenary elements if you decide to play as a law-abiding citizen. Mercs hang around arenas, and you can rise through the ranks in officially sanctioned battles, too – no murdering, stealing, or slaughtering required.

Assassin’s Creed Odyssey is coming to PlayStation 4, Xbox One, and PC on October 5.