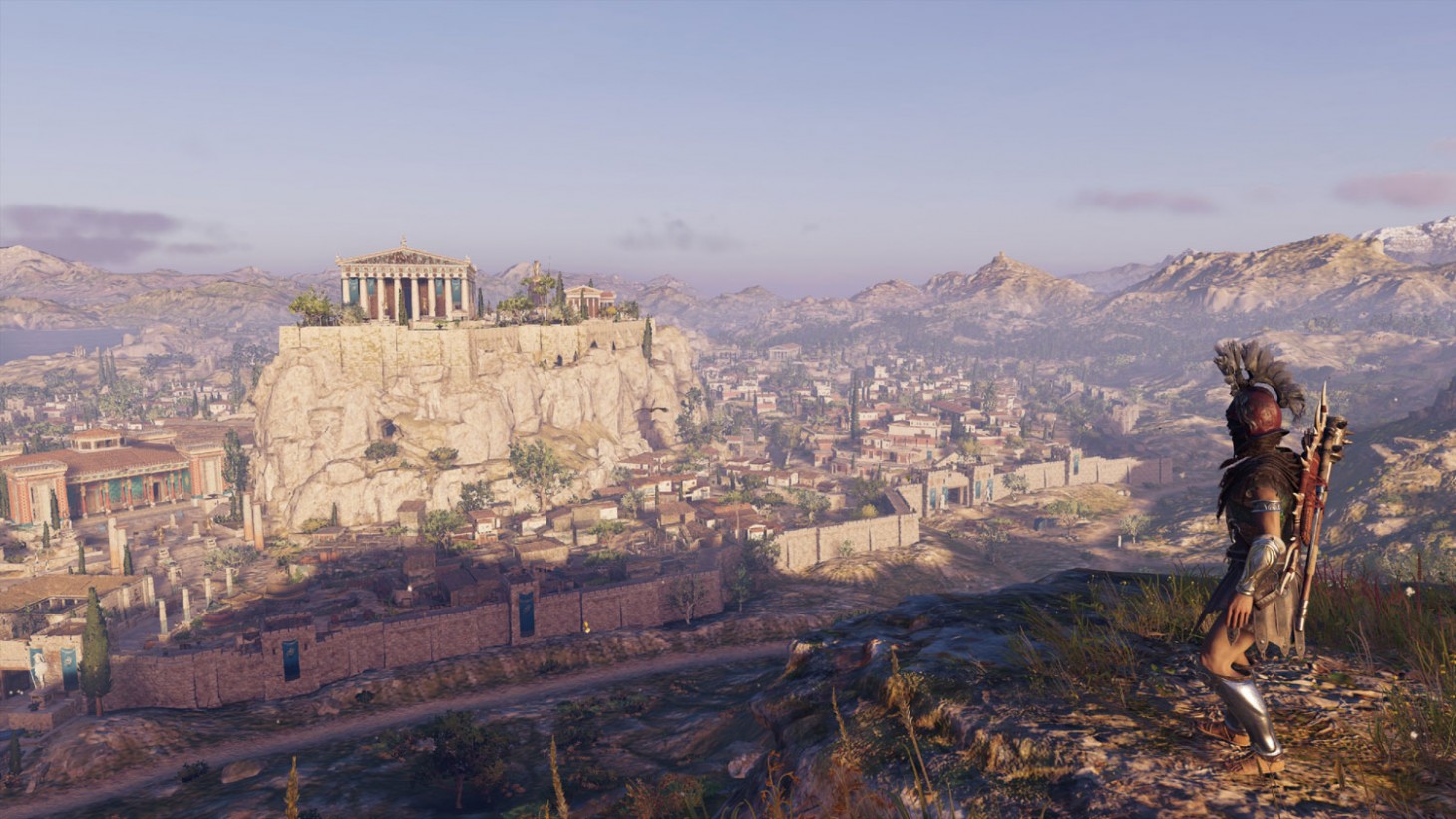 Assassin’s Creed Odyssey is easily the biggest adventure the series has seen so far, with a land mass that’s almost overwhelming in scale and a steady deluge of activities to occupy your time. With so much to see and do, it’s easy to lose track of some of the smaller details that make the game so much fun to play. Ubisoft Quebec may not have invented all of these quality-of-life options and interesting details on their own, but we’re no less appreciative of the fact that they’ve been included. Here are some of the things that you can look forward to when the game comes out this week – and one thing we hope the studio can fix.

You’re going to pick up a lot of stuff during your time in Assassin’s Creed Odyssey, and fortunately the game’s developers made the process of filling your pockets as easy as possible. Your hero is essentially an ancient Greek vacuum, able to pick up the goods from a pile of dead bandits, slain animals – whatever – at the single press of a button. In other words, you don’t have to walk over to each corpse and hold down a button to go through their pockets individually. Instead, you’re able to add everything to your inventory in one quick movement. Implausible? Sure. Appreciated? Absolutely. Similarly, there are piles of floating debris that you can grab while you’re sailing – and you don’t have to get particularly close to do so. If it seems too unrealistic, blame/thank the first civilization. That’s what the franchise does, anyway. 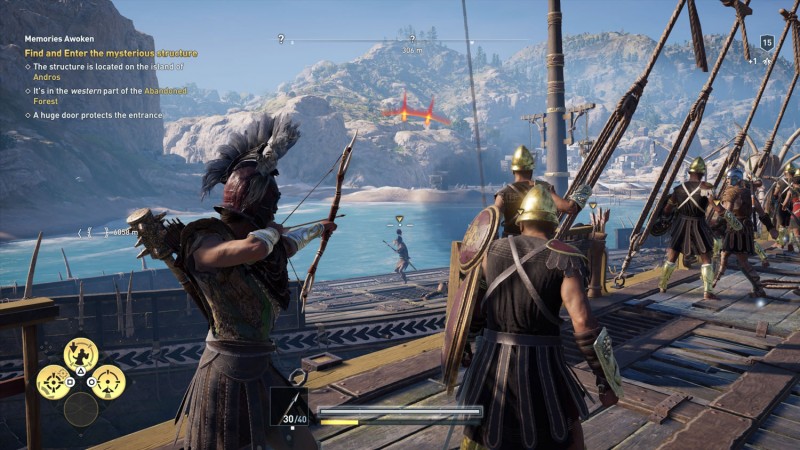 2. Your own cheering section

Naval combat isn’t the most gripping element in the game, but it’s something you’ll end up doing from time to time. After you whittle a rival ship’s health down, you’re given the option of boarding it (for the chance of getting more character-focused items like gear and weapons) or sinking it for raw materials. The thing is, even if you select the boarding option, you don’t need to jump onto their deck and slaughter the crew to reap the rewards. Instead, you can use your bow from the comfort of your own vessel and take care of it that way. Best of all, your crew will cheer uproariously every time one of your arrows cuts an enemy down. It’s good to be the captain.

When you hit level 20, your character doesn’t take fall damage anymore. Instead, you do a little rolling somersault and keep on moving. Even before you hit that milestone, significant falls will injure you but they won’t deliver fatal damage. If you’re like me, and run around the world like an absolute maniac, this is a literal life-saver. “I’m glad that I died by falling off that cliff, it really added a lot to my immersion and overall gameplay experience,” said nobody ever. Also, if your horse falls off a cliff and “dies,” it’s only temporary. 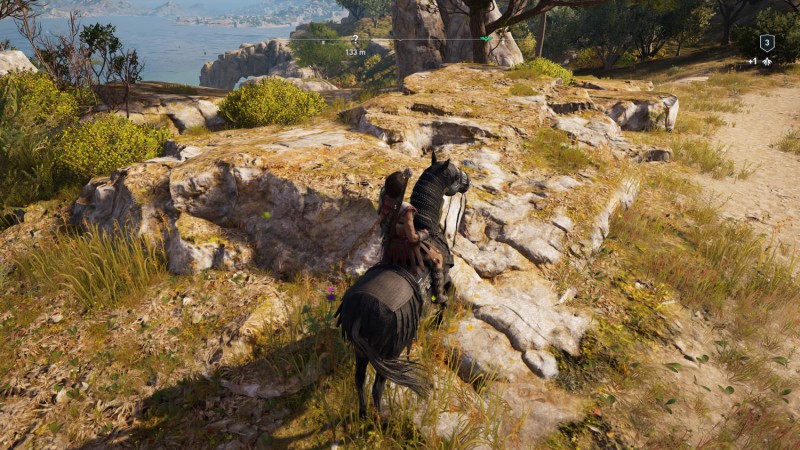 Your horse isn’t explicitly magical, though it is able to materialize in some unbelievable ways with a mere whistle. Again, first civilization. The cool thing is that, if you’re running as you whistle it into being, you can mount it without breaking stride; you jump onto it like you’re some kind of Legolas, only without that dodgy animation.

5. Change comes from within (and it’s super easy)

Odyssey provides a new level of character customization for the series, allowing players to create their own builds from assassin, hunter, and warrior skill trees. You’re only able to map a few of these skills to your face buttons, and chances are you’ll invest early into skills that don’t suit your playstyle. Fortunately, you’re not locked into any of your decisions. You can respec your character at will, after paying a trivial amount of gold (which you’ll be earning plenty of through normal play). It also eliminates the finder’s remorse that can come when you happen upon an intriguing, high-level piece of gear that doesn’t align with your current build. Does that bow have some cool buffs, but your hunter skills are underdeveloped? Give it a shot. If you don’t like it, you can always go back. 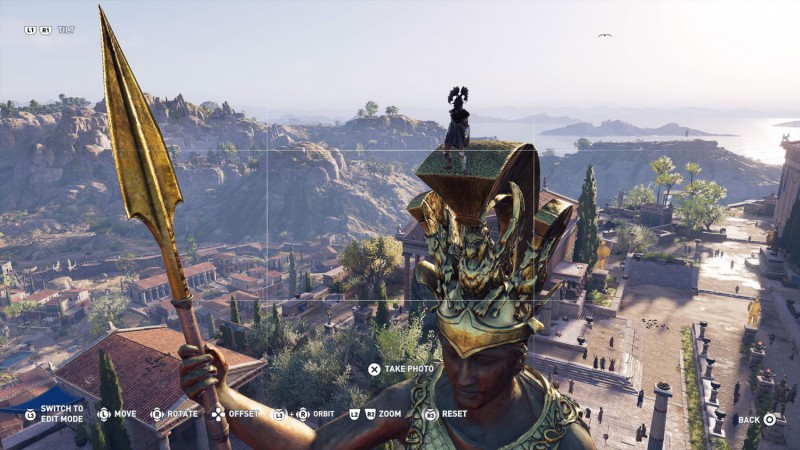 We’ve reached a point where not having a photo mode is more noteworthy than including a way for players to pause, frame, and share memorable moments from their favorite games. Odyssey makes it absurdly easy, mapping the mode’s default activation to hitting L3 and R3 simultaneously. It’s silly, but I found myself snapping more photos because I didn’t have to enter a pause menu to capture the action. I imagine others may share that perspective, which makes the next part as important: You can easily filter out the photo icons that are superimposed over your map to only show your photos, your friends’ photos, all photos, or – if you think the map already has enough icons – none of the above.

Mistakes happen. Sometimes you accidentally murder someone or steal everything from a temple or otherwise attract the attention of Odyssey’s law enforcement, the mercenaries. You can eliminate the person who put the price on your head, but another third option for my fellow lazies: pay off your fine from the map screen. It may not withstand logical scrutiny, but it sure beats having to run over to a bureaucrat and wait in line. This is more about convenience than anything else, since making a habit of paying off level-five bounties will get prohibitively expensive.

8. Icons for other missions in progress

You can take on a ton of different missions in Odyssey, from the campaign to errands for NPCs and jobs from the various mercenary boards. You can only track one mission at a time, but a subtle icon will pop up when you’re near another mission objective marker. In other words, the NPC associated with Fetch Quest B will be highlighted when they’re close even if you’re focusing on Fetch Quest A. It saves a lot of time if you run into a mission-critical person or objective, even if you’re working on something completely unrelated – it certainly beats backtracking. Additionally, you can even complete quests without accepting them; if you unwittingly kill a special target or find a key item, you’ll get a notification on where you can turn in your surprise mission for the reward.

Ubisoft has been pretty quiet about this element of the game, and we’ll respect that secrecy for the time being. Suffice it to say, there are cultists in the world of Assassin’s Creed Odyssey, and you have to take them down. As you do so, you earn specific pieces of set gear; eliminate a particular sect, and you complete the item set. The various people in each sect have different recommended levels, so there’s a good possibility that the set gear will be a patchwork of various levels when it’s completed. No worries! Once you take out the leader, everything within that set automatically gets boosted to the level of its leader, saving you a bunch of resources by not having to pay a blacksmith for upgrades. Trust us – it’ll make more sense when you see it in action, and you’ll be thankful once you do.

10. Yes, we all climbed up that groin

When you start Odyssey, there’s a prominent landmark that happens to be a statue of a naked god. You’re probably going to climb up it and think you’re the most clever person in the world. No fewer than four members (no pun intended) of the GI staff did, and we were treated to a special piece of dialogue. Well played, Ubisoft Quebec.

Not everything is rosy, however. There’s one thing we hope that Ubisoft Quebec will address in a post-release update. 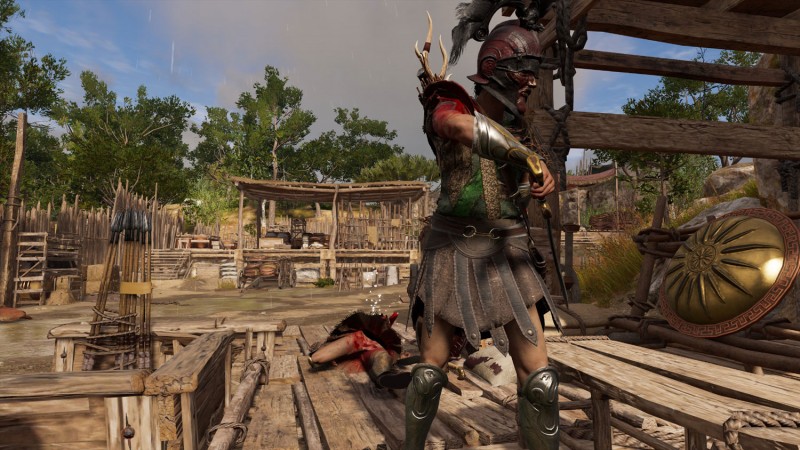 1. Put on some damned pants already!

Yeah yeah, we know that the Assassin’s Creed series prides itself on historical authenticity (more or less), but Odyssey’s dress code will make unwitting creeps out of us all. It’s all one, big upskirt! Whether you’re swimming, climbing up a ladder, riding a horse, or slaying your enemies (who also have the same problems, see above image), odds are you’re going to be seeing your characters’ granny (or grampy) panties in full force. Please let us unlock some leggings or tights – we’d even settle for fur pants. Or, at a minimum, let us dye our tighty whities to be something less flashy. Please. Please. 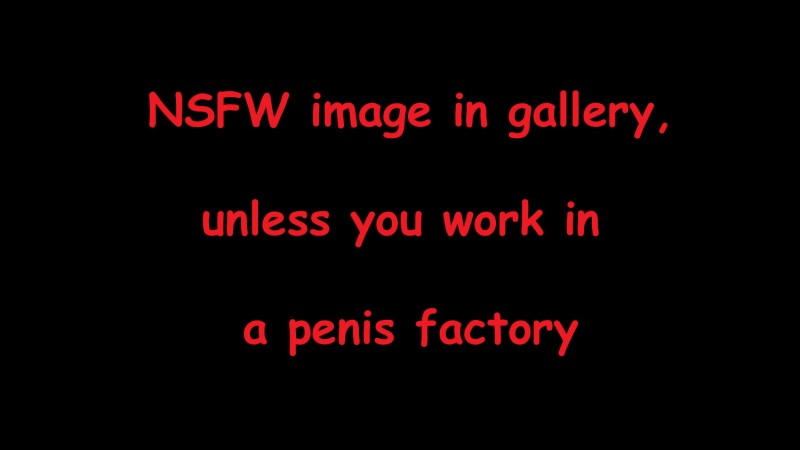 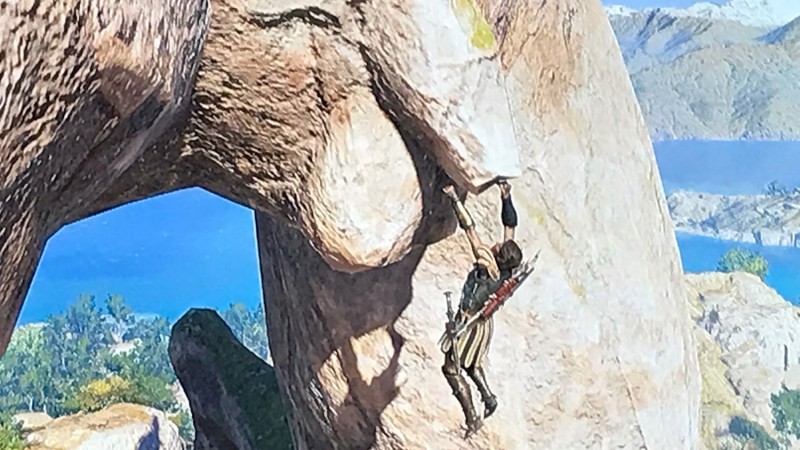