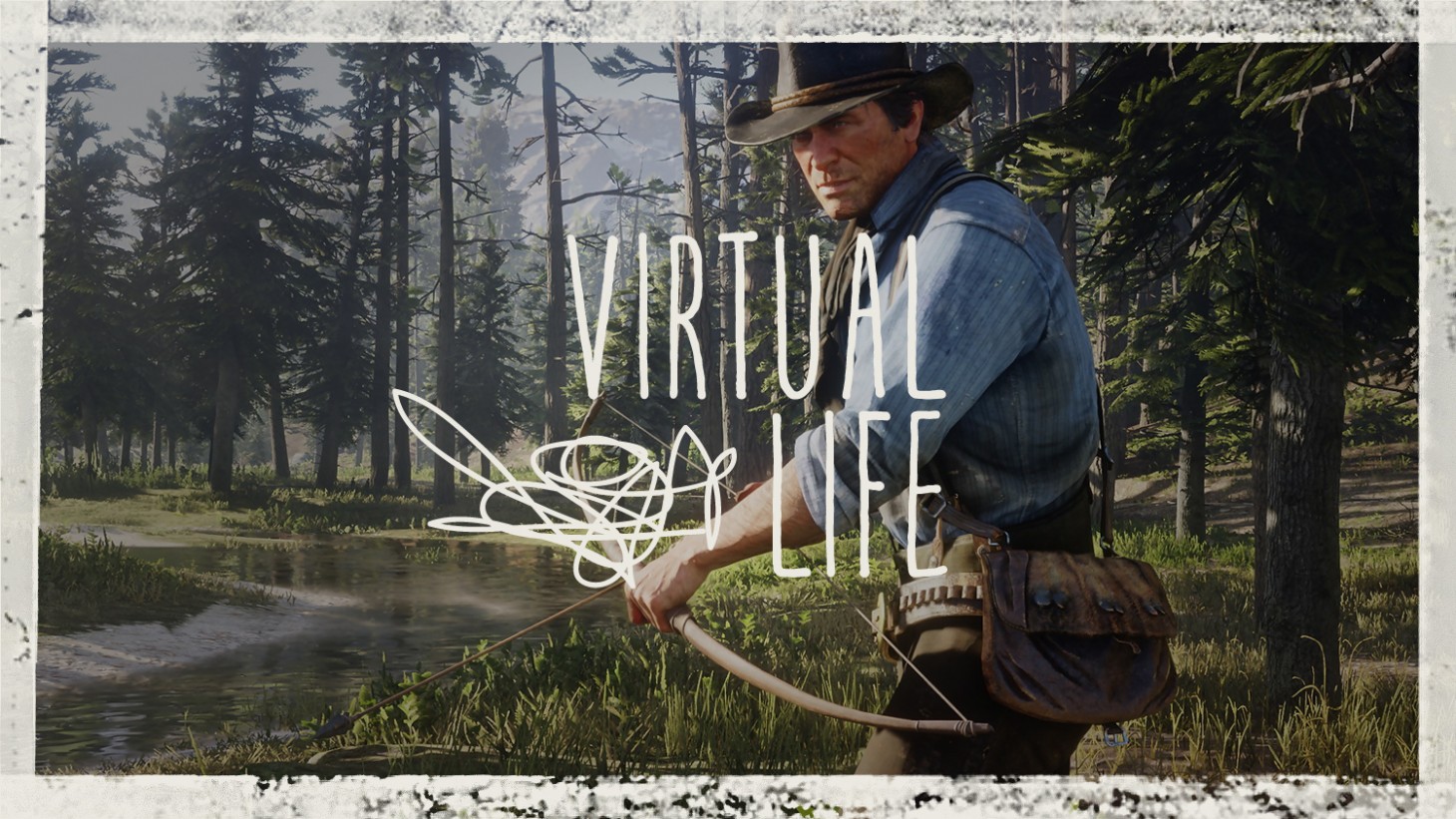 Arthur Morgan Is A Better Protagonist Than John Marston

A few weeks ago, I dedicated a fair amount of words to talking about why the original Red Dead Redemption’s protagonist John Marston is, to put it plainly, so damn good. Since then I finally got the chance to sink my teeth into Red Dead Redemption II, dedicating five days to playing through the massive story. While RDR II is already shaping up to be a divisive game due to its abundance of systems, realism quirks, and bleak tone, I count myself among those floored by the game’s achievements. It’s simply the best game I’ve played since Mass Effect 2, my favorite game of all time, and with Game Of The Year discussions looming in the months to come, I’m sure I’ll have several opportunities to make the case for Red Dead Redemption II’s virtues.

For many people, myself included, John Marston is Red Dead Redemption. The sights are beautiful, yes, and the gunslinging frantic and appropriately bloody. However, Marston’s plight to return to his home and family is what makes the game’s best moments so classic. Riding into Mexico for the first time as Jose Gonzalez’s “So Far Away” plays is so powerful because you feel the weight of John’s troubles ever so slightly lift off his shoulders as he rides into the majesty of a new land. Likewise the emotional power of his victory lap ride to Abigail and Jack, through snow and desert and forest, is well-earned. The earnestness of his love for his family as well as voice actor Rob Wiethoff’s vocal balance of gruff yet humble keeps us grounded in John’s quest to the point that it makes forgiving some of the doldrum errand bits in the Mexico segment easy.

However, all of his virtues in mind, there’s one criticism that can be applied to John’s character: he doesn’t experience growth. Marston’s a very traditional hero, literally Odysseus The Cowboy. That isn’t necessarily a bad thing. Part of his charm is his fidelity to his family, but if you strip away Wiethoff’s performance and the great dialogue, there’s not a lot going on there as far as character development goes. Arthur Morgan, on the other hand, is a different story. 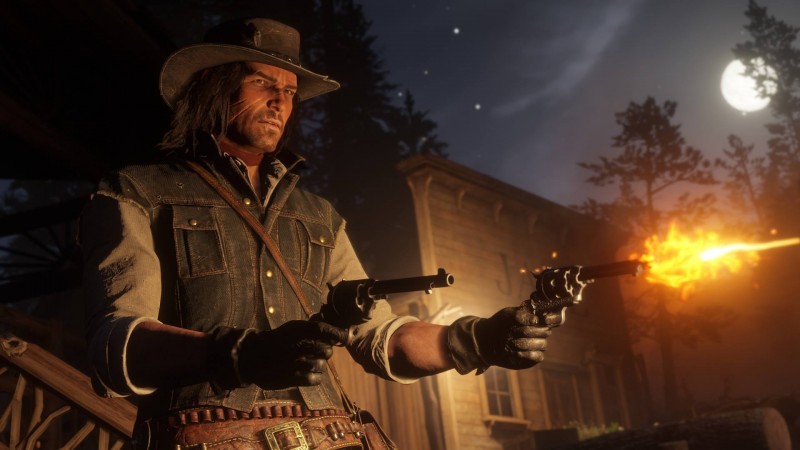 Red Dead Redemption II takes a lot of creative risks. Chief among them is following up a character who is immediately likeable and charismatic (in his own homegrown way) with someone…who is not those things. Let’s be real: Arthur Morgan isn’t someone most people are going to take to immediately. I didn’t. The opening hours of RDR II paint Morgan as a debt collector, a thug, the guy in any other game you’d kill in a brief boss fight before taking on the head honcho. He also isn’t that well spoken and seems too fond of bullying the people in Dutch’s group, Pearson the cook in particular, whose greatest crime seems to be that he loves talking about his military days too much.

So much of RDR II’s intro relies on the immersion of its world to draw you in because Arthur isn’t that compelling out of the gate. As the game teaches you its many many many systems, our protagonist’s personality remains dormant and seemingly simple. At least, until he takes Marston’s son Jack out fishing and meets Pinkerton agents Ross and Milton. This short excursion has stood out to fans mostly for a callback/forward to the end of the original game, where adult Jack meets an older Ross and guns him down as revenge for his father. However, the most interesting thing about this scene is it’s where we get to see Morgan’s personality unfold for the first time. He reacts to Jack’s inquisitive nature in a surprisingly father-like way, joking with him and shielding him from the cruel realities of life, such as when the boy asks what happened to one of the gang members who died right before the gang’s trek into the mountains. Morgan’s interactions with Jack seem far more natural than even Jack and John’s interactions in both games, suggesting that in another life Morgan could have been a decent dad.

As Red Dead II goes on, more of these occasions arise where Morgan’s personality is slowly drawn out from the gruff façade of a personality he presents, one that’s emerged out of his sense of duty to Dutch van der Linde. We find out that Morgan was once in love with a woman named Mary but his life as an outlaw and her family’s prejudice caused their romance to fall apart. Through the horse-caring systems, we experience Arthur’s bond and respect for his horses, culminating in a heartbreaking scene at the end of the game where Morgan spends precious seconds risking life and limb to thank his dying horse for its service. 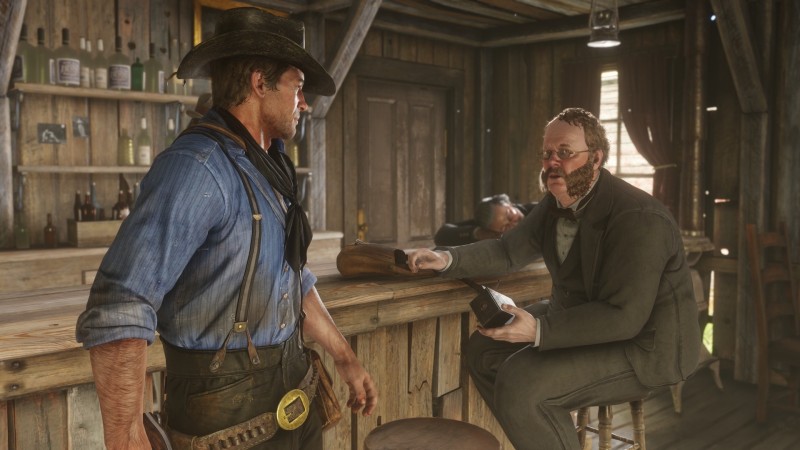 Over at Waypoint, Patrick Klepek expressed criticism of the ludonarrative dissonance variety, drawing attention to how the Arthur he plays in-game (kind, sympathetic) is often at odds with the violent killing machine Morgan seen in cutscenes and missions. I think Klepek’s point is fair criticism in that I can see how that clash could bother a player. However, it doesn’t disturb me or pull me out of Morgan's mindset or the world simply because I think part of the entire ethos of Red Dead Redemption is rooted in the idea that people are complicated and thus lead complicated lives, especially when it comes to the interplay between myth and reality, between the person of the present and who they were in the past. Marston spends the entire story of the original game trying to either outrun his past or literally kill it. Morgan’s journey has thematic similarities, mostly confronting the past and the present in order to define the future, but it veers sharply into unexpected territory halfway through the story.

As Dutch van der Line’s sanity falls apart during the course of Red Dead Redemption II, with members of the gang dying left and right, we get a clearer view into who Arthur Morgan is and help decide who he will be.  Morgan is eventually diagnosed with tuberculosis. The game goes out of its way several times to telegraph that there is no saving him, no Wolfenstein-like moment of salvation hidden in a miracle cure or organ transplant. Morgan himself knows it better than anyone, as he reveals to tribal chief Rain Falls as they search a mountain for herbs that could ease Morgan’s suffering. At several points, Morgan suggests maybe seeking out a sanatorium somewhere West where could be treated, but the delivery of such lines shows that he knows such hopes are fantasy and that his life is ticking down rapidly to its conclusion. 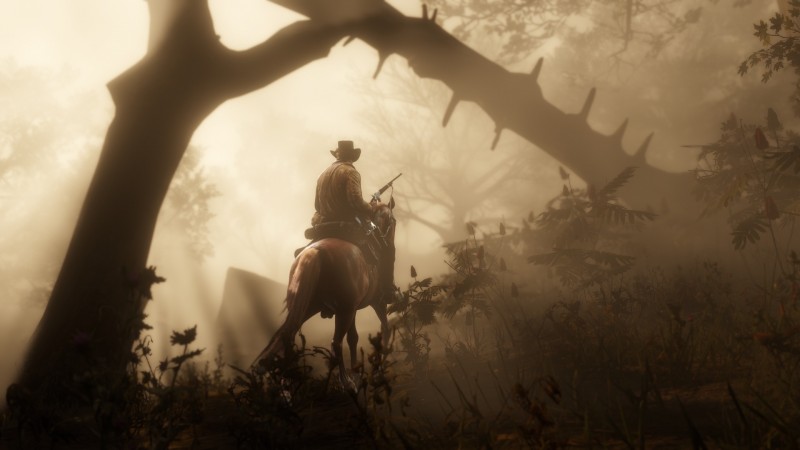 During medieval times, The West was obsessed with death, particularly the idea of “dying well,” to the point that there are instruction texts in latin called ars moriendi that instructed family members on how to bury and pray for the dying. The obsession with death was rooted in spiritual anxiety, particularly the notion that everything you did on Earth was transient and that your soul and the weight of its actions during your life was far more important than any material wealth you had obtained because it would determine your afterlife as well as your impressions left upon the world. This concept is called memento mori (“Remember you will die”) and the theme pops up everywhere in literature, particularly redemption arcs in everything from The Fisher King to Star Wars and Avatar: The Last Airbender. The chief reason I love Arthur’s arc so much is because it’s a fantastic take on memento mori and how ruthlessly messy and complex redemption can be.

Can Morgan be redeemed? He’s done some pretty awful things – robbery, assault, murder by the piles – and Red Dead Redemption II isn’t interested in making things nice and tidy for our anti-hero when it comes to returning to the light. Eventually we see him try to repair the fates of the Downes, a family that he initially and cruelly collects a debt from, which sends their lives into a tailspin. He gives them enough money to start a new life somewhere else. When the matriarch of the family tells him she won't forgive him, he says he's not looking for forgiveness, pointing to a genuine, selfless desire to be a better person. In spite of all the things he's done, Morgan is surprisingly sympathetic. It’s easy to forget, because most of it is referenced in passing conversation, that he was taken in by Dutch at a young age as an orphan. So much of what Morgan does is rooted in pleasing Dutch because Morgan sees Dutch as a father, which allowed Dutch to groom him into his henchman. It’s only in the face of death and mounting evidence that Dutch will betray the gang that Morgan rebels against his abusive father and decides to be his own man in the last precious hours of his life.

What’s interesting is the player gets to choose what form Morgan being his own man takes. Does Morgan pursue the cash that might help him find a cure out west for his tuberculosis (spoiler: it won’t) or at least live like a king in his last few moments or does he abandon it, choosing to sacrifice himself to help Marston escape and return to his family? Either choice is a valid interpretation of redemption for Morgan if you’re so inclined. While choosing the cash over helping Marston is selfish, it’s still an act of rebellion against his backstabbing adoptive father, and a sign that in spite of the tragedy that Morgan has brought on himself and others (as well as the tragedy the world’s brought on him), he is capable of pushing against Dutch’s rule and abuse.

Make no mistake, Red Dead Redemption II is a messy story where character arcs and narrative paths often end abruptly or in unexpected fashion – and that’s part of why I love it so much. When the game reveals you are playing Marston in the epilogue and post-game world I was delighted, no doubt. However, as my hours in Red Dead Redemption II continue to pile on while I explore the west in search of bounties and hunting down both legendary animals and incredible vistas, my mind keeps drifting back to Arthur Morgan and what he lived and died for.

For more on Red Dead Redemption II, check out our review of the game here and our list of 10 quality of life changes we'd love to see.