Persona 5 Royal is an expanded re-release of the original version from 2017, and one element  (among many) getting a stylish reinvention is the opening title sequence. The all-new animation is accompanied by a catchy song, and you can experience it all in the video above.

The release of the footage coincides with Tokyo Game Show, where Atlus has Persona 5 Royal (or rather "Persona 5 The Royal" in Japan) on the show floor available to play. We got some hands-on time with the demo, which consists of a brief challenge battle – a new feature available in the Velvet Room. With multiple waves of tough foes with different weaknesses, this encounter seems tailored to show off the importance of the revamped Baton Pass mechanic, which gives you increasing benefits as you pass turns from one party member to another.

While the combat still works great, this particular demo doesn't shed much light on the questions fans are most curious about, like how the story is impacted by the new content. But once the game releases next month in Japan, we should know more.

Persona 5 Royal is slated for a spring 2020 release in North America. For more footage featuring this stylish RPG, you watch the recent overview, or dig into a bunch of trailers featuring the characters. 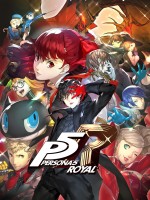