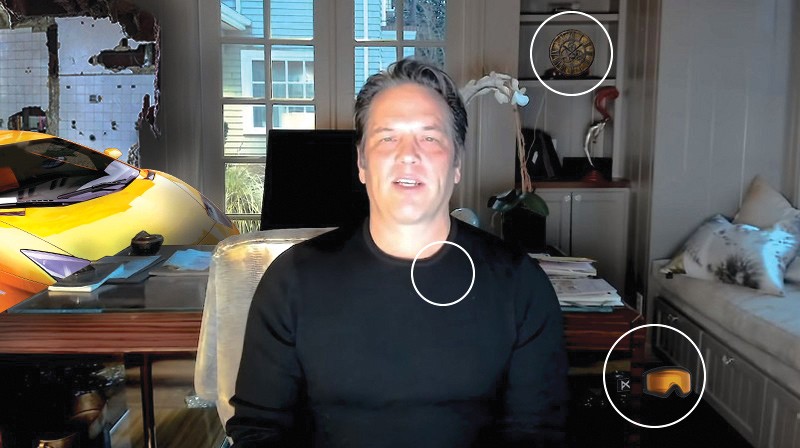 Fans love to speculate about what their favorite studios are working on, and head of Xbox Phil Spencer loves to feed into that unsatisfiable greed. For years, the Microsoft executive has teased upcoming games by hosting press conferences wearing shirts that feature beloved characters. And remember when Spencer tweeted about getting a new fridge more than four years ago? That was clearly a subtle nod to fans about the soon-to-be-popular Xbox fridge meme. Well, Spencer is at it again.

During a Microsoft press conference announcing 17 new games, fans were most eager to dissect Spencer’s home office for clues about unrevealed projects. Viewers were quick to point out that Spencer’s steampunk-inspired clock could be a reference to an upcoming Gears of War title. Others noticed that Spencer’s shirt looked “a bit dorky,” kind of like something a novelist might wear, leading them to speculate that Microsoft will soon revive the beloved Remedy franchise Alan Wake.

However, one of the most interesting elements to Spencer’s office was a pair of ski goggles, which had been suspiciously discarded on the floor. This set Twitter ablaze with speculation that Microsoft is working on a gritty, modern update to SkiFree, the classic skiing game that everyone had on their computers in the ’90s but no one remembers why.

We reached out to Spencer for a comment, asking if there was any merit to this conjecture. The Xbox head responded with, “For the last time, no! Now, please leave me alone. We’re trying to eat dinner.”

Further investigation, however, may have turned up a tease that was previously overlooked. The day after the show, a Reddit user named Sherlock¬_Gnomes hit the nail on the head when they posted a comment that read, “Guys! Look at the car in his room and the giant hole in the wall! His house is in a real state of decay! Get it! They’re working on a new State of Decay game!”