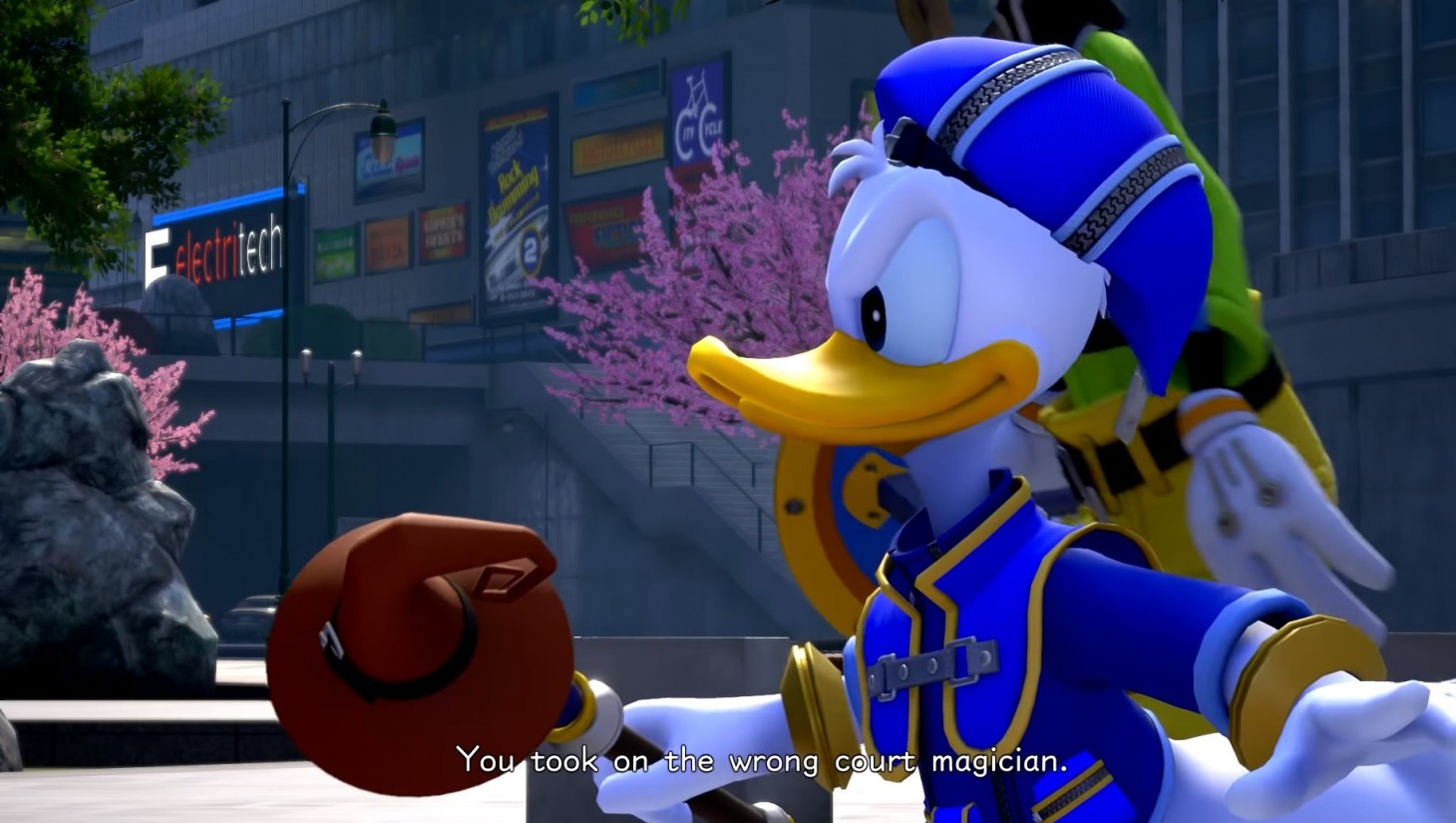 Kingdom Hearts’ convoluted story is a punchline for many gamers who haven’t played the franchise, but fans who’ve stuck around since the beginning have a punchline of their own: Donald Duck.

The series defined clear expectations of Donald from the get-go in 2002. Donald is your team’s mage, and he’s supposed to heal you with a flick of his wizardy wand when you’re too busy blocking enemy attacks to heal yourself, the operative phrase being “supposed to.” I can’t tell you how many times an intense fight ended in failure because Donald decided to go rogue. “Oh look, Donald is unconscious again,” I’d grumble … because it’s inappropriate to swear at one of Disney’s darlings.

Oddly enough, Goofy has never earned the same criticisms – his role has always been the team’s extra muscle, so I don’t fault him as much when he’s slow to throw a potion at me. Goofy is also easy to understand, whereas Donald always sounds like he’s choking on a pack of cigarettes. These few simple reasons explain why Goofy has traditionally been more lovable than Donald.

Kingdom Hearts III offers a satisfying experience for longtime fans, delivering conclusions to decades-long plot points and furnishing the most fluid, magical combat system in the series, but its crowning achievement might be that it redeems a character that many have often found superfluous and annoying. 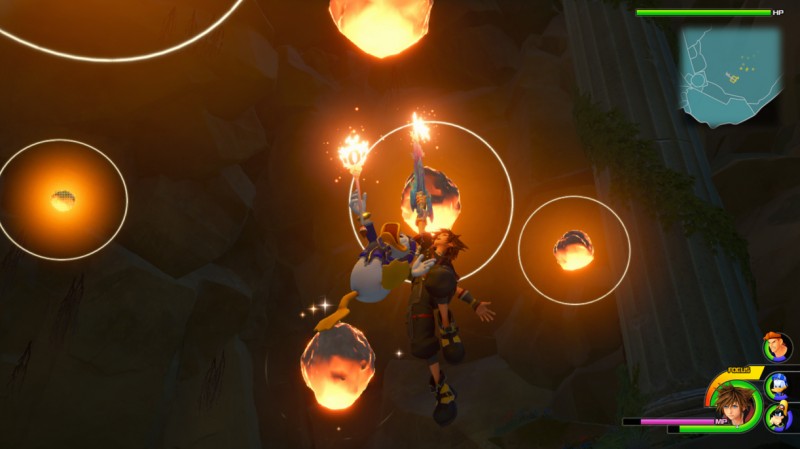 Donald Is Actually Useful On The Battlefield

The combat remains largely the same as it was in previous entries – you can still win most fights by spamming the attack button and performing occasional dodges. But Kingdom Hearts III adds a number of new flourishes that disguise the button-mashing with colorful, bombastic Disney magic. One of these additions is the ability to perform special team-up moves with Donald and Goofy that give the characters renewed utility in combat.

Donald’s moveset includes three flashy attacks: Flare Force unloads a barrage of fireworks at surrounding enemies; Donald Meteor rains destructive boulders upon targeted monsters; and Fusion Fire creates a vortex of flames that drains your opponents’ health to zero. Each of these attacks can devastate enemies, and using them turned the tide for me on more than one occasion. In fact, (and without going into spoiler land), Donald Meteor was the last move I used to fell the final boss, at a moment when my health was critically low.

Watching Donald perform his grand magic made me appreciate his role on the team more than I did in previous games, and it made me forgive those fleeting moments where he couldn’t heal me. 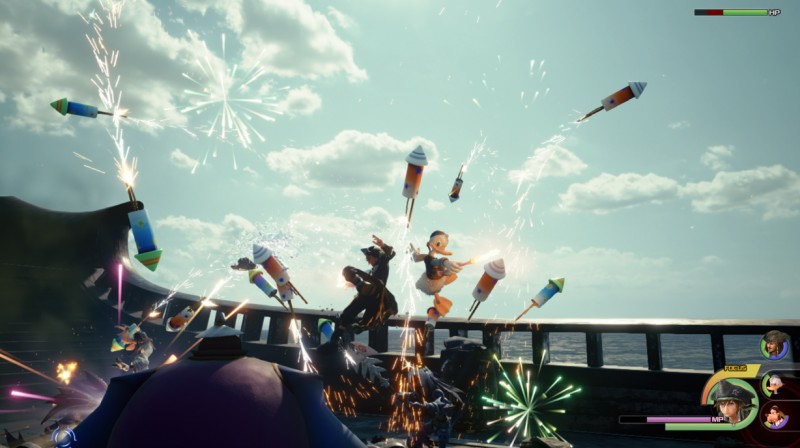 He’ll Help You Find Your Groceries

In a game as littered with collectibles as Kingdom Hearts III, Donald is a godsend. You spend a good chunk of time cooking stat-boosting cuisines with Remy from Ratatouille, but before you start the oven, you have to find hidden ingredients across each of the Disney worlds. These collectibles don’t often stand out against the popsicle-colored locales you visit, making them easy to miss. I was thankful that Donald would periodically announce that ingredients were nearby, otherwise, it’d be easy to miss them. And then I’d have less cuisine.

Similarly, Donald helps you locate easy-to-miss Lucky Emblems throughout the game. This challenge asks players to photograph hidden Mickey Mouse-shaped icons in the environment. Sometimes these take the form of watermarks plastered clearly on the side of objects, but often they’re more devious, asking players to line up objects in the environment. Donald will occasionally alert you to nearby emblems (making me wonder where he was when I painstakingly collected all 101 Dalmatians in the original Kingdom Hearts!).

These are small details, but they do a lot to make Donald more useful from a gameplay perspective. And by extension, I felt more connected to the little fella than I have in previous games. 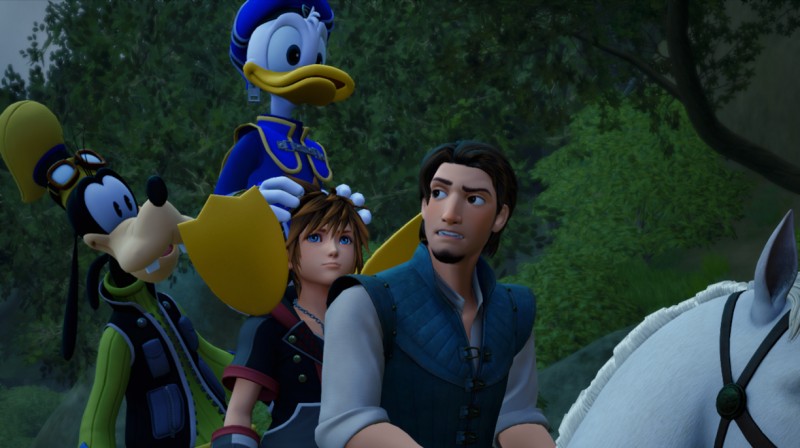 Donald Makes For Some Of Kingdom Hearts III’s Funniest Moments

I didn’t like Donald all that much in previous games, because he seemed one-note, and that note was obnoxious. But in Kingdom Hearts III, Donald offered something I didn’t expect: laugh-out-loud humor.

“Ah! I can’t find my contact!” Mike shouts, to no applause.

“Aren’t you supposed to be good at this?” Donald asks.

Damn, Donald! As much as Kingdom Hearts III is about hearts hopping between bodies and bad guys in black coats dealing with existential crises, it’s also about Donald Duck trying to prove he’s the sassiest waterfowl in the universe. I can’t remember the number of times I laughed at his snappy digs at Sora. 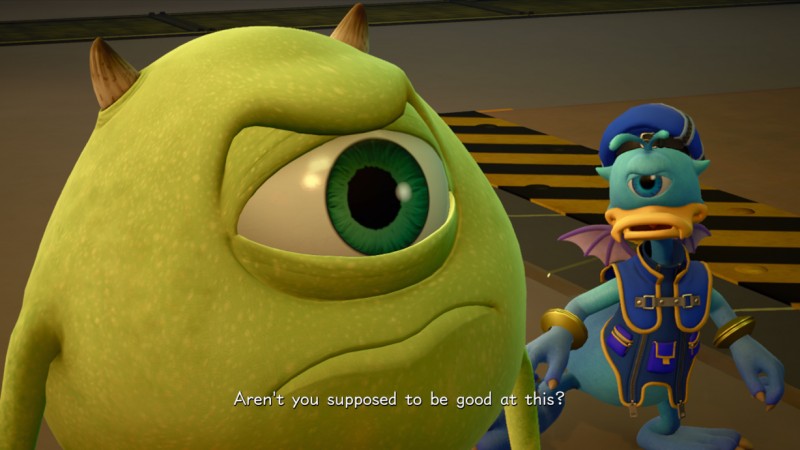 In one memorable scene, Sora and the gang are trying to figure out whose hearts are inside Sora.

“Don’t you know how many hearts you have inside you?” someone asks.

The play-fighting banter between Sora and Donald makes for some hilarious moments in Kingdom Hearts III, but they’re also beautifully juxtaposed by scenes of warmth and true friendship. Again, no spoilers here, but there are many scenes where Donald picks up Sora when he’s feeling low. Those occasions are so relatable – we’ve all had friends help us when we’re down. That’s why these moments with Donald are some of the most emotionally resonant and heartwarming scenes in the game.

Kingdom Hearts III gives us the best characterization of Donald yet. For players who see the Xehanort saga to its conclusion, it is hard to reduce Donald to a joke. Sure, there were still times I wished my companion would just heal me quicker, but those moments are far outweighed by the number of times he helped me make short work of enemies in combat. And find my groceries. And make me laugh.

Check out a six-year-old's impressions of Kingdom Hearts III. If you haven't started playing, we made a handy guide full of quick tips to help you on your journey.