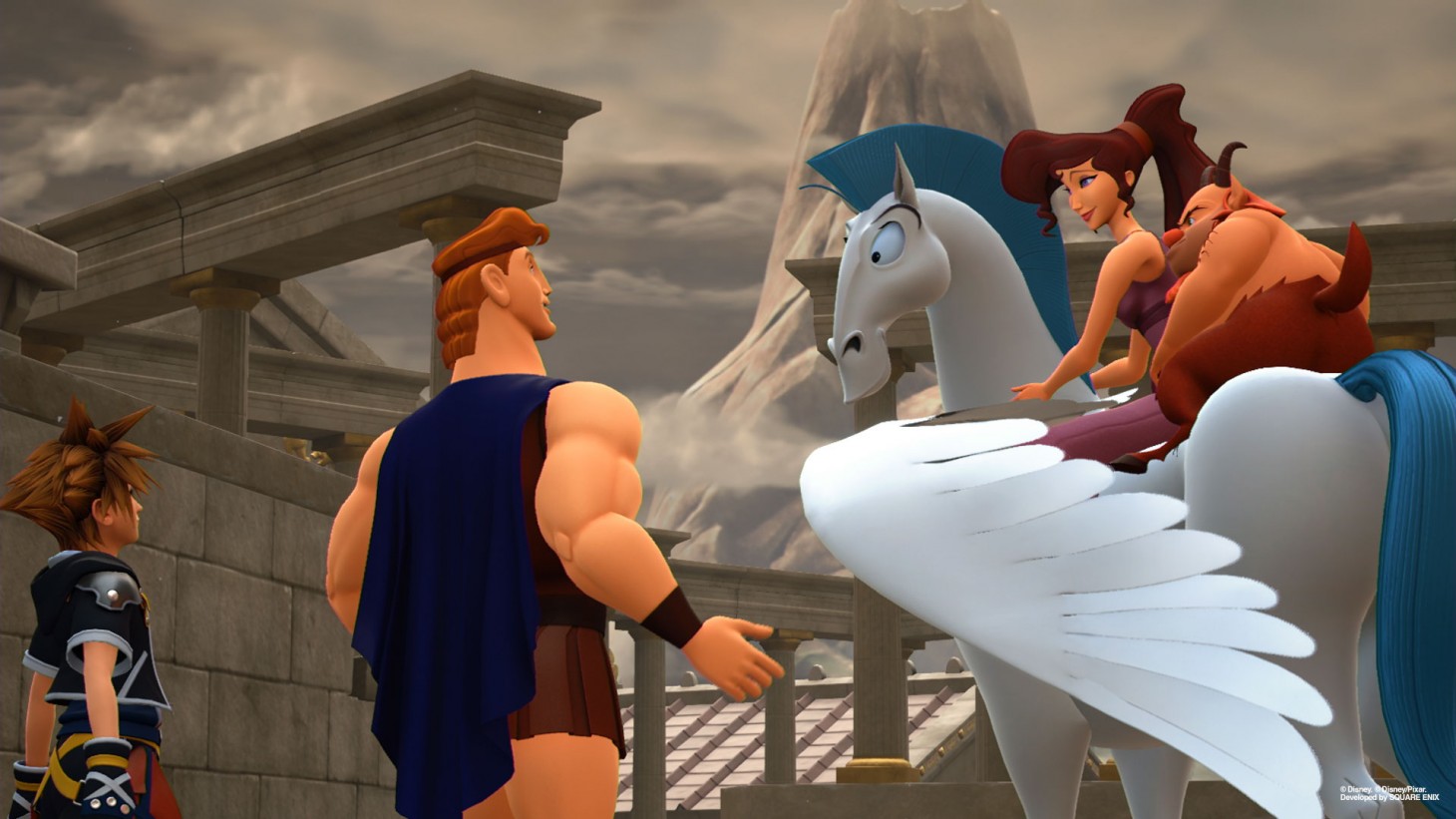 I received a couple of tweets asking if it was wise to jump into Kingdom Hearts III without having played any of the other games in the series. Game Informer's Kimberly Wallace did a nice job of outlining this scenario in her review:

"As much as I enjoyed the tale, newcomers (and even old fans who have just missed a few entries) will probably have a hard time following many portions. A memory archive in the menu provides short videos to get you up to speed or refresh your memory, but they're not comprehensive. As a result, this is not a good place to jump into the series..."

I can't place my finger on the why, but people who haven't paid attention to this series are suddenly intrigued by this one. I am one of these people to a degree. I enjoyed the first two entries but fell off of the train when the titles started sounding like algebra tests. I still have no idea what 358/2 means.

My six-year-old daughter and I love Disney, and I thought it might be fun to see what would happen if we jumped into Kingdom Hearts III. I watched a fun little video to regain an understanding of the series' basic setup, but my daughter has no clue what she's getting into. The results did not disappoint and are exactly what you would expect.

I recorded audio of our opening hour of play. Here's a rough transcript of what transpired... 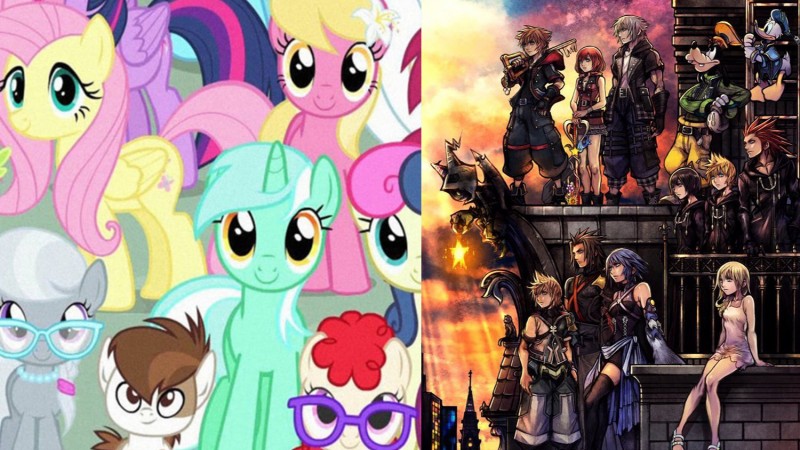 Confusion Before the Game Begins
We didn't even make it into the game, and my daughter started asking tough questions about the characters who are featured on a piece of art. After commenting that Donald Duck looks like he just fell down a flight of stairs, my daughter spent a few seconds studying each of the non-Disney characters.

Daughter: "Why do all of the people with spiky hair look the same? Are they like My Little Pony characters that all look the same but have different hair colors?"

Me: "Uh... I have no idea what to tell you. Now that you mention it, the blonde kid in the middle and the other blonde kid on the bottom may be the same character. That's odd. I don't know. They all do look similar."

Daughter: "I wonder if they have cutie marks." 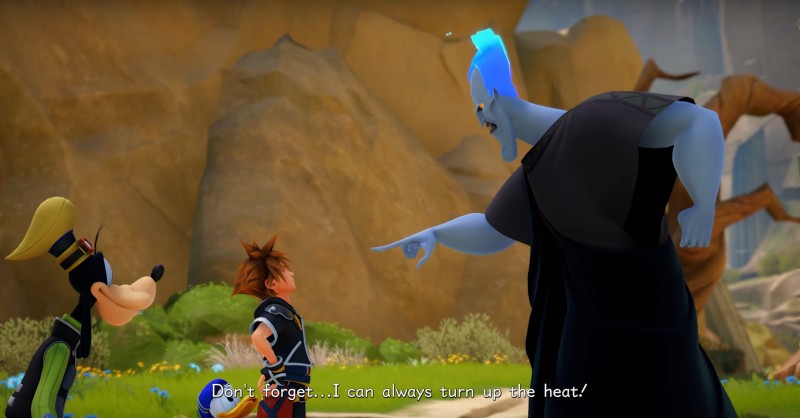 A Conversation With Hades
Needless to say, we were both confused by the opening moments of the game, which show two characters playing chess as other characters fly around and give us some form of a recap from what happened in their past. My daughter thankfully didn't ask me how the game of chess is played, but again commented that the two characters who were playing it looked the same. Confusion also came from figuring out what abilities and powers Sora would start the game with. She wanted to know why the "unicorn cat" in one of the pictures we had to interact with wasn't coming with us. I told her it was an image that represented the ability, but that didn't go over well. We eventually got to gameplay, and took turns on the sticks during the tutorial battles. We both enjoyed our time. She had no problem figuring out the basics of the hack-and-slash combat.

Our next stop was Olympus. It didn't take long for us to run into Hades.

Daughter: “Why are they standing there? Stop him! Should they get him and put him in jail?”

Me: "He doesn't seem to be doing anything evil."

Hades does something evil immediately after I say this. Sora, Donald, and Goofy are sent flying into the distance by some creatures or a spell or something.

Daughter: “Why didn’t they stop him?”

Daughter: "I would have hit him with my key, Dad."

Hercules' Confusing Rescue
One of Kingdom Hearts III's early action sequences seems incomplete. Sora, Goofy, and Donald are joined by Hercules in a rescue effort to save a little girl who is trapped on a cliff surrounded by fire. Time is of the essence in saving her. Thinking on his feet, Hercules asks the trio to climb onto the back of a statue that had fallen over. The statue just happens to be of Hercules. As odd as it is to see Hercules pick up a giant statue of himself, what happens next is largely left up to the viewer's imagination. It broke my daughter's mind.

Daughter: “What happened? Why did he throw that? What did that do? Why didn't they show what happened?”

Me: "I didn't press any buttons. They just didn't show us what happened. Weird."

Daughter: "Maybe the girl climbed on the statue. [she pauses in thought] Wait. Hercules threw them into the clouds? 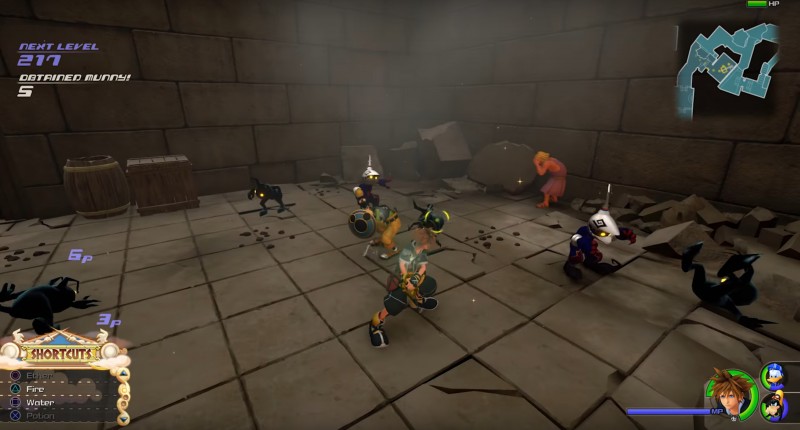 Logical Thinking
We approach a man who is in a room filled with heartless enemies.

Daughter: “What is that man doing?”

Me: “He’s covering his head because he’s scared of getting attacked.”

Daughter: “Wait. They aren’t attacking him. Can you do that?” 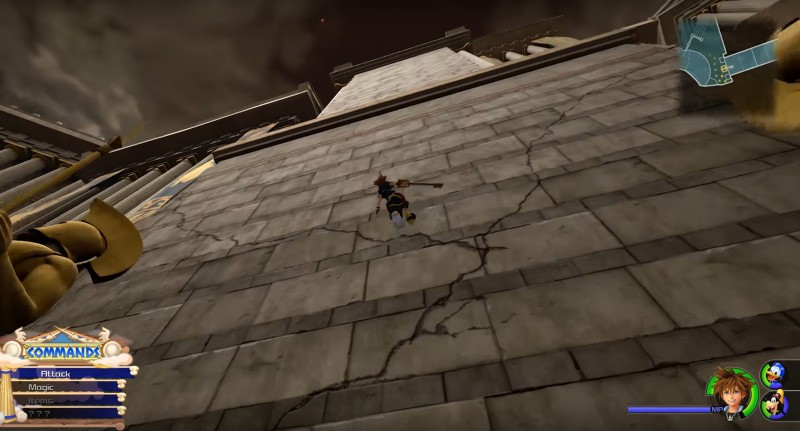 A Lesson In Game Inconsistencies
At one point in our gaming careers, we all ask ourselves why we can only interact with certain things but not others that are exactly the same. Sora running up a wall is that moment for my daughter.

Daughter: (yelling) “YOU CAN RUN UP WALLS?!”

Daughter: (Points at another wall) “Go up that one.”

Daughter: “Huh? What does that mean?”

Me: “I can only run up walls that are flashing.”

Daughter: “But they look the same.” 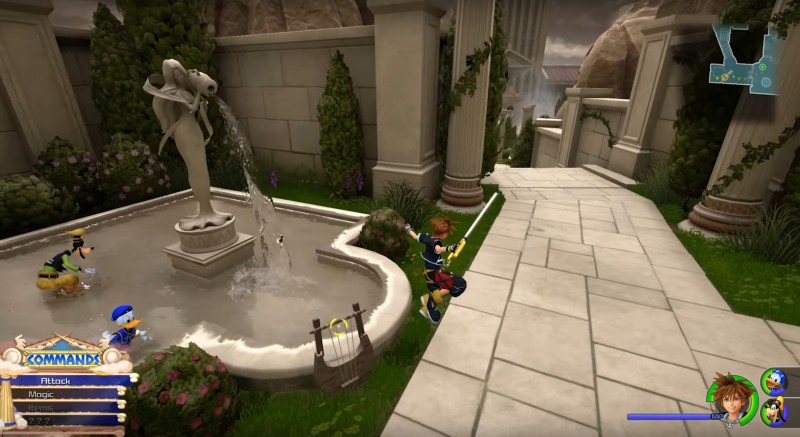 Don't Hit Everything
I stumble upon a harp that I can smack with my keyblade to get supplies. 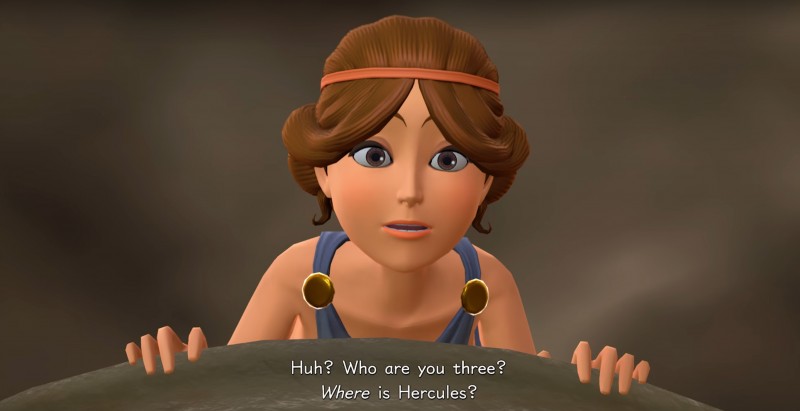 Confusion Again
We come across a woman trapped on a column.

Daughter: “She’s in trouble. How did she get up there. Ladder?”

Daughter: “Maybe she ran up it like you run up walls.”

Daughter: "But the poles are flashing like the walls! She can run up them."

Me: "Nope. The flashing may look the same, but it means I can spin on them like this." [Sora spins around pole]

Daughter: “She probably farted hard and flew up there then.” [little chuckle] 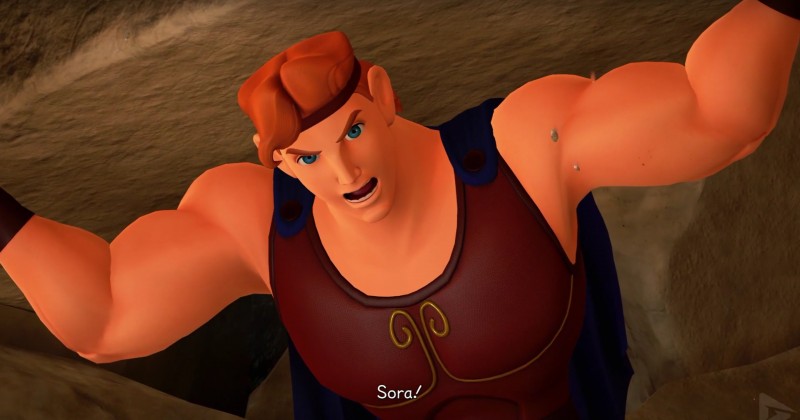 Hercules The Wimp?
My daughter has a great understanding of combat now, and even knows how to use the spells to her advantage. She doesn't quite get how the abilities or gear work. I have to handle all of that. Our journey takes us into an interior area where Hercules is trying to lift a rock over his shoulders. He’s struggling.

Daughter: “He threw a statue that was like dozens of feet long. He can’t lift that rock now?”

Me: “The entire ceiling is falling. I think it’s more weight than the statue.”

Daughter: “He must be poisoned.”

After a few minutes the roof collapses. Sora, Donald, and Goofy escape, but it looks like Hercules is dead. He emerges a few seconds later. The trio yell “Hercules!” He flexes his muscles.

Daughter: “Is he showing us that they don’t work now?”

Me: “The opposite. He’s saying he’s strong.” 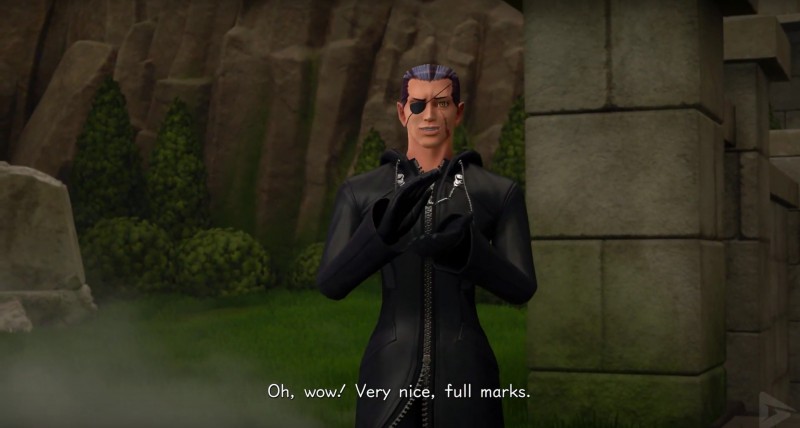 We Don't Learn From Our Mistakes
Another evil-looking character named Xigbar emerges from a portal.

Daughter: “Shoot fire at him! Don’t let him leave!” 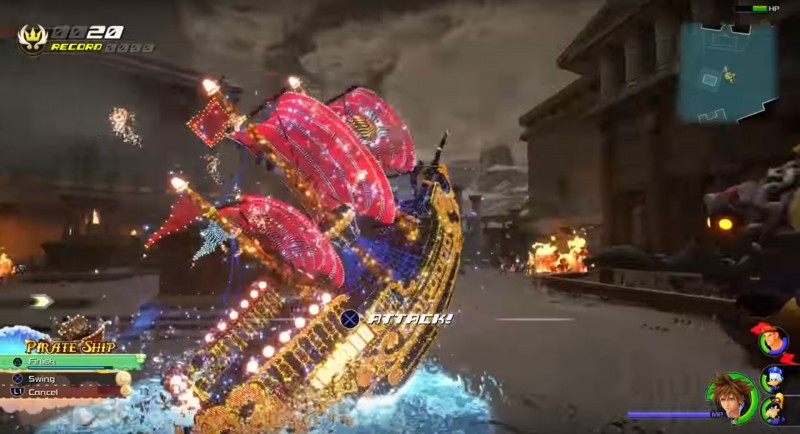 Pirate Ships are Dumb
We finally get to the first boss, which is a giant heartless. My daughter hands me the controller.

Me: “I think we’ll be fine. I just learned how to summon a pirate ship.”

I summon a ship that rocks back and forth slowly and shoots water for like 15 seconds. It doesn't look like it's doing much, but it is.

Daughter: (Dumbfounded look on her face) “That was really dumb. What? We don’t want that right, Dad?”

Me: “Actually, I think it’s super powerful, but I couldn’t tell what it was doing.”

Conclusion
I had a blast playing the opening hour of Kingdom Hearts III with my daughter. The backstory that they introduce early on is confusing, but once we landed in Olympus, the narrative became more about what was happening in the moment and we didn't have much trouble following it. The question that remained: Did my daughter have fun?

Me: "What did you think of that game?"

Daughter: "It's really fun. I like that Disney princesses will be in it."

Me: "What score would you give it?"

Daughter: [She puts on her deep-thinker face] "Probably 100."

Me: "Is that as high as your scale goes?"

Me: "So you think it's one of the best games you've ever played."

Me: "Did you think any of it was confusing?"

Me: "How much of it didn't you understand?"

And with that she went upstairs to brush her teeth and get ready for bed. The next day would bring school and perhaps a return to Kingdom Hearts III, unless of course another game became the best thing ever to play with Dad.