The Flame In The Flood Review The sun is sinking beneath the tops of the trees. A few days back you ate some rotten meat, and now you’ve got dysentery. A dog (your only companion in the wilderness) is whimpering at your side as you lay on a raft. You’ve been here a hundred times, and you’ll probably be here a hundred more. But it’s okay. Every life, you’re making it closer to the end, dragging your broken bones to the Promised Land inch by inch. You’ll get there one day.

The Flame in The Flood is a different kind of game. It requires patience and careful planning on the part of the player, a willingness to learn from mistakes, but it also expects them to have quick reflexes and be capable of making snap judgements. You play as a young woman named Scout navigating the (procedurally generated) American wilderness with her dog in the aftermath of a seemingly apocalyptic flood. She’s trying to reach the end of a river with a slapped-together raft while making frequent stops at islands and docks to hunt for items necessary for survival. I died hundreds of times during my journey, but each little death taught me new tricks that helped me avoid making fatal errors further down the river, resulting in moments of deep satisfaction where I felt I had truly earned my victories.

The locations you can explore are impressively detailed and diverse. I came across abandoned towns, bait shacks, and camp yards during my travels. While on land, you must scrounge for firewood, food, and crafting materials, all while keeping an eye out for traps and dangerous animals. Vipers, bears, and wolves are hiding and waiting to attack. The Flame in the Flood has no real combat system, so fighting these predators one-on-one isn’t really an option; you have to retreat or use traps to catch them. The materials needed to make traps are difficult to find, but if you manage to kill a wolf with one, you’re rewarded with enough meat to keep your belly full for days. Scavenging isn’t the busywork it could be; instead, it plays out like you’re navigating a minefield, carefully tiptoeing around fatal dangers to earn the most precious commodity of all: more time. It’s exciting and rarely filled with frustrating or dull lulls in action.

Once you’ve scavenged and have caught some rest by a campfire or taken shelter from the rain, it’s back on the river again, where you’re twisting and turning your way around rocks in a cleverly devised, reflex-based mini-game. If you take enough damage from hitting rocks, the raft falls apart and Scout drowns, so you must constantly repair the vessel and upgrade it with enhancements (like an overtop to keep you out of the rain). These arcadey river sections provide a different kind of joy to the calculated, slower-paced land sections and, as vastly different as these two chunks of the game are, they come together surprisingly well to create an enjoyable and challenging experience bolstered by a fantastic acoustic soundtrack.

The Flame in The Flood strikes a balance between the intimidating difficulty of other survival games and being a welcoming experience. Campaign mode functions both as a satisfying adventure in a gorgeous, Americana-style environment and a tutorial for those who want to put their skills to the test in endless mode. That’s where players try to survive for as long as they can, with their score ultimately being how far they make it down the river before they expire. Though campaign mode is far from toothless, with sickness and predators lurking around every corner, the checkpoint system is generous, allowing you to restart from the last region of the river you’ve cleared instead of going all the way back to the beginning.

A sense of mystery lurks under your actions too, as interacting with the world’s few denizens results in them spewing cryptic prose poems about the state of the world before the flood. However, the game doesn’t bother to answer most of the questions it poses. Why is Scout here? Are we truly navigating the post-apocalyptic South or is this some sort of spiritual limbo? Is Scout damned in some way, doomed to repeat the same cycle until she finally reaches the end of the river through sheer willpower? While I’m usually one for this method of breadcrumb storytelling, I didn’t care about why I was going downriver – partially because said crumbs were uninteresting, and partially because I got so caught up in the survival experience itself. I didn’t feel the need to seek out an explanation.

The Flame in the Flood has a beautiful aesthetic and a strong structure, welcoming a larger audience with its accessibility options. The trip down the river is a rocky, dangerous one, but there are rich treasures and exciting tales waiting to be discovered by those brave enough to take the journey. 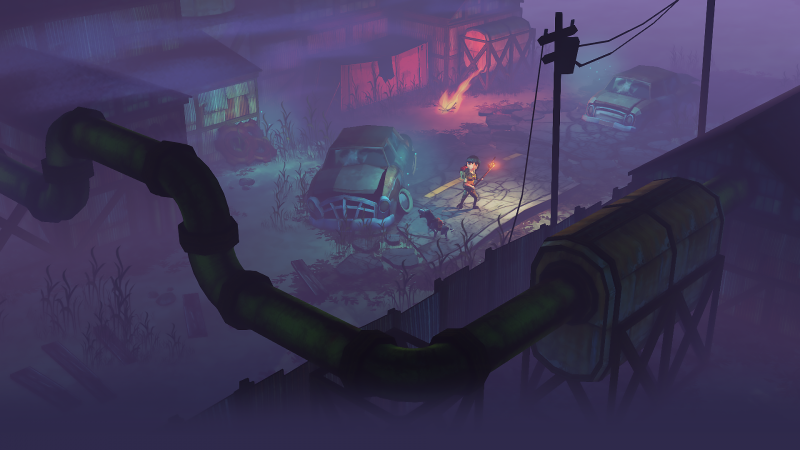 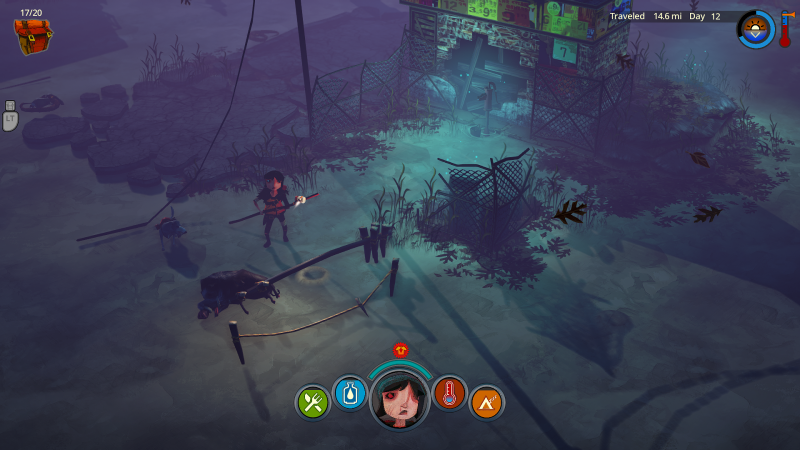 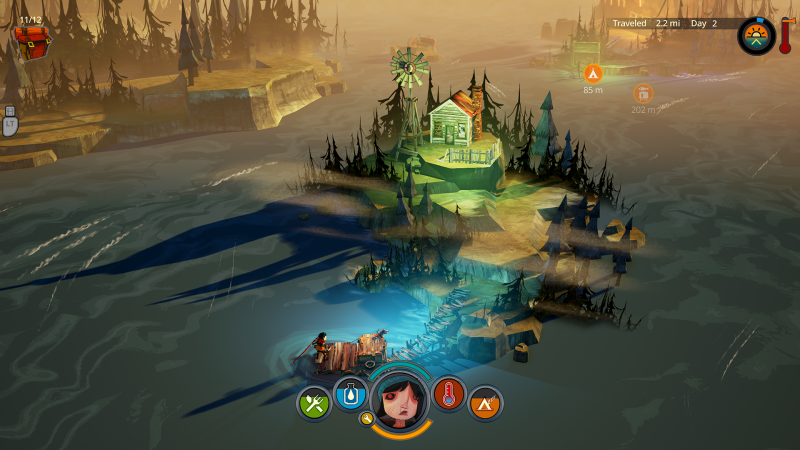 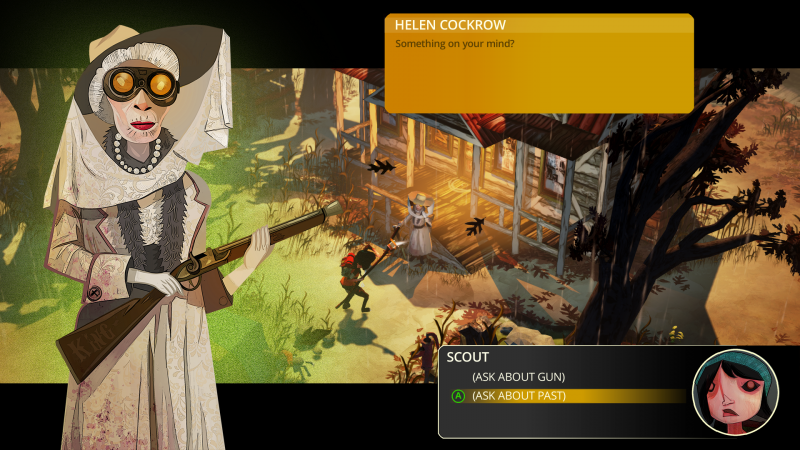 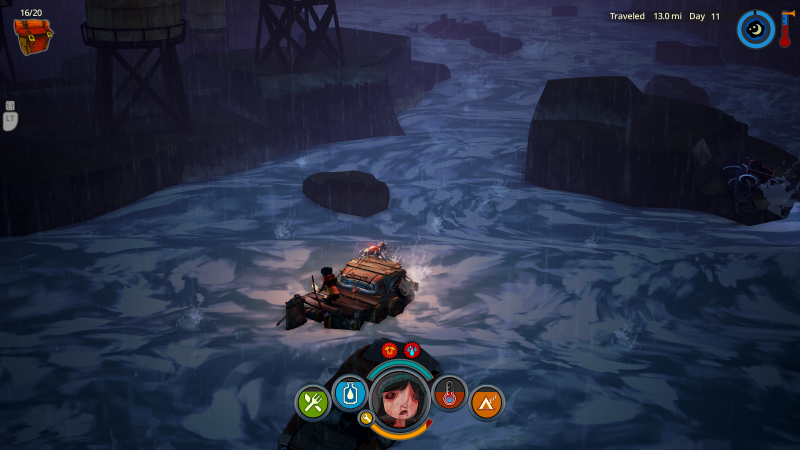 9
About Game Informer's review system
Concept
Test your survival skills on a downriver trip rife with danger
Graphics
A beautiful painted style and a load of environmental variety result in a feast for the eyes
Sound
The combination of a beautiful acoustic soundtrack and the sounds of nature make the game a joy to listen to
Playability
Exploring and scavenging supplies is fun, but minor glitches occasionally disrupt the experience
Entertainment
This challenging voyage makes for one of the most memorable and satisfying survival games in the last few years
Replay
High