Jack of All Trades, Master of None
by Meagan Marie on Mar 18, 2011 at 04:00 AM
Publisher: Sony Online Entertainment
Developer: Fire Hose Games
Release: March 15, 2011
Rating: Everyone
Reviewed on: PlayStation 3 Slam Bolt Scrappers is a very ambitious game. Not in the traditional sense of scope or presentation – the campaign is brief and visuals are highly stylized – but rather in that it attempts to mesh mechanics from completely foreign genres.

The goal is simple – eliminate the opponent’s tower. To do this, the player must engage in a cyclical process of attacking flying foes that yield colored blocks, which must be reoriented and organized to build up ones tower. Each colored block has a unique offensive or defensive ability, and when augmented to create a larger grid, increase in power. All the while the enemy player can attack you or your tower, steal weapons from under your nose, or repair their structure. To be fair, you can do the same.

The above is a very simplistic introduction to a surprisingly deep experience. Special power-ups (gifted by knocking out flying ninjas), a variety of block types, environmental hazards, and the occasional boss battle greatly change the nature of play. I can confidently say that I’ve never experienced anything quite like it.

While Slam Bolt’s concept is built on a strong foundation, the execution is less structurally sound. Combat is slow and shallow and one of my biggest qualms with the game. Throwing a punch is easy enough, but the more powerful cartwheel and “switcheroo” attacks feel unresponsive. There is also an issue with magnetism, when your character will be pulled to an enemy player despite trying to skate by. Evasive maneuvers are hard to come by so this can be particularly frustrating when you’ve secured a sizable stash of blocks and are cornered with low health. Blocking will only do you good for so long.

Combat inherently butts heads with tower construction, too, as a particularly aggressive opponent can stunt your progress by causing you to constantly misalign blocks. A transparent block native to the field can be picked up to rearrange your tower, but it’s difficult to capitalize on the feature while in the fray. And the fray is constant. If you are able to exploit the mechanic, however, transplanting a single stray square needed to upgrade a weapon is an immense and rewarding victory.

The single player campaign is somewhat brief, but offers much in the way of replayability with multiple difficulty settings and co-op compatibility. Battle Mode lets you choose levels and set the parameters of play, and is also fun with another player. As far as depth of content is concerned, my only real desire is for more character customization in order to make keeping tabs on your character easier. Palette swaps and a small assortment of hats seem trivial for such an aesthetic experience.

With the issues that surface in single-player, I feared that cooperative play would amplify said concerns. Instead of tripping over each other to place blocks, however, I found it significantly easier to decimate a tower jointly instead of alone. The AI adjusts difficulty accordingly, but with one player focusing on building and the other managing the field, the core concept falls into place. Communication is imperative to success, however, which might explain the questionable choice of local-only multiplayer. Adding additional players turns the tides again, making it even more difficult to maintain focus.

Slam Bolt Scrapper’s admirable ambition is also its greatest pitfall. In mashing genre-specific mechanics together, the game sacrifices expertise for breadth, becoming a generalist rather than a specialist. That being said, the freshness of the experience and solid foundation is entertaining and engaging, despite the occasional frustration. 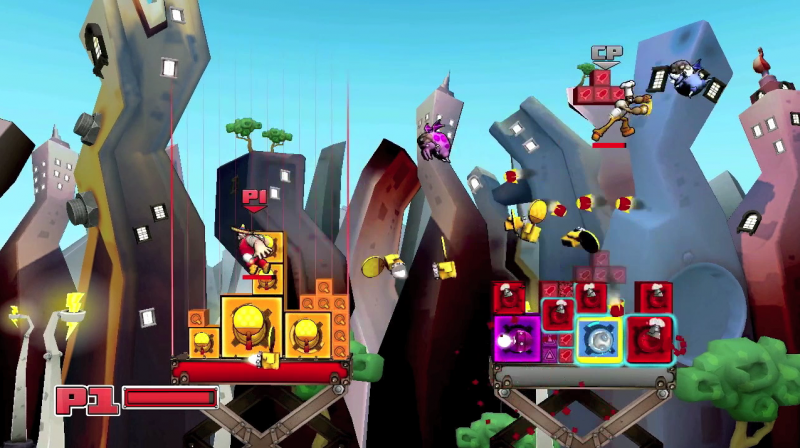 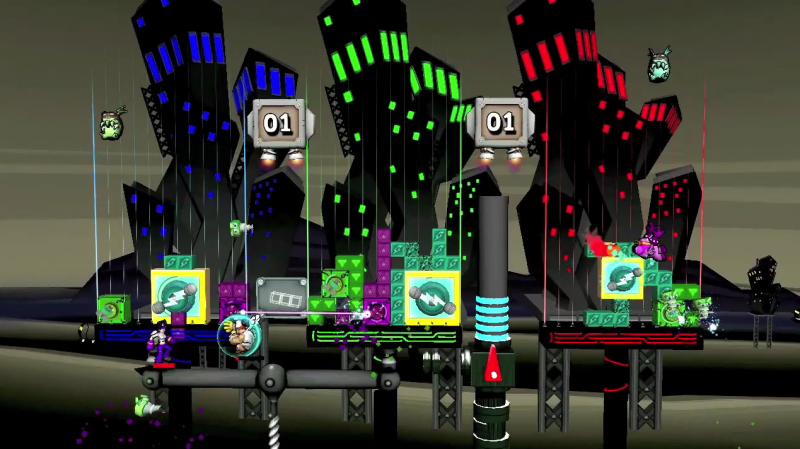 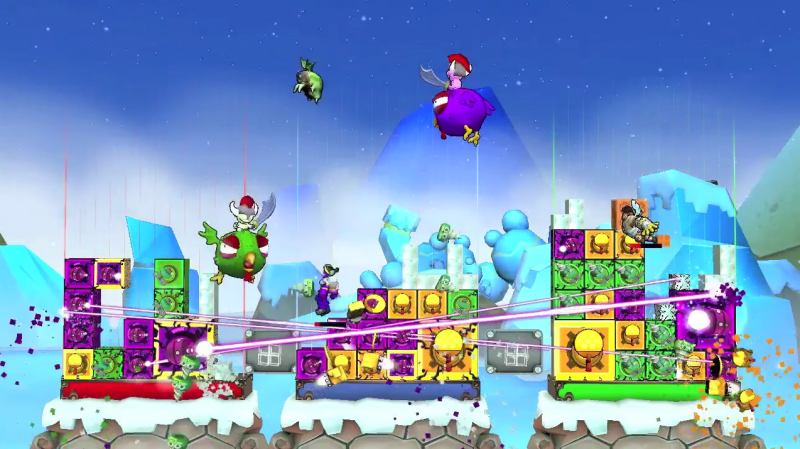 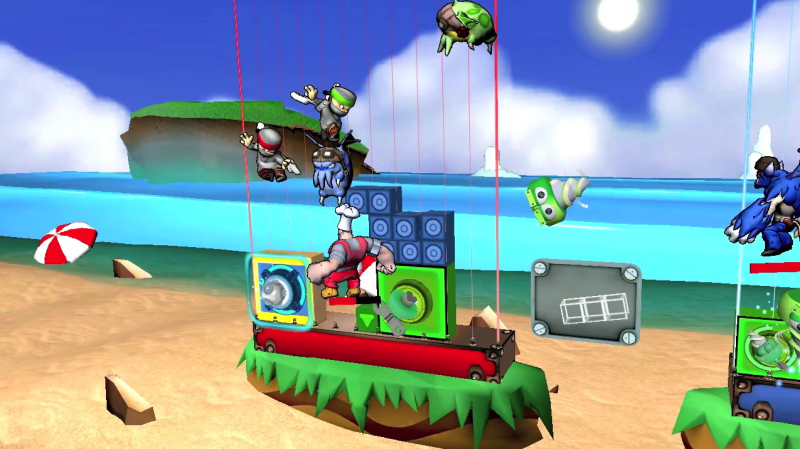 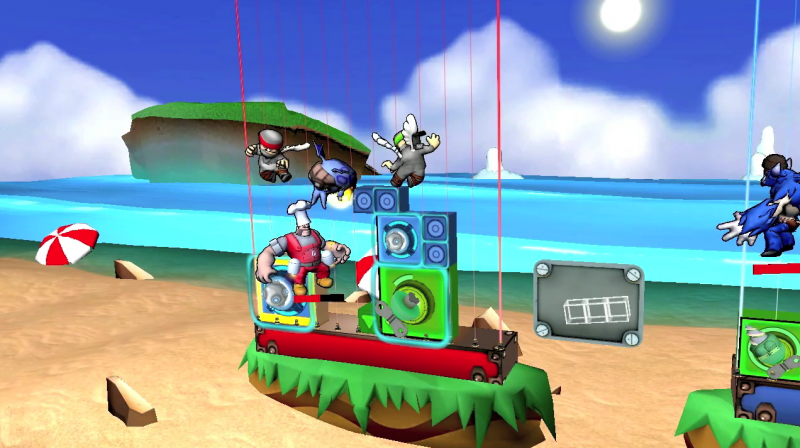 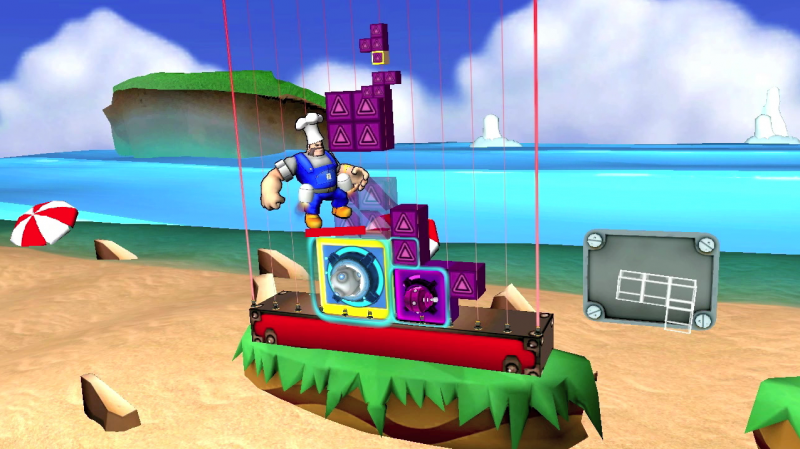 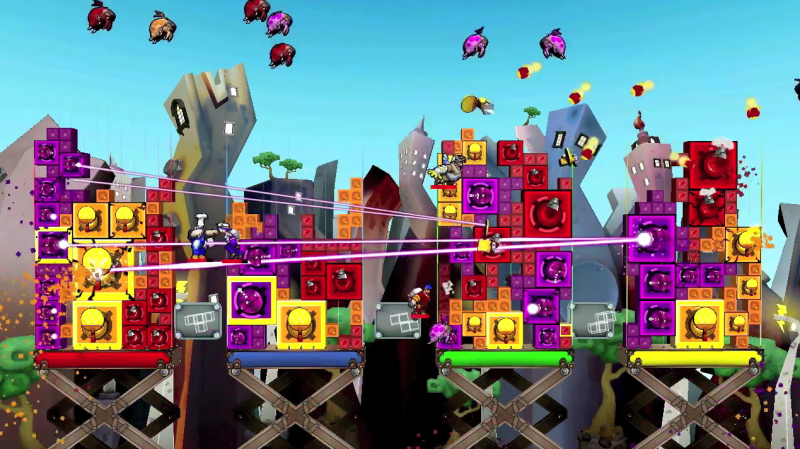 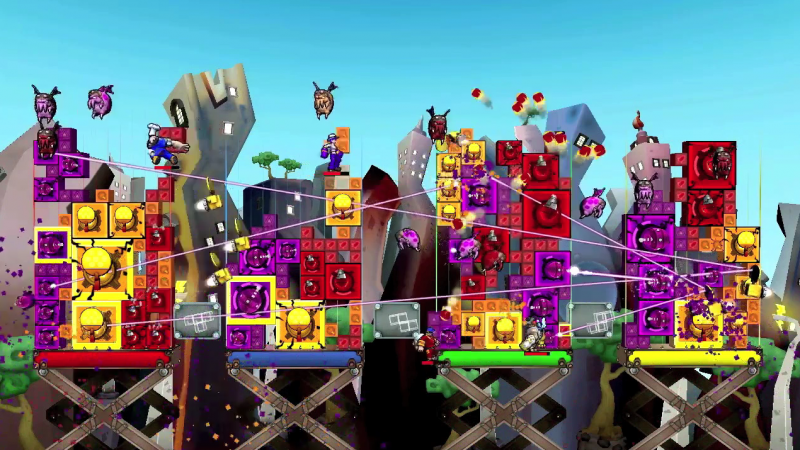 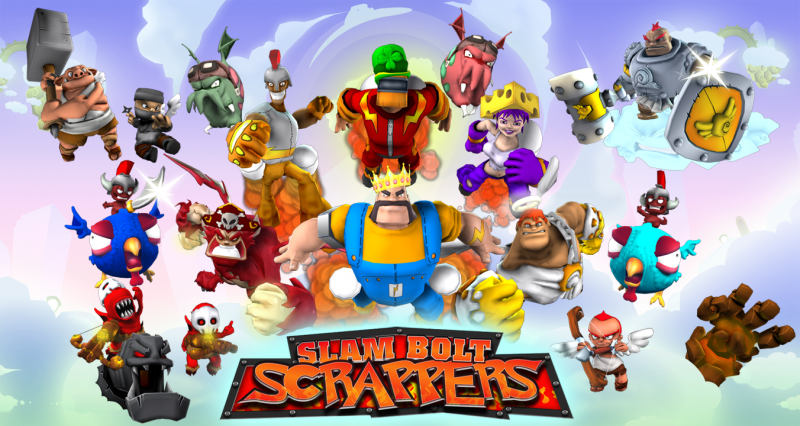 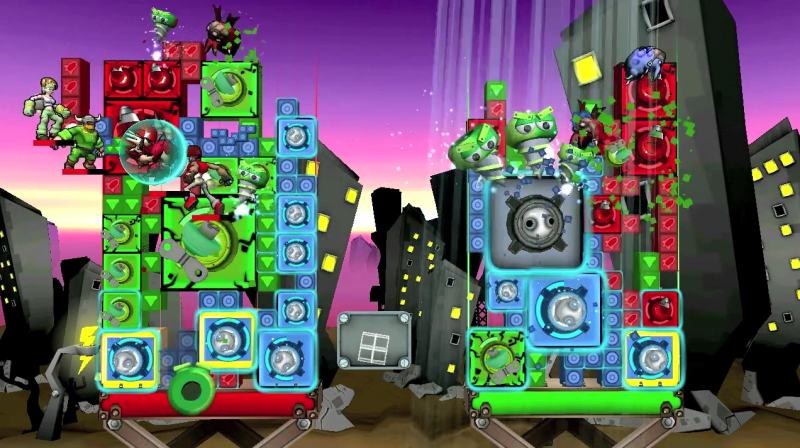 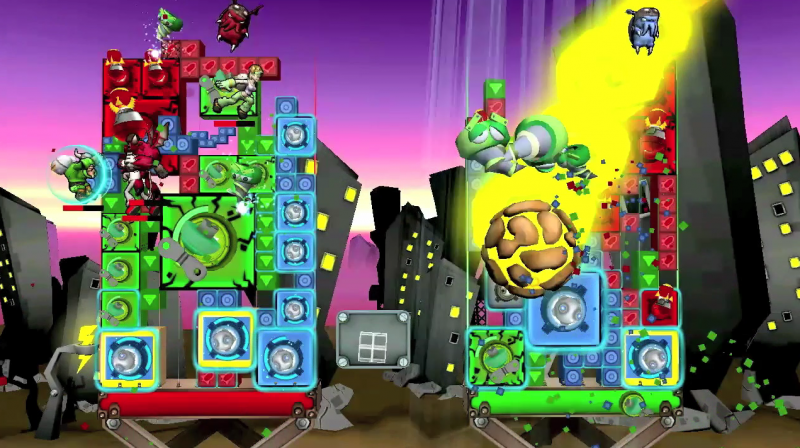 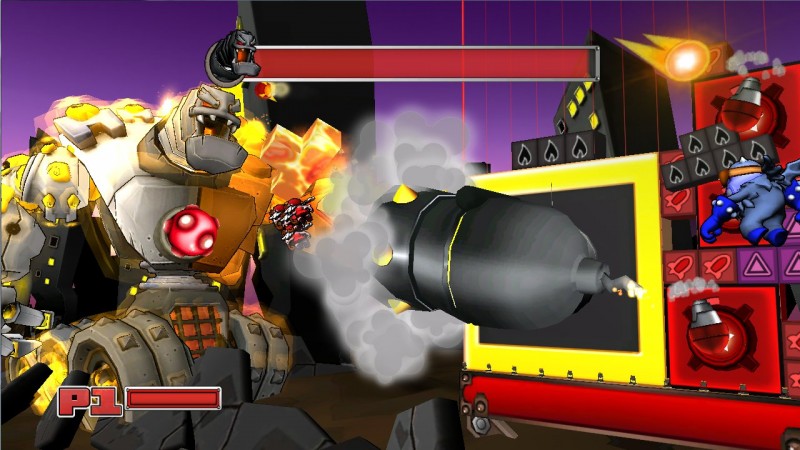 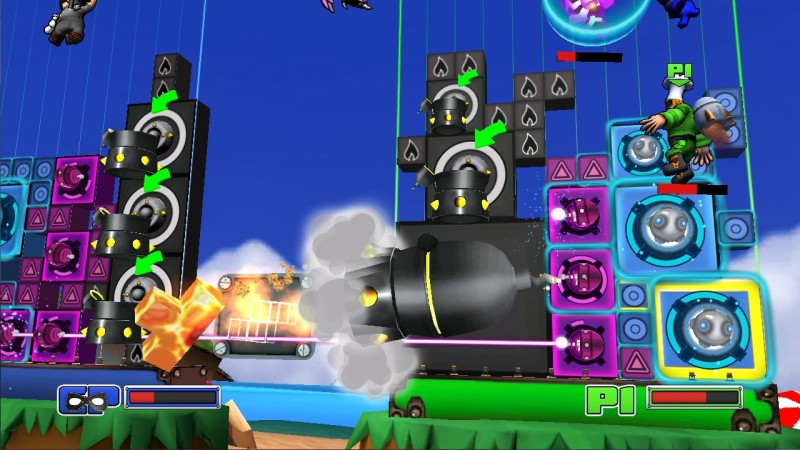 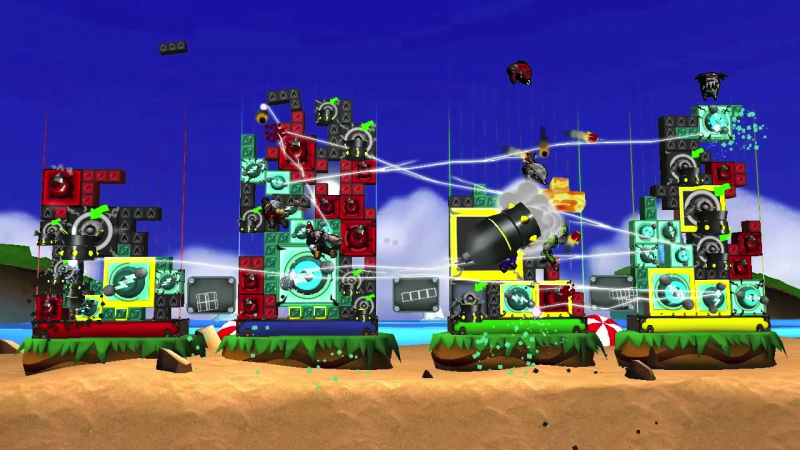 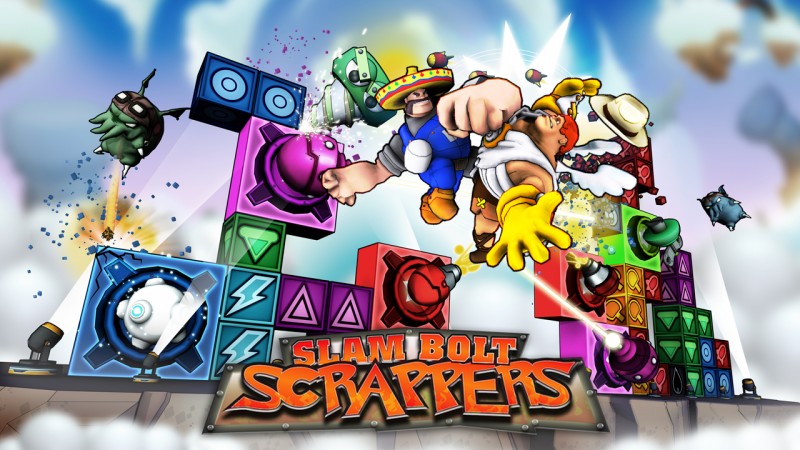 Purchase More Info
7
i
Game Informer's Review System
Concept Blend Tetris-like block-building, tower defense time-management, and traditional brawler mechanics into one chaotic experience
Graphics A kaleidoscope of shapes, colors, and constant movement, it’s difficult to keep track of your character amongst the action. UI has an annoying habit of obscuring block orientation too
Sound Music and sound effects can be grating after a while, but you’ll rarely hear it over the ruckus caused in the heat of cooperative and competitive play
Playability The depth and variations of play are impressive, making a read through the rule set mandatory. You can’t rely on drawing from similar experiences with Slam Bolt, because there aren’t any
Entertainment When the concept has been fully digested and you’re in the thick of it, Slam Bolt Scrapers is a fulfilling, fun, and original game occasionally marred by underdeveloped mechanics
Replay Moderate