The original Shadow Warrior probably ranks among the more forgettable Doom clones, arriving in 1997 shortly before the likes of Half-Life, Quake, and Unreal made first-person shooters one of gaming’s most popular genres. Flying Wild Hog’s 2013 reboot channeled the irreverent humor of the original game into a modern first-person slasher/shooter that was smart enough to bank on its own arcadey action rather than mine nostalgia. Flying Wild Hog’s sequel tries to expand on that solid foundation, introducing RPG-like elements and a quest system in a semi-open world that emulates the likes of Borderlands and Destiny. While that sounds promising on paper, Shadow Warrior 2 is a prime example of how bigger is not always better.

One of Shadow Warrior 2’s biggest problems is it tries to create an epic adventure story that rests chiefly upon callbacks to the reboot. As someone who played through that reboot last year, I was constantly frustrated by the sequel’s expectation that I remember each and every archetypal character I met previously. The story makes no effort to explain every “familiar” face you meet or what role they have to play in the grand scheme of things. If you don’t remember how villain number one was a different kind of bad guy from villain number two in the reboot, you’re going to spend a good portion of the sequel trying to figure out the surprisingly convoluted relationships between characters.

Many games of this type discard story in the name of wacky, bloody shenanigans but Shadow Warrior 2 is insistent on its plot. The game asserts that its characters have depth and heart beyond profanity and bloodlust, that there is some element of tragedy at the heart of the story. This results in a story that’s constantly failing to explain why you, as Lo Wang, are going to do the thing you do, usually fetch quests or assassination missions that go from being entertaining to downright dull rather quickly. The missteps with the plot would be more forgivable if the dialogue was snappy or entertaining, but the jokes are a combination of stale pop-culture references, potty humor, and quips that feel like they’re trying so hard to be edgy – none of it really works.

The solid gameplay from the reboot receives a few tweaks in the sequel, and not all of them for the better. The first game was a straightforward, corridor game focused on killing a bunch of bad guys with swords and guns. The simple but fun formula worked. The second game expands its size, presenting the player with various zones they can explore to complete side quests to earn weapons and money to buy upgrades. A leveling system also lets players earn skill points to give Lo Wang new powers or upgrade existing stats, like health or how many rounds of ammo he can hold. However, these additions’ effects are incremental at best – mere distractions that force you to navigate a series of menus so you can drop points into categories you probably won’t really care about. In keeping with the RPG-lite adjustments, enemies now have health bars, and numbers leap off of them when you damage them. You can turn these things off (like I did) but that doesn’t stop foes from feeling like bullet sponges. However, perhaps the biggest disappointment is the weapon quality. Like Borderlands 2, Shadow Warrior 2 boasts a sizeable arsenal of weapons, but most of them are unsatisfying to use. Pistols, assault rifles, bows and arrows, and shotguns all feel seriously underpowered. Melee weapons are an exception, it’s the only notable element of the combat.

Shadow Warrior 2’s melee combat is consistently entertaining and occasionally spectacular, with enough speed and special powers for the player to take on entire squads of enemies and dance around them, slicing them to ribbons like some violent ballet dancer. It’s often a gruesome display but it does a great job of making you feel powerful by letting you string together combos, like summoning spikey pillars from the ground to pierce enemies, stunning them and leaving them open to your attacks. You can also briefly turn invisible and sneak around the battlefield to launch an attack that does nearly double damage on unsuspecting enemies. In these moments, Shadow Warrior 2 unloads its treasure on the player, introducing a violent rhythm that’s enjoyable and easy to master. Unfortunately, that loop cannot sustain itself for the entire 15-hour campaign, which is how long the game takes if you pursue side missions for better weapons and to upgrade your skills to make melee combat a viable option in later fights.

Once I completed Shadow Warrior 2, I sat watching the credits and feeling a strange sensation of relief and disappointment at having finished yet another first-person shooter that trades a sharp focus for hours upon hours of grinding to earn unrewarding content. The reboot, in spite of its dumb writing, felt fresh and was consistently entertaining throughout its campaign thanks to its focus. The sequel, however, feels stretched out, like it’s trying to be an RPG, an open-world game, and a shooter all at once with little success. In the end, there’s precious little of Shadow Warrior 2 that makes for a compelling experience. 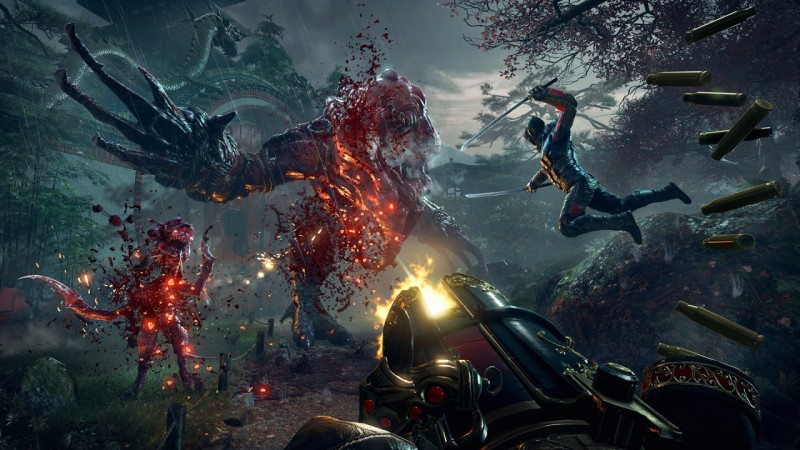 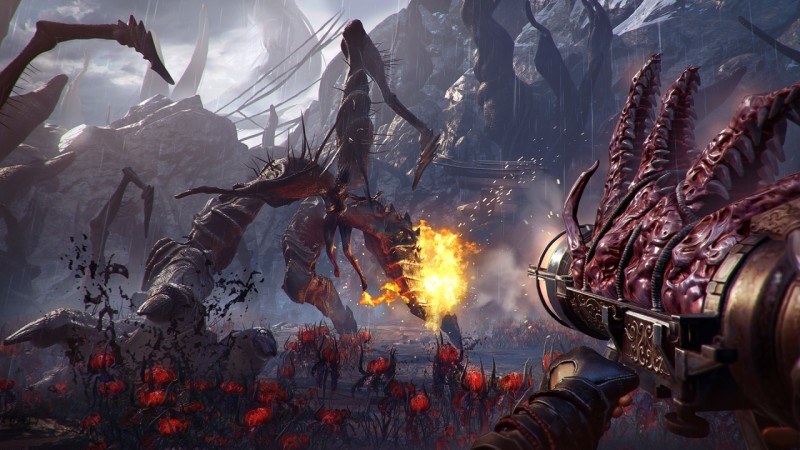 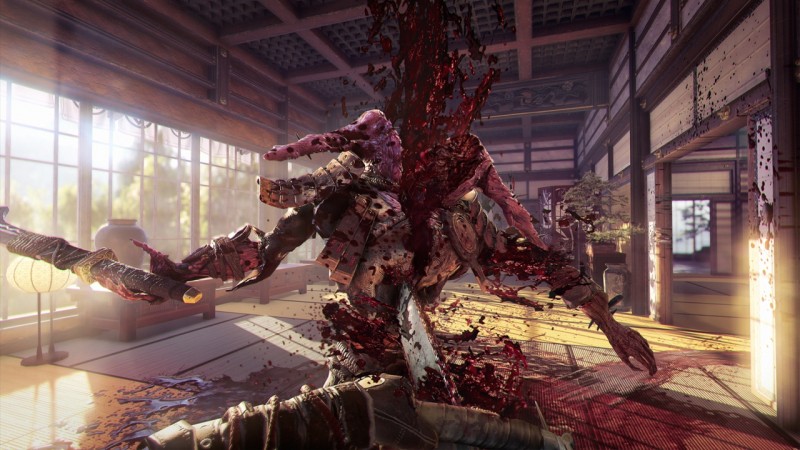 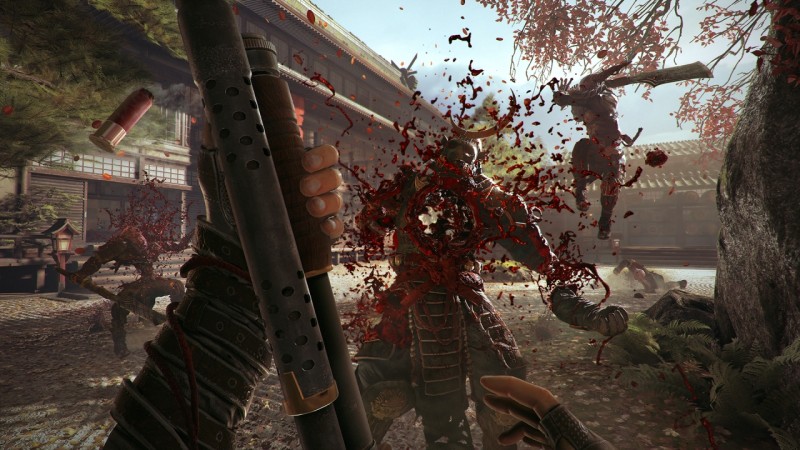 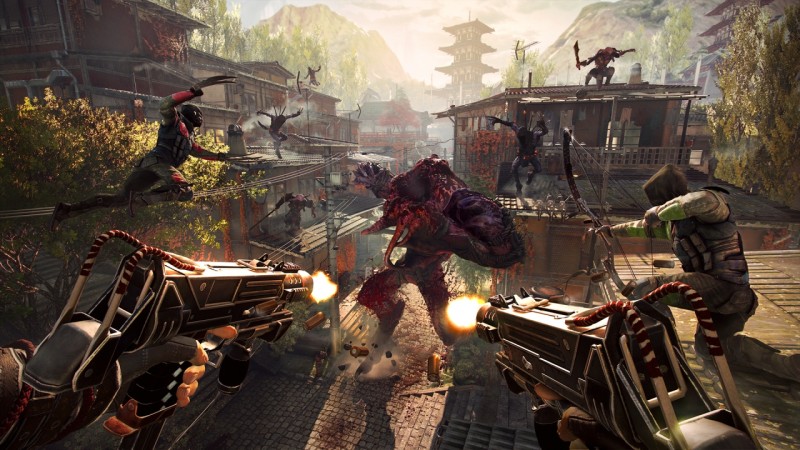 6.75
About Game Informer's review system
Concept
Slash and shoot both demons and yakuza once again as sarcastic hitman Lo Wang
Graphics
Environments are varied and gorgeous; enemy designs are forgettable
Sound
Guns sound weak and the background music never stands out
Playability
It takes a while to get used to the superfluous RPG-lite mechanics of but once you do, the game plays like a pretty straightforward action game
Entertainment
When Shadow Warrior 2 is firing on all cylinders, it’s an enjoyable action-packed experience, but those moments are few and far between in a campaign that’s too long for its own good
Replay
Moderate