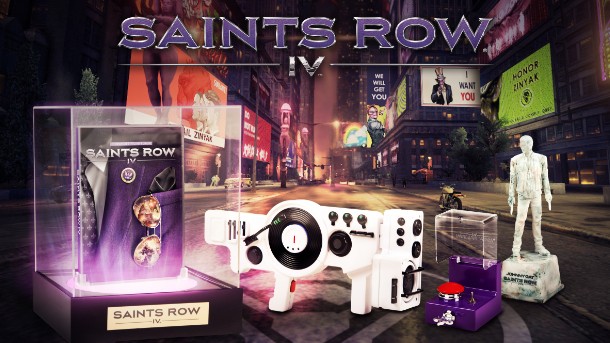 Deep Silver and Volition are never satisfied. Sure, everyone who pre-orders Saints Row IV gets theCommander in Chief bonuses. For the collectors, there's already the Super Dangerous Wub Wub edition with a real life (non-lethal) dubstep gun. Now, alien leader Emperor Zinyak is taking matters into his own hands by declaring that Saints Row IV is the Game of the Generation.

Well, at least that's what this new super premium version of the game is called. In addition to the dubstep gun, the Game of the Generation edition comes with a dubstep doomsday button, a memorial Johnny Gat statue (he'll love that now that he's back from the dead), a light-up display case with an individually numbered plaque (only 5,000 of these are being made), and a protective pouch. (The light-up case and protective pouch are the upgrades from the Super Dangerous Wub Wub edition. The dubstep doomsday button and statue are included with both collector's editions.) 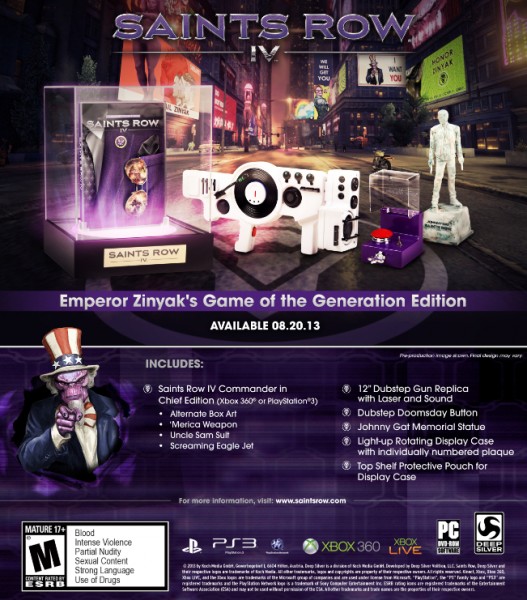 The collection will retail for $129.99, but you'd better move quickly. These are very limited. We've also finally have some new information about benevolent alien invader ruler, Emperor Zinyak. His people have provided the following bio:

About Emperor Zinyak
His Majesty Emperor Zinyak is the ultimate ruler of the Zin Empire, a civilization of extraterrestrial beings bent upon world domination. After arriving at Earth on a routine conquest mission, Zinyak took it upon himself to select the best and brightest of the human race and graciously bring them under the watchful care of the Zin, initiating the humans to their superior ways via simulations of their pitiful world. In his free time, Emperor Zinyak enjoys sipping brandy next to a warm fire, reading classic works of fiction by Jane Austen and catching up on the delightful BBC series, Downtown Abbey.

There's also a new Hail to the Chief video, which involves mascots and bowling and a dump truck.