Many of my friends are board game lovers, but even in that group there’s a split in preference. Word games like Scrabble and Boggle exercise a different part of the brain than more strategic games like Risk or Catan. No longer will we have to choose, though, as Scottish developer Denki has done a wonderful job mixing strategy and vocabulary in Quarrel.

When you begin a round of Quarrel on any of the game’s 12 maps, the board is automatically sectioned off into territory that is equally distributed amongst up to four players. During each turn, players can choose to move units between their own territories, hunker down and build up forces, or go on the offensive and attack enemies. When you attack an enemy, both of you are presented with a jumble of eight letters with Scrabble-style points. Both players create a word, the maximum length of which is determined by the number of troops you have on that territory. The player with the highest-scoring word keeps the contested territory.

Though there are thematic changes to the maps – from jungle ruins to a showy volcanic setting – the core gameplay remains the same without any gimmicks, which is as it should be. Beyond quick matches and a domination mode where you work through each map, Quarrel’s single-player options include one-on-one showdowns against a list of increasingly difficult AI players and a challenge mode that tasks you with earning a certain number of territories in a row or beating players in a series of eight-troop match-ups.

My only minor complaint with Quarrel’s design is the emphasis on timing. I’m the kind of Scrabble player who likes taking my time to figure out the best possible word. That’s allowed in some modes of Quarrel, but if you and your opponent tie in a word battle, the victory goes to whoever was fastest. I would’ve preferred a further test of language skills rather than speed acting as a tie-breaker.

The one major improvement between this version of Quarrel and its previous, also-excellent iOS release is the addition of online multiplayer. Up to four players (including a mix of a real players and AI) can jump into any game. Unfortunately, the relatively slow pacing of Quarrel and the lack of stickiness to the multiplayer – no level-ups, no unlockables, etc. – means that most players will jump out of a game as soon as they realize that they aren’t going to win. At least the game replaces anyone who bails with an AI opponent smoothly and without interrupting the action.

Minor issues aside, Denki has created a wonderful, addictive game that I’m sure I’ll be returning to throughout the year. Whether you’re a dictionary-reading diehard or an armchair general, Quarrel has enough depth and charm to keep most gamers smiling. 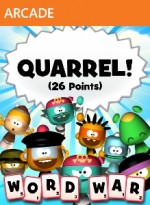 Purchase More Info
8.5
i
Game Informer's Review System
Concept Mix the word hunting of Scrabble with the strategic territory control of Risk for a great virtual board game
Graphics The simplistic, colorful visuals haven’t been upgraded much from the iOS version of the game, but they get the job done
Sound The cheery music is as forgettable as the screeching army noises are annoying; turn the volume down for this one
Playability The layer of unit management provides a fun tactical twist on what would otherwise be just another Scrabble clone
Entertainment Despite limited online multiplayer prospects, Quarrel is fun, addictive, and well worth playing for any word fanatic
Replay Moderately High