They say football is a game of inches, and this is true for Madden NFL 13. Fans judge the series by so many details that it’s hard to point to any one in particular that makes or breaks the game. This year’s title attempts to cover a lot of ground for the franchise, and the outcome is akin to a QB throwing for 400 yards and still not winning the game. A lot went right even if it wasn’t a resounding victory. In the case of Madden 13, there is such a thing as a moral victory.

Connected Careers is a brilliant mode that in one fell swoop makes the online franchise feature set the same as the normal offline one, introduces XP to upgrade players and coaches, bolsters the stagnant Superstar mode (including being able to call your own plays), and injects year-round drama into your franchise.

The XP system is great because it lets you progress your players in the areas of your choosing (the CPU also does a decent job if you auto-upgrade), while also incorporating natural player progress/regression and rewarding great performances and hard work at practices. It’s a well-done system that invests you in your team in a way that makes sense. My criticism of the XP upgrades is that they could do a better job of letting coaches influence their team. Assistant coaches, coordinators, and training/scouting staffs would add an extra dimension to coaching.

EA Tiburon also overhauled scouting and free agency, with the former vastly improved from last year. I like being able to choose which attributes and traits to scout, and with the scouting upgrade (a must-buy) the draft actually functions. The entire draft process is fun because of the little surprises that pop up during scouting and Trey Wingo’s draft-day audio profiles on draftees. Maybe a potential draft pick goes back to college or drops due to character concerns. Stories like these and many more (in one playthrough, Kurt Warner came out of retirement) surface in a news hub that’s augmented by media tweets, and they add a texture to each season which has been missing in past franchise modes.

As much as I like Connected Careers, some things are missing or unnecessarily frustrating. The lack of an overarching calendar makes it hard to know how many scouting periods are left before the draft and how many times you can bid on players in free agency. Furthermore, you can’t see all of a player’s info when you try to sign or trade them, and other useful info is needlessly buried (although there is a SNAFU in the Team Needs screen that lets you see the actual overall ratings for some potential draft picks). Restricted free agents, variable contract structures, practice squads, and other franchise features are still absent. For some reason EA even removed the Combine and pro days.

If there’s one glaring mistake that brings Madden 13 down, it’s the new Infinity physics engine. It sometimes makes good on its intent to bring more realistic physics, varied hits, and multiple contact points on the body, but the effects of player collision are inconsistent. You never know if you’re going to unexpectedly trip during inside runs, and the new physics system can make players look sloppy, with arms flailing, legs buckling, and players flopping on the ground. The tackles sometimes feel pre-determined, and suction blocking and tackling still occurs.

The saving grace of the onfield experience is the new passing game. Similar to the host of improvements included in this year's NCAA, Madden's new passing game is a big boost and one that fixes the super-jumping linebackers of the past. It opens up the field to QBs, allowing them to pass to areas of the field that previously were off limits, but it's not too powerful. Although you can pick on defensive backs who don't see the ball (via the game's new head tracking), you have to be very careful not to throw an INT when you see a DB who is peeking in the backfield.

Both Madden 12 and Madden 13 are incomplete experiences, but in different ways. The former wasn’t a good game, whereas this year’s title introduces several aspects that need to be improved instead of scrapped. New passing gameplay similar to NCAA 13 opens up the field for QBs, and the XP system is a benchmark for the franchise. We haven’t seen the best Madden has to offer, but it’s a lot easier to rebuild when you have the right pieces in place.

You can also check out our strategy guide for Connected Careers. 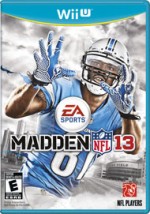 The game covers a lot of ground, but the outcome is akin to a QB throwing for 400 yards and still not winning the game. It's a moral victory.

Purchase More Info
8.25
i
Game Informer's Review System
Concept Madden eschews going for the first down and throws deep for the end zone with a slew of additions
Graphics The motion blur effect can be really cool. However, it looks odd from time to time
Sound Jim Nantz and Phil Simms are a refreshing addition even if their commentary lacks relevance at times. Trey Wingo steals the show with his draft-day player anecdotes
Playability Niggling issues arise throughout the game, from inconsistent physics to hard-to-reach info in Connected Careers. Legacy gameplay issues are also present. I love the changes to the passing game, however
Entertainment At times I had more fun off the field than on it, but this edition puts the franchise in the best position it’s been all generation
Replay Moderately High