Last Rebellion, the latest RPG from publisher NIS America (and one of its few PS3 releases), takes place in a mystical realm known as Junovald. Once split into two warring kingdoms, the land has been united, but a divide still exists in the form of Meitilia and Formival, two dueling gods. The former wields the ability to take life, while the latter has the ability to grant it. In a minor break from JRPG tradition, you take on the role of two servants of Meitilia, the death goddess. Male lead Nine Asfel is a Blade, a powerful warrior who can destroy monsters physically. His female counterpart, Aisha, takes on the role of a Sealer, a magic-focused combatant who can wipe away enemies’ souls after they’ve been killed.

If that introduction makes you drowsy, keep in mind that it’s only a small portion of the fantasy gibberish that overwhelms the plot. Within 10 hours, the game throws more bizarrely named, overdressed characters and insane metaphysical concepts than I could stomach in a month’s worth of gaming.
Even if you can ignore the bigger picture, the main characters are neither interesting nor likable. Nine’s name may as well be his age, considering that most of his dialogue consists of whining like a petulant pre-teen who’s ungrateful even though he’s been raised from the dead. Aisha’s not much better, though her catty demeanor might be explained by her awful traveling partner.

The manner in which the story is presented is even more insulting. Instead of showcasing plot events in the game engine, major story segments are presented in the form of concept art. I’m sure there’s someone out there who will find said art good-looking enough to warrant showing off, but it feels like the developer didn’t have the resources to create these moments in-game. None of these events are wildly complicated, either. The main characters face off against tons of trolls in battle, so there’s not even a bad excuse for why such a confrontation during the plot couldn’t be presented in-game instead of through an art designer’s notebook sketches.

Last Rebellion shows a brief shimmer of potential in its unique battle system. When you run into a monster in one of the game’s many generic environments – a green field, a gray mountain, a red lava pit, etc. – you enter a turn-based battle. For physical attacks, you can target specific body parts. Attack them in the right order, and you’ll gain bonus damage and more “marks” on your opponent. Marks, in turn, must be used to cast devastating spells. In addition to mastering the order to attack each new creature’s body parts, Aisha must also seal them once their health is gone, or they’ll be revived after a few turns.

This system’s complexity grows as the game progresses. Later you get a special bar that fills up as your characters are damaged. You’re given some abilities to manage how the gauge fills, but once it hits 100 percent, the death goddess Meitilia descends from the clouds to wreak havoc on your enemies. As the game continues adding layers to its system, a lot of interesting options arise for how to handle the encounters. Unfortunately, any joy at figuring out new battle strategies is hindered by turtle-paced fights that drag on for ages. Even the lowest-level beasts require at least a couple rounds of watching the young heroes slash at each body part individually. Tack on an extra round for sealing every monster you fight, and the battle length becomes interminable.

The game’s leveling progression also seems wildly unbalanced. In one zone early in the game, I found myself dying in encounters with random enemies and had to grind out levels for an hour before I could progress. Then, after a relatively easy boss battle a few hours later, I was unceremoniously gifted nearly five levels. This made me just powerful enough to survive in the next area. It’s almost as though planned areas were cut from the game without a proper rebalancing of enemy levels and experience distribution.

As I added up all of the areas in which Last Rebellion is lacking, I couldn’t figure out if the developer had great intentions that it just couldn’t execute or if the team simply didn’t care. Whatever the case, it’s one of the least polished and least impressive RPGs I’ve played this generation. With tiresome combat, empty environments, and the incomprehensible translation job, everything about Last Rebellion comes off as a bargain bin RPG that has learned nothing from the last four years of game releases. 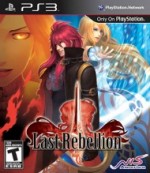 NIS America's latest PS3-exclusive RPG has an interesting battle system but not much else to be happy about.

Purchase More Info
4.5
i
Game Informer's Review System
Concept Dupe genre fans into buying one of the few JRPGs on the PS3 even though it sucks
Graphics Mediocre concept art breaks up bland in-game environments
Sound Voice actors so bad that they make a badly-translated script sound even worse
Playability A slightly intriguing combat system is held back by the slow pace of battles
Entertainment A nonsensical story and exhaustingly long battles bury anything of value
Replay Moderate