The sign of a good mystery is that it keeps you guessing until the end. For all of its goofy characters, motion-based minigames, and occasional frustrations, Guilty Party does just that.

The easiest way to understand Guilty Party is to think of the old mystery board games Clue and Guess Who. Like Clue, you explore the different rooms surrounding the location of a crime scene, gathering evidence on the culprit. Like Guess Who, the clues help you whittle down the list of suspects by hinting at the physical attributes of the criminal -- their gender, hair length, height, and weight. You only have two options for each trait, which seems like it could make things too simplistic, but in every case I played through, I was uncertain right up until I uncovered the final clue.

Guilty Party is split into two modes: Story and Party. Story Mode has six main cases, plus a prologue and a finale. These mysteries have set criminals and clues, and each is bookended with a silly cutscene that moves the story along. The plot, about a family detective agency being tormented by the devious criminal mastermind Mr. Valentine, is inconsequential, but the dialogue and voice acting are funny enough to keep players of all ages entertained.

The family runs the gamut of mystery story stereotypes, from the superhero wannabe Kid Riddle to the Sam & Max-style comedic noir detective coincidentally named Max. A kung-fu-wielding granny named Charlotte is thrown in for good measure. The other female family members play it straight to the point that they’re boring, but everyone else provides a few chuckles during the team’s absurd exploits. My personal favorite line: “Oh, Hugh the manatee!” screamed while a zeppelin explodes in the background. Party mode exchanges the storyline for randomly generated mysteries and more ways to mess up your opponents. Though Party mode can be played cooperatively, the real fun is in playing competitively, where you get to draw cards to choose what traps Mr. Valentine sets for other players after your turn.

The only downside is that in the chaos of locking other detectives in rooms, stealing their move tokens, and knocking them out, it’s pretty easy to miss out on clues and leave your crew unable to solve the mystery before time runs out and the bad guy escapes. Get ready to be annoyed by your character screaming the same two or three lines every time you play a card or win a minigame as well. "Kid Riddle strikes again!" And again. And again...

While the mystery metagame is enjoyable, Guilty Party’s minigames are passable at best. Many are extremely easy, such as fanning away the dust in a crime scene to uncover clues or tickling a suspect to get them to reveal information (both accomplished with the same frantic waving of the Wii remote). If you solve these without trouble (as players of almost any skill level will), the game recommends moving to a higher difficulty setting. When this happens, you’re inevitably going to bump into one of the rare overly difficult minigames, such as an awkwardly fast-paced rhythm game or a thumb-wrestling match that’s far too hard.

Though they’re hardly compelling, the minigames are at least numerous and easy to learn. I never repeated the same tasks often enough to get bored with them, but I also never found myself confused when new mechanics were introduced. They basically operate as a minor and inoffensive distraction for families and friends. If you’re a fan of board games or enjoy gathering people around the TV to play together, Guilty Party will have you scouring for evidence and unmasking crooks for weeks.

Off
On
Off
8
About Game Informer's review system
Concept
Spice up bland Wii minigame collection by mixing it with a Clue-style board game
Graphics
Great character design and detailed settings make for a sharp-looking SD game
Sound
Strong voice acting and clever writing make up for an annoying theme song and repetitive catchphrases
Playability
Three difficulty settings ensure that anyone can play, though minigames vary wildly in challenge
Entertainment
Not worth it for the five-hour story mode alone, but if you’ve got friends or family who dig the concept, it’s a blast
Replay
Moderate 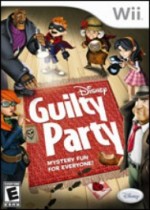