Black The Fall begins quietly with your unnamed protagonist, a humanoid worker with a giant antenna sticking out of his back, stealthily trying to escape some industrial factory. How did our protagonist get here? Is he a slave? Are he and his comrades human, or some combination of man and machine? The opening introduces a lot of questions that Black The Fall never bothers to answer, and that mystery is the high point of this puzzle-platformer. Unfortunately, the intrigue is soon swallowed by frustrating puzzles and a dull world.

Black The Fall shares more than a few similarities with Playdead’s titles Inside and Limbo. You’re constantly moving from one side of the screen to the other in 2.5D environments, navigating a surreal smattering of factories and barren landscapes while solving puzzles to guide the main character to salvation. The puzzles are numerous and small, with a quick death and respawn being your punishment if you fail. The environments and the escape from a cold, unfeeling industrial nightmare also take clear inspiration from Inside. However, Black The Fall is a strong example of how imitation on its own does not lead to greatness.

Black The Fall tells a wordless story by leading you through a surreal nightmare. It has political overtones, with communist symbols adorning various walls, but lacks a clear message and the surrealism is never engaging for long. While the aesthetic is lovely to look at, it isn’t a balm for the the dullness of this post-apocalyptic world. Many levels have you navigating pipes and sewers, and eventually the first half of the game bleeds together and the pieces become indistinct. Once you’re moving through outside environments, levels have more visual variety, but still not enough to make them exciting places to explore and take in. Thematically and visually, Black The Fall is a muddled experience that wants to say something concrete about its themes while also being annoyingly coy about the whole thing. Not to dive too much into spoilers, but even if I had found myself engaged with the story, the ending is abrupt and hollow and doesn’t pay off.

The puzzles are frustrating because they’re more like trial-and-error obstacles. I often came across situations that I immediately knew how to solve, but had to spend several attempts flopping about with my character battling the wonky physics. Some of them are just poorly designed, like one segment that has you navigating a trap-filled environment with only audio clues. Another requires you to contend with the physics of a raft to cross a lake. Even the best puzzles aren’t interesting – they’re just functional. I often felt like I was performing chores just to progress through a story that I had lost interest in hours ago.

The word I would best use to describe Black The Fall is perfunctory. It mostly functions, but has no highs outside of the opening. It offers no narrative incentive to deal with its onslaught of boring and outright bad puzzles. I rarely finish games that make me wish I could have the time I spent with them back; Black The Fall is an unfortunate exception. 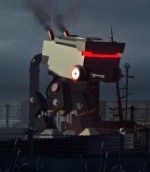 This puzzle-platformer doesn't rise up to the quality of its genre peers.

Purchase More Info
6
i
Game Informer's Review System
Concept Escape the cruelties of a sci-fi communist government in this puzzle/platforming adventure
Graphics Black The Fall’s gorgeous visuals are easily its strongest feature, bringing a grim world to life
Sound The electronica score has a few standout tracks, but is mostly forgettable. The sound design is frustrating, especially when audio-centric puzzles arise
Playability Awkward controls and janky character collision make many of Black The Fall’s puzzles more frustrating than they need to be
Entertainment Though Black The Fall’s presentation is beautiful, the combination of sluggish controls, trite puzzles, and a weak conclusion makes this journey a hard sell
Replay Low