The Batman mythos has had countless interpretations and retellings across various mediums since the character’s inception in 1939. Telltale’s series feels unique stacked up against the myriad stories of Bruce Wayne and his crusade to save the city of Gotham, and that is an achievement by itself. This interpretation of the Bat has had its ups and downs, with new villains and unexpected twists making it easy to look past an all-too-familiar formula of quick-time events and binary choices. Unfortunately, the finale lacks the potent plot punches of previous episodes and feels slipshod in comparison to the best episodes.

City of Light finds Bruce continuing the upswing he was on in Episode 4. After taking down Two Face, he squares off against the Penguin and the deadly Lady Arkham, characters who have been Telltale’s trump cards with this series. The Penguin, while hardly a new character, is presented as a sympathetic and wounded man, and we finally get to see the catalyst of those wounds. Lady Arkham is a menacing force with a dark past who may be the Bats' equal in wit and brawn.

The episode’s major problem is that every story beat is predictable, with Batman being ridiculously dumb during certain scenes for the sake of trying to build suspense that isn’t there. In one sequence, Bruce is trying to find a house where someone is being held hostage using scraps of data. After seeing literally any of the clues, the location is painfully clear – but players have to keep going for several minutes until the “world’s greatest detective” puts the pieces together. This happened multiple times during my playthrough, because it’s too clear from the get-go what everything is building toward.

City of Light has moments that shine, particularly those that focus on Lady Arkham’s motivations and Bruce’s friendships with Harvey, Alfred, Gordon, and Selina. However, the episode is so concerned with speeding toward the ending that we don’t get much time to focus on the characters. Instead, you’re plaything through poorly devised “investigation” scenes where you’re clicking around an environment trying to help poor dumb Bruce reconstruct a crime scene. Or, even worse, you’re pressing buttons to dodge enemy gunshots and fists in what are effectively cutscenes with minor interactivity shoehorned in.

Predictable, often boring, and finishing off with an abrupt ending – this episode disappointed me in many ways. However, I was also drawn in by the tragic relationships that arise out of Bruce’s dual lives as a billionaire and the Caped Crusader. Even though City of Light doesn’t make that the focal point of the episode (as the best episodes in the series have done), it still gives those elements enough time to make the experience entertaining. I won’t spoil anything, but the ending is strong enough that I hope Telltale takes another shot at the Bat and builds something off this sturdy foundation. 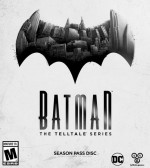 The finale to Telltale's take on Batman is a little disappointing but mostly solid.

Purchase More Info
7.25
i
Game Informer's Review System
Concept Square off against the Penguin and the dangerous Lady Arkham in this season finale
Graphics Weird animations hurt the great aesthetic Telltale has created
Sound City of Light is one of the quieter episodes in the series, but uses its sparse music well
Playability Like the other episodes, this one is easy to play for both hardcore and casual gamers
Entertainment The finale is an inconsistent episode, but its highs are memorable
Replay Low