Batman: The Enemy Within – Episode 4: What Ails You Review You ever have that one friend? Delightful one minute, and a rage-fueled monster the next? You like their company, but you’re never sure when they’re going to go off and reveal the Mr. Hyde that lurks within. The second season of Telltale’s Batman has been about being trapped in a room with this particular kind of person, and the fourth episode makes good on all the tension associated with that. This culmination results in not only the best episode in the series since Lady Arkham’s debut in the first season, but also one of the more compelling Batman/Joker relationship stories in years, in any media.

Last we left Bruce, he was trapped in a cold and deadly predicament. After escaping, he resumes his quest to bring down Harley Quinn and the rest of the villainous Pact, with the help of secret agent Avesta and John Doe (a.k.a. The Joker). Much of the episode revolved around just how much you trust Doe. Is he actually willing to help you? Or is he working behind your back to earn Harley’s affection? Regardless of intentions, Doe commits some horrific actions during the episode. However, he seems properly contrite and confused in the aftermath of them all. Is it all an act?

The foundation of Episode 4 is whether you can trust Doe as a friend, playing your own knowledge of Batman and Joker’s relationship throughout the years against the events of previous episodes. Telltale’s version of Gotham City follows its own logic, for better or worse, often recasting old favorites in new light and rearranging origin stories to make a world that stands in stark contrast to the rest of the Batman mythos.

Watching Telltale’s version of this classic dynamic come to a head in the final hour of What Ails You is enjoyable. I spent the majority of the episode wanting to guide Doe toward doing the right thing while also balancing that against what was right for Gotham. Familiar Telltale-brand problems rear their hydra heads more than a few times, like bad animation and a few tedious walk-around-the-room-and-look-at-things sequences, but the writing and tension prevalent through the episode is strong enough that those are easy to ignore this go round.

Rooting for The Joker as a likeable, sympathetic person is a strange, unexpected thing. And yet Telltale has accomplished that much with its season-long gambit. One more episode remains and I’m curious to see if Telltale will go all-in on letting players shape Joker as a character. Regardless of how the finale plays it, I’ve thoroughly enjoyed the journey of trying to rehabilitate one of comic’s greatest villains.

8
About Game Informer's review system
Concept
Bring Bruce Wayne’s relationship with the Joker to its most dramatic point
Graphics
Animations are still stiff, but Batman is easily the best-looking Telltale title
Sound
Ominous but serviceable piano tunes dominate this episode
Playability
This episode has fewer tedious investigate-the-room segments, which makes it stronger and more playable
Entertainment
What Ails You serves as the payoff to the slow burn that has been this season so far, and it’s an satisfying one
Replay
Moderately Low 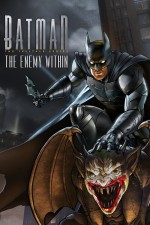 Batman: The Enemy Within – Episode 4: What Ails You