Batman: The Enemy Within – Episode 2: The Pact The first episode of Telltale’s new season of Batman left a lot to be desired, since it failed to build upon what made the first season so interesting: unexpected twists to characters fans have adored for decades. While the first season gave us a charming, absolutely mad dandy as The Penguin, now The Riddler has become an uninteresting serial killer who relies on brutal violence instead of intriguing mind games. The second episode fares better than the first, delivering an intriguing and entertaining story about the Caped Crusader’s alliances being tested, but still has a lot of issues, particularly when it comes to plot contrivances and pacing.

The Pact kicks off immediately after the shocking events of the first episode, with Batman, Commissioner Gordon, and the mysterious Amanda Waller teaming up to take on a series of explosions and robberies that have rocked Gotham City. The alliance is strained, with both Gordon and Waller being their own respective brands of control freak, so you’re often forced to side with one or the other when it comes to questions like “who do I call for help in a desperate situation?” Since we’re only two episodes deep, we don’t know how this mechanic will turn out, but I did feel mildly guilty whenever I had to choose Waller over Gordon for the sake of pragmatism.

The biggest introduction in this episode is the rest of the rogues allied with The Riddler. In the first episode, this gang was alluded to, but we never got to see their faces outside of The Joker (“John Doe”). Now Harley Quinn also shows up – the sole interesting character twist in the whole episode. She’s the ringleader of the group and (for once) has total control over Joker, often bullying him and manipulating him for her own ends. I won’t say who fills out the rest of the gang, but if you’ve absorbed any amount of Batman media over the past few years, you’ll recognize all of them. The gang is The Pact’s biggest draw and its biggest flaw. The episode feels overstuffed, constantly introducing new threads and foes. It never takes a second to slow down, allow characters room to breathe (outside of The Joker and Harley’s interactions), or develop satisfying answers to why the story goes where it does. One of the biggest plot points in The Pact requires Batman to infiltrate the group as Bruce Wayne. Why would Bruce Wayne do this? Why would these villains accept the rich billionaire into the gang in the first place? The Pact offers answers to all of these questions, and those answers are hysterically dumb. This requirement for a huge suspension of disbelief on the part of the player has slowly been a growing problem over the entirety of the series, with Telltale’s Gotham often going to ludicrous lengths to not see that Bruce Wayne is Batman – especially when nearly every situation you encounter as Bruce allows you to punch your way out of it.

In spite of grappling with the plot holes and lackluster character motivations, I still took joy in a number of moments peppered throughout the episode. All of Batman and Waller’s interactions are fun to watch as their philosophies regarding justice are constantly colliding, and a certain scene in a car delivers both suspense and laughs. Some of the quick-time event action sequences (always the most abysmal sections of Telltale games) are enjoyable, even if they embrace slow motion too much.

Ultimately, I finished The Pact with a keen interest in where the series is going in spite of the plot and pacing issues. I’m particularly curious to see how both the loyalty mechanic plays out over the next three episodes as well as Bruce’s relationship with the Joker, which the series keeps taking in unexpected directions. The first two episodes have primarily been set-up, and a lot of it, so I’m hoping the next one makes that investment pay off and delivers the goods. 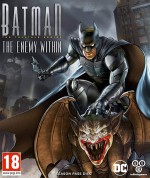 Batman: The Enemy Within – Episode 2: The Pact

The second episode of the new season is much more enjoyable than the first...if you're willing to suspend your disbelief

Purchase More Info
7
i
Game Informer's Review System
Concept Take on a new gathering of rogues and manage Batman’s alliances carefully as a massive threat looms over Gotham City once again
Graphics Batman continues to be Telltale’s most visually impressive work, but the animations are still hilariously bad
Sound The guitar-driven soundtrack is functional but ultimately forgettable
Playability Quick-time events galore and some interact-with-objects sections make The Pact just as easy to play as every other Telltale game
Entertainment The Pact weaves a convoluted story that’s an improvement over the first episode and ultimately entertaining if you’re willing to suspend your disbelief.
Replay Moderately Low