If you’ve watched any of Sony Pictures Entertainment’s marketing for its upcoming Uncharted movie, then you’re likely aware that it has its own take on the infamous cargo plane scene from the third installment of the video game series.

In one of the highlights of Uncharted 3: Drake’s Deception, protagonist Nathan Drake attempts to crawl from one cargo piece to the next, back to the safety of a plane. Things don’t end well for him as the plane comes to a fiery crash, leaving Drake stranded in a desert. Sony’s upcoming Uncharted movie, which stars Tom Holland as Drake and Mark Wahlberg as mentor and right-hand man Victor “Sully” Sullivan, features a very similar cinematic, and after being teased throughout multiple trailers, the full sequence has been released.

As you can see in the extended scene above, this movie features the whole “shootout in the plane before there’s a shootout and parkour section on the dangling cargo,” just like Uncharted 3. However, the movie has its own twist on the event in that it doesn’t seem like the plane is going to burn in a fiery crash landing toward Earth. Instead, we see Chloe Frazer, played by Sophia Taylor Ali, accelerate a car toward an antagonist in the plane.

Unfortunately, that car is then seen heading straight for Drake just as he finally makes it back to the plane and naturally, it knocks him right back out into the air…and that’s where the clip ends. Here, Drake appears to be over more of a watery location – perhaps tropical – rather than a desert so it seems like the similarities to Drake’s Deception might end right at the end of this scene. We’ll find out when Uncharted hits theaters exclusively on February 18.

Check out the latest trailer, which reveals Sully’s signature mustache for more, and then read up on the upcoming Uncharted: Legacy of Thieves Collection releasing this month. It features PlayStation 5 versions of Uncharted 4: A Thief’s End and Uncharted: The Lost Legacy, and anyone who purchases it before February 3 will receive a voucher code for one standard ticket to see the Uncharted movie in theaters.

Are you excited for this Uncharted movie? Let us know in the comments below! 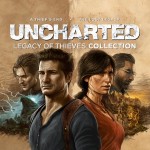