Mass Effect Is Crossing Over With No Man's Sky

It's always fun to see game developers that clearly appreciate each other's work come together for a fun crossover event. To celebrate the release of Mass Effect Legendary Edition, Hello Games is adding Mass Effect's SSV Normandy SR1 to No Man's Sky.

Over the last week, Hello Games has led its community on a journey to unearth a new secret tied to an object called the Historiographical Dosimeter. Today, the community will see their expedition leads to the Normandy. The ship looks fantastic, and you have to assume Commander Shepard and crew are inside of it.

If you want to see this majestic ship (and add it to your fleet for good), time is of the essence. The crossover event ends on May 31. That's right, you only have 10 days to finish the mission. For whatever reason, events of this ilk never last long. The same thing happened with Assassin's Creed in Final Fantasy XV, and The Predator in Ghost Recon Wildlands. 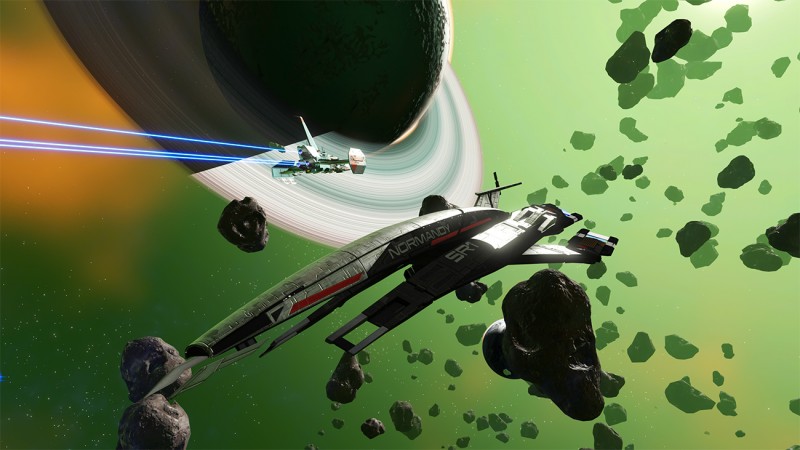 Hello Games' Sean Murray outlined his excitement for the crossover in a written letter to the community. "We are thrilled and flattered that Bioware and EA let us pay tribute in this way. As huge fans of the series, it’s a lovely moment for sci-fi fans. It comes at such an exciting time for Mass Effect, with so many people discovering and rediscovering this amazing universe through the release of the Mass Effect Legendary Edition."

Hello Games says more surprises are on the way in the near future, all tied to No Man's Sky's fifth anniversary. Could other licensed crossovers be on the way? Star Wars or Star Trek would be amazing additions, but too many pop culture nods could steal away from the artistic vision Hello Games has worked hard to establish. Regardless, this is a hell of a surprise, and the Normandy fits right in with No Man's Sky's designs.