Pokémon Day, which takes place annually on February 27 to celebrate the Japanese release of Pokémon Red & Green, promises to be a big one thanks to this year marking the 25th anniversary of the series' launch. We've already seen the logo celebrating the major milestone for the monster-collection franchise and knew that pop superstar Katy Perry would be a part of the celebration, but today The Pokémon Company announced another free virtual performance starring rapper and singer Post Malone.

The concert is set to happen on the Pokémon YouTube, Twitch, and website on February 27 at 4 p.m. Pacific / 7 p.m. Eastern. In addition to the performance by Post Malone, The Pokémon Company also teases that fans will want to stick around until the end of the show to learn about more collaborations and surprises.

You can check out the official Post Malone concert poster below. 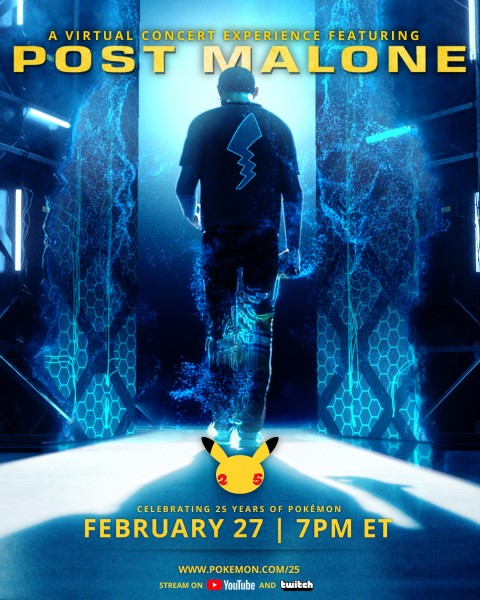 If you're unable to make the virtual concert, the day leading up to the event promises various celebratory activities and events happening across Pokémon Sword & Shield, Pokémon Go, and the Pokémon animated series. It would also be somewhat surprising if we didn't get additional information on what's next for the franchise, as well as additional information on New Pokémon Snap. On past Pokémon Days, we've seen everything from first looks at Pokémon Sword & Shield and launches of classic games on then-modern platforms to even the release of a remake of the original Pokémon theatrical film on Netflix and Snapchat filters.

Are you impressed with how Pokémon is seemingly pulling out all the stops for its 25th anniversary celebration? What would you like to see on Pokémon Day?