New Mortal Kombat 11: Ultimate Kollector's Edition Features Sub-Zero Mask, But Only For Some

NetherRealm and Warner Bros. Studios has confirmed that a Mortal Kombat 11: Ultimate Edition is on the way and it will include the three new fighters revealed with Mileena, Rambo, and Rain. Also confirmed is a sweet new collector's (kollector's*) edition with a Sub-Zero mask that looks stunning. The bad news? It's only for the EU.

Warner Bros. tells Game Informer that the below Sub-Zero edition will only be available in the EU and will not be making its way over to the Americas. While sad, because it really does look incredible, it is nice to see Sub get some more love, especially with how incredible the vanilla game's collector's edition was. 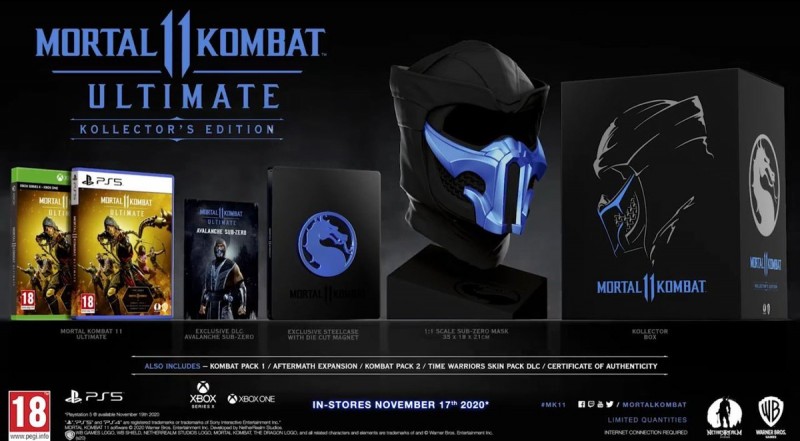 For those in the EU, or for those that are planning to import, it comes with a 1:1 scale Sub-Zero Mask, a steelcase, exclusive Avalanche Sub-Zero DLC, and the Mortal Kombat 11: Ultimate game package as well. Ultimate comes with the following:

The Mortal Kombat 11: Ultimate edition will also allow for free PS5 and Xbox Series X upgrades, for those that don't want to buy it for two different systems.

Mortal Kombat 11: Ultimate arrives on PlayStation 5, PlayStation 4, Xbox Series X/S, Xbox One, PC, Nintendo Switch, and Google Stadia on November 17. Thoughts on the latest reveal and the above 'Kollector's' edition? Still holding out for your dream DLC pick? Sound off in the comment section below with what you'd like to see next!