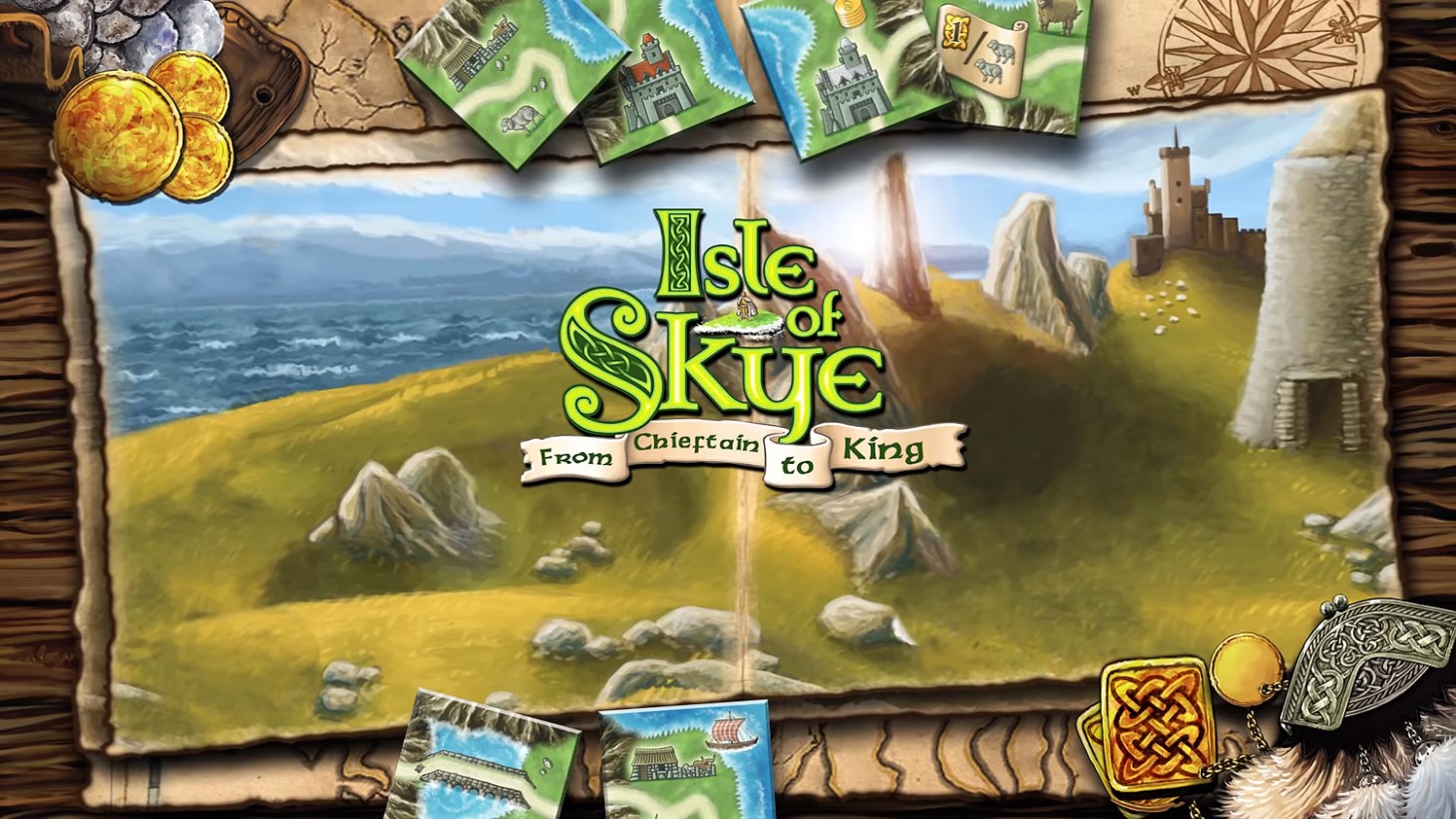 Few board games are more popular or prolific than Carcassonne, the family-friendly tile-laying classic from 2000 that tasks players with building a communal countryside, one colorful square at a time. While not officially related, Isle of Skye feels like an evolution of Carcassonne's theme and mechanics, giving players a meatier experience that’s loaded with replayability and perfectly suited for mobile gaming. 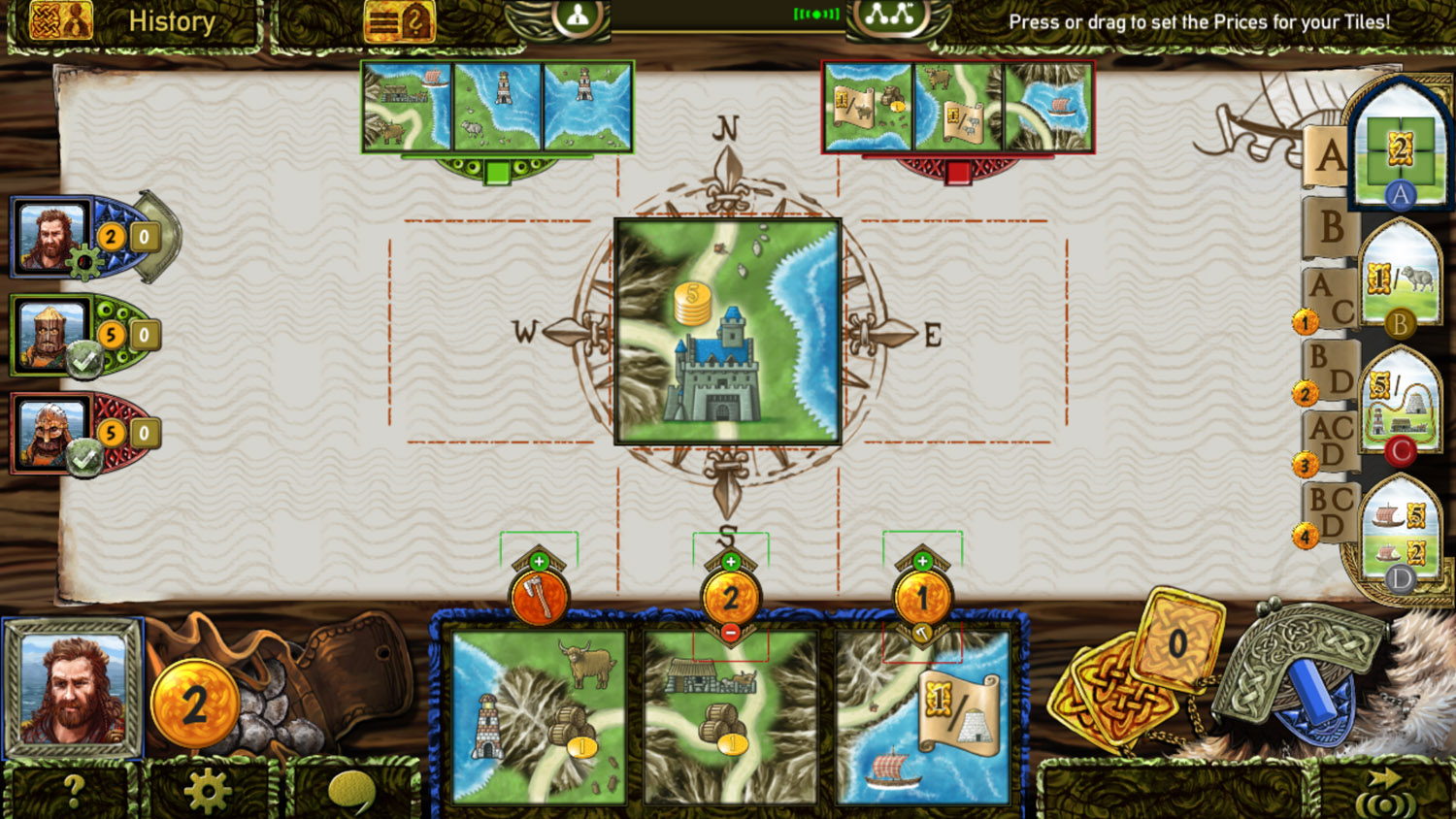 As with Carcassonne, your goal in Isle of Skye is to build a kingdom by laying down tiles comprised of different regions – in this case, the lakes, mountains, and grassy plains that make up the real Scottish island. Each tile you place must match up with the regions of its orthogonal neighbors, and may contain a variety of different livestock, buildings, and ships that factor into Isle of Skye’s unique scoring system. Barrel symbols are a notable exception, and will grant you more gold each turn – but only if they lead back to your city via an uninterrupted road. Unlike Carcassonne, each player is building their own kingdom in Isle of Skye, but there’s still plenty of interaction thanks to how tiles are chosen in the first place.

At the beginning of every round, each player receives three landscape tiles, and will secretly choose one to discard, and place bids on the other two. Those bids set the prices that other players can buy them for on their turn – you can purchase exactly one tile from another opponent. If no one wants to pay the prices you set, you’re on the hook for them yourself, and pay the money you set aside for the bid in the first place.

All of these discard and pricing decisions are made secretly and introduce a wealth of interesting choices. Do you set a high price on a valuable tile in hopes of retaining it for yourself? Or push your luck with a lower price and hope no one takes it? Do you discard a tile that would be beneficial to an opponent, or set a high price in hopes of scoring some extra money, which you can in turn use to buy more valuable tiles from your competitors? But what if that tile you're eyeing is the one your opponent is planning to discard anyway? 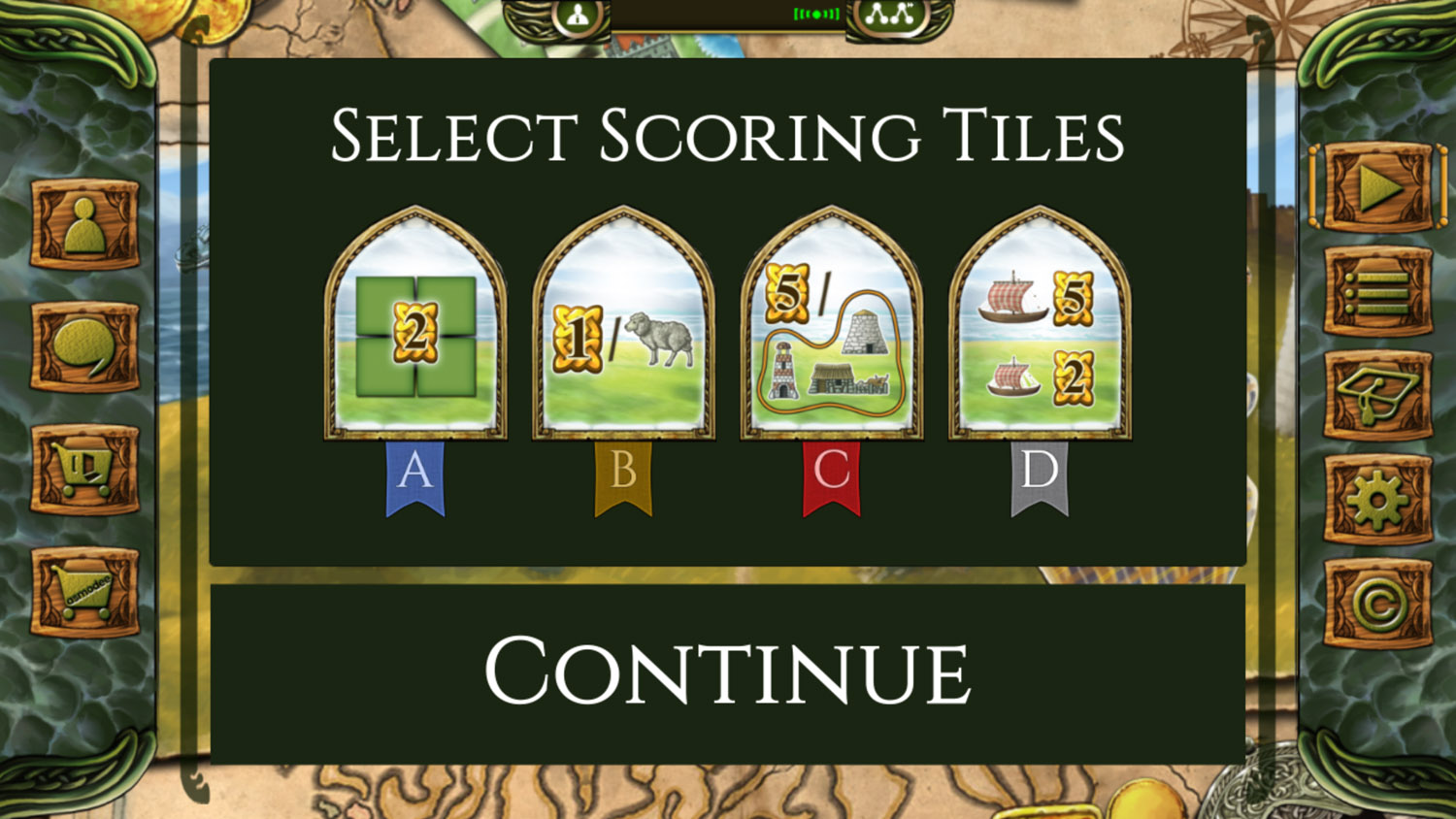 Ultimately, the value of any given tile comes down to its scoring potential, and that’s where Isle of Skye really gets interesting. At the beginning of the game, four scoring tiles are randomly chosen out of a pool of 16 options. These will award points for a variety of different criteria, like one VP for every sheep in your kingdom, or five VP for the person with the most ships, or two VP for every completed mountain area. Each score tile is triggered exactly three times during the game, but their timing is staggered throughout each of the six rounds; only tile A scores in the first round, but B and D score together in the fourth round, and A, C, and D all score in the fifth round, etc.

Besides adding a boatload of variety and replayability to Isle of Skye, this scoring format also introduces interesting pressures that twist your strategy from turn to turn – “If I get one more ship tile I’ll have the majority, but I need to get it NOW before it scores. Or maybe I’ll focus on those two cow tiles instead – I don’t have a road tile to connect them back to my kingdom, but I’ve got another round before their score tile comes up to figure that out…” Devising a way to capitalize on the natural ebb and flow of the score tiles and rake in a massive pile of points at the right time is supremely satisfying. 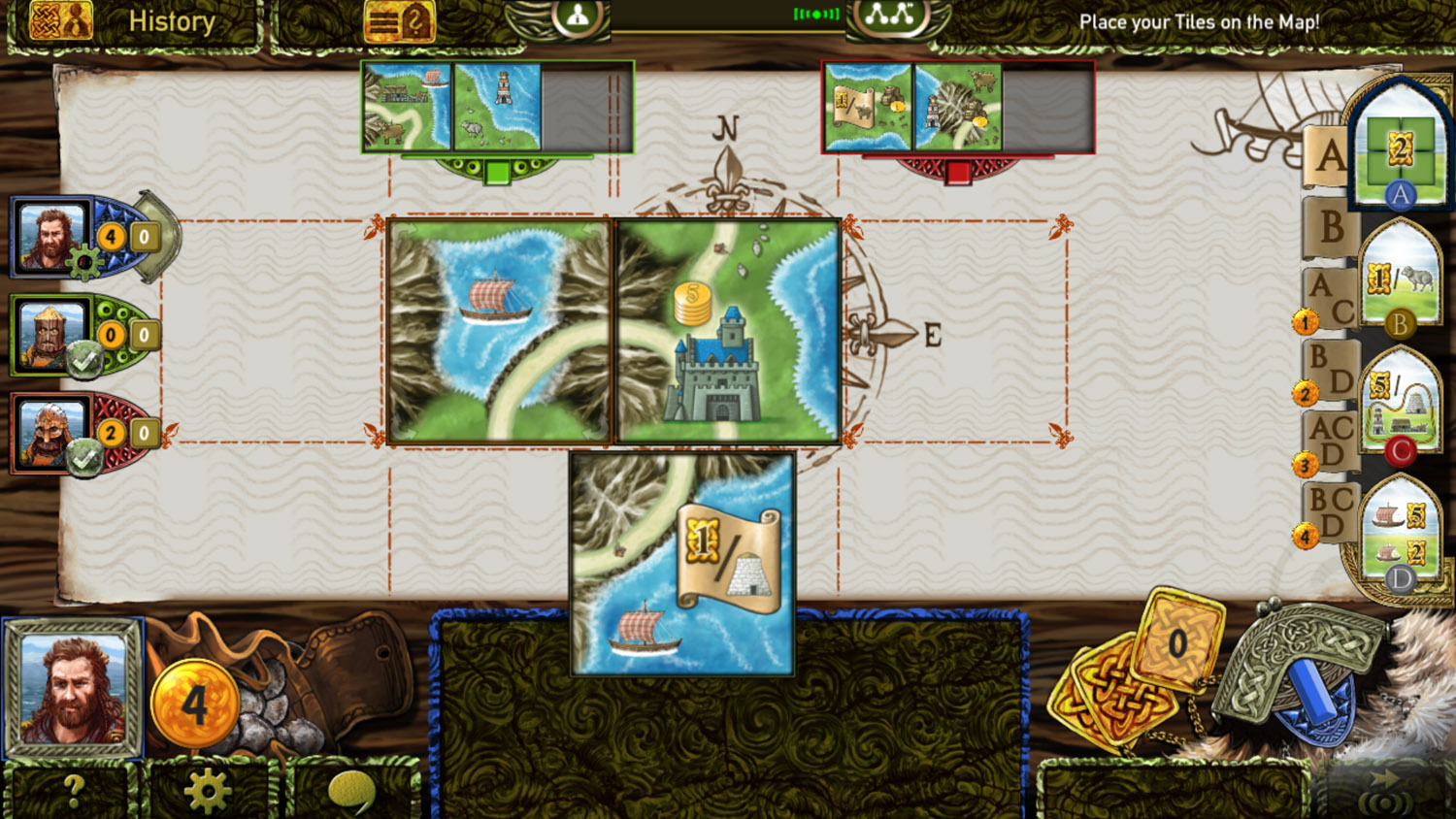 Finally, some land tiles offer their own bonus scoring opportunities that only trigger at the end of the game. Not only do these tiles add one last dash of variability to every game, they also ensure an exciting finale as you tally up the endgame points. Whether Isle of Skye will have the lasting popularity of Carcassonne remains to be seen, but it certainly has enough depth and variety to keep matches feeling fresh for years to come.

Like all of the games highlighted in this series, Isle of Skye greatly benefits from its transition to the digital table. In addition to a shorter playing time, A.I. opponents, and automated scoring, the digital version also boasts a wonderful aesthetic improvement over the physical game; when you rotate a tile to fit into your kingdom, its symbols automatically realign themselves – no longer will your ships be sailing upside-down or your sheep be standing sideways like some strange M.C. Escher landscape. Like Digidiced’s other titles, a humorous tutorial explains the ins and outs of the rules, and detailed explanations of scoring tiles are always a tap away. The touch controls make moving and rotating tiles and setting your bids a cinch, and the end-turn prompt ensures you always have the opportunity to undo potential mistakes anyway. 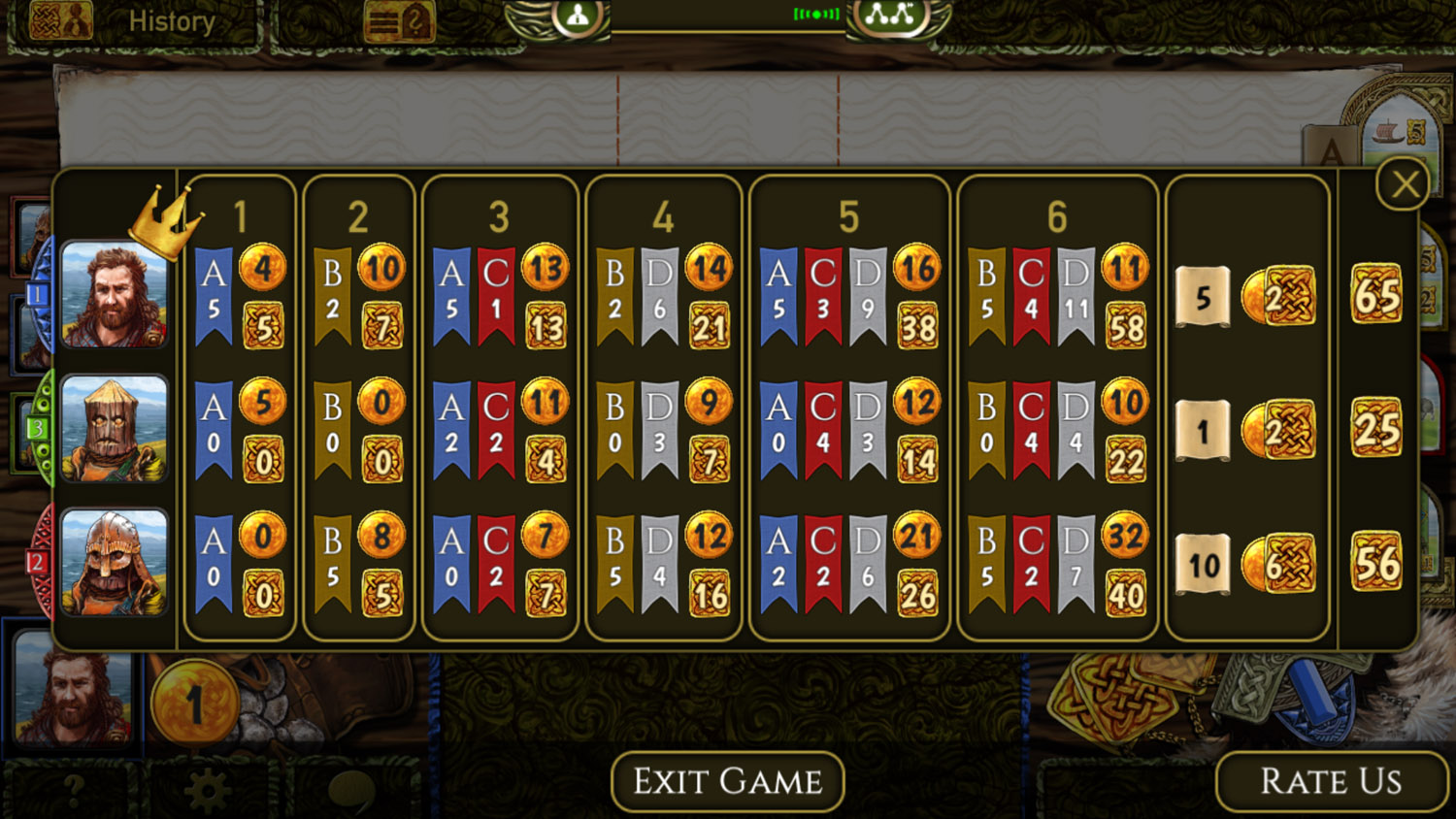 Isle of Skye’s multiplayer offerings are also consistent with Digidiced’s other titles, in that they provide a wealth of options that are all underused by the community. The local pass-and-play option seems viable for two players as there’s not a ton of hidden information to worry about in the game, but any more human players would simply be cumbersome. You won’t find many opponents for the asynchronous or real-time multiplayer modes, so wrangling your own friends up for online play is still your best bet.

While, I’ve thoroughly enjoyed thinking my way through Isle of Skye’s strategic tile-laying action, if you’re looking for something easier and breezier, you may want to check out its spiritual predecessor. Asmodee Digital’s topnotch Android port of Carcassonne features exceptional visuals, streamlined play, and a number of extra expansions for purchase if you find yourself enamored with the base game. It’s also one of the few digital board games with an active player base on Android, if you’re hankering for some human competition. A word of warning that a different developer owns the rights to Carcassonne on iOS, however, so Apple owners are out of luck – but Switch and PC versions are also available.

For more digital board games that are worth your time, check out my write-up of the fast and fun card trading of Jaipur, and the streamlined but strategic auctions of Stockpile. For physical board game recommendations, check out Matt Miller's bi-weekly column, Top of the Table.