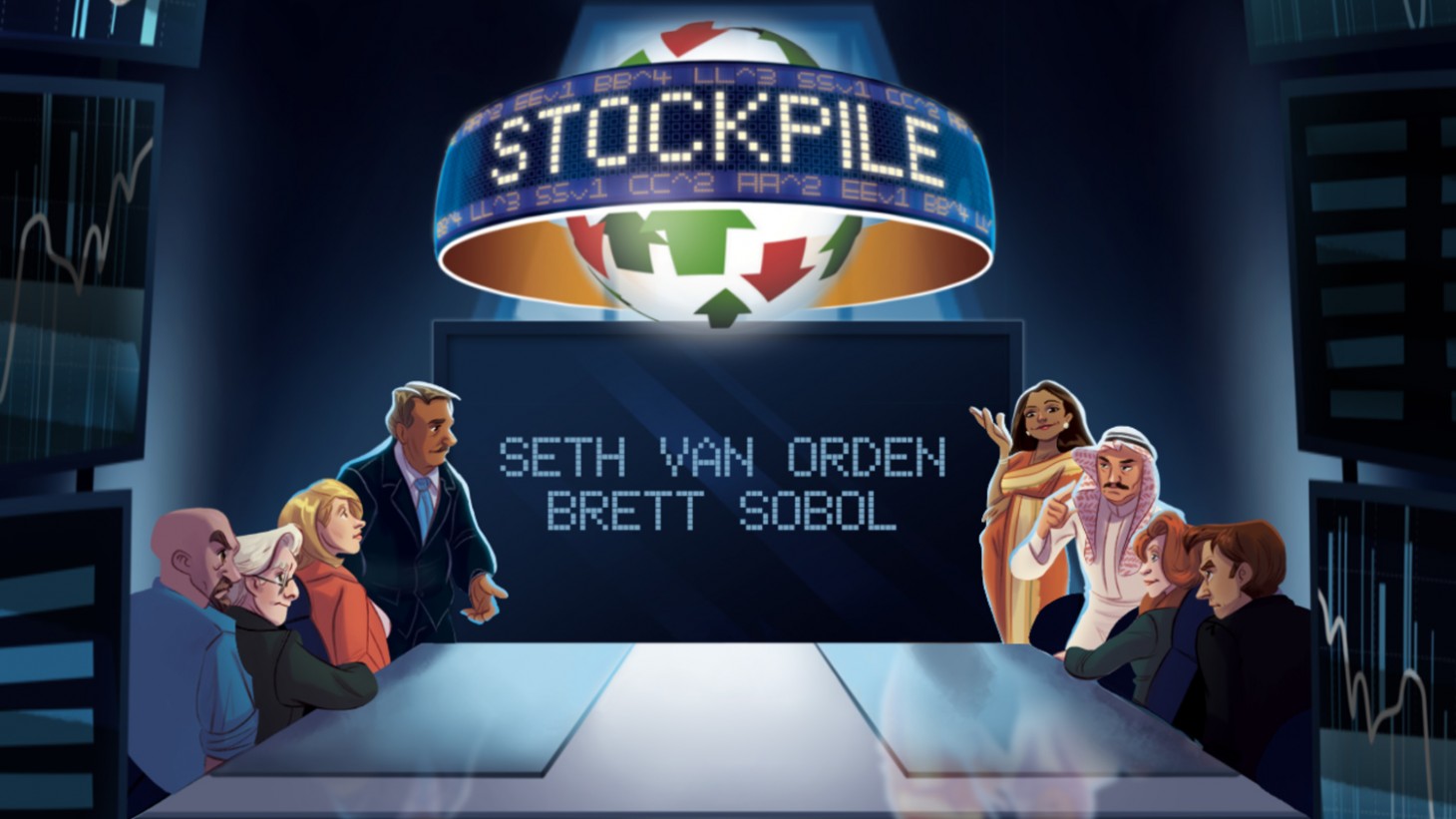 Depending on your penchant for haggling and shrewd calculation, auction-based board games can feel slow and dry, and the same is doubly true for stock market games. Stockpile eschews these problems thanks to some clever twists on the familiar mechanics, resulting in fast and engaging day trading that plays out great on mobile. 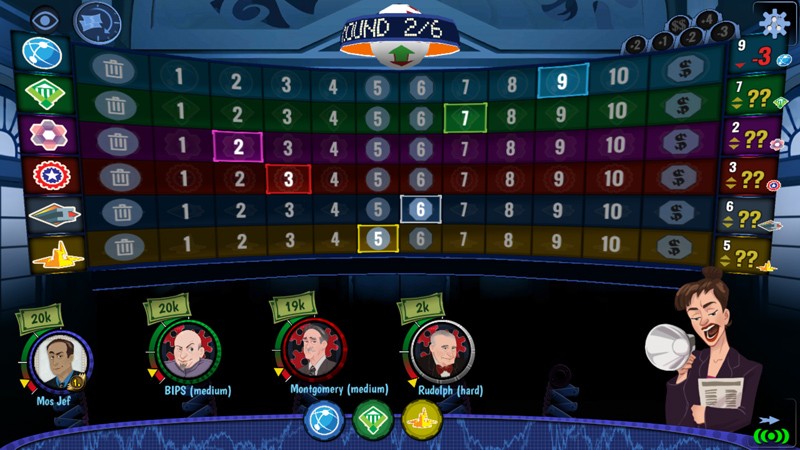 As you might’ve guessed, Stockpile revolves around buying and selling shares from a virtual stock market with the goal of making more money than all of your opponents. Players can invest in six different companies, each represented by its own ten-point scale on the main board. Whatever number a stock is currently at is how much money you’ll make for selling a corresponding share (in thousands). So far, so normal. 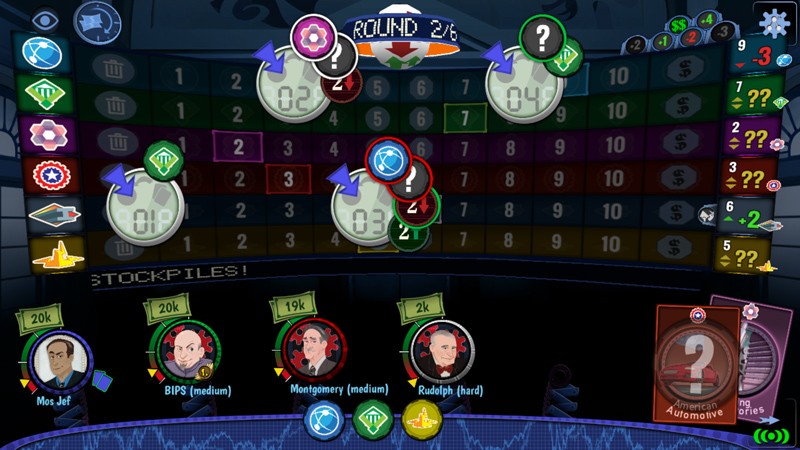 Where Stockpile gets interesting (and deviates from real life) is that you don’t actually buy stocks at this price – instead, stocks are auctioned off at the beginning of each round. First, each player is dealt two cards, which could be shares in the different stocks, a Boom or Bust card that allows you to change a company’s value by two points, or a trading fee that will cost the auction winner extra money. Players take turns playing their cards – one face down, one face up – into piles equal to the number of players, which will then be auctioned off. Each pile also starts with one random card, and you can only win one pile each round, so everyone is guaranteed to at least get something – even if it’s only a trading fee or a stinker of a stock.

This format introduces a number of intriguing choices. Do you play a good share you were dealt into a pile with other valuable stocks, and then hope you can outbid your competitors? Or do you sneak it into a mediocre pile face down and hope no one else bids on it? Should you play both your cards into the same pile, or spread them around? Can you bluff players away from a pile by placing a trading fee card into it? Or do you play the fee card face down in a popular pile in order to penalize whoever bids on it? Do you forgo valuable shares and aim for Boom tokens to boost a stock you already own? Or chase that Bust token to devalue the stock an opponent is flush with? 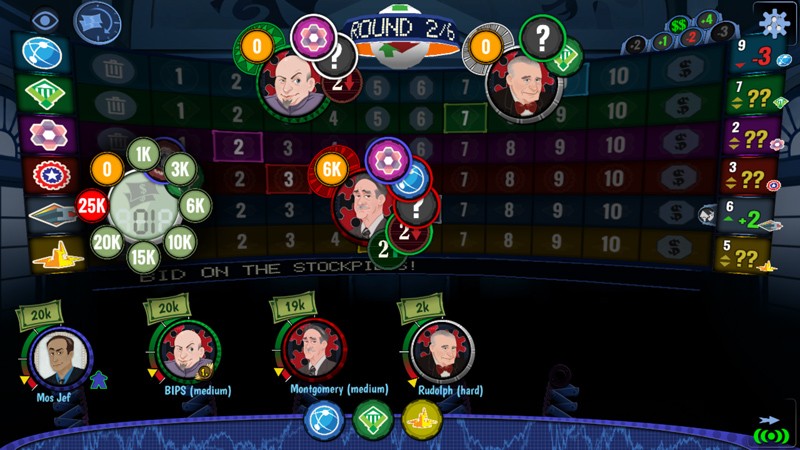 By allowing players to collectively form the piles they’ll be bidding on, Stockpile is already more intriguing than other auction games – and the bidding mechanism itself keeps things moving swiftly. Instead of hemming and hawing over what specific price to bid (a mechanic that can be alienating to some players), the prices in Stockpile are always fixed: You simply choose your pile and select one of the preset bidding numbers on the wheel (see the left circle in the above image). Those who are outbid are free to up the ante yet again, or pursue another pile – and because the piles are equal to the number of players, there will always be a free option. This streamlined approach lets you focus less on the bids and more on the myriad decisions you have to weigh each turn. 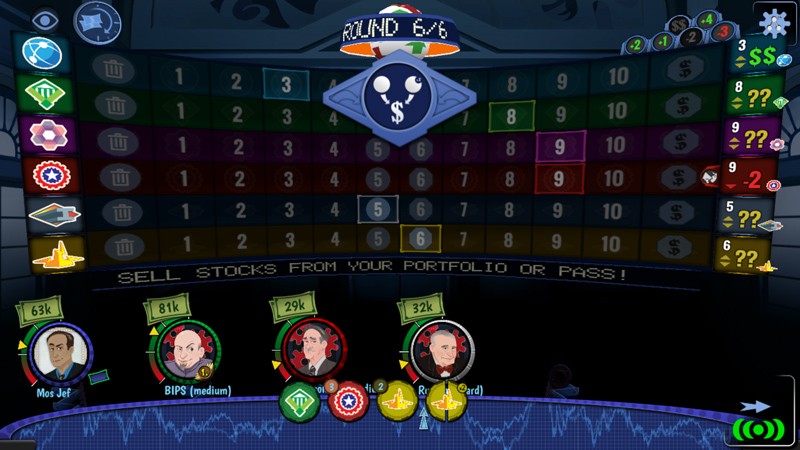 At the heart of those decisions is the upcoming forecast. During a round, each stock will either move up or down by certain number of points (seen in the upper right corner of the above screen shot), or pay a cash dividend to its shareholders. One stock change is publicly revealed to all at the beginning of the round, and each player privately learns a second change – don’t worry, the SEC won’t bust you for insider trading.

This info becomes crucial in both the auction phase and the optional selling phase that follows, and it doesn’t happen in a vacuum; paying attention to what stocks your opponents are overbidding for (or maybe they aren't?!) or selling off may give you a hint of what’s to come (if they’re not bluffing you). While some of the mechanics like the auction phase are fairly abstract, Stockpile does a great job of mimicking the calculated risk of market trading – you never know exactly what's going to happen, but if you analyze the board and read the tea leaves of public opinion (i.e. pay attention to what your opponents are doing!), you'll probably come out ahead. Just like the real stock market, you are essentially gambling – but it doesn't feel like you're gambling. 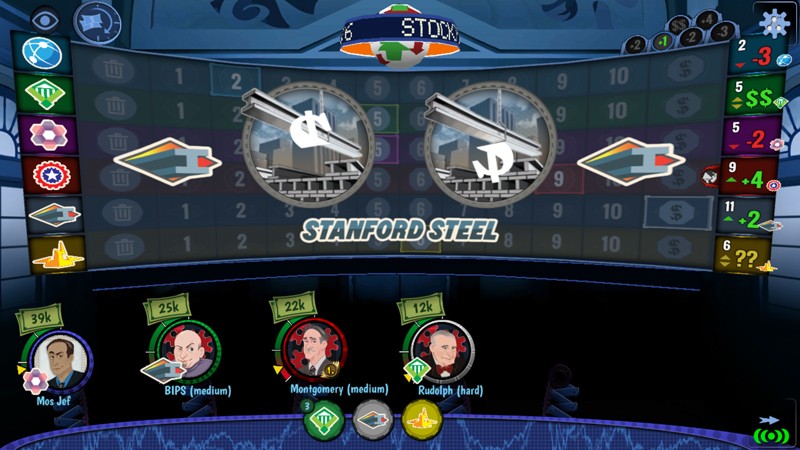 If a stock rises above 10, it will split, doubling your shares. If it drops below zero, you lose your shares...and your retirement fund.

All of these mechanics make Stockpile more exciting than a stock board game has any right to be. Having limited (but valuable!) knowledge about the changes to come pits you against your friends during every step of the gameplay, from how you seed the auction piles, to how you bid, and what shares you may or may not sell off before the upcoming changes. Everything culminates with a final liquidation at the end of the game, where players receive cash bonuses for majority control of each stock, and then cash out all their shares. It’s still a lot of number tallying to end on, but with the winner hanging in the balance, you don't have to be an accountant to get excited.

Stockpile has been delighting tabletop gamers since its physical release in 2015, and Digidiced’s digital adaptation only accentuates the game's strengths. A.I. players of varying difficulties make their decisions instantaneously, and the automated dealing and scorekeeping shrink playing time from 45 minutes down into the 15-20 minute range. Everything is clearly conveyed, and you can check a full history of previous actions at anytime if you miss what stock your opponent just purged from their portfolio. Even better, the app includes the Continuing Corruption expansion for free, which adds four additional modules that you can mix and match for a more complicated game. An advanced market board is also available, which transforms the uniform 10-point value scales in the base game into unique scales of different sizes and values (see below). There is plenty to chew on here, but even the base game remains highly replayable thanks to Stockpile’s inherent variability and the intriguing decisions it elicits each turn. 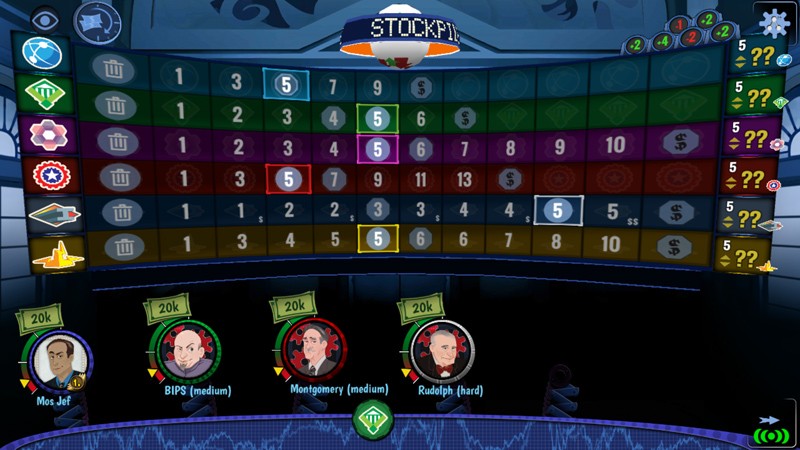 Digidiced has one of the most advanced setups for multiplayer board games on mobile, but the functionality remains underused by its player base – I had trouble finding online matches for live and asynchronous play on Android, though your mileage may vary. You can also set up casual games online with friends, if you can get a few buddies to go through the hassle of creating their own accounts. A local pass-and-play option is also available, but even though it does a decent job shielding your hidden info from other players (via a prompt the next player has to click through), the amount and frequency of switching between players makes it too cumbersome to be a viable option – if you’ve got a group of friends together in real life, you’re better off playing an actual tabletop game.

For those looking to pass the time with a little solo play, however, I've been delighted with how much game Stockpile offers in such a short amount of time, making it an easy investment to recommend.

For more digital board games that are worth your time, check out my write-up of the fun and breezy card game, Jaipur. For physical board game recommendations, check out Matt Miller's bi-weekly column, Top of the Table.