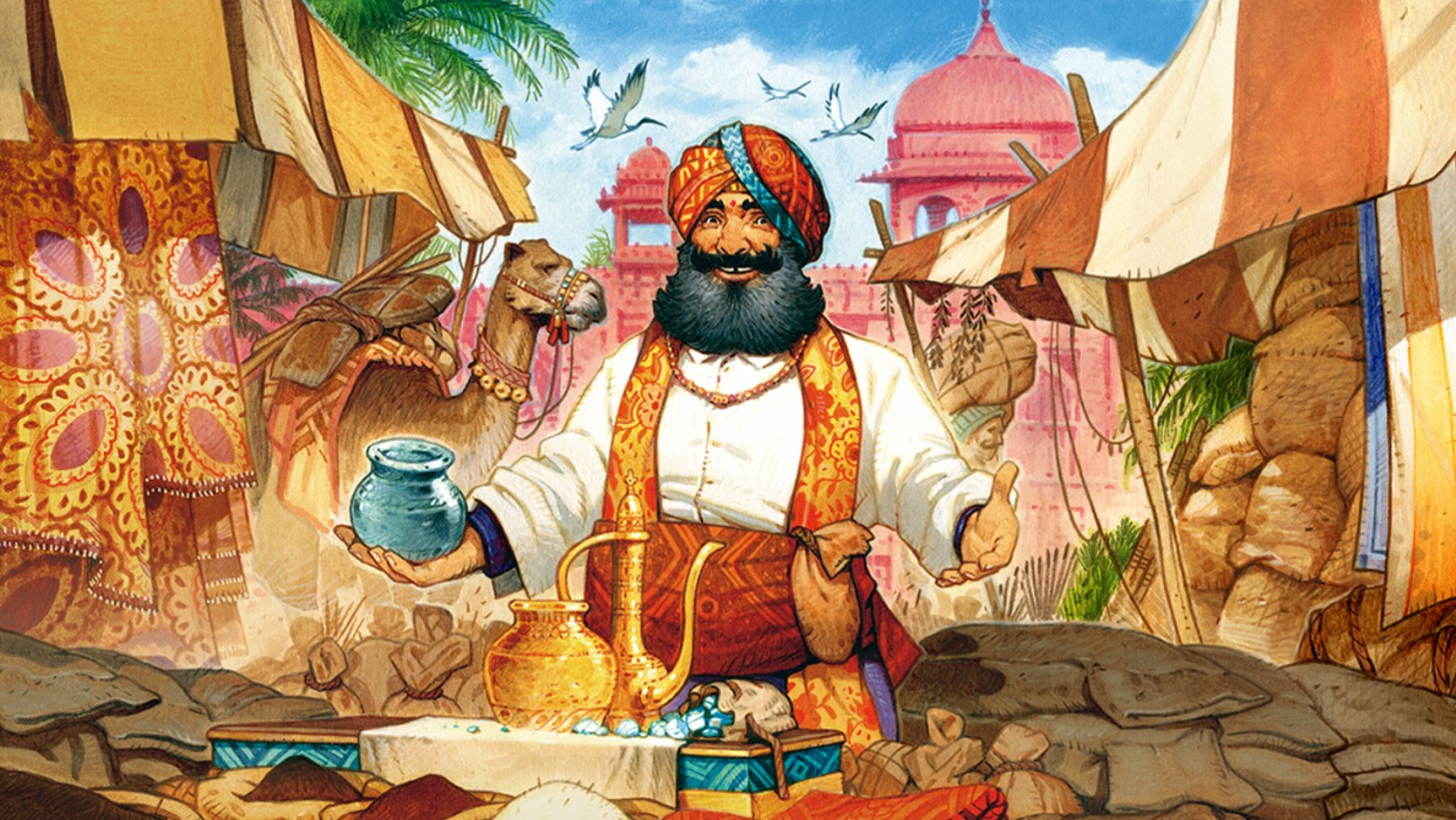 If you’re like me, you’re probably always on the lookout for a fun new mobile game to pass the time – and probably also frequently frustrated by the predatory free-to-play mechanics that plague them. Most of my visits to the Google Play Store begin with me excitedly downloading a dozen promising games, and end with me rage-uninstalling them as soon as I hit their inevitable free-to-play paywalls.

A few months ago, however, my love of tabletop games led to an exciting discovery: Board game publishers are embracing the mobile format in full force, offering up fun and endlessly replayable digital translations of their best games. Even better, most of these apps adhere to the old-school pricing model that the majority of us prefer – you simply pay one upfront price, and then play to your heart’s content without any time-gates, premium currencies, or ads ruining the fun.

Since then I’ve been playing every digital board game I can get my fingers on, and I’ll be highlighting my favorites in this ongoing series. If you’re looking for your next mobile fix, look no further. 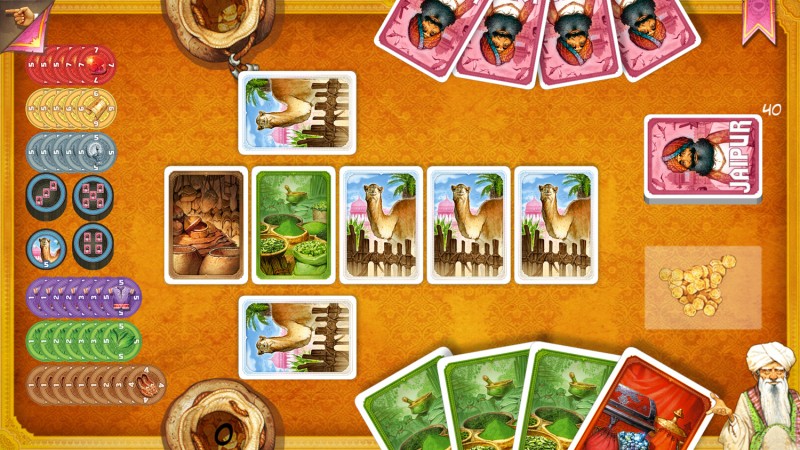 Most of the time if I’m playing a game on my phone it’s because I have a few minutes to kill, and as such I tend to favor short and simple experiences over hours-long strategy fests. Jaipur fits the bill on both accounts, offering two players a quick and straightforward take on set collection. However, Jaipur also contains enough wrinkles to keep me playing for hours on end – go figure!

Gameplay in Jaipur is simple: Players sit on opposite sides of a virtual table taking and trading cards with the face-up row in the middle. Each card represents either one of six different goods (ranging from leather to jewels) or a camel. On your turn, you can either take one card from the main row, take several cards in exchange for cards from your hand, take ALL the face-up camel cards (they travel in caravans, you know), or sell one or more goods of the same type from your hand for victory point tokens. And that’s it! Each player does their one action, back and forth, trading and selling goods for points until the game is over. 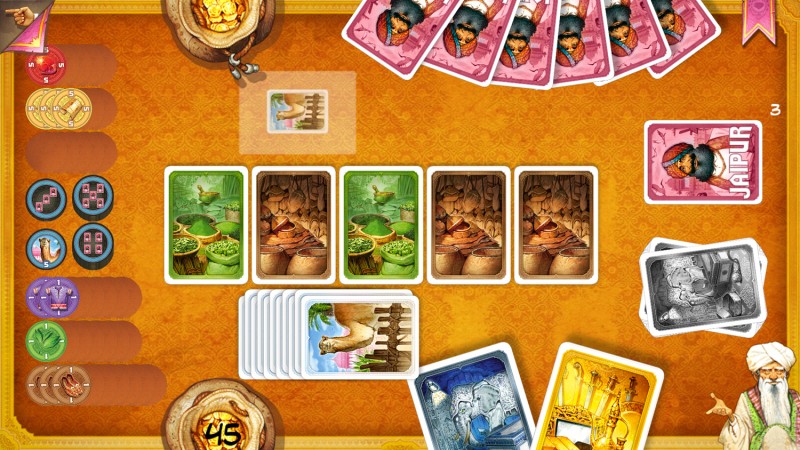 A round ends when three token piles are depleted, so deciding when to cash in goods or hold out for more can get tricky.

If you’re wondering what about this is particularly interesting, much of the answer lies in the scoring. Each type of good has its own pile of victory point tokens, and the rarer the good, the more points its tokens are worth. However, the points for a given good can vary as well, and selling early will net you the more lucrative rewards. Then there are the bonus tokens – selling 3, 4, or 5 goods at a time will get you a bonus token containing a random number of VPs, which your opponent won’t see until the end of the match. A dedicated camel token also gives five more VPs to the player with the biggest caravan at the end of the game, so while you can use camels as a wild card when trading for goods, you’ll want to keep enough to stay competitive.

While the decision you’re making on any given turn is simple enough, these scoring intricacies offer a number of interesting considerations. Do you compete with your opponent for every expensive good that comes up, or scoop up the more abundant wares that tend to clog up the main row? Do you cash in early for the higher-priced tokens, or save them up and take a chance on a random bonus? And what about those darned camels? Is grabbing a big stack of them worth giving your opponent first dibs on whatever goods replace them in the main row? While you have plenty to think about, none of these considerations prevent matches from moving along at a brisk pace – and thanks to the app automating all of the card dealing and scoring, a victor will be declared in a matter of minutes. 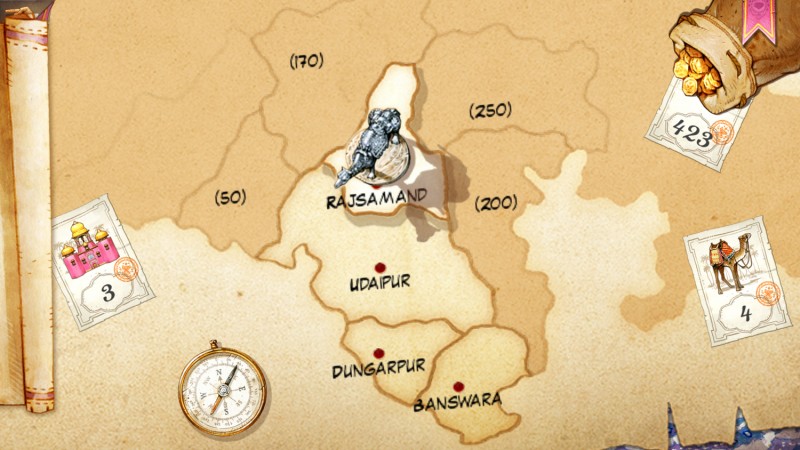 Jaipur's campaign has you traveling to different markets across India, which offer different gameplay variants.

I tend to prefer single-player experiences when I play mobile games, and Jaipur shines in this regard – not only does it feature A.I. with variable difficulty levels, it also contains a lengthy campaign that introduces new variants to keep things fresh. You’ll also earn money as you play through it, which you can use to build a virtual palace out of individual components. The palace doesn’t actually do anything mind you, but it offers a sense of meta-progression if you’re willing to deal with the finicky controls for placing structures – and if you’re not, it’s real easy to ignore.

My one considerable criticism of Jaipur is that the online multiplayer is also apparently easy to ignore – very few people are playing on Android, and given the lack of options like automated matchmaking and friends lists, I can’t blame them. The clever Pass & Play mode (which has players tilting the device back and forth between them) fares better, though you should still consider this a solo play endorsement – when I want to play a board game with another human being, I’ll stick to the real thing.

When I want to play a quick and fun mobile game, however, Jaipur’s vibrant art and clever card play keep me coming back to the trading markets again and again, making it an easy recommendation.