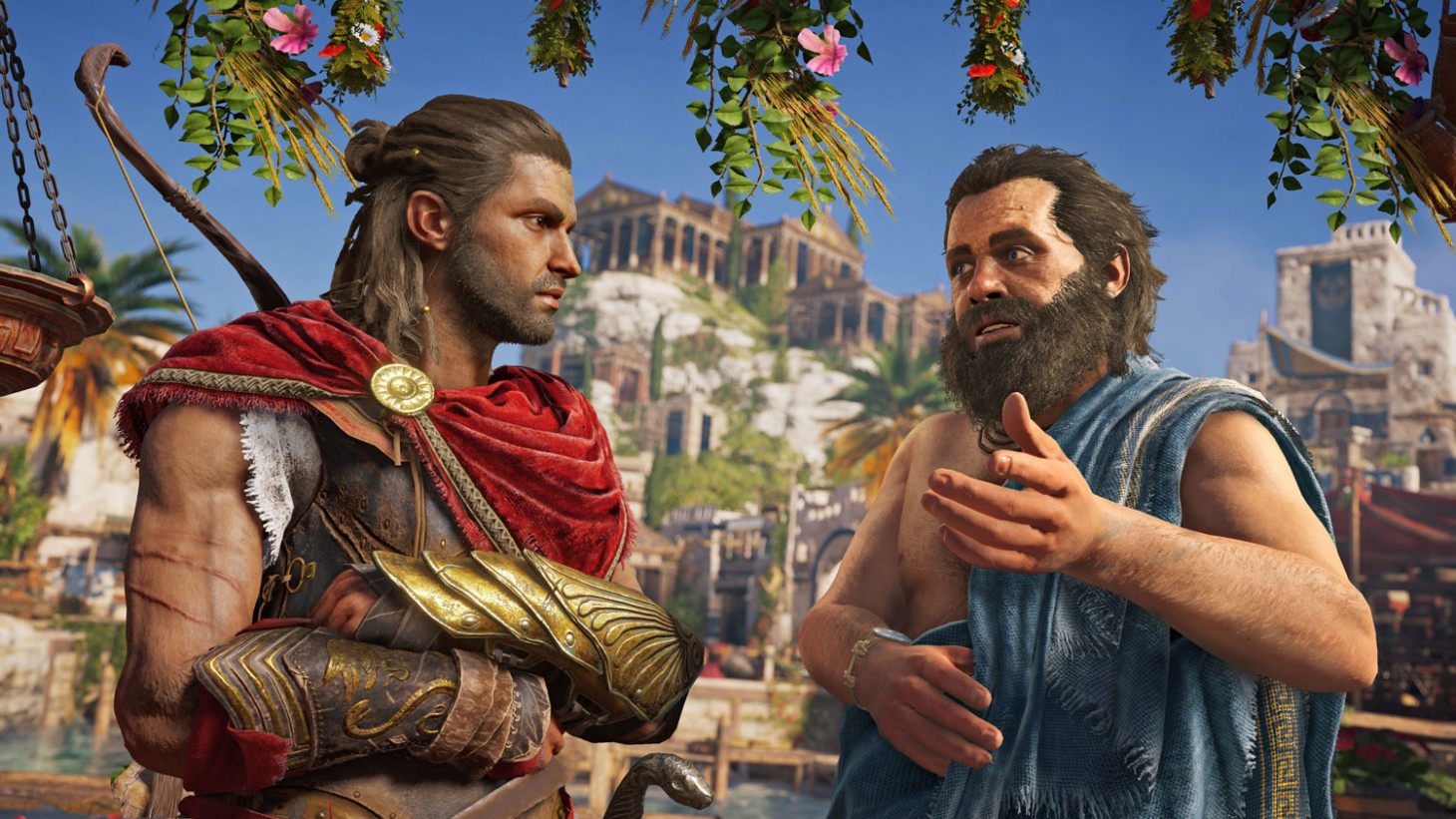 All throughout August, we’re updating our site with information about the game on our latest cover, Assassin’s Creed Odyssey. In addition to the 14-page print feature that subscribers can read, we’ve had in-depth features on mercenaries, a look at some of the gameplay loops you can participate in, and a blast of rapid-fire questions with the game’s director. Not everything we learn during our studio visit fits neatly into a larger feature, though. Rather than leave those little tidbits in the shadows, we’ve compiled some of the most interesting nuggets and are sharing them with you.

1. You’re going to get to know the historian Herodotus over the course of your journey. “Herodotus goes along with you on the main path for a while, and then he ends up on your ship and stays with you,” says Scott Phillips, game director of Assassin’s Creed Odyssey. Hold up. Who’s Herodotus again? “He is well known for recording the events of the wars and going around to different cultures so we have a better idea of who the Greeks were and how they lived and beyond,” says narrative director Melissa MacCoubrey. “He is very good at chronicling those. And then he has an entry about giant ants that mine gold.” Herodotus will even record your adventures, though it remains to be seen where they land on the spectrum between history and giant ants.

2. The player character was exiled as a child, and early in the game they learn that members of their family may still be alive. If you are able to reunite, it looks like there’s a possibility it could end well. “If you can recover your family members, they can join you on the ship,” Phillips says, referring to your vessel that acts as your mobile headquarters.

4. Odyssey is changing the way players interact with consumables, such as health potions and tools of distraction. Instead of crafting one-time-use items with materials, players can map abilities that function the same to face buttons, which operate on cooldowns. “Healing, we wanted it to be a little more upgradable and the smoke bomb felt better on an ability,” says creative director Jonathan Dumont. “There are a lot of places where you can spend money on in our game, and rather than spending it on consumables or looting them it felt better to have it in your toolbox.” 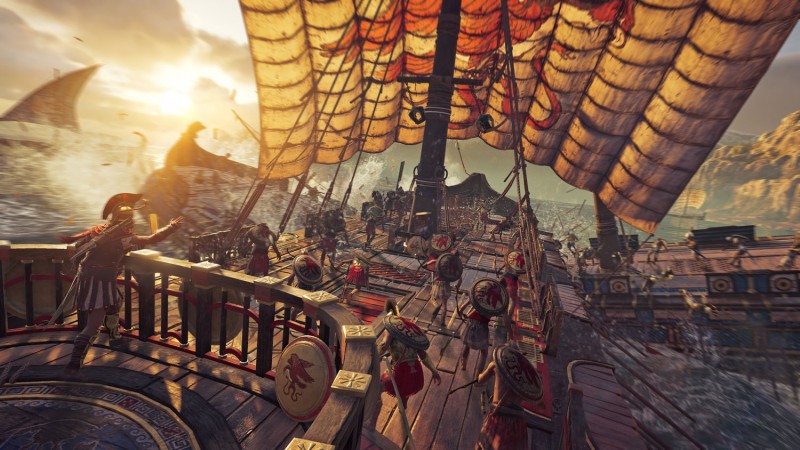 5. You don’t have to look at your helmet if you don’t want to. “You can toggle the headgear, so even if you’re wearing headgear you still get the bonuses even if you don’t see it,” MacCoubrey says. We knew this from our previous hands-on, but Dumont had a funny response when we asked about helmets with great stats that look goofy: “We have some of those. We have a few of those, actually, but I wear them because those are the ones I like. It looks like somebody puts a pan on my head, but I kind of like it.”

6. The world is almost entirely open from the beginning. “If you start the game and you say, ‘I want to go over there,’ you can,” MacCoubrey says. “They’re not blocked off. Somebody might kick your ass, but you’re not prohibited from going there.”

7. The game has enemy scaling, so players won’t run into the same issues that they did when Assassin’s Creed Origins launched. “You never burn a zone, come back, and it’s level 2 when you’re level 20,” Dumont says. “We have a system that will catch up, but never fully.”

8. There are 28 different city-states within the game, and each one has a different theme or overall feel. “Say we’re near Delphi, and it’s all about the gods and their reverence for the gods,” Dumont says. “If you move down here to Arkadia, it’s more about agriculture and you’ll start to have a different vibe. If you’re not interested in those stories, there’s other stuff to do and other places to go. If you’re super interested in those stories, then you have a lot to look at. If you go more toward Athens, then it’s going to be a little bit more about politics, science, arts, and philosophy.” Dumont says one area in particularly hilarious, though he wouldn’t elaborate.

9. History remains an important element of the series, which shouldn’t come as any kind of a surprise. Still, Odyssey’s historical setting is ripe for some interesting (and grim) story moments. “We did a lot of research as to how historical events played out, and those events are depicted as accurately as we can find out,” MacCoubrey says. “It was very important for us to keep them that way. An example would be the plague of Athens happens during our time period. We do a lot of research about what happened during the plague, how the plague started, who was there in Athens at that time, what were the rumors about it, that kind of thing, and then depicted it that way.”

10. Sokrates has been given special attention. “We knew he couldn’t feel like any other quest giver. He’s Sokrates,” MacCoubrey says. “He’s probably our most famous character that we have. He needed to be special. If you want to engage and go down the rabbit hole with him, he is very happy to do that, and if you want to tell him, ‘Man, I’m not here for this,’ he also responds to that. He’s a little unphased by it, but he’ll get you to try to do it anyway.”

11. Your character struggles with their place in the world – and their abilities. “You get to play with one of the themes that we have in the game overall, which is the idea of a Greek hero,” MacCoubrey says. “That idea of the fact that you stand out from the rest of the crowd in being a fairly mighty warrior with an eagle that people think is the eagle of Zeus. That inner conflict that Kassandra and Alexios have about ‘Am I special, or am I just a person? Where do I fit in this world?’” 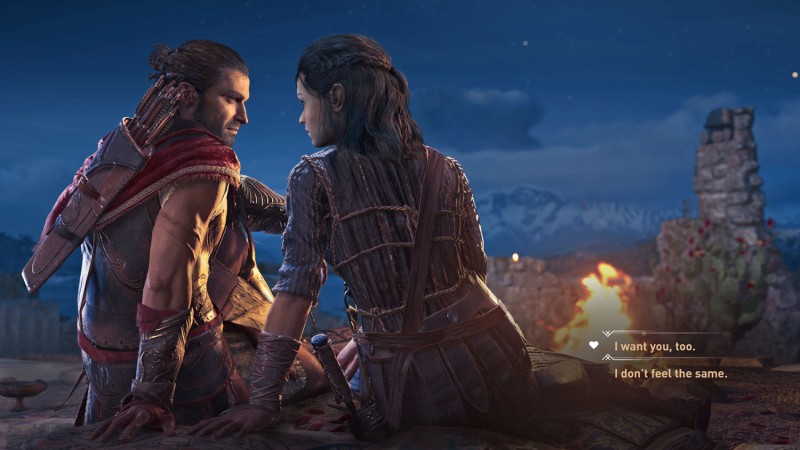 12. Player choice is a big part of the game, and more than 30 hours of interactive cutscenes have been incorporated into Odyssey. If you aren’t particularly into story, well, that’s a choice, too. “As a narrative director I would be lying if I said that I didn’t care if people didn’t resonate with story and didn’t want to experience story, because I think that story is very important to establish a connection between the player and the game,” MacCoubrey says. “But I do understand very much that for some people, story is something that they don’t want to get invested in. So we do accommodate players in the way that, yes, they still have to interact with dialogue in order to progress through the story, but you can skip through dialogue as you’re going through. There’s always a push-through option to make sure you can get through dialogue and you can skip through cinematics.”

13. Weather is dynamic and beautiful (if you don’t mind getting wet). “As you travel around you’ll come across different atmospheres and you’ll hit some places that are foggy, some places that are rainy, some places that are stormy, because we have reintroduced a full weather system into Odyssey,” says world director Ben Hall. “So you’ll see the sun-bleached skies, but you’ll also see the thunderstorms on the ocean and the waves and everything. It’s pretty dramatic and pretty cool, and it all happens dynamically.”

14. With Origins, Ubisoft Montreal shifted away from the reactive, counter-focused combat from previous Assassin’s Creed games in favor of a more aggressive, action-based system. Phillips says the fact that your character has a First Civilization artifact in Odyssey changes combat even further. “You have the spear of Leonidas, which allows you to parry, you’re going to be parrying much more often, but we wanted you to be dodging, rolling, moving around the fight much more often than you might have in Assassin’s Creed Origins. The pace of the combat is a little bit quicker, you need to be a little more reactive within the fight at the core.”

15. Players square off with several different factions in Assassin’s Creed Odyssey. “We’ve got the Spartans, which are sort of the more crazed, up-close dangerous fighters,” Phillips says. “They will go berserk and do more damage when they get low on health. We’ve got the Athenians, which are a bit more tactical. They will use archers and shields. Bandits will be ever present, attacking everyone, and they use quick get in, get out, move fast and get away tactics. And then we have what we initially called micro factions.” The Daughters of Artemis follow the goddess of the hunt, and they see themselves as protectors of animals, using pets like bears to keep forests safe. The Followers of Ares are a crazed cult that does the opposite, sacrificing animals in the name of the god of war. “They’re really nuts to fight,” Phillips says. Then there are the Cultist Guards, who Phillips says are the best trained, best geared and toughest soldiers in the world. They seem to be of particular interest – there’s a tab devoted to them on the menu.

Assassin’s Creed Odyssey is coming to PlayStation 4, Xbox One, and PC on October 5.