The revival of the isometric CRPG is well under way, with games like Divinity: Original Sin 2, Torment: Tides of Numenera, and Pillars of Eternity 2 helping to chart a new course for the genre. Those games recalled the classics, but often moved past many of the more “fiddly” elements that could sometimes ward people away.

Pathfinder: Kingmaker recently released on Steam, and it’s clear that developer Owlcat had a different vision in mind. The new game is religiously loyal to the Pathfinder game system it’s based on (which itself is strongly based on the 3.5 edition of D&D), and it’s willing to focus on things like random encounters, guard shifts during camp sequences, and even encumbrance, all factoring in as significant factors you must consider. That level of specificity and detail may be a turn-off for some players, but other old-school RPG players may embrace the nostalgia.

In addition, Kingmaker features one very significant innovation, providing the option to rule a barony and make decisions about how it grows. By growing a town and its surrounding territory, Pathfinder: Kingmaker offers a greater ownership over the game world than many other role-playing releases.

Check out our brief video overview above to see if the game might be for you! 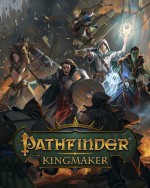