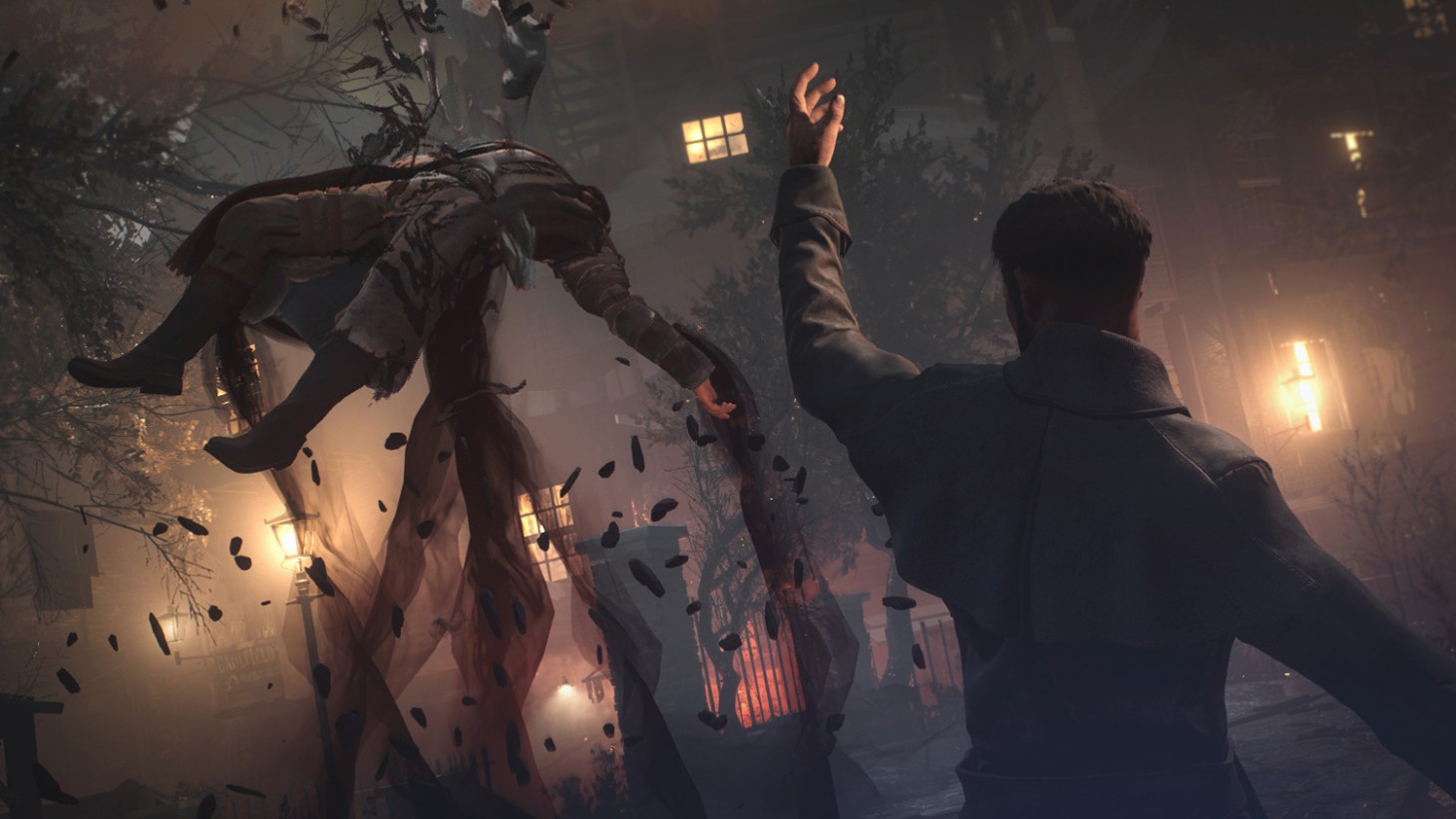 When I was a kid, I tried assembling a model car. This was back before “Nailed it!” was a meme (and before the internet in general), but I remember being disappointed by the disparity between the picture on the box and my final result. Compared to the idealized image, my car was lopsided, painted poorly, and glued together in the wrong places. This memory came back to me several times while playing Vampyr. Dontnod’s gothic action/RPG has conceptual components that could have been assembled into a great open-world vampire experience, but they weren’t. The gulf separating that perfect vision from the flawed reality is ever-apparent, and admirable ambitions can’t atone for clumsy execution.

You play as Dr. Jonathan Reid, a recently transformed vampire who must balance his need for blood against his desire to help treat London’s Spanish flu epidemic. The grim atmosphere is well-crafted, with evocative music punctuating your trips down foggy and deserted streets. You explore different parts of London, meet the residents, and fight beasts and hostile humans. The unique premise is Vampyr’s biggest strength, putting players in the position of a morally upstanding character who has to wrestle with immoral impulses to hold a crumbling world together.

Despite an intriguing narrative backdrop, a meaty chunk of Vampyr’s gameplay involves a clunky third-person combat system. Keeping an eye on your health, stamina, and blood (i.e. mana), you fight a too-small selection of enemy types like vampire hunters and zombie-like skals. You can also invest in various vampire powers, like a bloody claw slash or a blood shield that absorbs damage. These expand your options, but not enough; encounters are repetitive and the mechanics are functional at best, and battles never settle into a sweet spot because the action fluctuates wildly between too hard and too easy.

The team at Dontnod made it the player’s responsibility to tune the difficulty through their choices, which creates major problems. If you want to get stronger and unlock more health, stamina, and vampiric abilities, you need to drink blood for XP. The only significant source of blood is civilians (all of which are named and have dialogue), and when you kill them, you are locking yourself out of potential side missions or story content. This choice is interesting in theory, but punitive in practice because the things you’re weighing feel mismatched. One is narrative and one is mechanical, so you don’t get the fun of seeing different-but-equivalent paths unfold.

Considering how brutally difficult combat becomes if you elect not to feed, all but the most hardcore players need to kill to improve their stats. To make each sacrifice count, you must get to know your victims to maximize the richness of their blood. This fascinating idea occasionally makes you feel like a twisted predator; you help people, heal sickness, and build friendships all to make your ultimate betrayal as bountiful as possible. However, the process of talking to people and interrogating their friends to get clues feels mechanical. I got so sick of the back-and-forth and fetch quests that I eventually just did a sweep of London and murdered every civilian I could in a single night. Districts collapsed, innocents died, and my bad ending was assured, but I got a ton of XP to spend on powers that made every battle thereafter a breeze.

Vampyr’s attempts to let you forge your own destiny are ultimately unsatisfying. Though you can make decisions in dialogue trees, the game doesn’t respond to those choices in interesting ways. How you deal with the community pillar in each district has the most noticeable repercussions, but the game doesn’t provide a clear sense of what the outcomes might be. For instance, I unknowingly lost my opportunity to get an important treatment for other citizens by drinking the blood of a rogue nurse. I later learned that the optimal choice in these scenarios is to let the characters live – in which case, offering the decision seems pointless.

Vampyr is also riddled with basic technical problems like long loads, odd collision, and stilted animation. The rough edges can tap into a similar appeal that I find in games like Deadly Premonition or Earth Defense Force, but they are also frustrating – especially when the whole game crashes at critical moments. Nothing that Vampyr provides makes it worth putting up with these problems, or any of the other issues plaguing the game. Through the fog awkward mechanics and unsatisfying decisions (not to mention some dumb story twists), the fun and intriguing core of Vampyr is sometimes visible. Unfortunately, that fog lifts only rarely, leaving most of the experience shrouded in darkness. 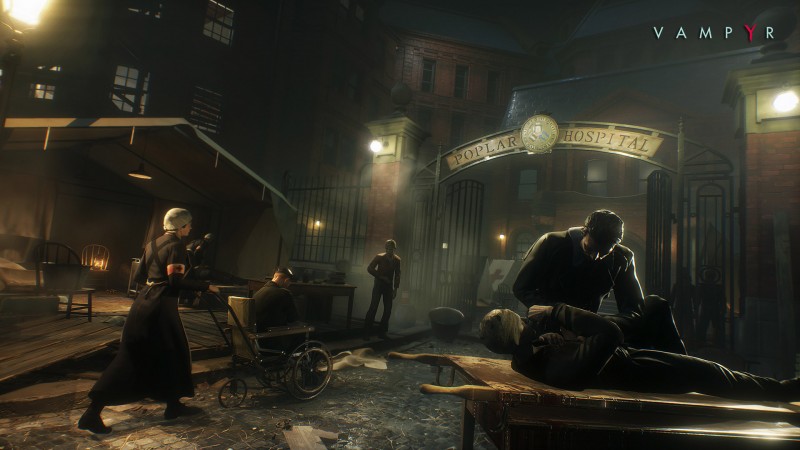 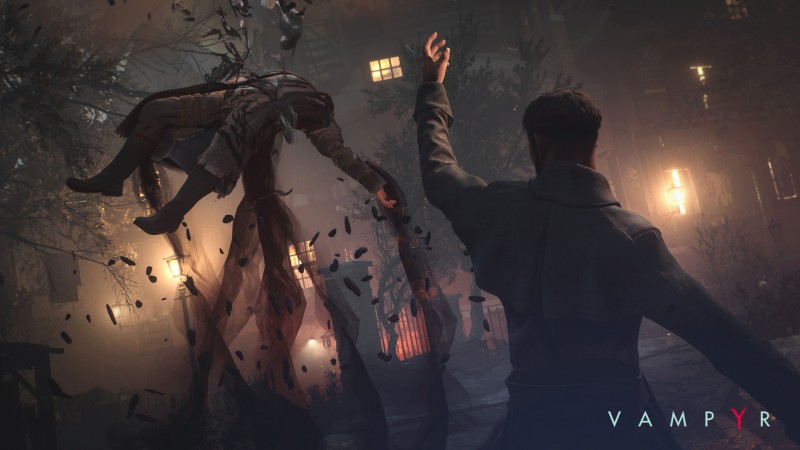 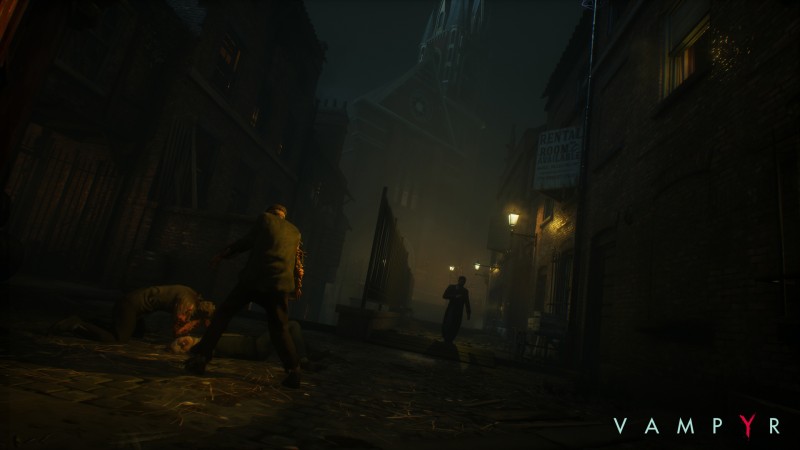 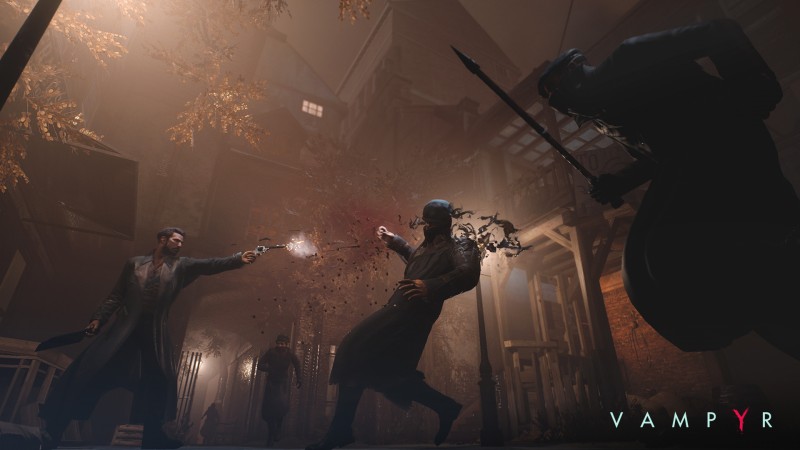 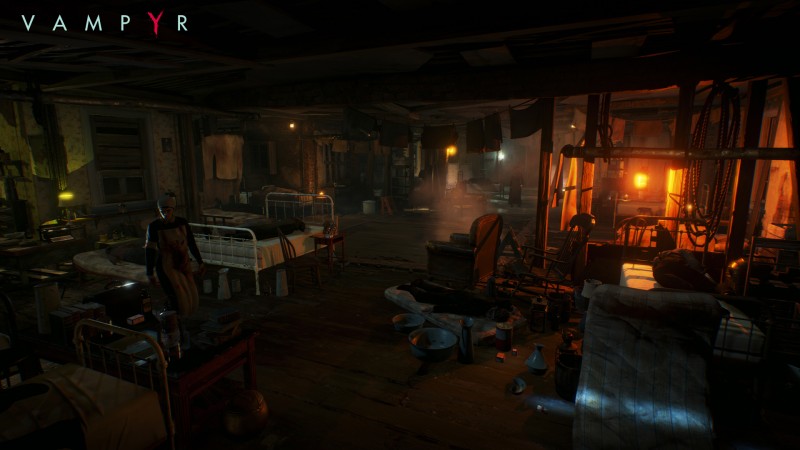 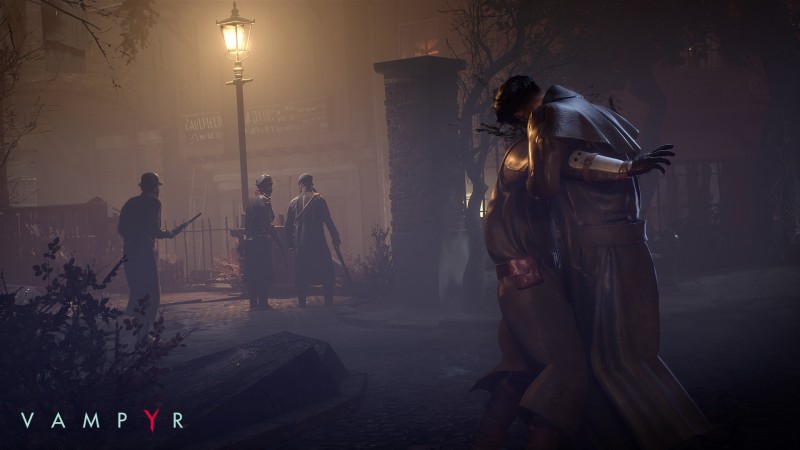 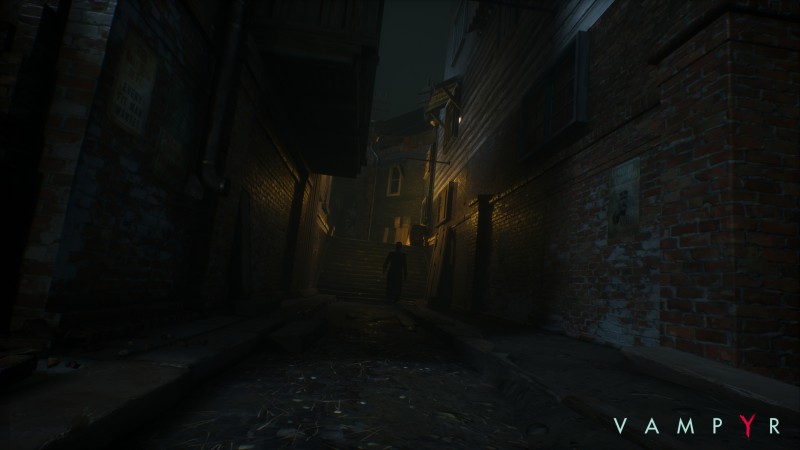 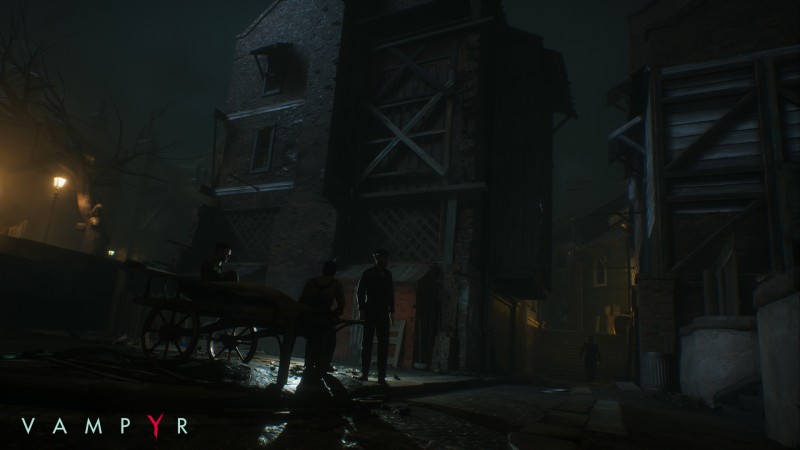 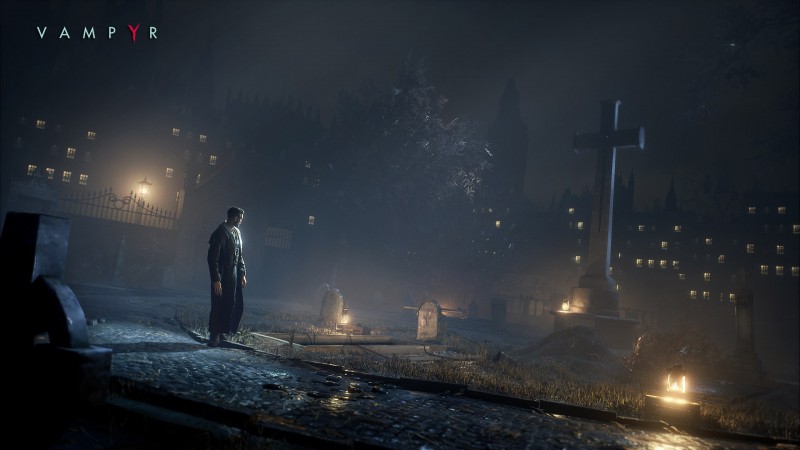 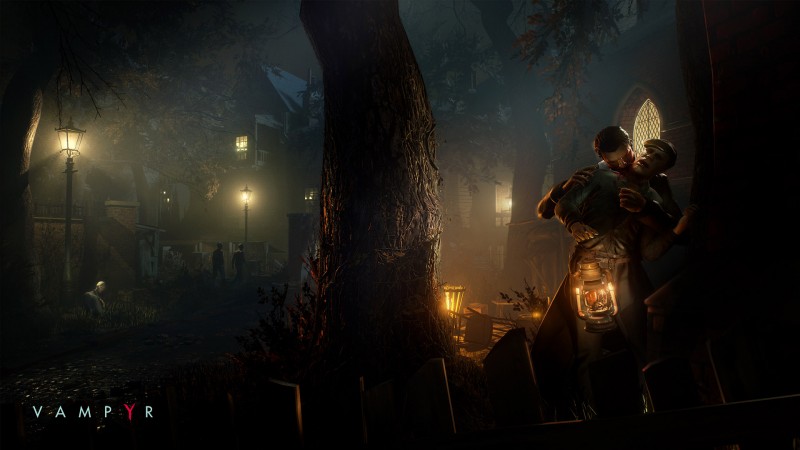 6
About Game Informer's review system
Concept
Explore London in the early 20th century as a vampire doctor, and make decisions about who lives and dies
Graphics
The visuals have a distinctly low-budget feel, from the outdated character models to the stiff animations
Sound
Excellent atmospheric music, and good voice performances – but the latter is wasted on dull characters
Playability
While the controls technically work, they never reach the point of feeling good or satisfying. A bunch of technical issues also make Vampyr hard to enjoy
Entertainment
Vampyr attempts to deliver a gothic fantasy, and while it has bright spots, too much goes wrong to let them shine through
Replay
Moderate